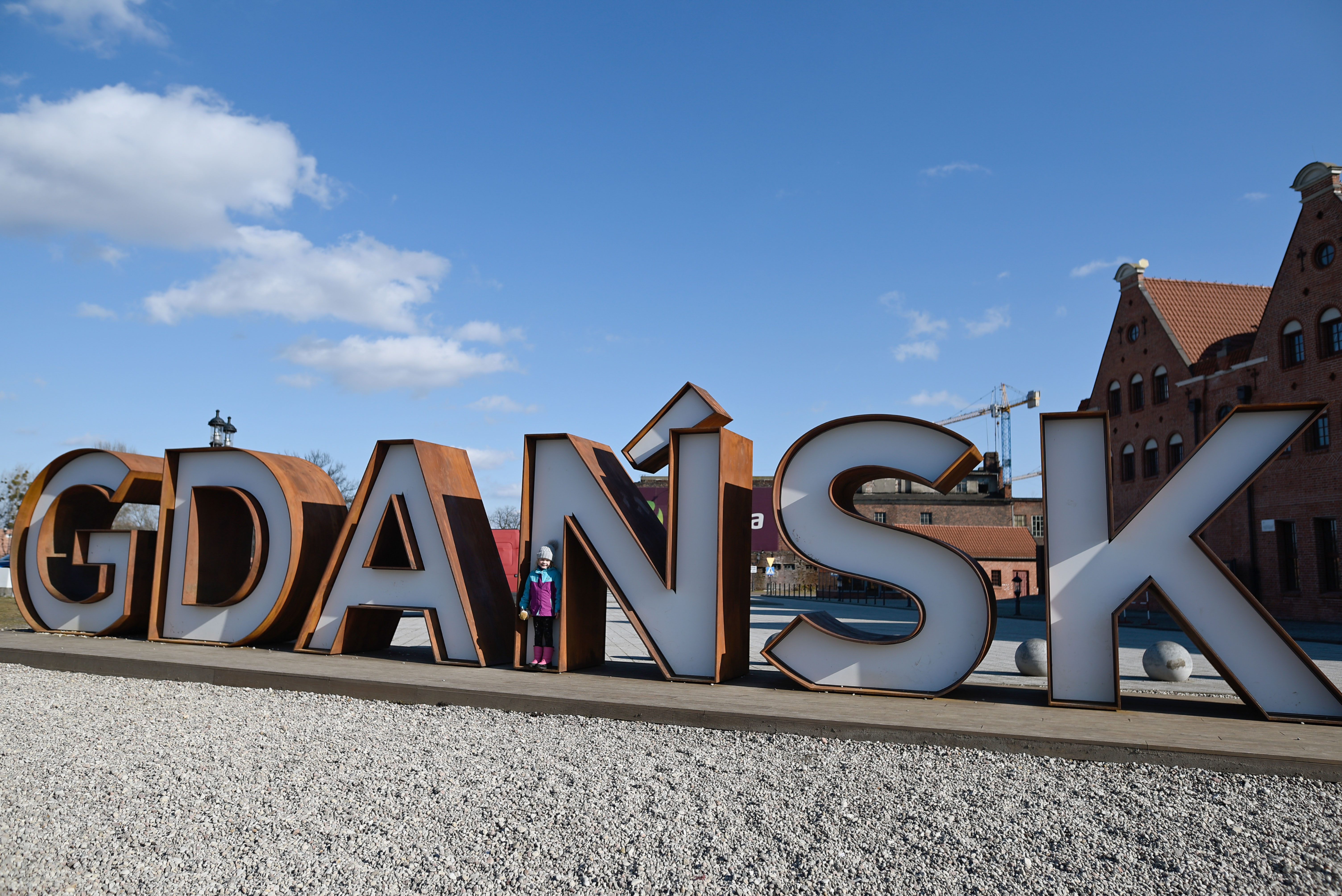 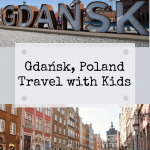 One of the countries I have been wanting to bring Milana to was Poland.  I was born there and wanted to show her where part of her family came from. We still have lots of family there (my dad and many cousins, aunts, etc. still live there) but we didn’t visit them on this short trip.  Gdańsk is less than an hour flight from Copenhagen, so it was the perfect 3rd destination to our European adventure.  We flew SAS on Easter Sunday and the airport was deserted!  When we got to our gate, I thought we had the wrong one because there was no one there.  To my surprise, there were only 2 other people on our flight that day, so we had the whole plane to ourselves! 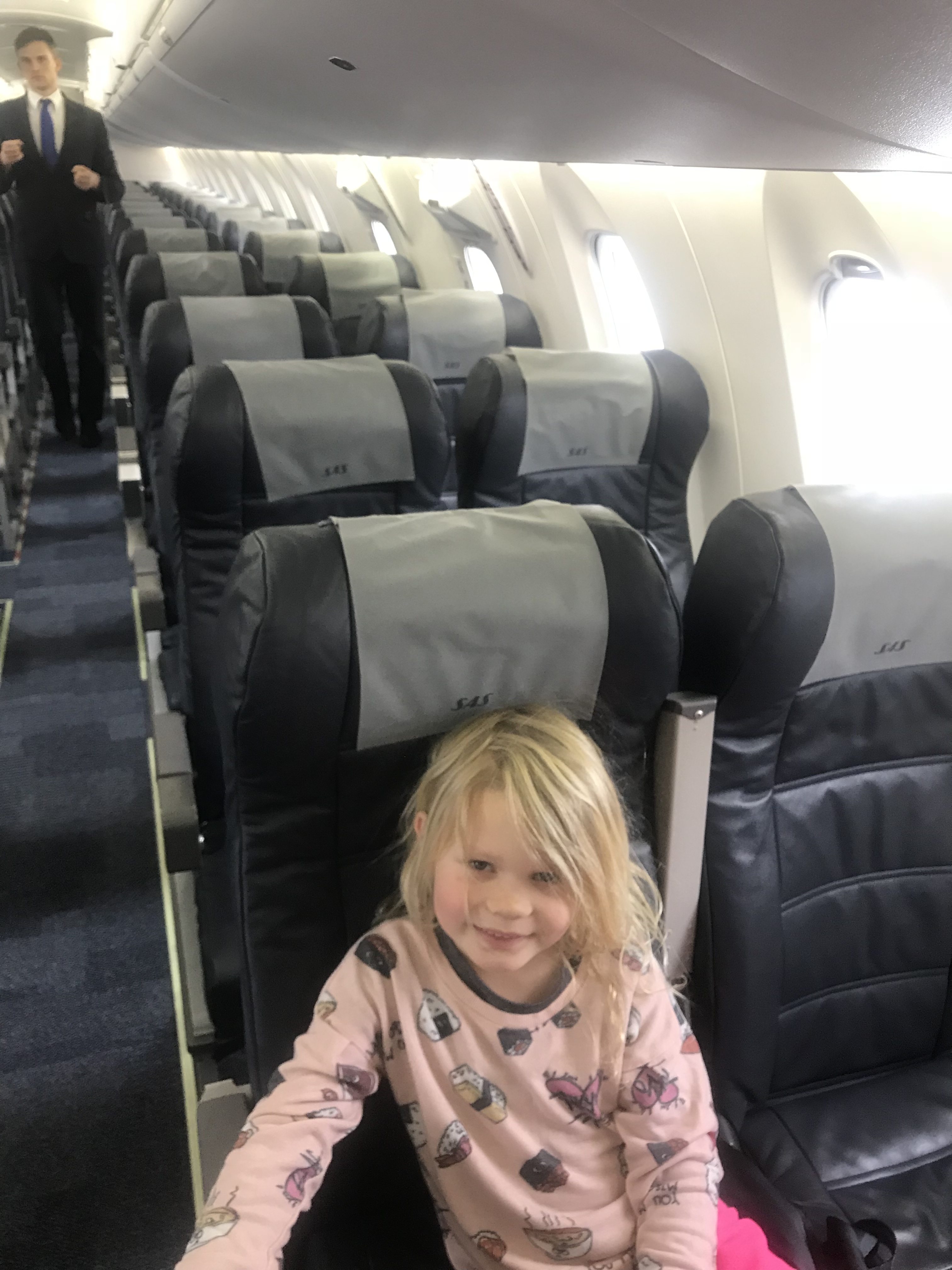 The GDN airport has a play area, but we didn’t go to it because Milana wanted to visit the lounge.  There was no one at the lounge when we went and they had an awesome candy buffet, with all my childhood favorites. The food options were limited here, but we weren’t really hungry and just wanted to stock up on water bottles for the plane ride to Stockholm. 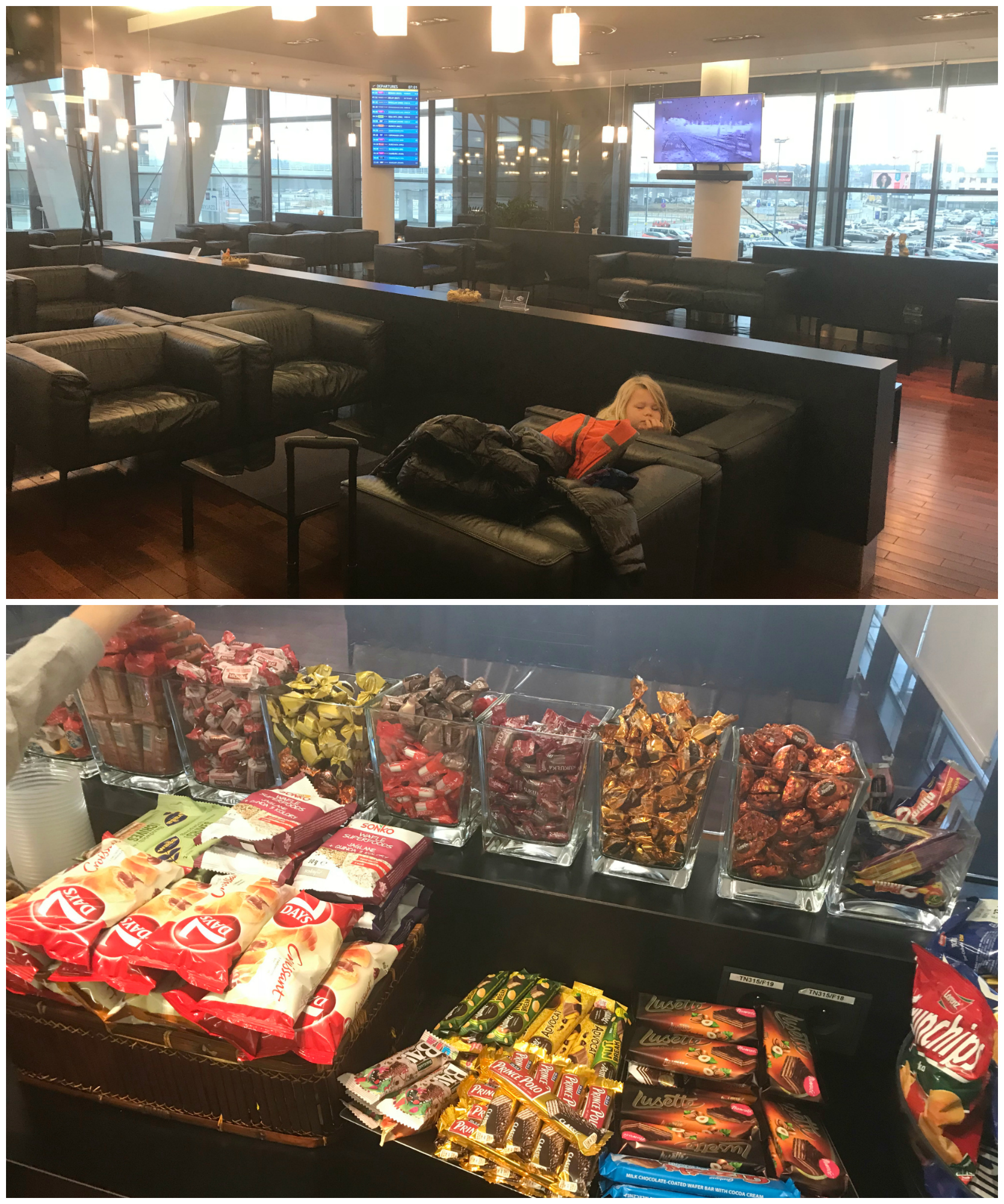 We arrived in Poland early on Easter Sunday.  Being a very Catholic country, pretty much everything was closed that day and many things were closed the following day as well.  We had 3 full days to explore and didn’t waste a minute!

WHERE TO STAY IN GDAŃSK WITH KIDS

I used points for the Hilton, which was in a great location.  Right on the waterfront and a quick walk into the Old Town area.  Just like in Stockholm, they brought us some chocolates and wine as a thank you for being gold members. 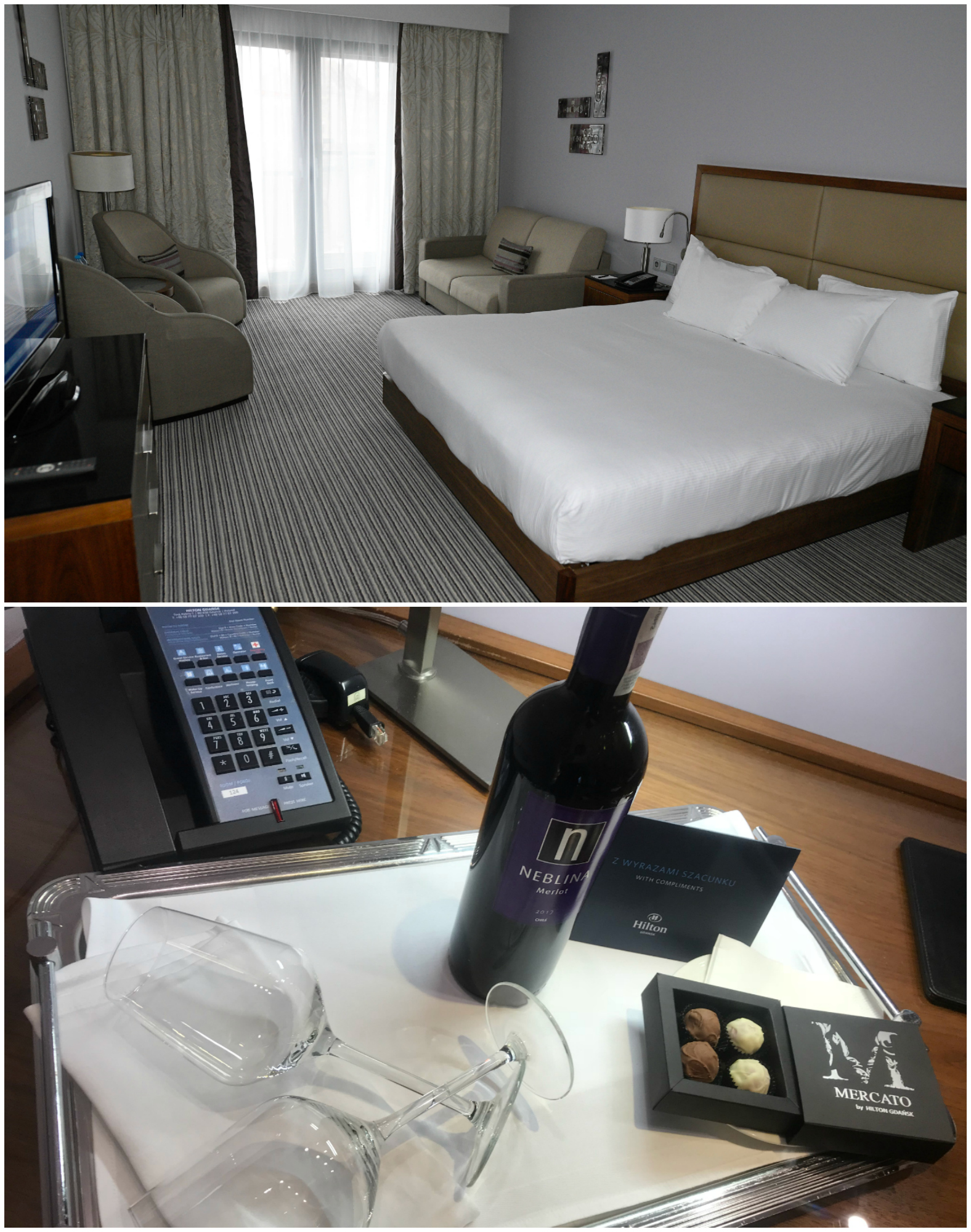 Across the bridge from our hotel, was this giant Gdańsk sign, so we walked over to get some photos.  It turned out the letters are better than a playground, Milana played and climbed for almost an hour!

GETTING AROUND GDAŃSK WITH KIDS

From the airport, we took a cab to our hotel.  Uber does exist in the city and we used it for pretty much everywhere else.  Uber is super cheap in Poland, a 20 minute drive cost under $5!  They do have trams and buses, however with Uber being so cheap, there was no reason to use them.  Just like in CPH and Stockholm, they wouldn’t pick us up unless we had a car seat. I had my mifold, which fit into my backpack, so we were good to go.  We also walked a ton since many attractions were right near our hotel.

THINGS TO DO IN GDAŃSK WITH KIDS

My main reason for coming to Poland was to show Milana a part of the country, eat some good food, show her the culture and introduce her to some of my favorite treats so we didn’t have a huge list of things to do.  We walked to the Old Town area every day, it’s super cute with lots of stores, restaurants and cafes to explore. 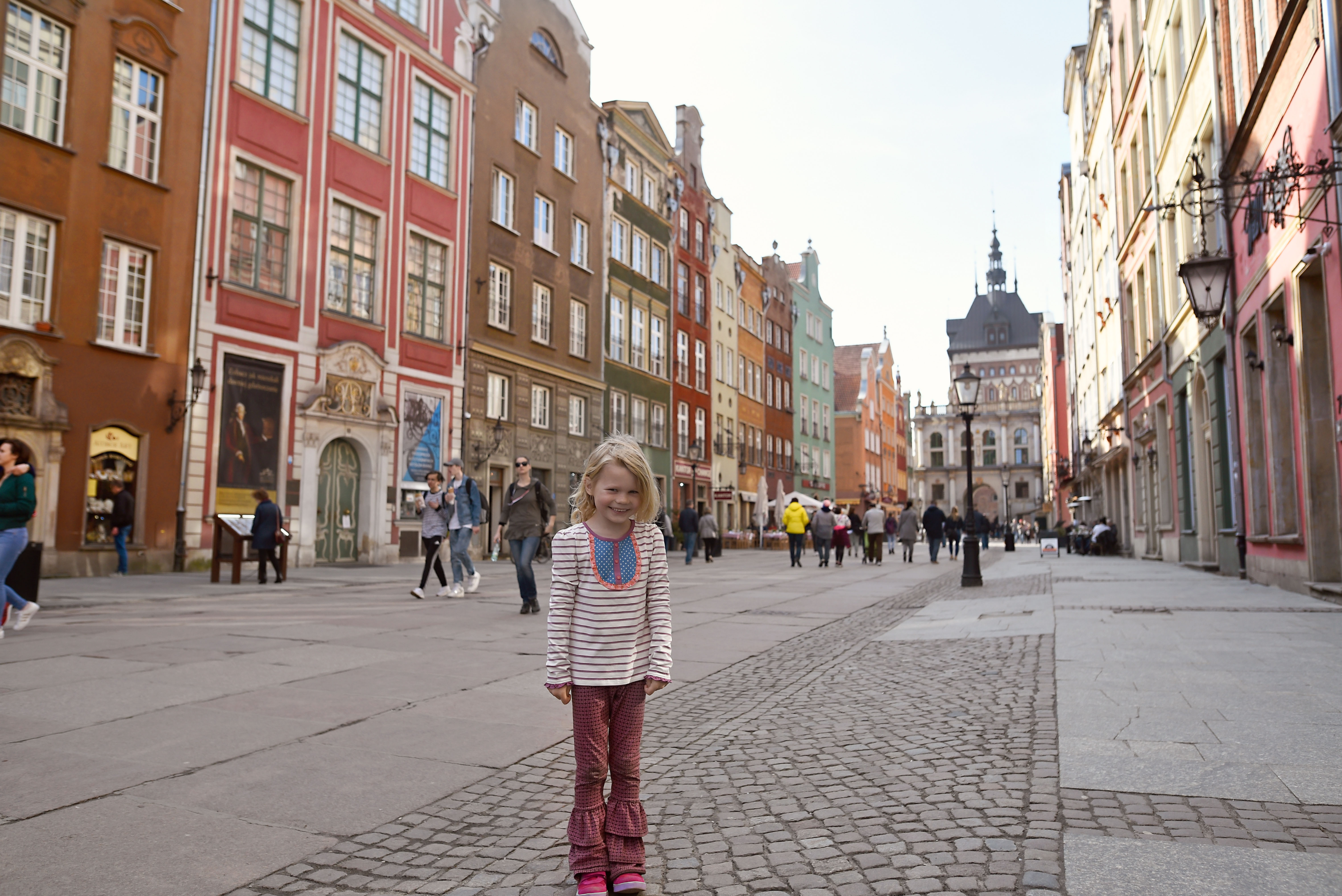 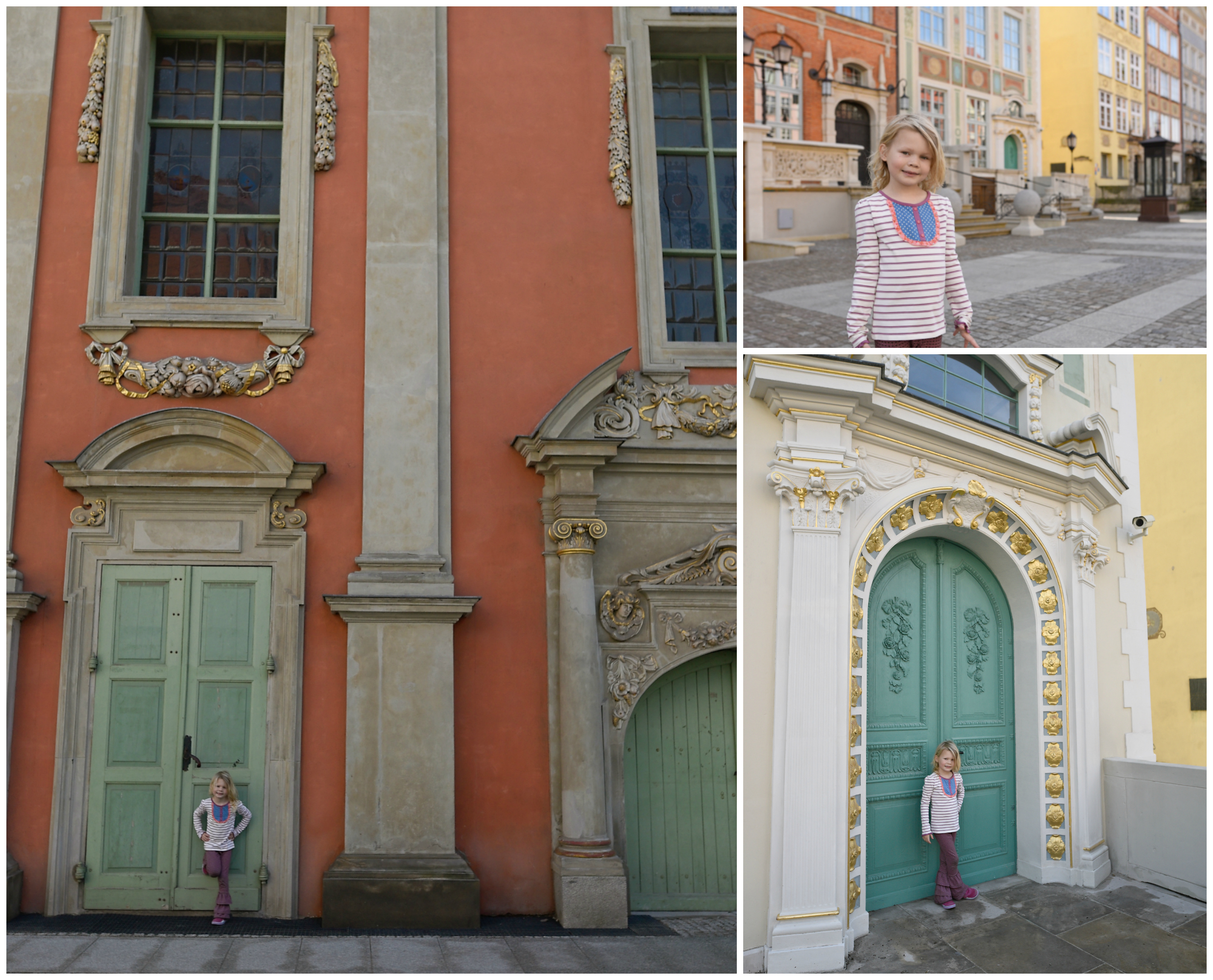 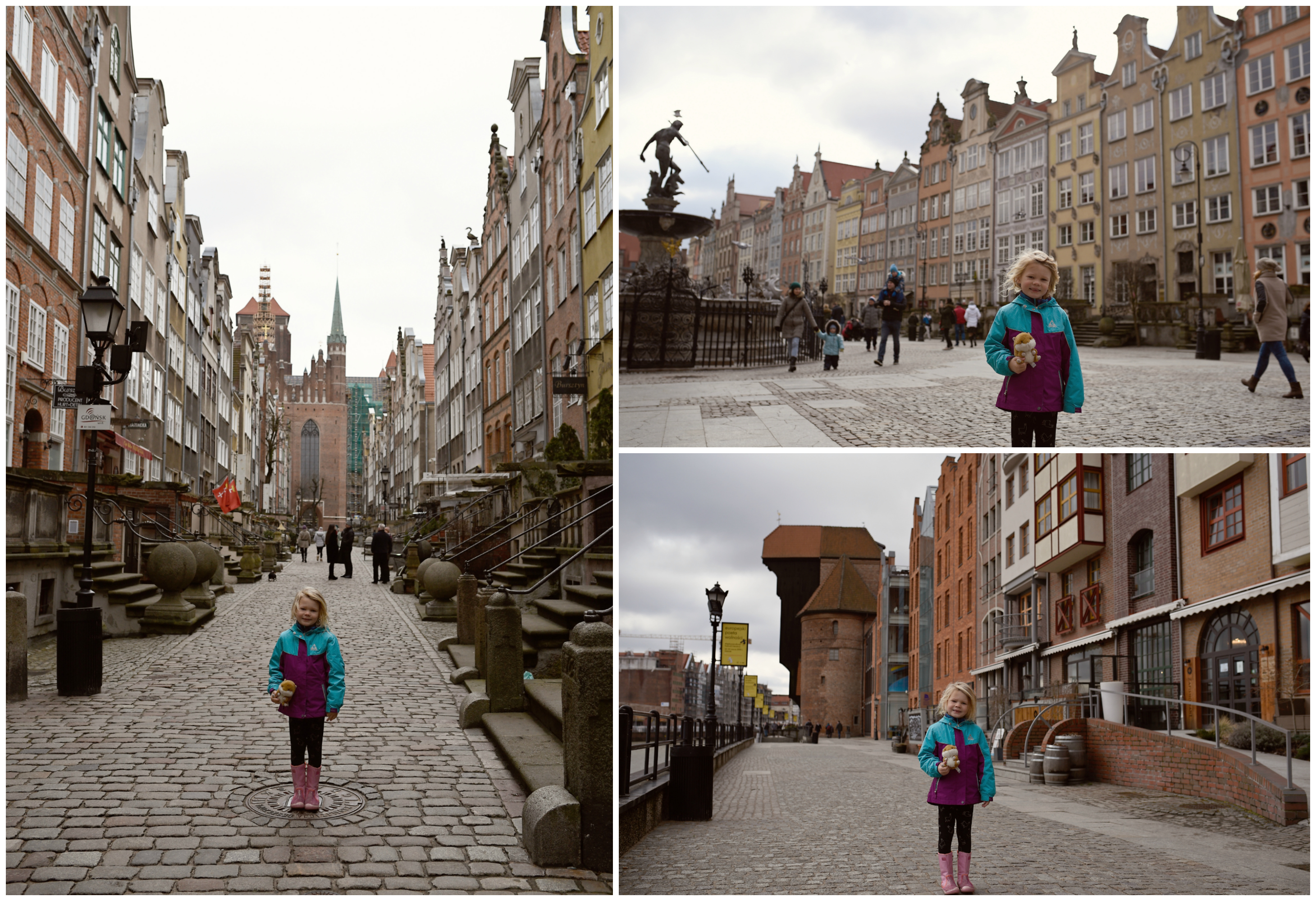 Want to see some aerial shots of Gdańsk? Check out these awesome photos from GeoBeetles!

On a day when everything else was closed, Loopy’s World (an indoor playground) was open so we headed there for a little bit.  She had fun playing for a couple of hours and made some new friends. 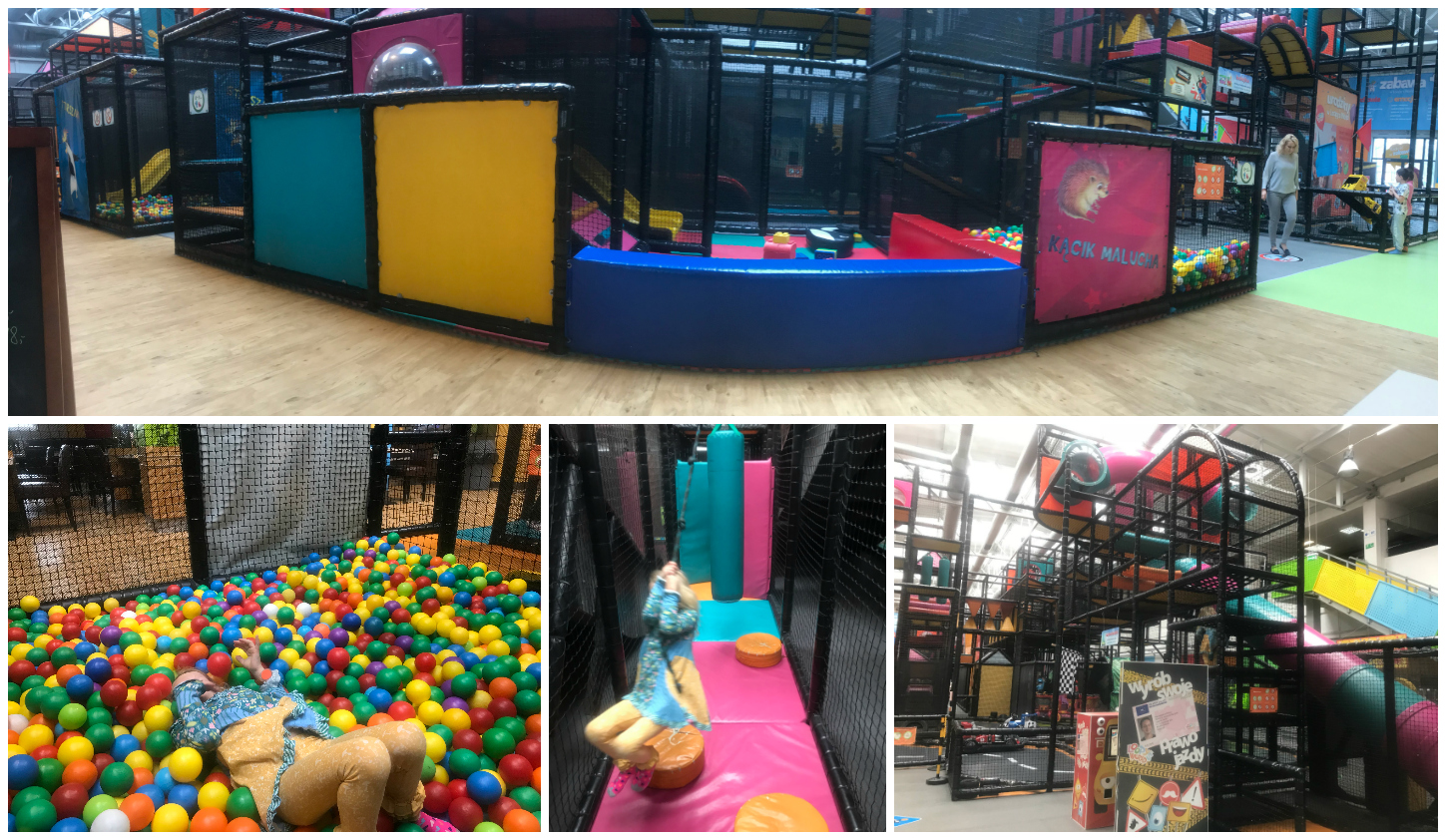 Gdańsk also has a small zoo that’s super cheap (less than $5) to get in. In the summer, the cost goes up to around $8, still a bargain!  The zoo has wide paths and is very stroller friendly if you happen to have one. 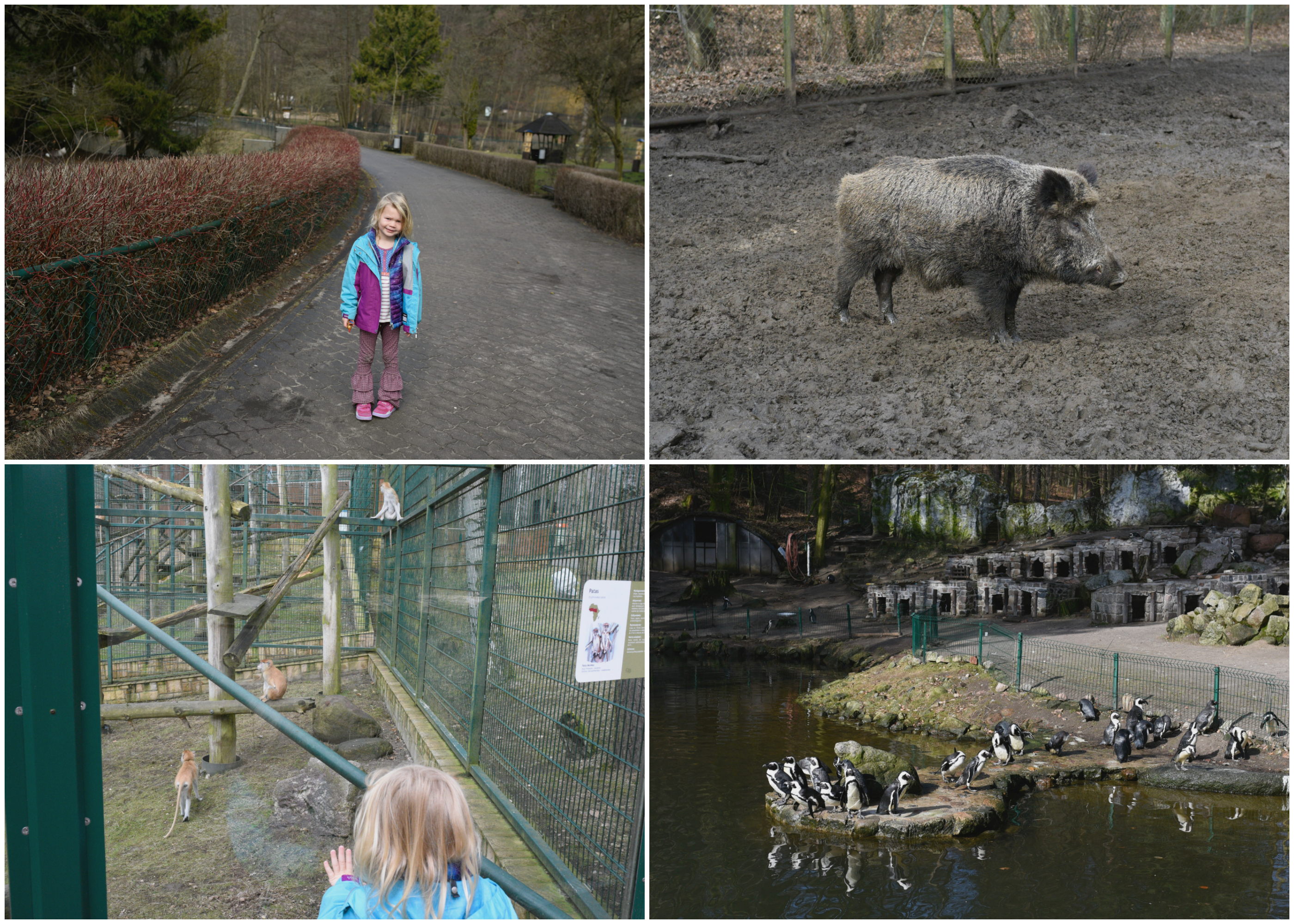 One of our favorite things in Gdańsk was the Centrum Hewelianum. This is an interactive science center in the most awesome setting you will ever see.  The buildings are 19th century forts and each one had different exhibits.  It was super fun to see them all and walk from building to building. While this is interactive, I’d say it’s best for kids who are at least 5 and up.  Come in the late afternoon like we did, after the school groups leave and you will have the entire facility to yourself!  It was so cool to see all these modern exhibits in this setting. 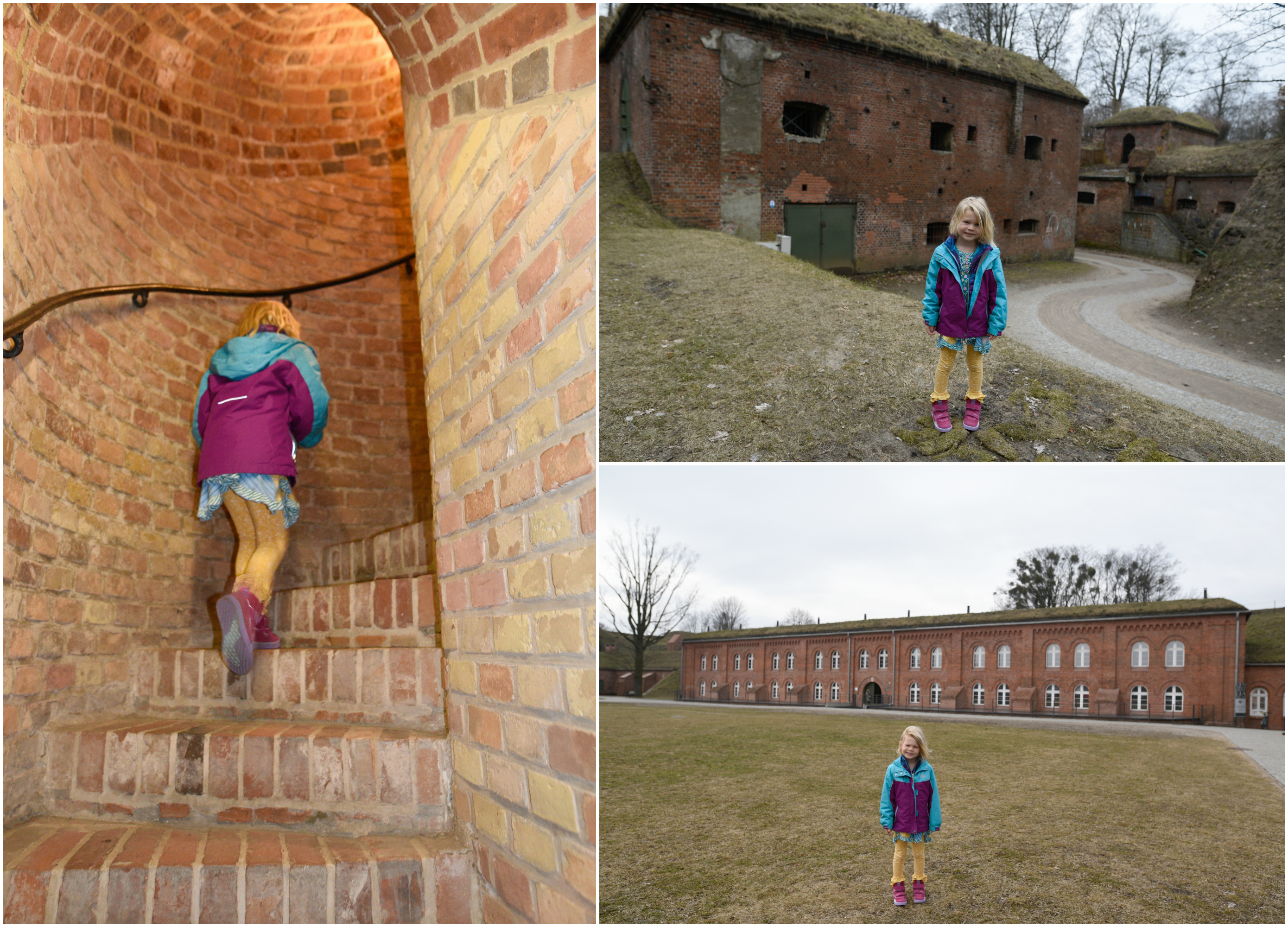 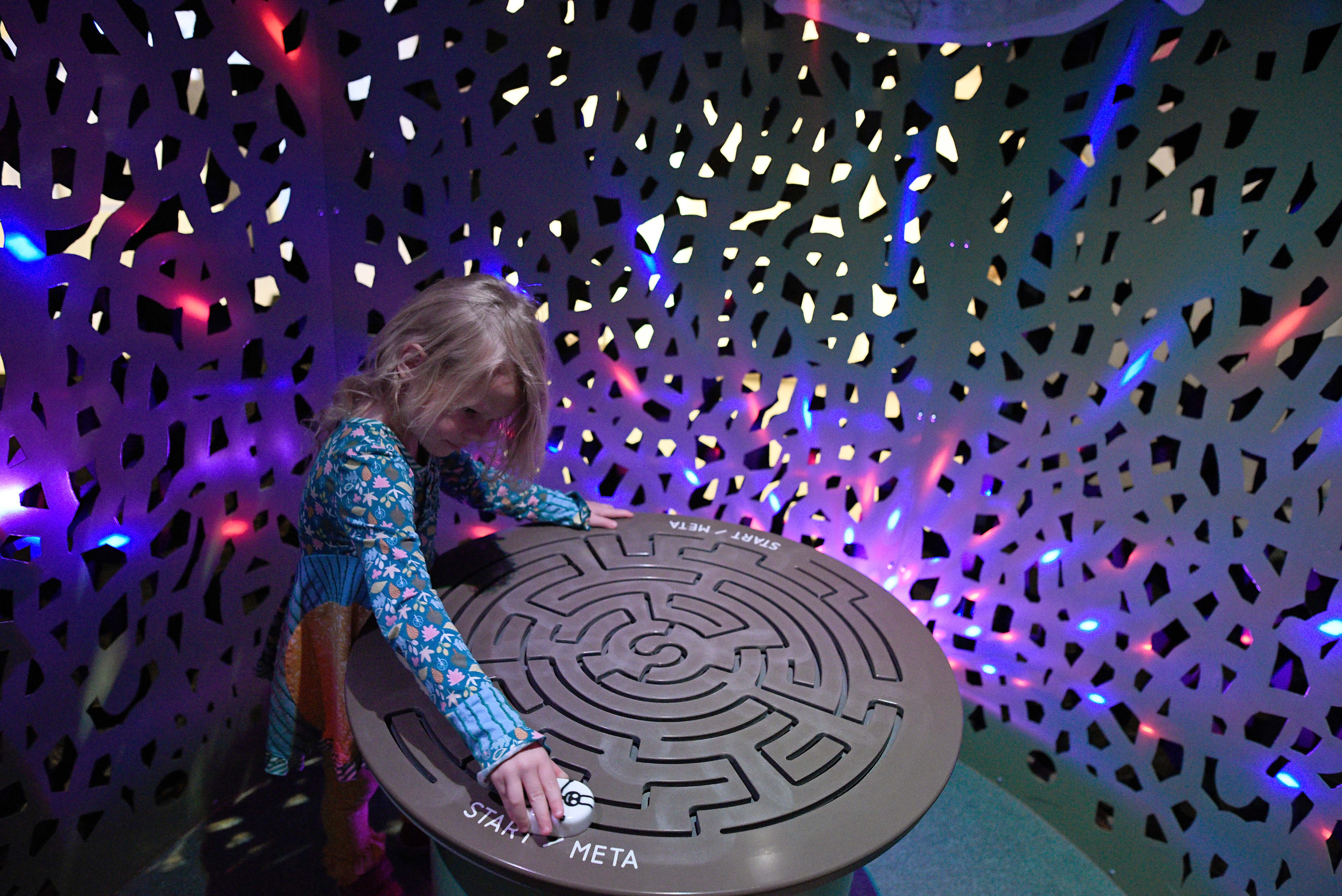 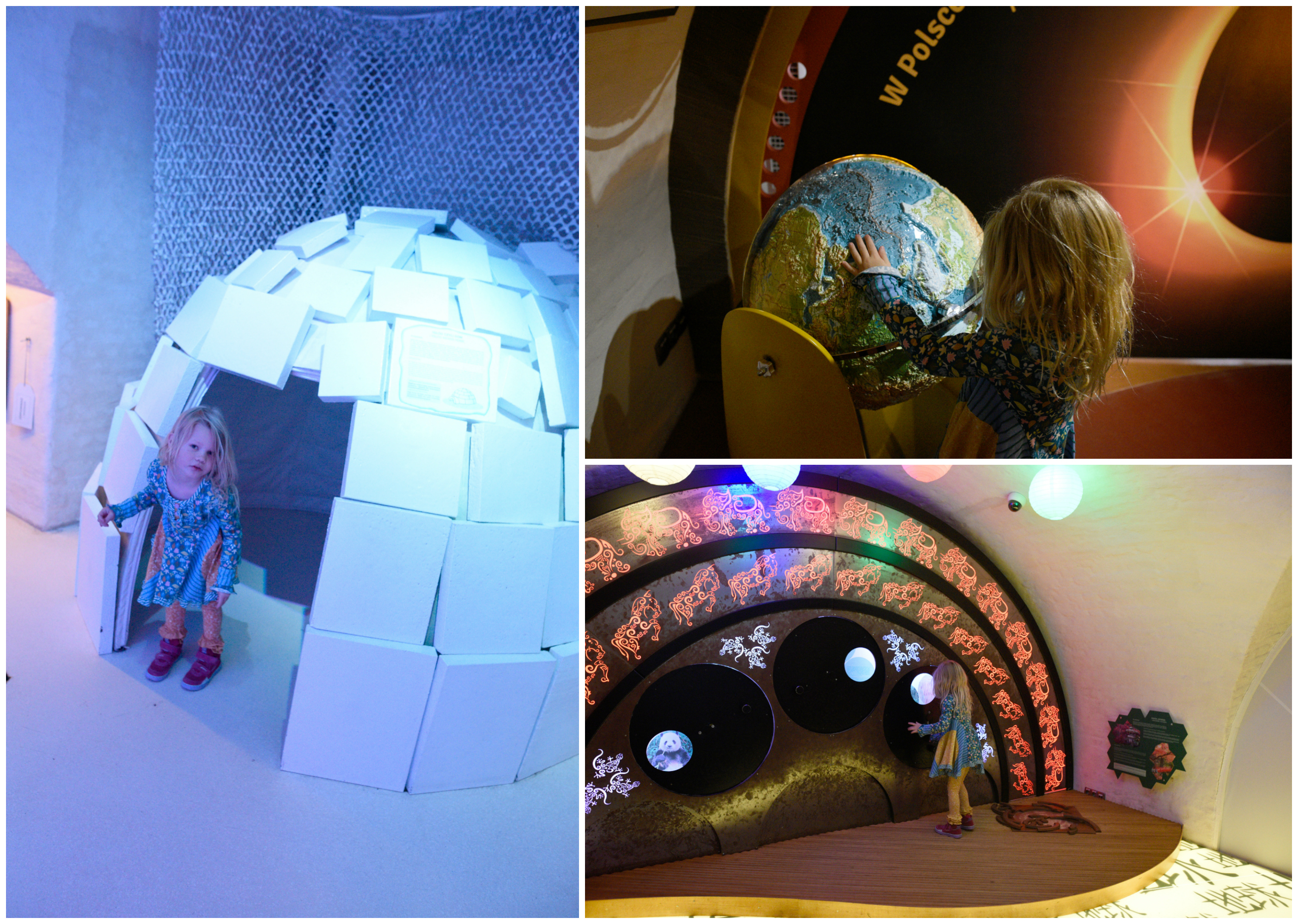 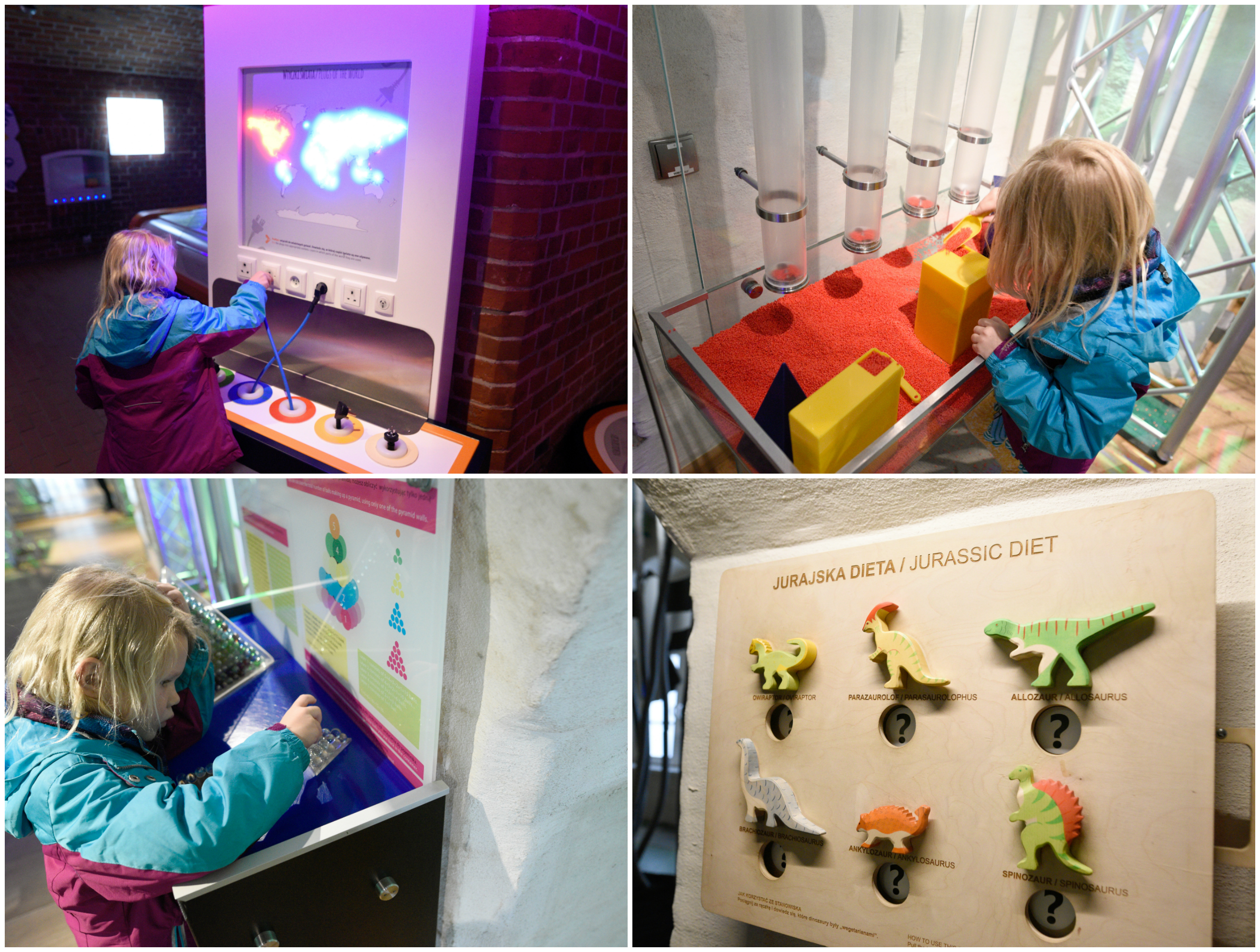 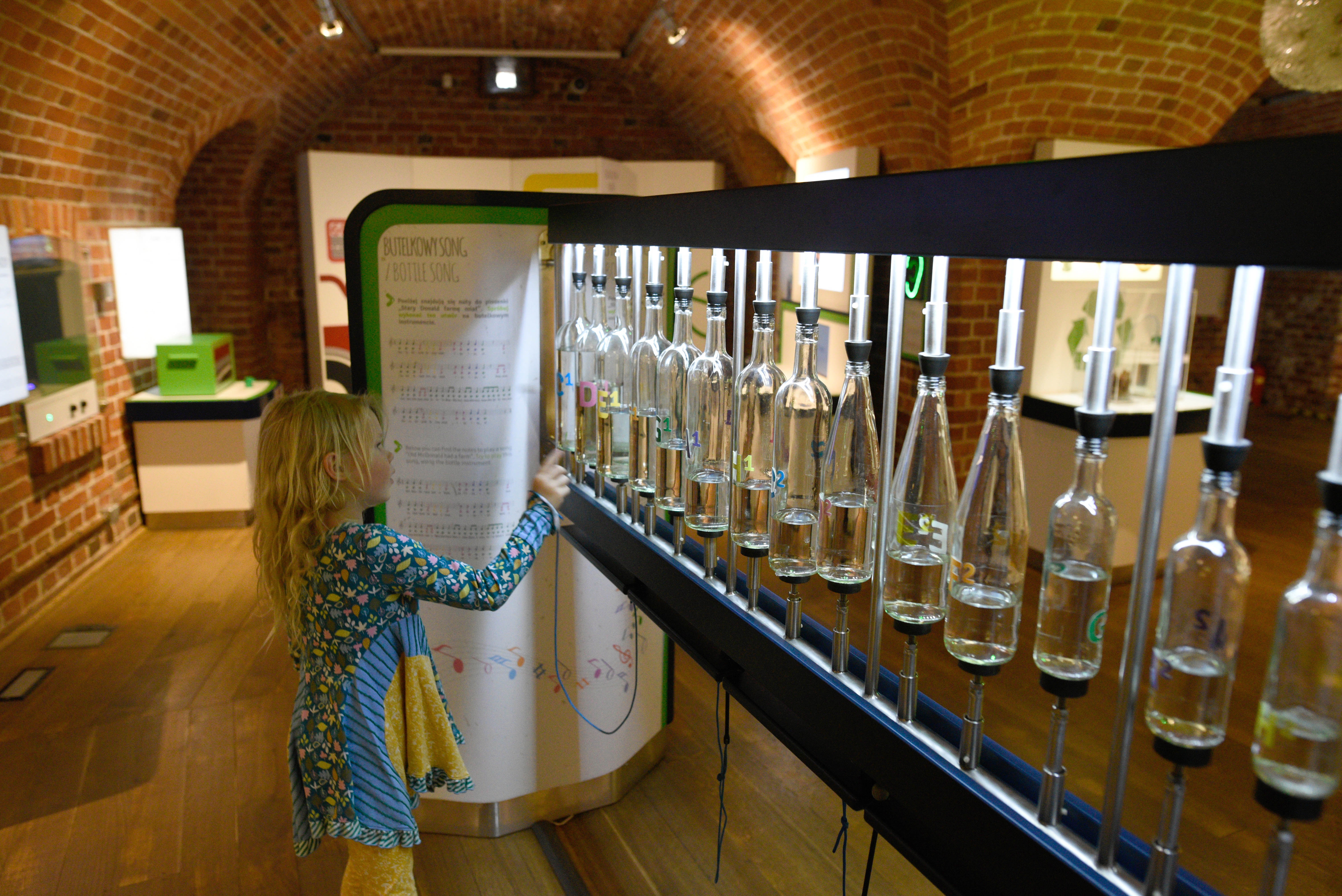 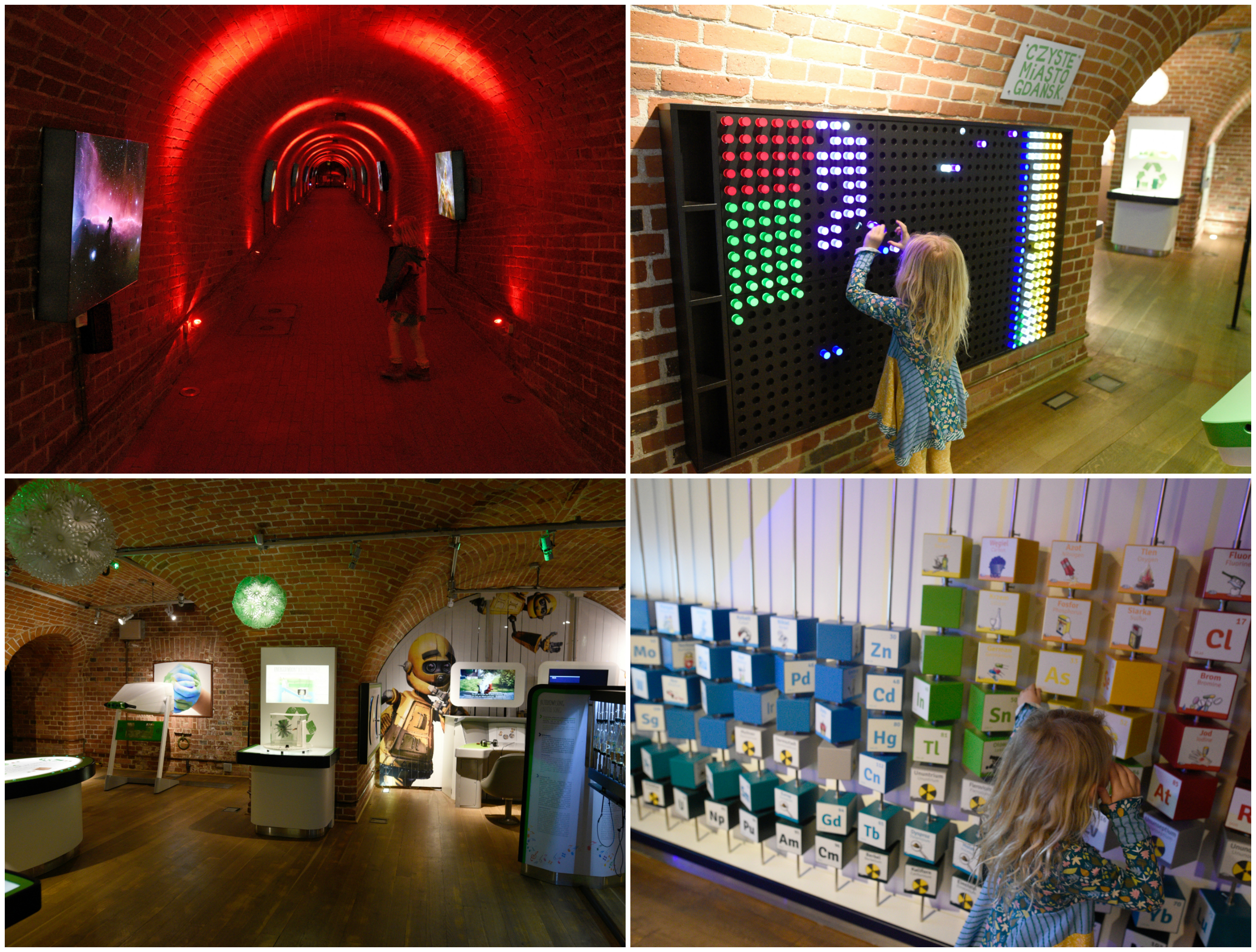 After the last exhibit, if you head left when you walk out the door, you will see a downhill path on the right. Walk down and you will get to a residential neighborhood with a playground.  The playgrounds here (and really anywhere now that we’ve been to Stockholm!) are nothing like Sweden’s but still fun to stop and play for a little bit. 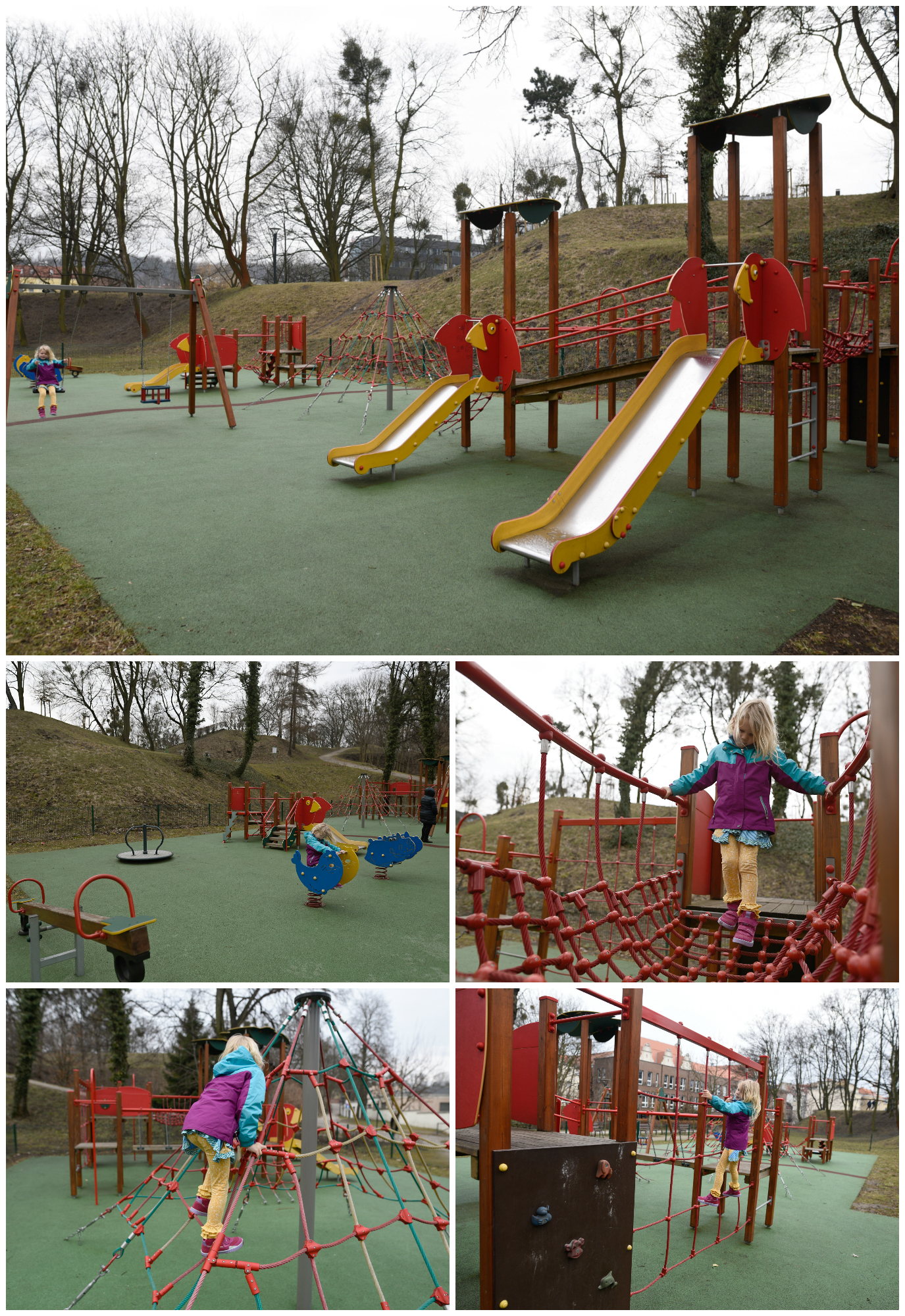 WHERE TO EAT IN GDAŃSK WITH KIDS

This is the one place we ate out a lot!  The food was familiar and things I grew up with.  The various cafes and bakeries have some amazing and cheap desserts. We ate so much yummy stuff here!  One of the things I wanted to introduce Milana to was a zapiekanka.  It’s just toasted bread with cheese and whatever toppings you choose (ham for her, mushrooms for me) but one of the most popular Polish street foods and something I ate lots of as a kid! Gdańsk doesn’t really have many places that serve it, but if you are near Kraków, you’ll see them selling it out of windows on every single street corner. The bakery that sold these also had some great desserts, which made the perfect lunch. 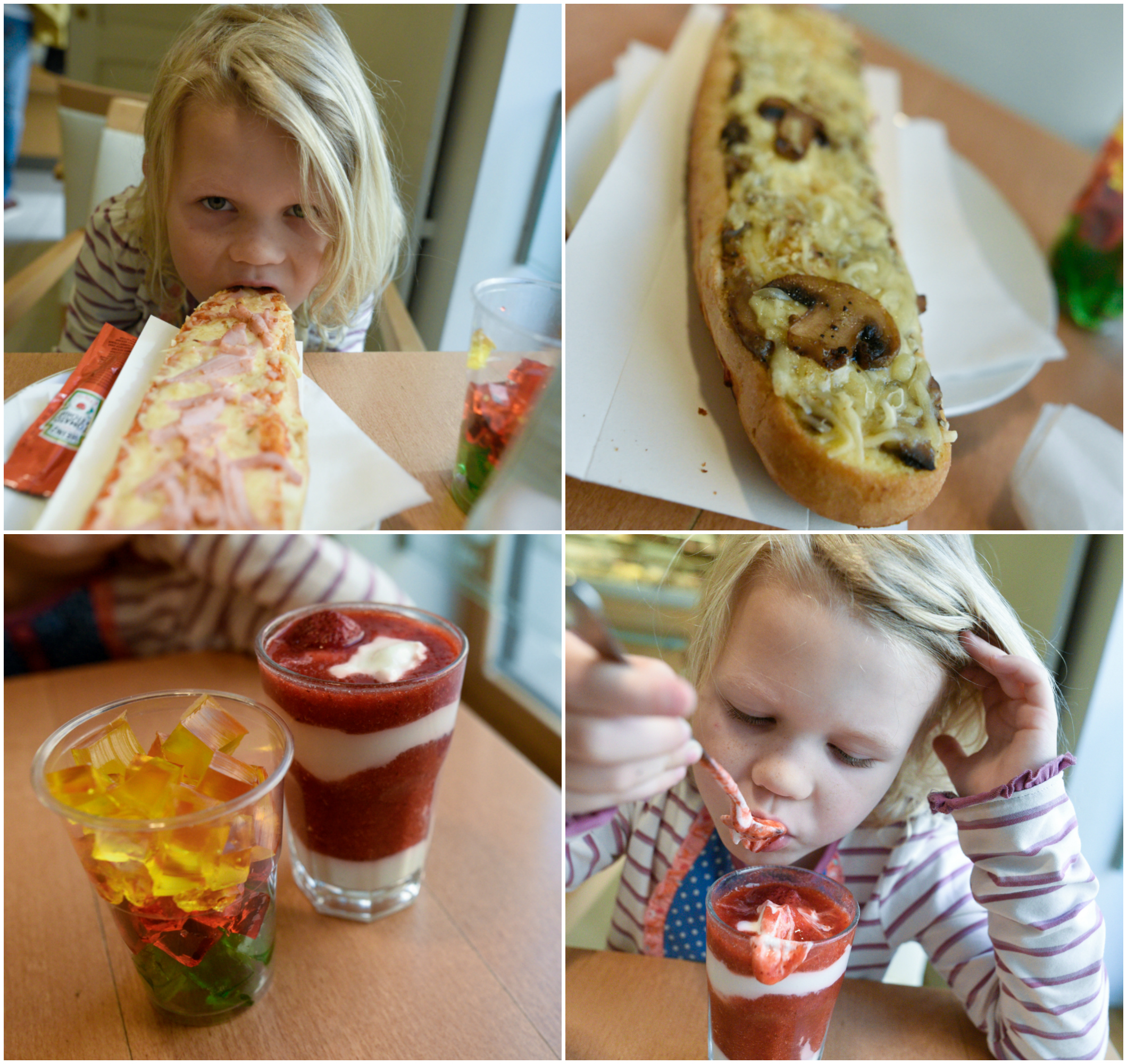 Our favorite (and a very popular!) restaurants as Pierogarnia Mandu.  Get here early because there will be a wait.  We came on a Tuesday evening around 5 and had to wait 30 minutes for a table.  The pierogi are made to order and very fresh (Din Tai Fung came to mind when watching them!), with lots of different options from the traditional Russian to the not so traditional options inspired by flavors all over the world. We ordered the Russian ones as well as strawberry ones, my childhood favorite and Milana’s too.  They also have lots of traditional Polish side salads to choose from, we chose the carrot one.  Total cost? $13! While we waited for our food, Milana played in the little play area they have inside the restaurant.  Note: Pierogi is plural, pieróg is singular.  My pet peeve is when people add an s and call it pierogis. No, don’t be that person! 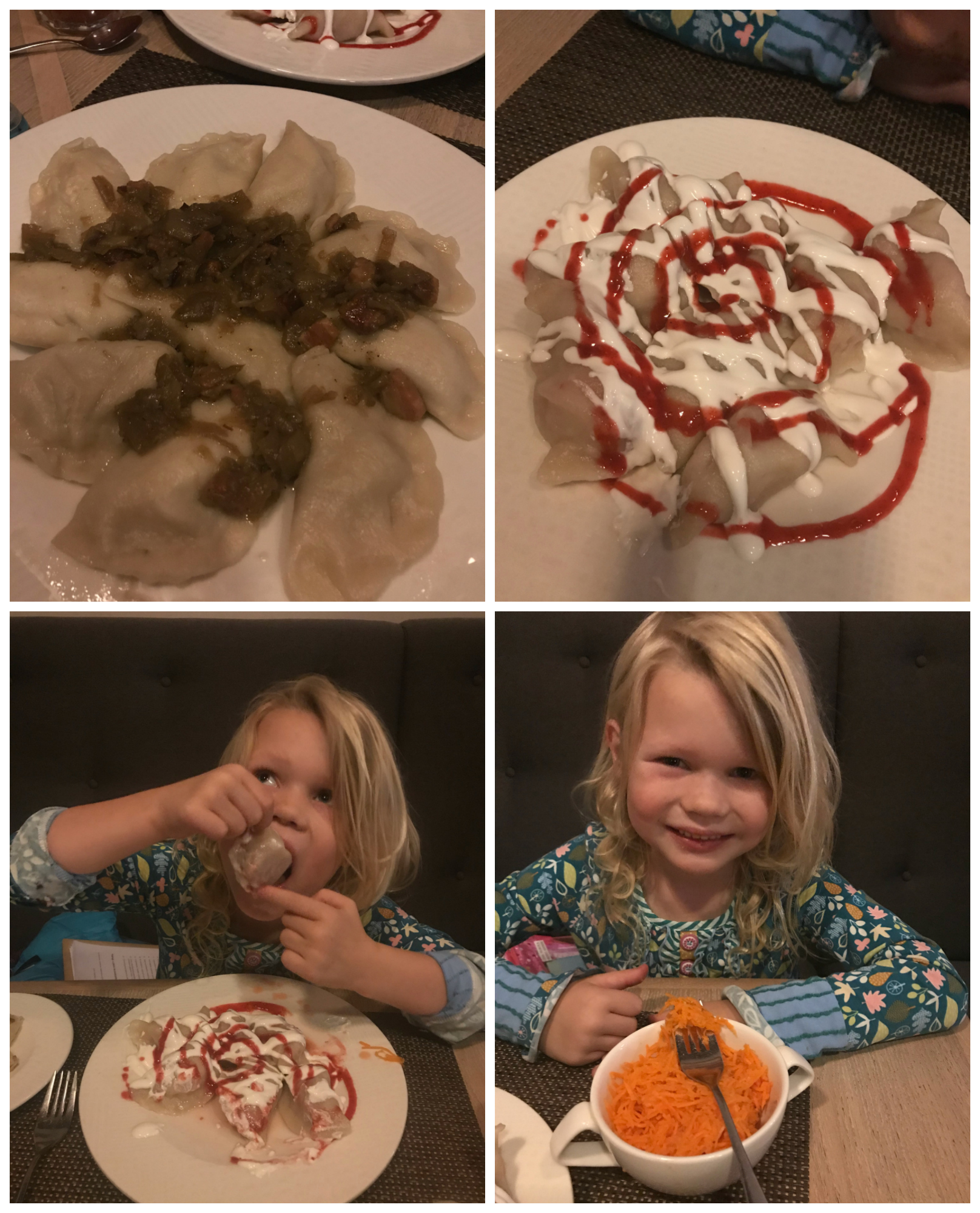 Even though our hotel had a free breakfast buffet (which was awesome and filled with all the things I ate as a kid), I wanted to try a local place one morning so we walked over to Lookier Cafer.  The coffee and food here is really good, we definitely over ordered but wanted to try multiple things. Our bill was under $15 for all this food and drinks! 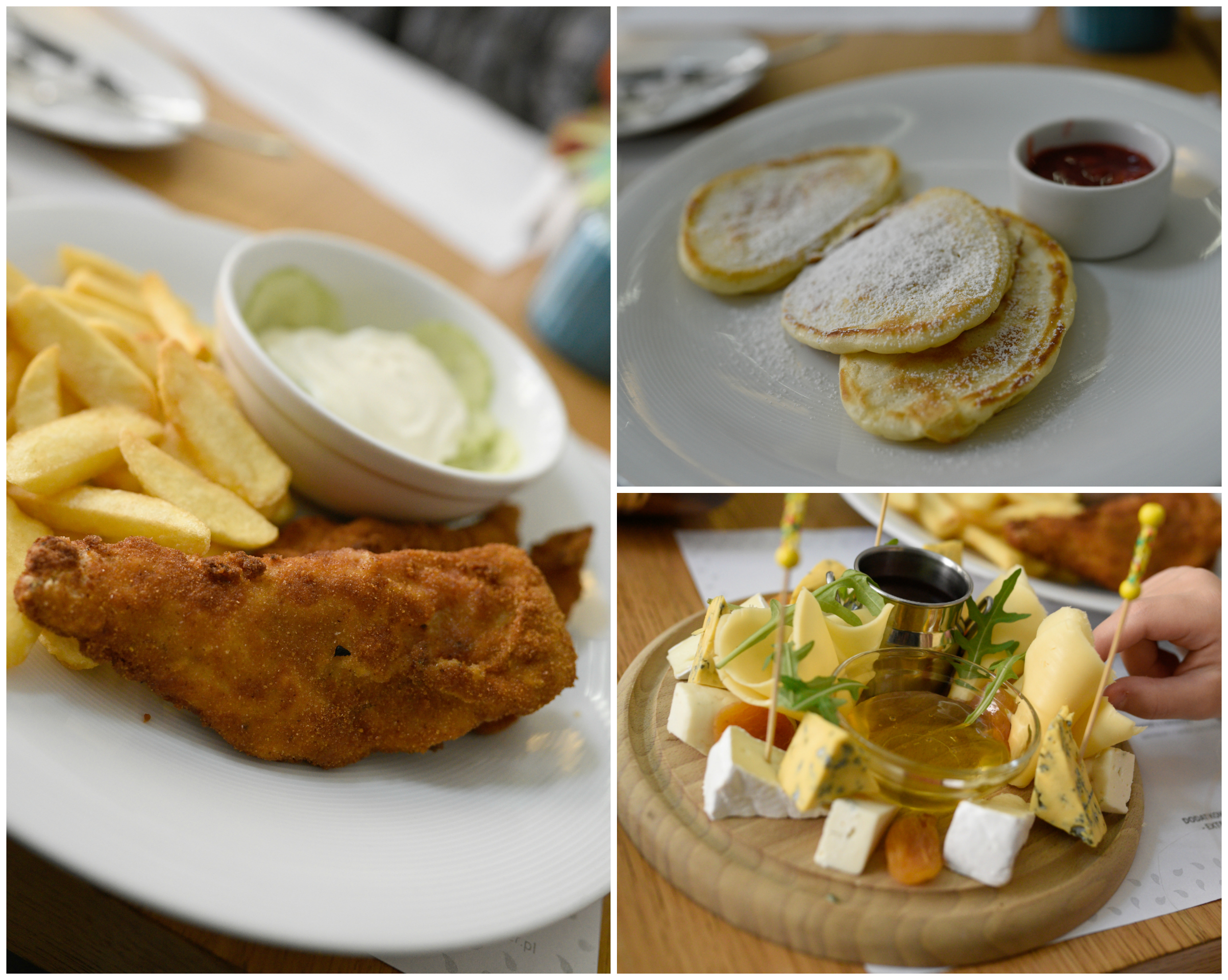 If you want some traditional Polish food, head to Jacobsen.  Near Old Town but in an alley off the main street, this place was really good and packed when we went.  We had the kiełbasa, pierogi and some bigos.  Bigos is one of my favorite foods ever and Milana loves it too.  It’s basically sauerkraut, cabbage, some meat and lots of spices. 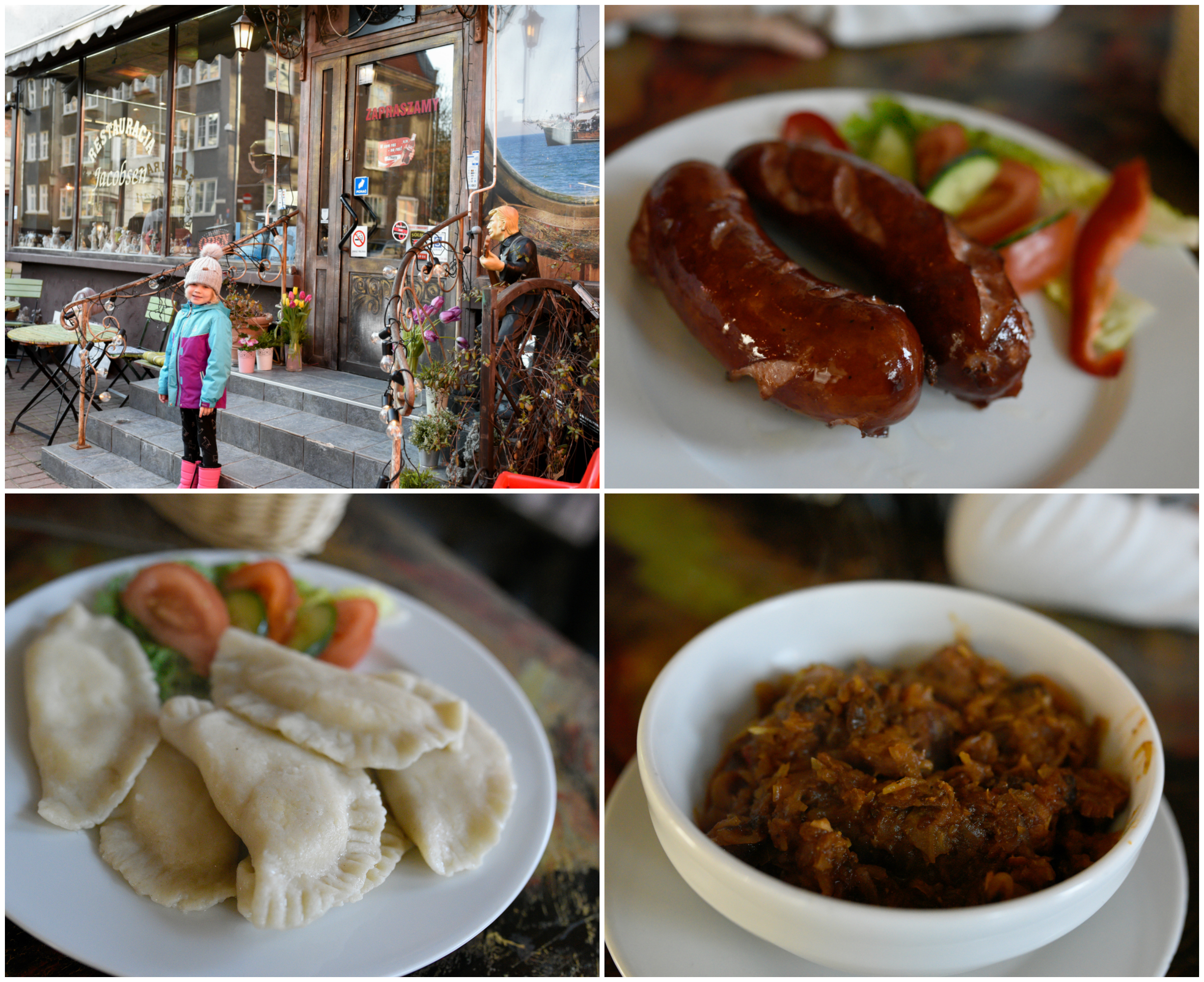 Right across the street from our hotel was a pizza place that was always packed called Sempre Pizza e Vino.  Milana wanted pizza one day, so we walked across to get it.  It was really good! We ordered the 4 cheese with some ham and loved it. 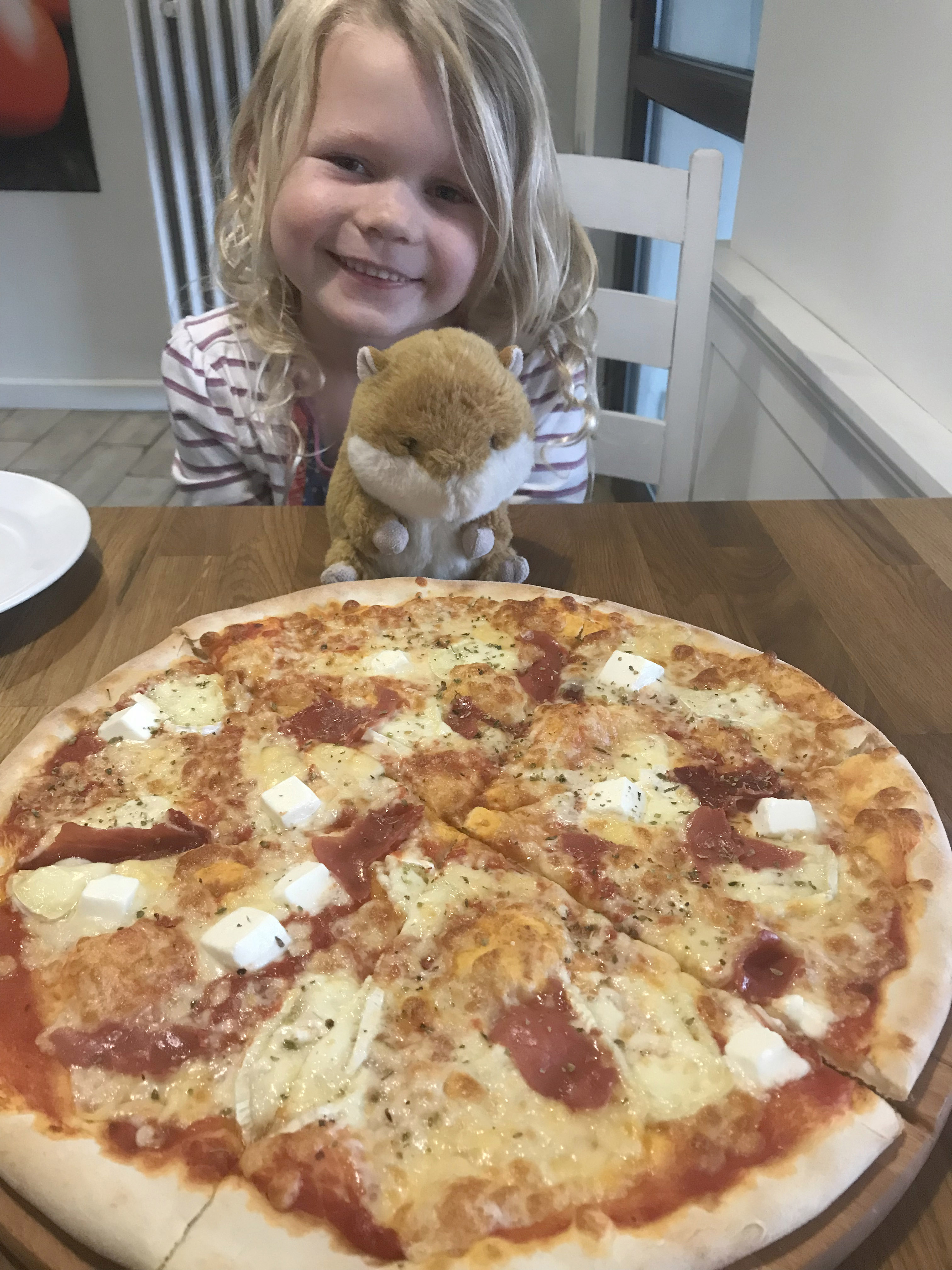 Of course, it’s not a trip without eating some yummy desserts! Poland cafes are known for really good desserts, there are so many options to choose from. One of the most popular Polish desserts are pączki, basically the Polish version of donuts traditionally filled with plum jam or some other fruit.  But times have change and now you can get pretty much anything inside, from nutella to bananas and chocolate.  Stara Pączkarnia has a few locations in Gdańsk as well as in other parts of Poland.  The pączki are hot and fresh and so good! 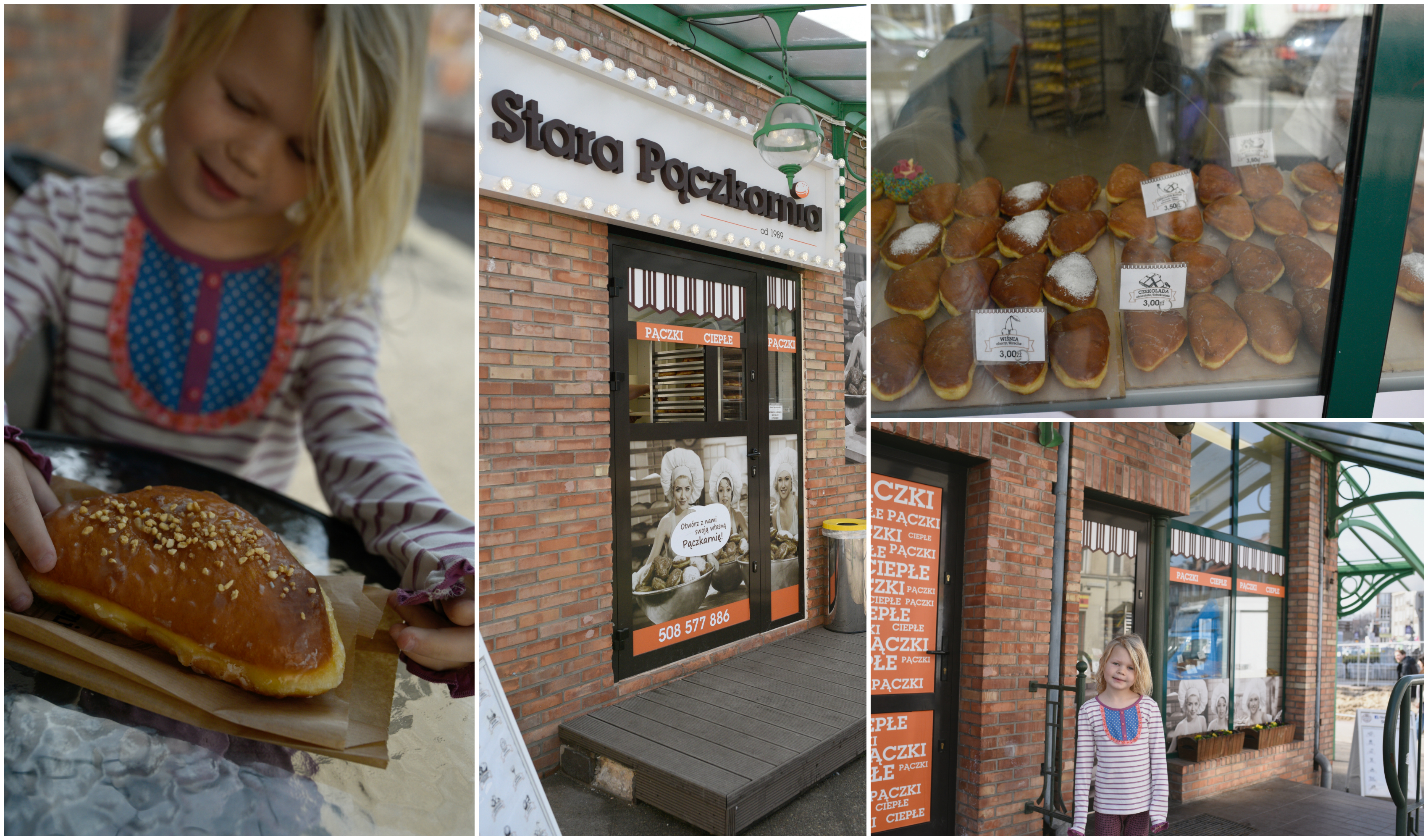 About a block from our hotel on the waterfront was a cafe with wine, beer, coffee and desserts. We stopped in one evening after dinner and Milana had some jello.  I had a strawberry beer, which was really good.  Our total was under $5, can’t beat that!

There are many dessert places throughout the city, you are bound to find one no matter where you are.

When I was a kid, one of my favorite treats was this sweet condensed milk that you sucked out of what looked like a toothpaste tube.  Now they come in these pouches and in many flavors.  The first ingredient is sugar, you know it’s going to be good! It looks different now but tastes just like I remember.  Though I must say, it’s way too sweet now that I’m an adult and I could only handle a little at a time.  Milana loved it too, but I think any child would!

We had a really good time in Gdańsk and would have loved to stay longer.  I’m hoping to bring her to Poland for an extended time in the near future, so she can meet all her family members that live there. If you go to Gdańsk in the summer, make sure to go to Sopot as well for the sea! 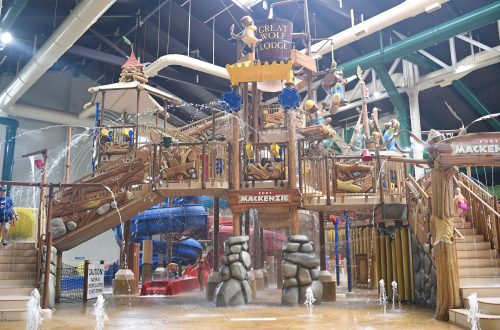 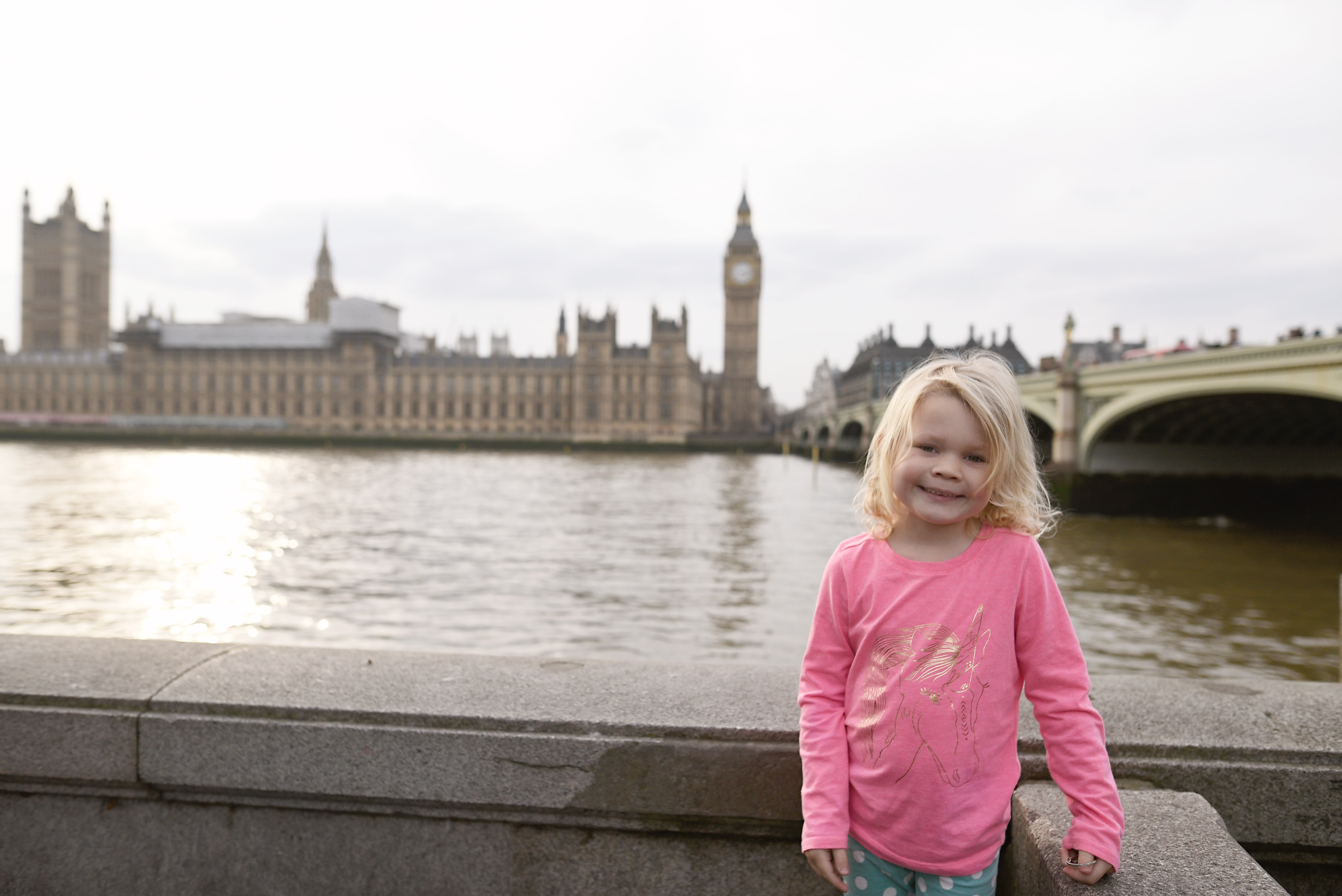