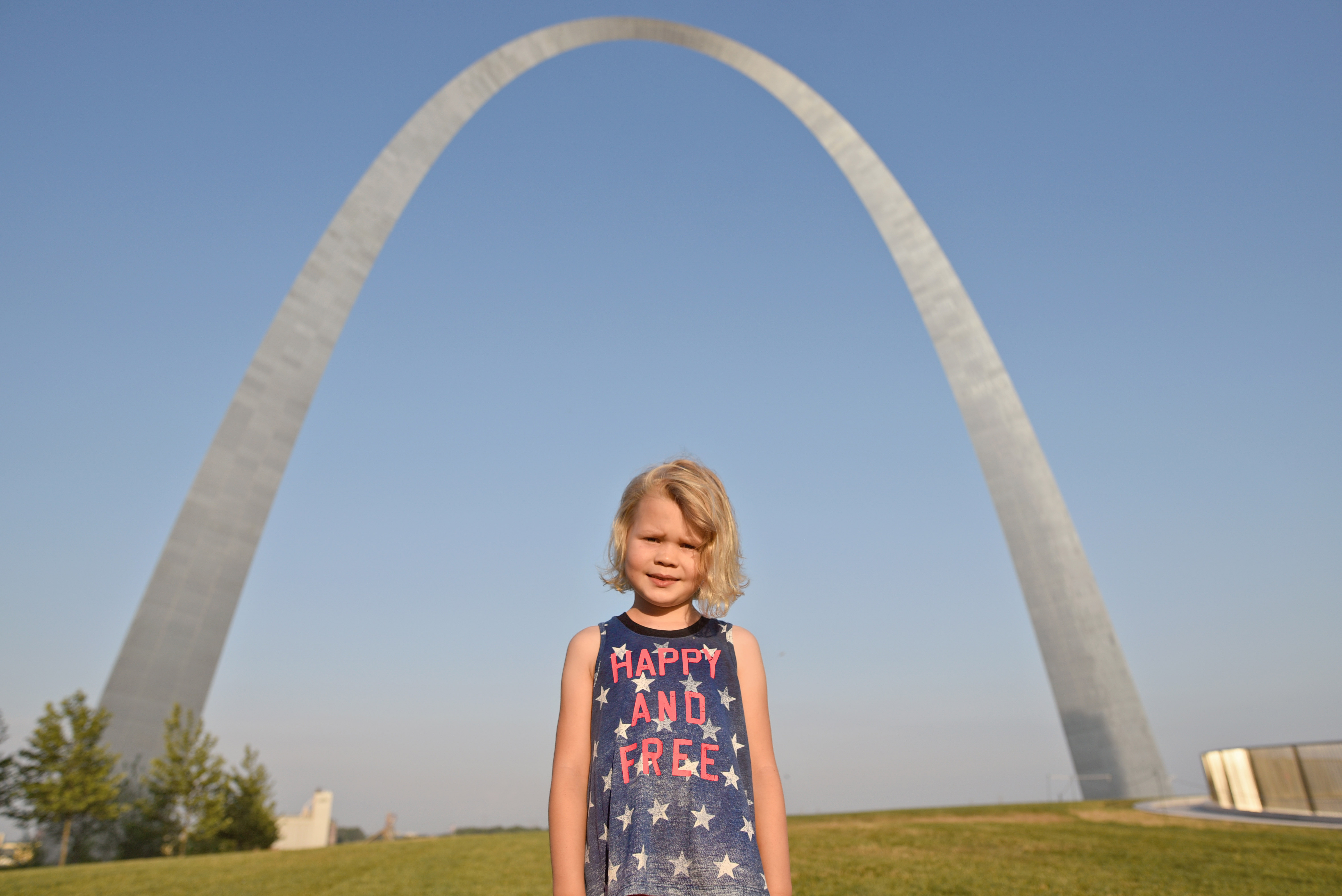 After seeing a show about St. Louis, Milana asked if we can go see the Arch in person.  I love when she gives input about our destinations, so of course I had to make it happen! This was a mom-daughter trip and we had lots of fun. Dave and I had been before but it was Milana’s first time.  We combined this trip with Denver and used mostly points for hotels and airfare.  We spent just over $400 for a total of 7 nights in hotels (Hyatt, Hilton, Marriott) and 6 flights on Southwest. If you aren’t using award points to travel, you are missing out! Check out my Finding Travel Deals post to see how I find deals and utilize points for travel. Travel doesn’t have to be expensive if you learn the tips and tricks of utilizing points!

Our first night was spent at the Hyatt Regency, which was right by the Arch! We had the Arch view from our room, which Milana loved.  Because this hotel was nearly $500/night for our date, I used my free night to book the room. We were able to check in early at 11am and had a late checkout of 1pm the next day, which was great.

Our next hotel was the Residence Inn St. Louis Downtown.  Now this wasn’t my favorite Marriott hotel, probably the opposite however I chose it because of their free parking since we had a car that day.  We had a suite that had a separate living room and a full kitchen.  This would be a good option for a large family, since we had 2 queen beds as well as a sleeper sofa, which was a bit much for just the two of us! 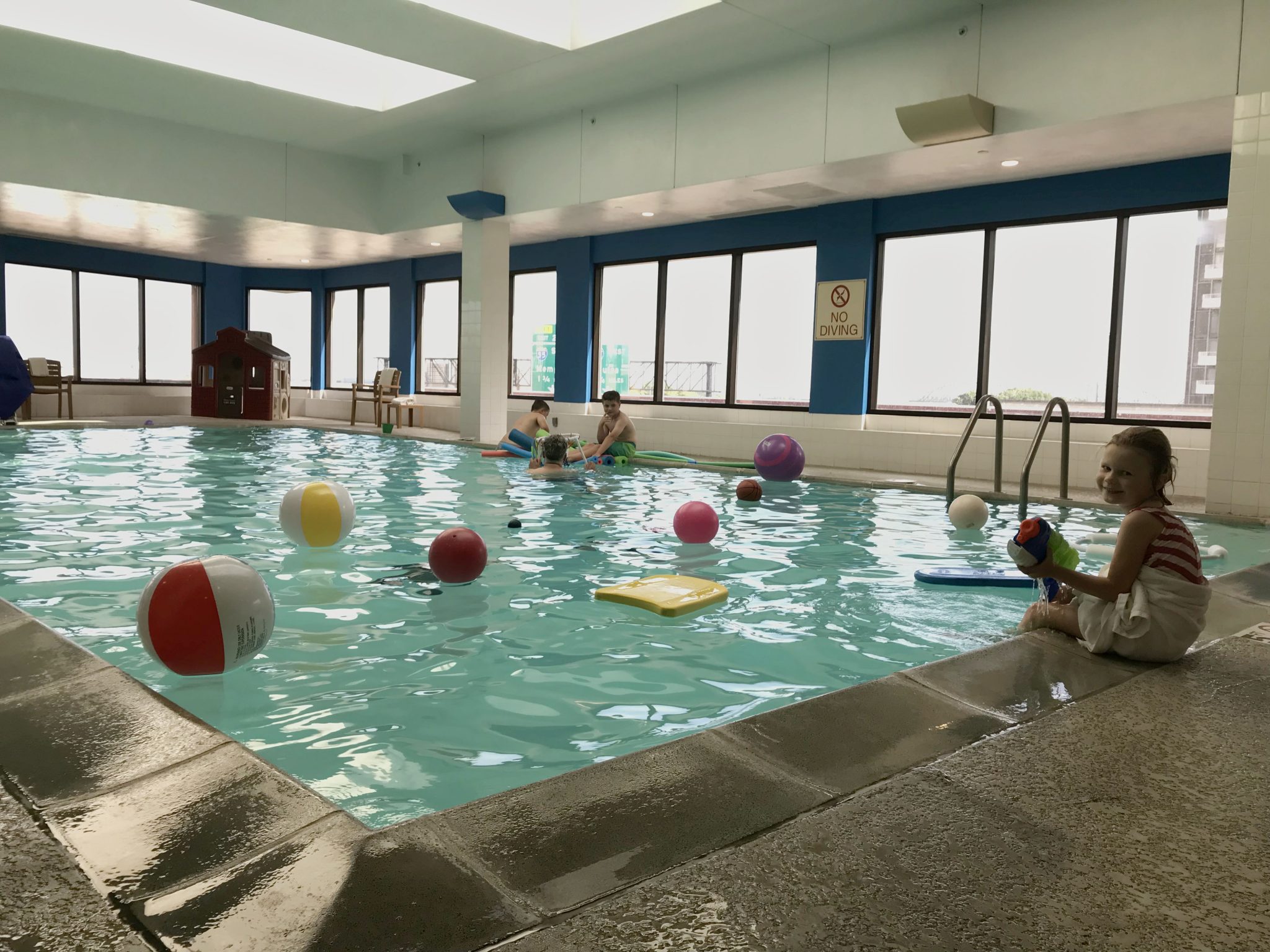 Obviously the big draw to St. Louis is the Arch, which is what Milana really wanted to see in person.  We originally planned to go inside, however after speaking to people who did we opted not to. It’s a long process and many said if they knew how boring it would be, they wouldn’t have paid to do it.

Right down the street from the Arch is Kiener Plaza.  There’s a small playground and a splash pad, which Milana loved! We went to the splash pad every evening once it cooled off. 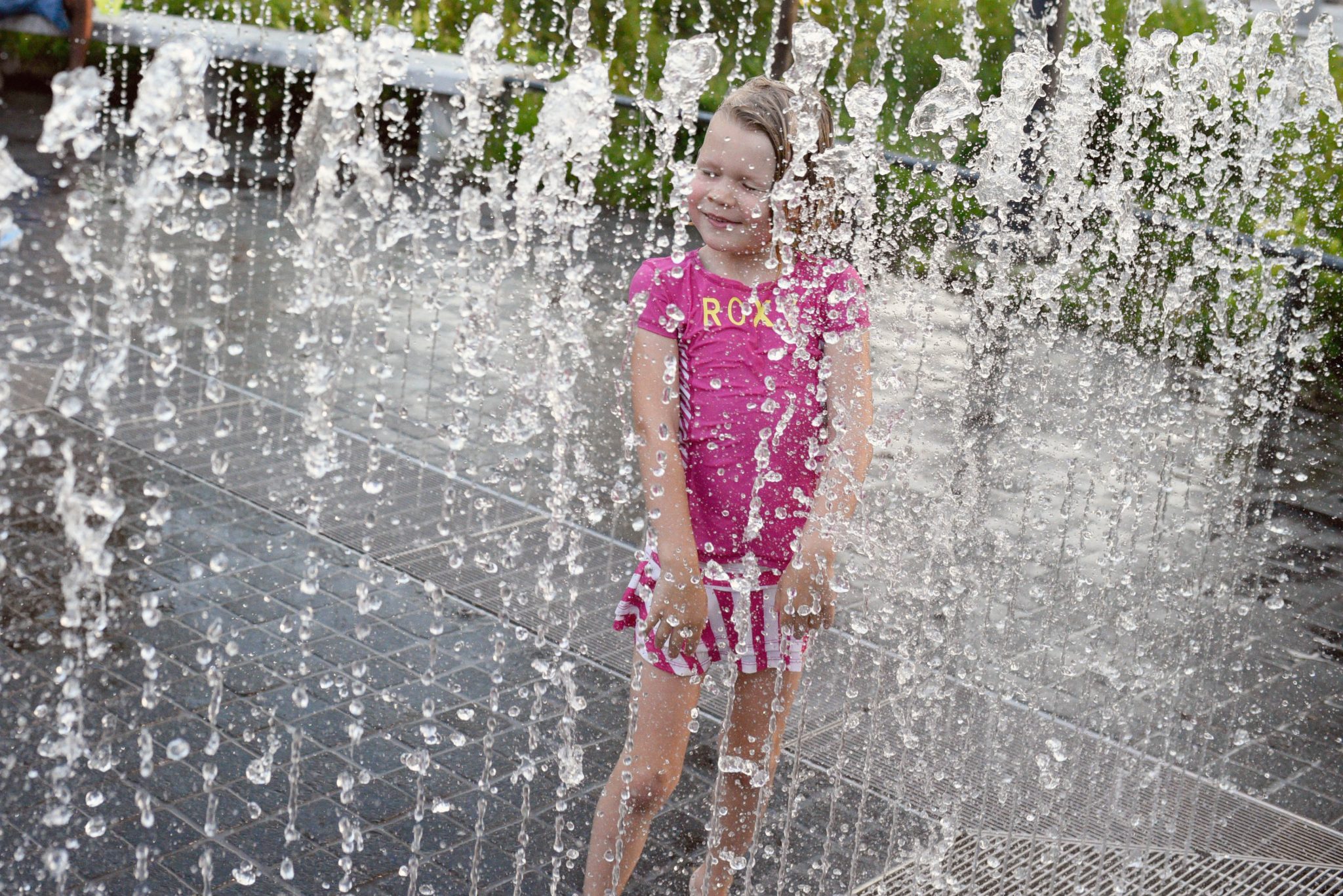 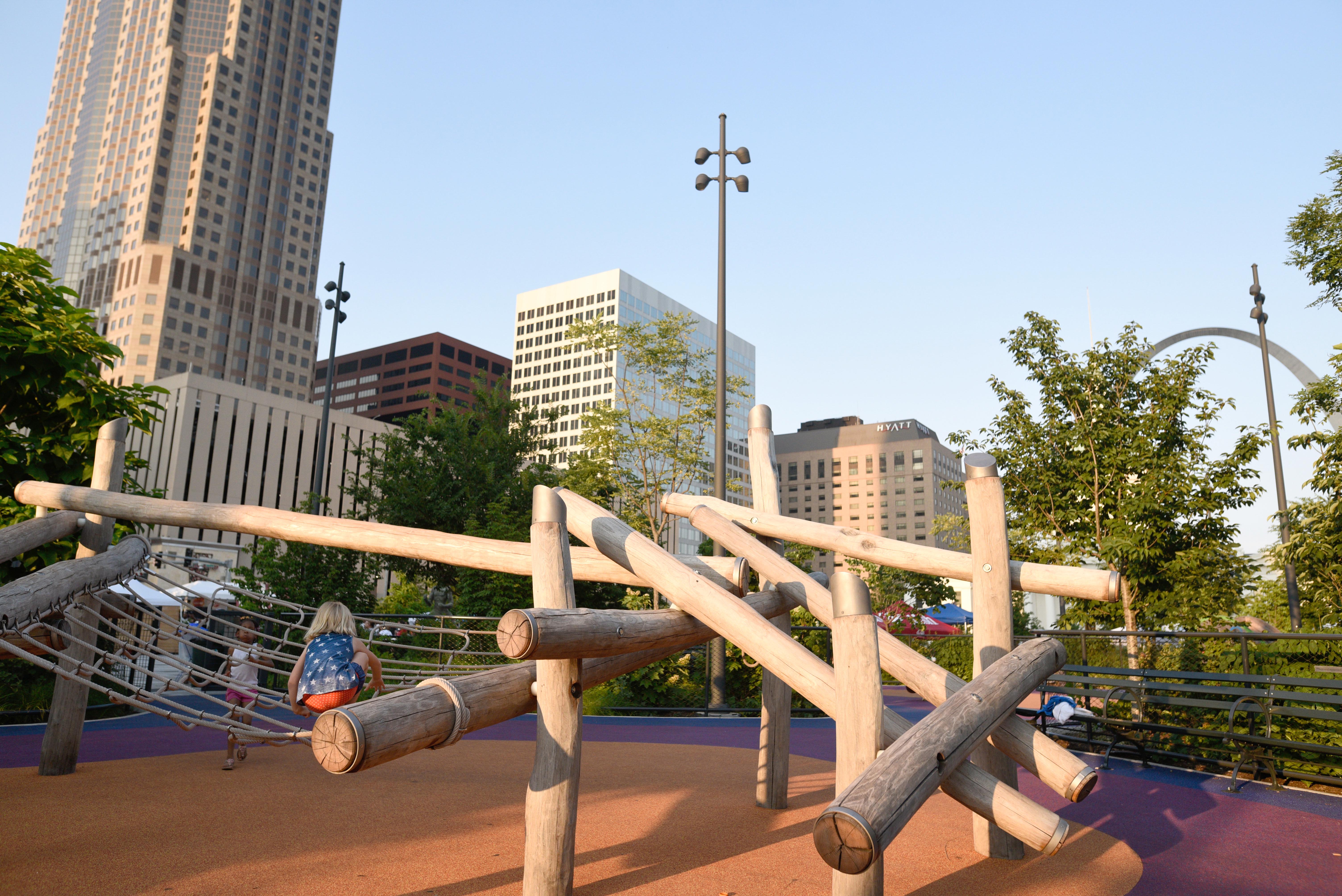 Across the street from Kiener Plaza is Citygarden, another area with a splash pad and water play for kids. We came here briefly but Milana didn’t like it as much as Kiener. The splash pad here is bigger, but the “pools” were so nasty. Stagnant water, with this disgusting film on it, not something I wanted her to play in and possibly ingest. She went in briefly and we left.   We ended up going back to the other one and she had a blast.

Another reason we wanted to visit St. Louis is to check out the City Museum.  This was awesome and we had a blast for quite a few hours! If you have multiple kids and are alone, it might be hard to keep track since there are so many areas they can get lost in.  Keep in mind, the parents are just as active as the kids here, so it’s not the type of place you sit back and let them explore.  Prepare to crawl into spaces you never knew you could fit in! I highly recommend this if you have adventurous kids that are at least 3-4 years old and not terrified of exploring small places. Milana loved it and wants to go back! 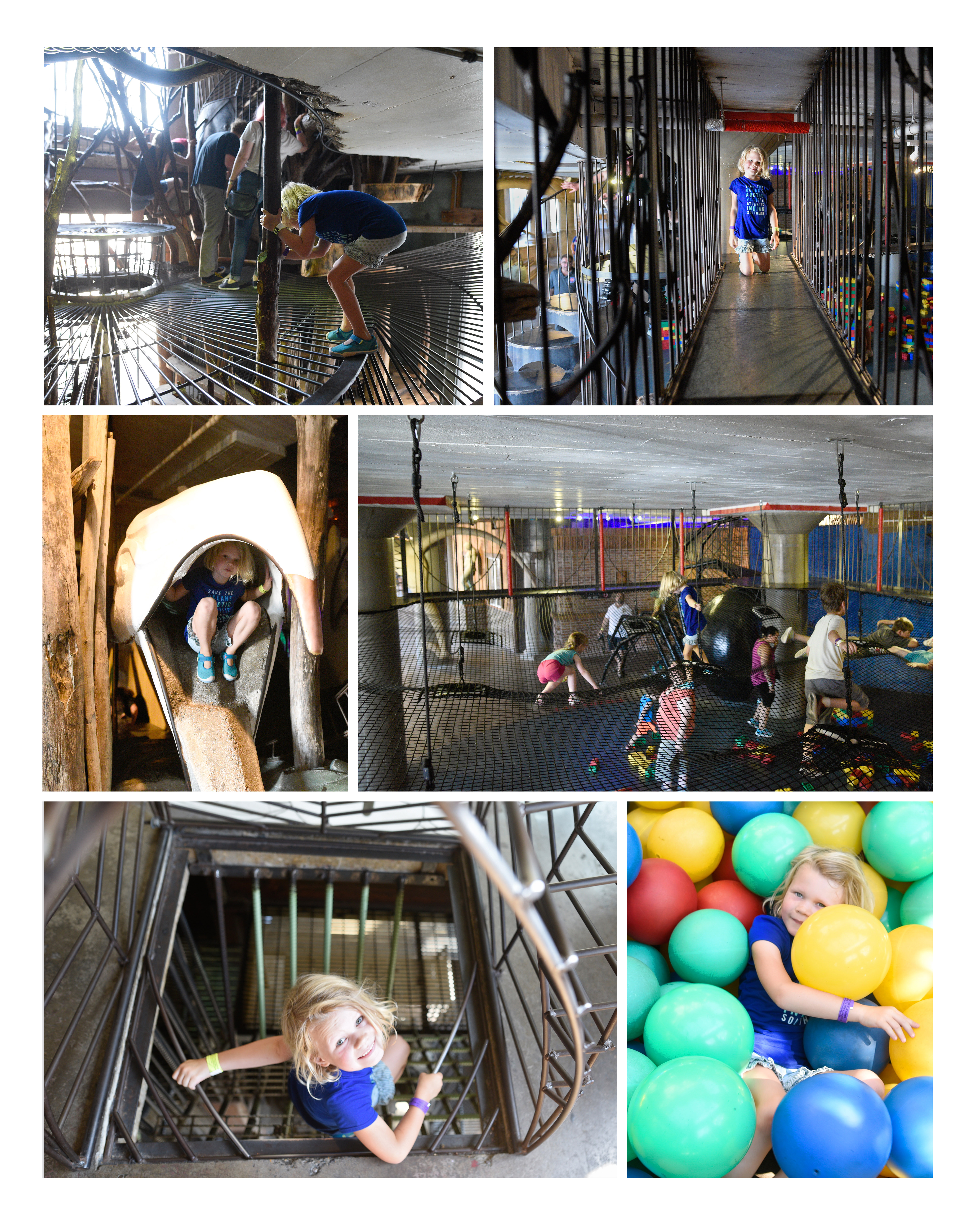 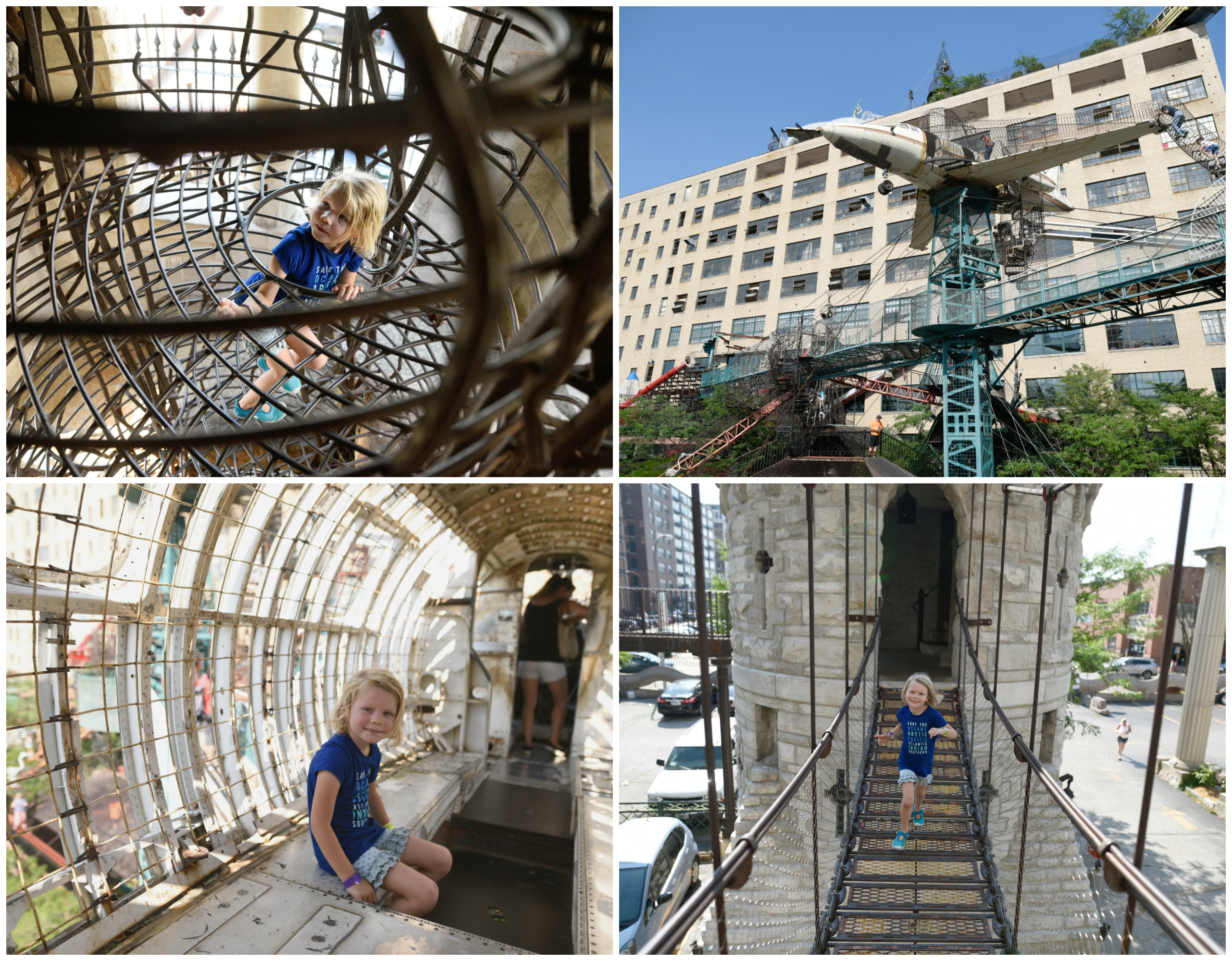 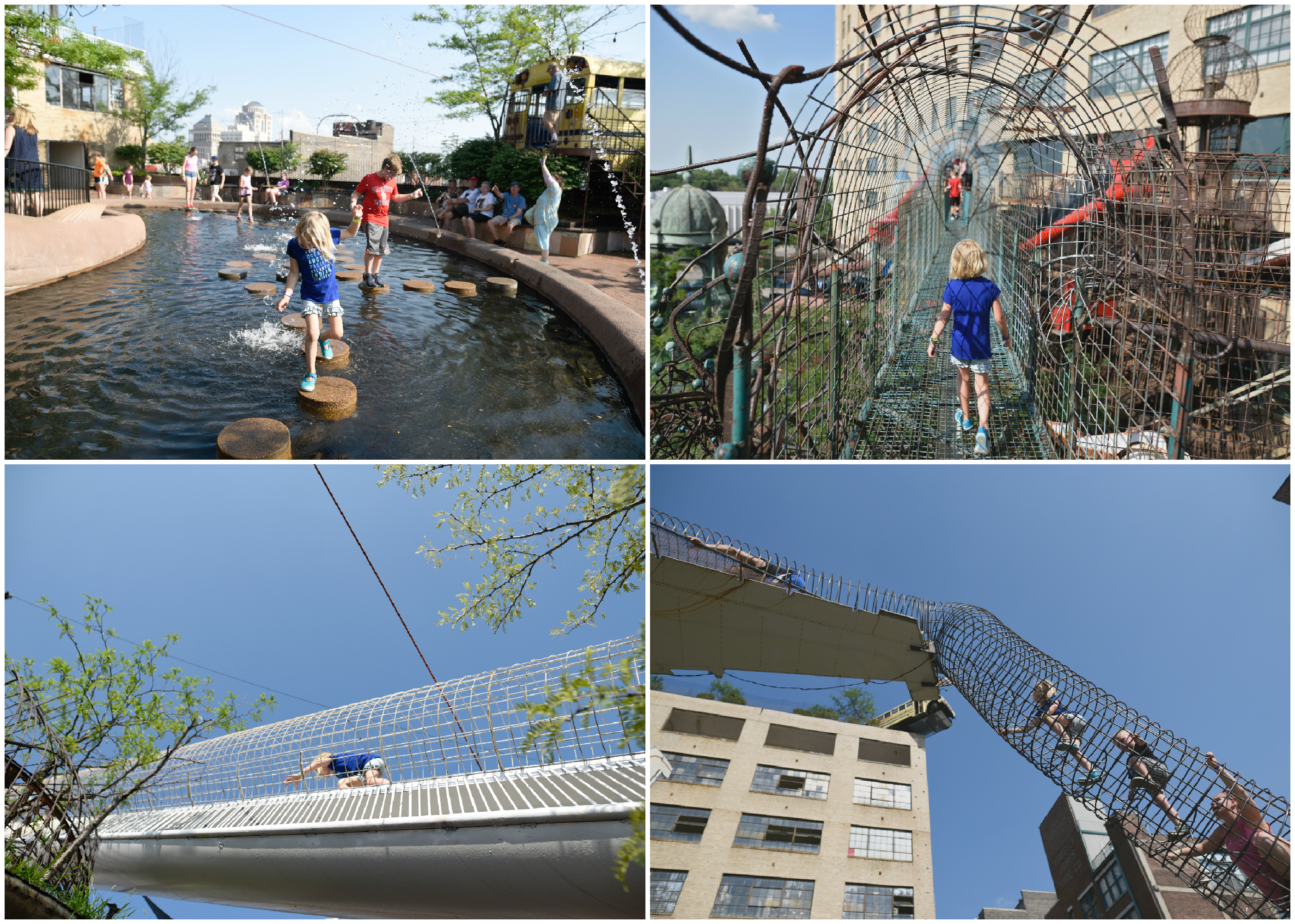 Of course no visit to a new city is complete without visiting a children’s museum! We visited two in St. Louis. The first was the Magic House, which was really great.  The bottom floor is dedicated to art, with many different stations like building, using recycled items to make something, sewing and a huge art studio. Needless to say, this was Milana’s favorite and we spent the majority of our time here. 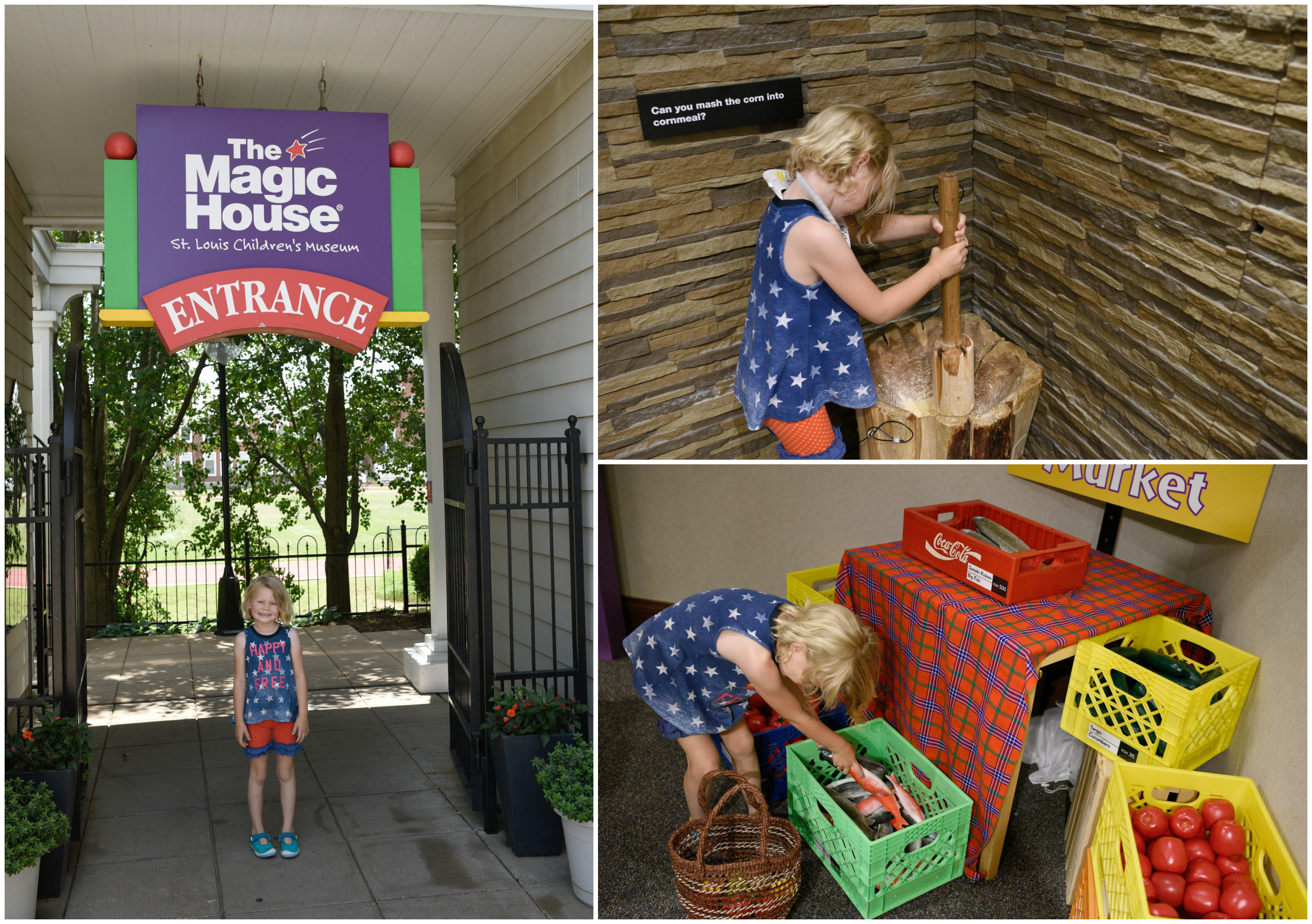 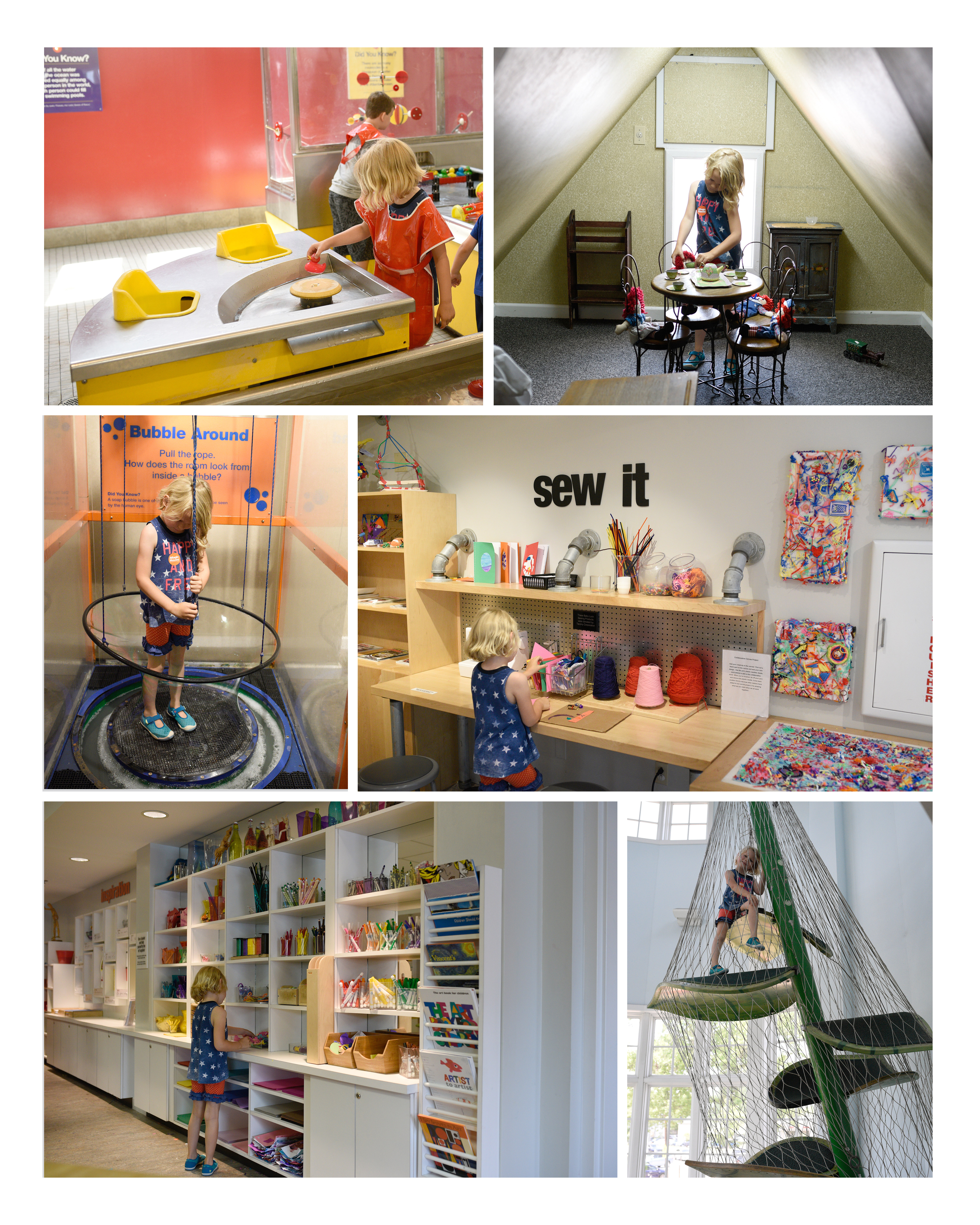 The second museum we visited was Myseum, which was terrible. She barely lasted an hour and I wouldn’t recommend coming here. The exhibits they do have are old and pretty terrible and the majority of the space is taking up by a bounce house and another inflatable. Skip this, not worth the visit! 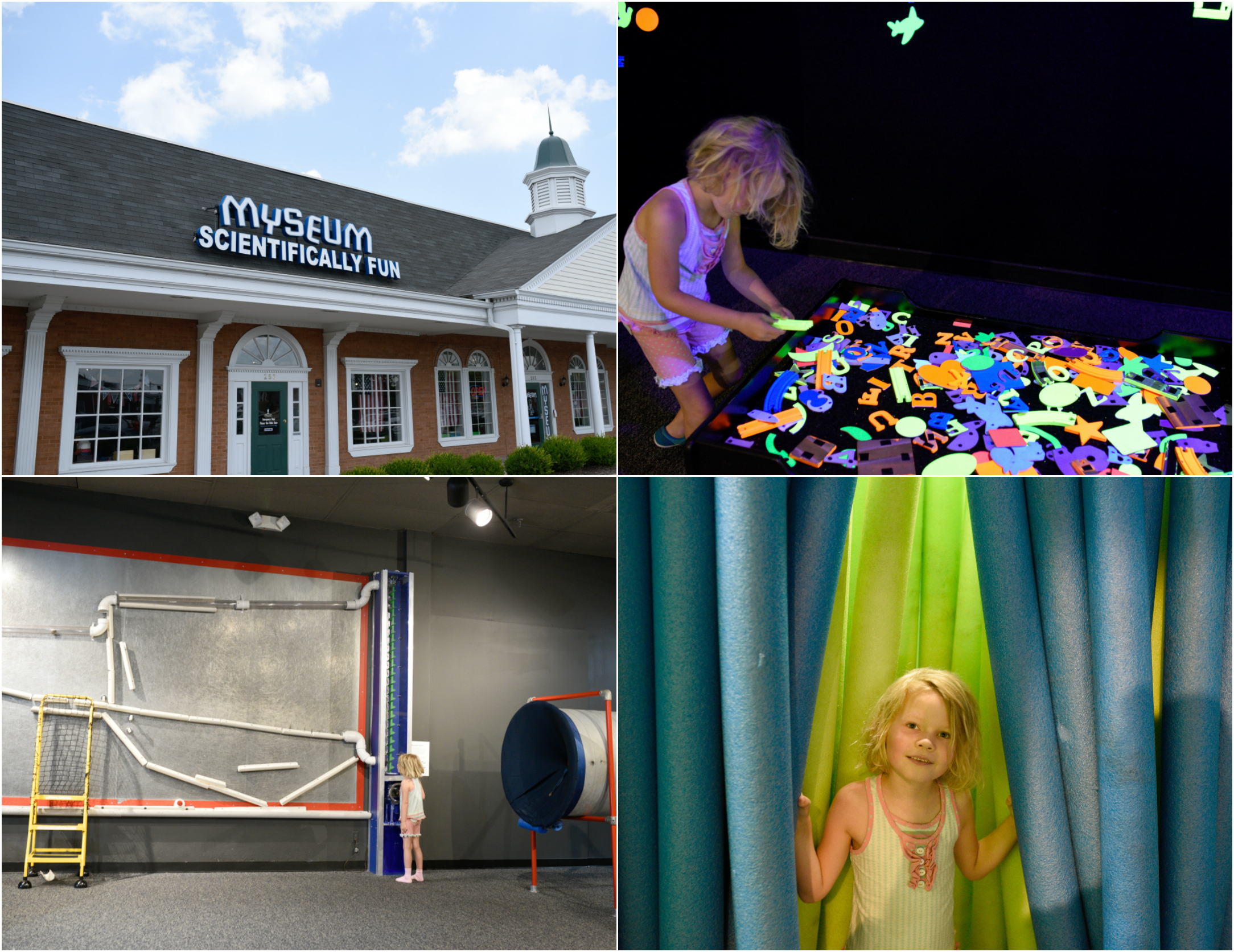 On our last day, we visited the St. Louis Science Center, which was free for us because they are a part of the ASTC Travel Passport program.  The admission here is free, but you pay for other things including parking.  Our ASTC membership gave us free parking and 6 Discovery tickets, which you use for the discovery room.  Honestly unless your kids are under 5, skip that room. It’s definitely more geared toward toddlers! 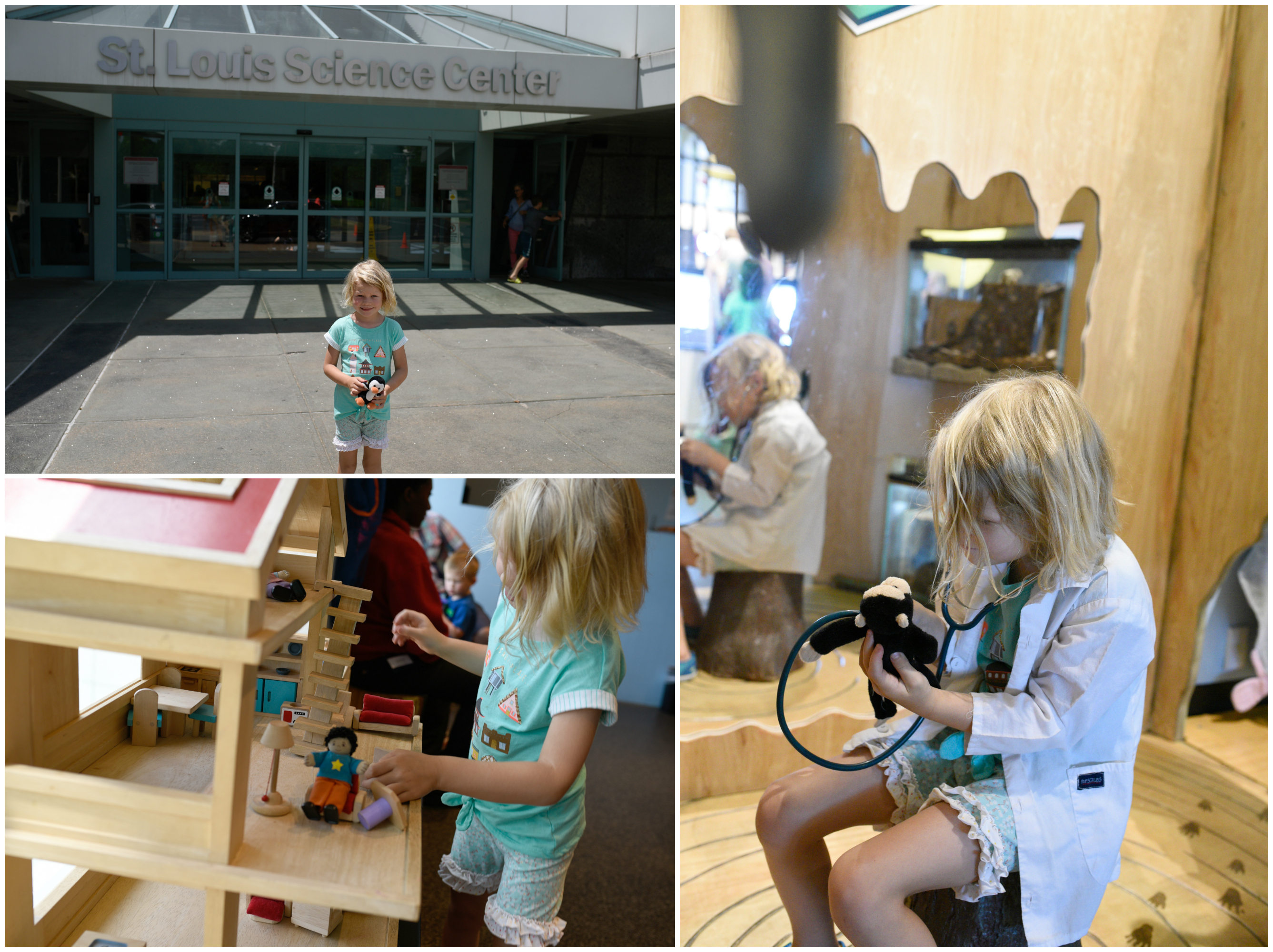 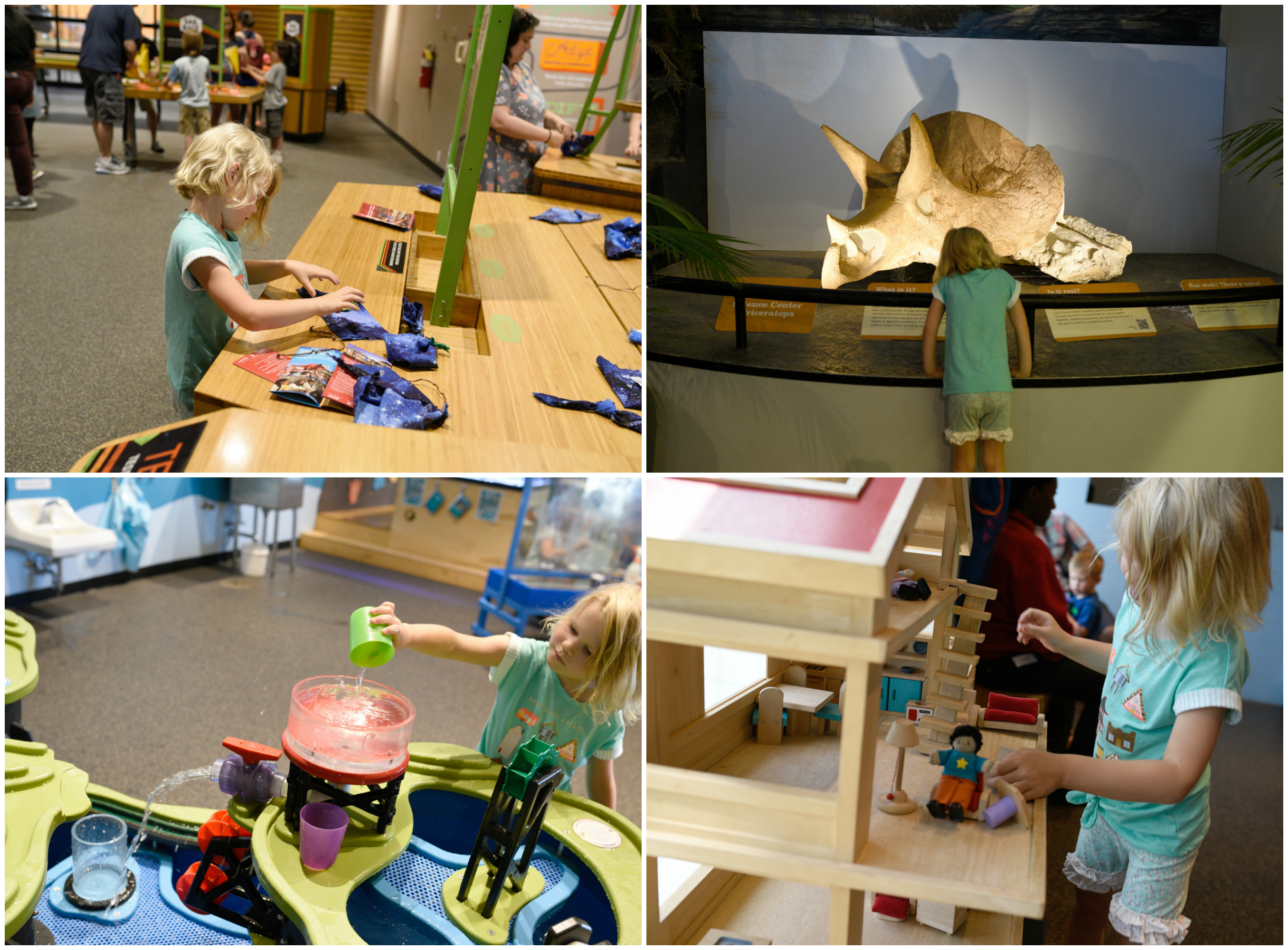 We heard a lot of things about the St. Louis Zoo and while we aren’t zoo fans at all and rarely visit them, but Milana asked if we can go so I agreed.  The zoo is free, however they really should just charge you up front so that you aren’t taking your credit card out at multiple attractions. We had to pay for parking ($15), then the train ride, the children’s zoo, etc.  They have an Adventure Pass you can buy, but it didn’t make sense for us so we skipped it.  When we got to the Polar Bear exhibit, the poor thing was panting by the glass and looked like it was ready to die. It was in the 90s and humid that day, and people kept banging on the glass to elicit a response.  There was a tiny little pool for the bear to swim in but not nearly big enough for such a large animal to truly enjoy.  We both felt terrible for the poor bear and don’t plan to visit zoos in the near future as a result, they just make us so sad to see these poor caged animals. 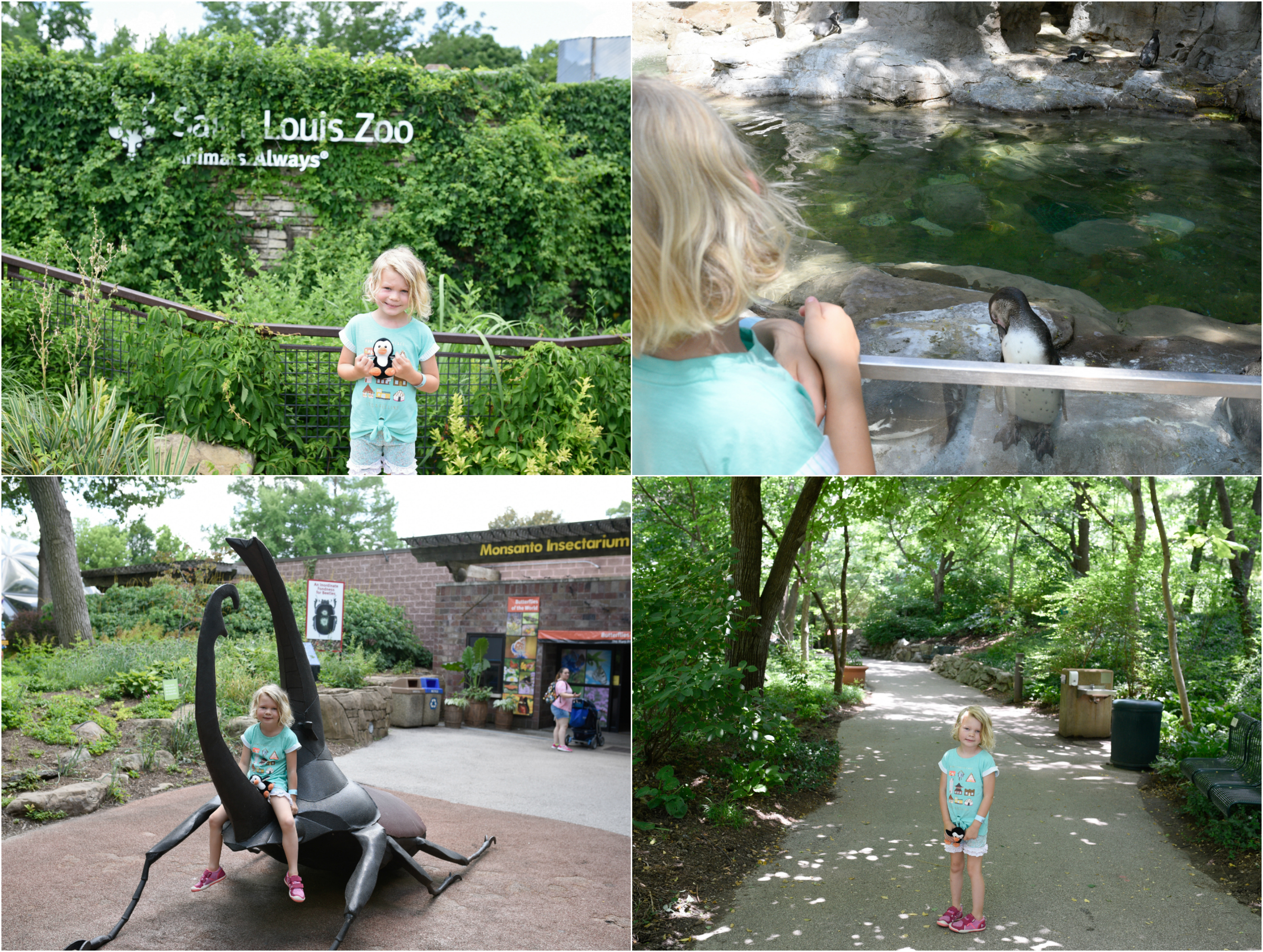 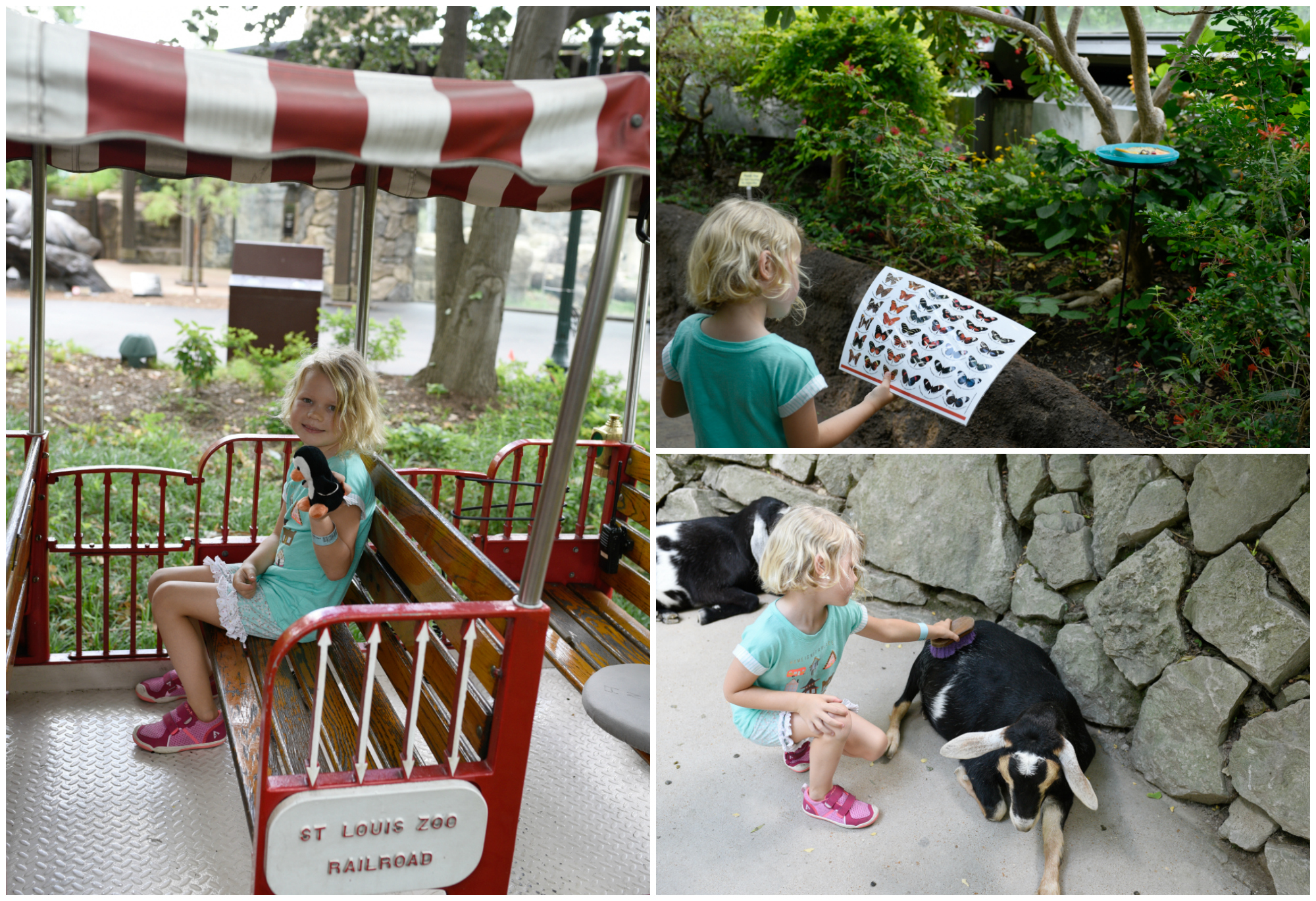 I’ll be honest, St. Louis definitely didn’t wow us with their food options!  One of our favorite places we visited was Pieces, not because of the food though but because they have hundreds of board games you can play while you eat. We are a huge board game family so this was perfect. The food here is nothing special but we had fun trying out some new games. 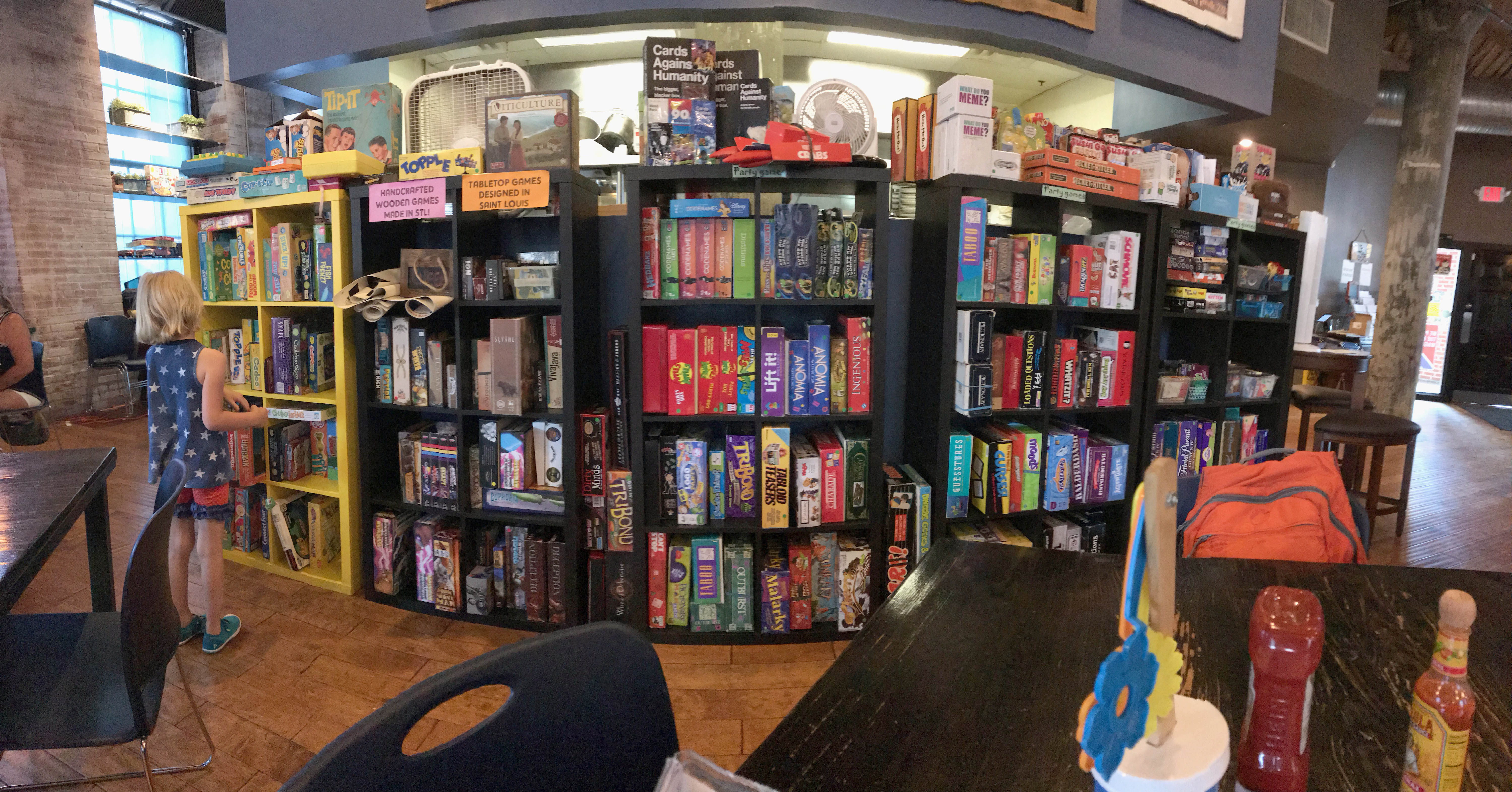 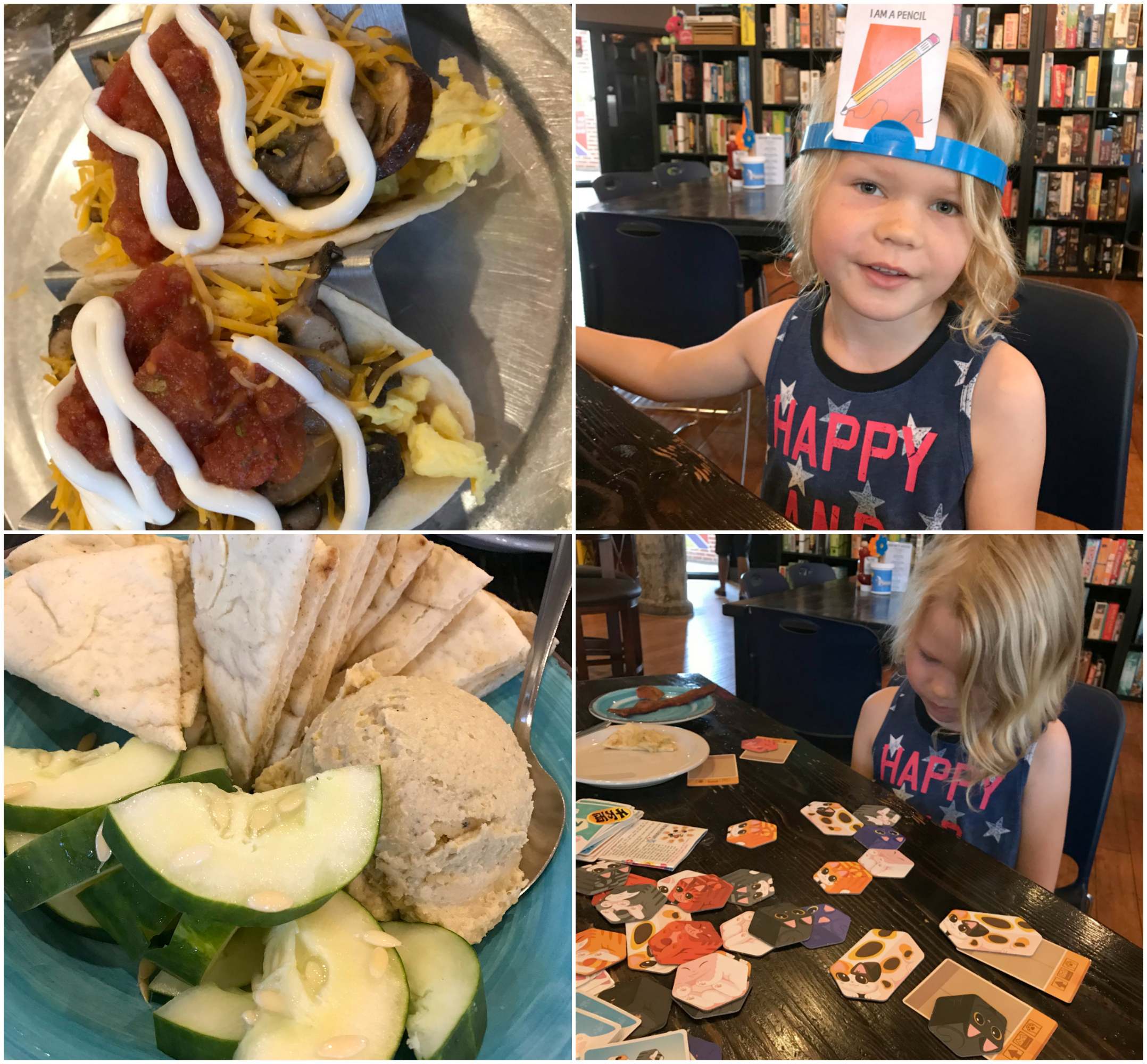 Another place we tried was Schlafly.  Milana wanted mac and cheese that day after I showed her a picture from a friend who visited just days before us.  But what they brought out was literally just pasta with a melted piece of cheese on top. Her face says it all, she didn’t touch it and ended up eating half of my pesto pasta. Keep in mind there are multiple locations, and while it’s technically a chain, they don’t have make the same food items in the same way at different locations.  I tried a raspberry beer and it wasn’t good at all, not a place I would go back to or recommend! 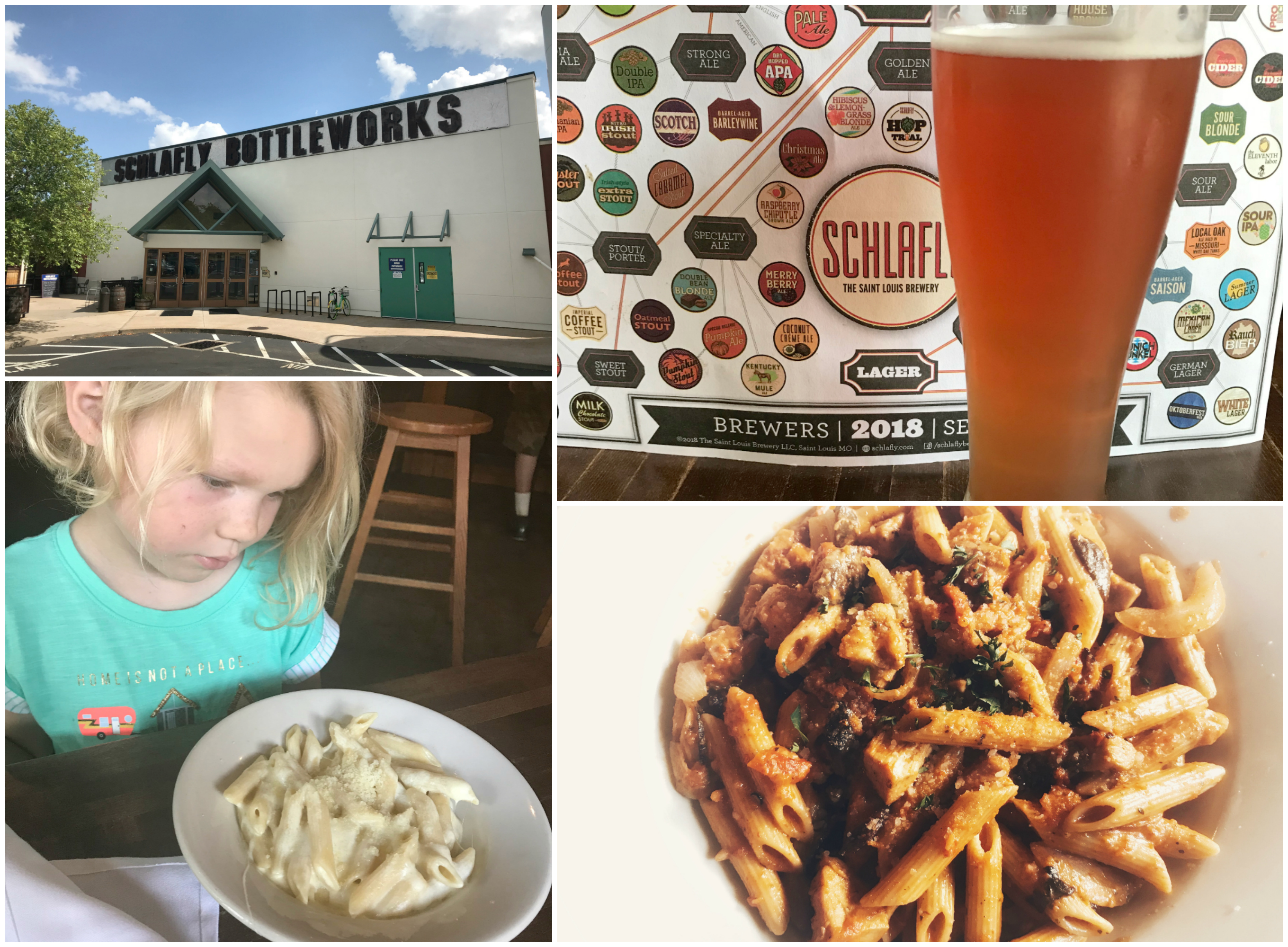 Another place that was recommend to us was Pappy’s for bbq.  We heard about huge lines however there was no one in line when we went at 11:30 on a weekday.  We ordered pulled pork and brisket and while the pulled pork was good, the brisket was super chewy and we kept spitting out pieces and ended up just leaving it behind.  Lots of impatient people in the parking lot too! I was buckling Milana up into her car seat and someone cursed me out for taking too long. 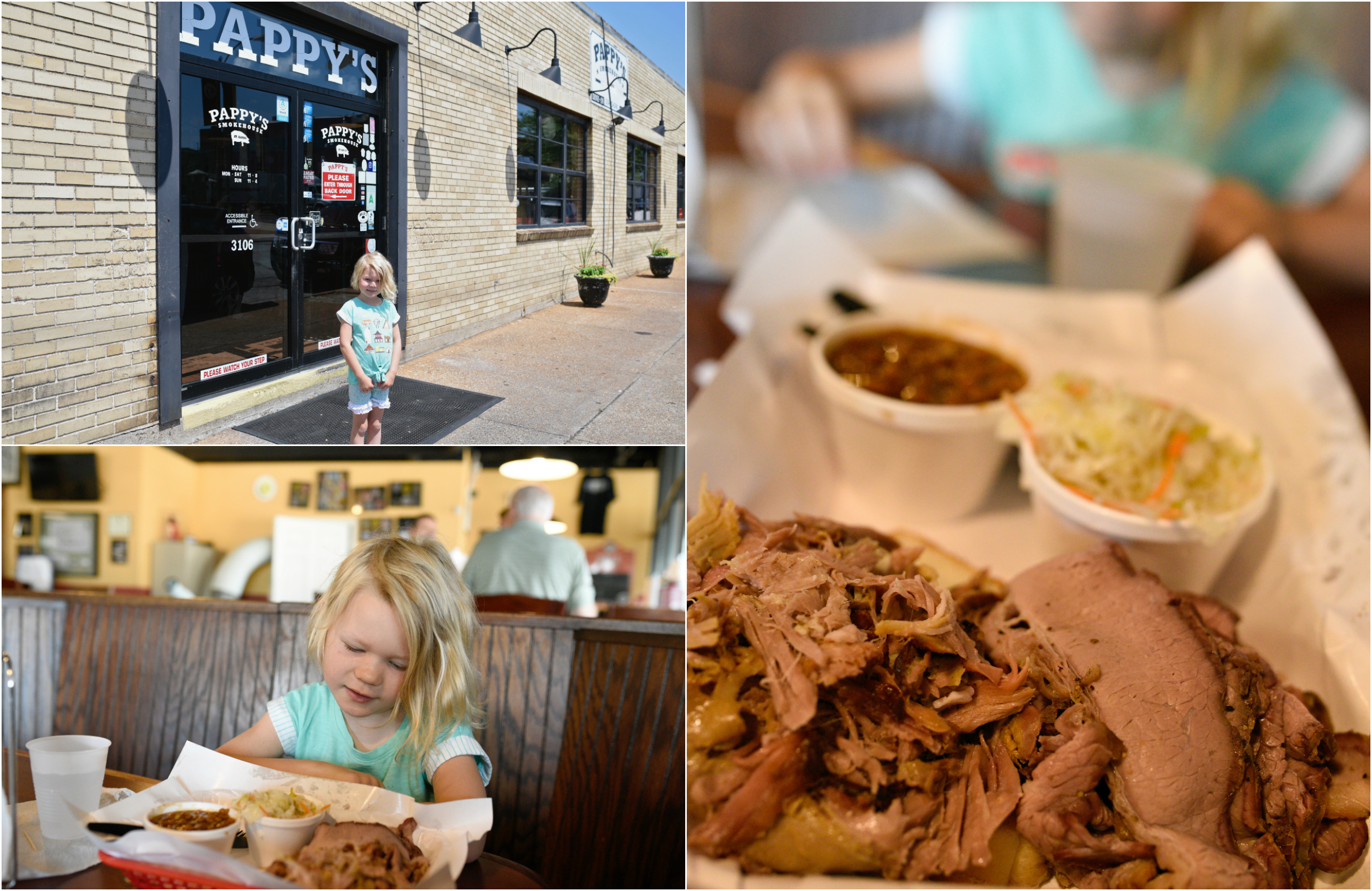 Fitz’s was another place a few people recommended.  Milana is not a soda drinker, however I love a good homemade soda.  I was very happy to hear they use real cane sugar and not high fructose corn syrup, but didn’t realize they add dyes to their drinks so my excitement was short lived.  I tried the black cherry, which wasn’t very good at all. The food here is not very good, typical greasy food.  I would skip this place though it’s probably the nicest neighborhood we have driven through on our entire trip so it may be worth it just for that! 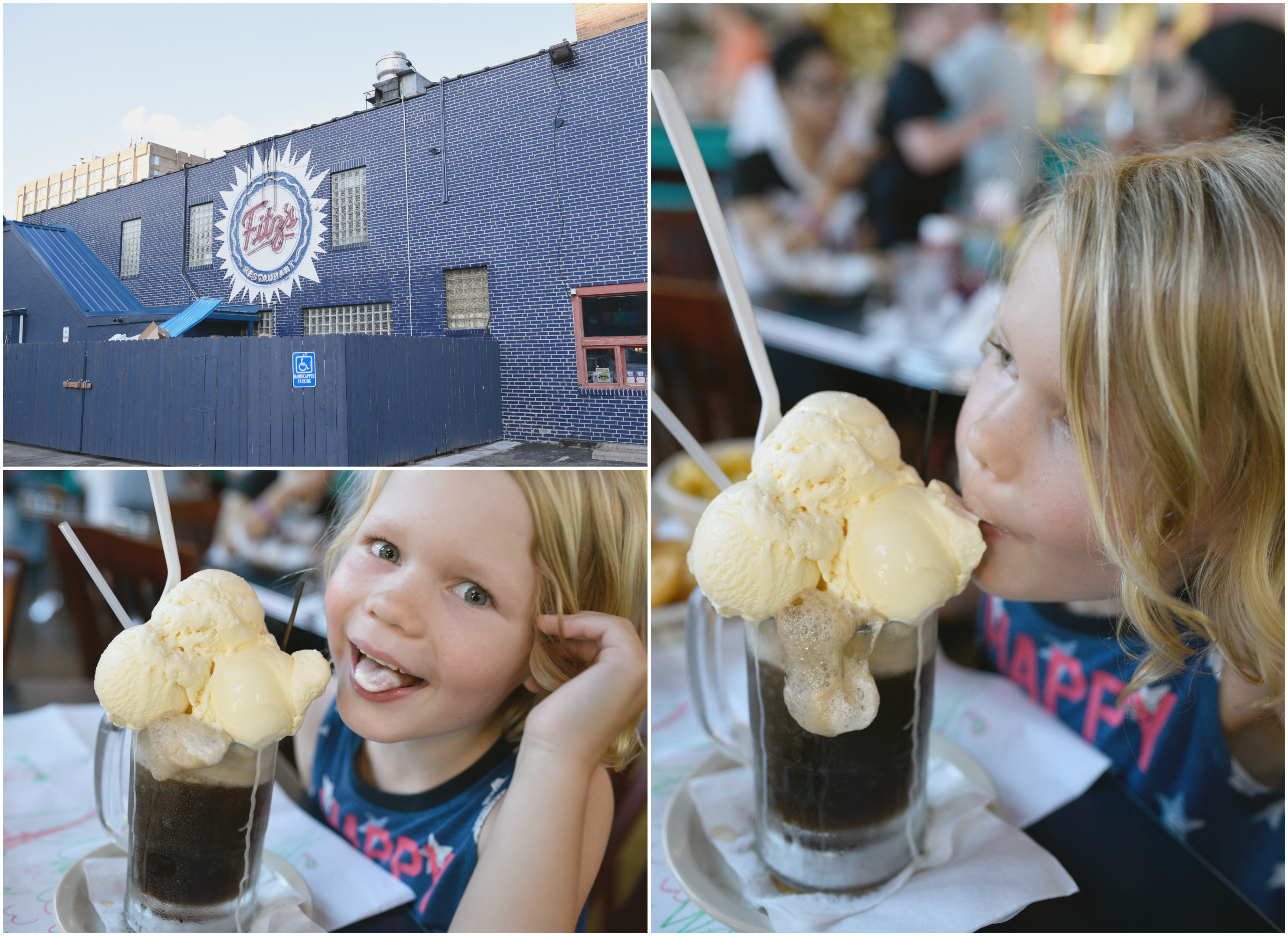 I heard about Crown Candy Kitchen from a blog and decided to try it. I love old fashioned ice cream parlors and Milana was excited for some candy. Keep in mind, this isn’t in the best neighborhood and if I can give one tip for St. Louis is to not use Waze when navigating around the city, we have found ourselves on back roads in the middle of neighborhoods we shouldn’t have been in on more than one occasion because of how they route you.  I switched to google maps for the rest of our trip and we avoided back roads for the rest of our trip.  I had the banana shake here, which was great but sadly Milana didn’t get her candy. She wanted a little bit of a few things but they make you buy 1/4 of ONE type of candy, which is absurd. We would have ended up with over a pound of candy since she wanted 5 types.  We ended up going to another candy store after. 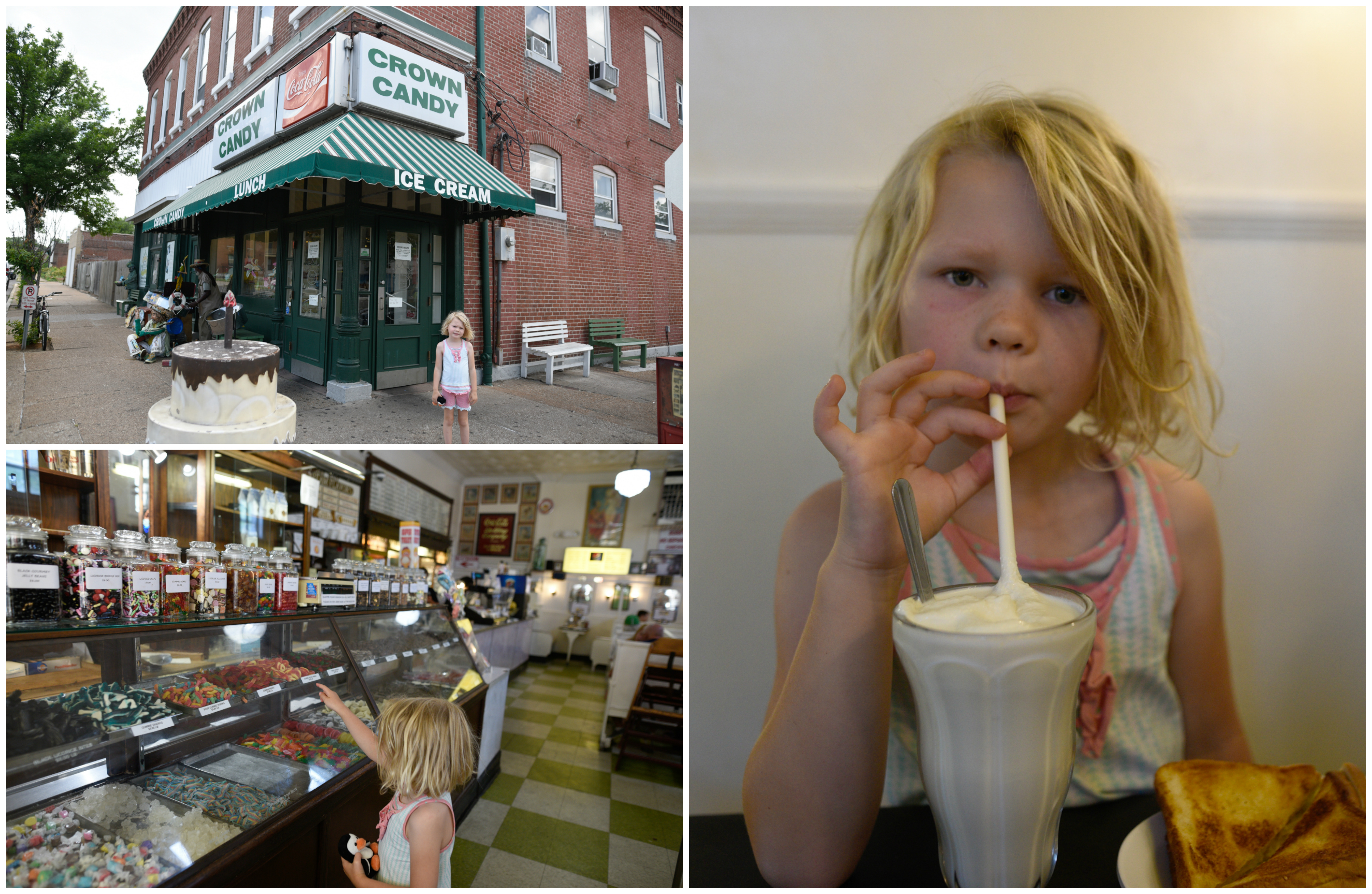 Another dessert place we tried was Ted Drewes Custard.  I can’t remember which we went to, but the one we tried wasn’t in the best neighborhood so research before you go! The custard was really good and keep in mind they have vending machines at the airport that sell it as well in case you can’t make it here.  Our hotel had a few flavors too in their freezer.

But our favorite dessert in St. Louis was the gooey butter cake! When Dave and I came here, we ate lots of it at Park Ave Coffee.  It’s still as good as I remembered and we ended up ordering a full banana one to take home! 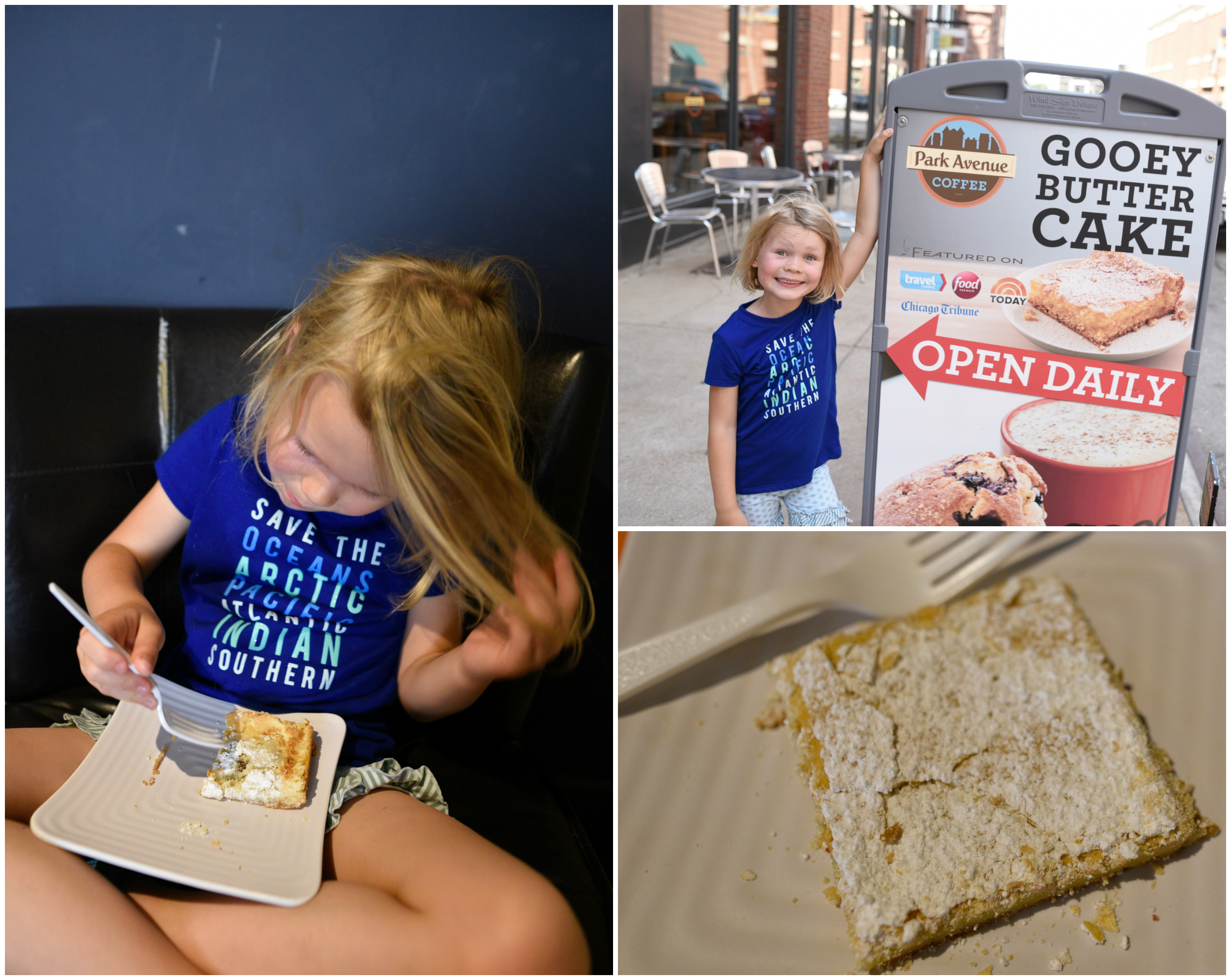 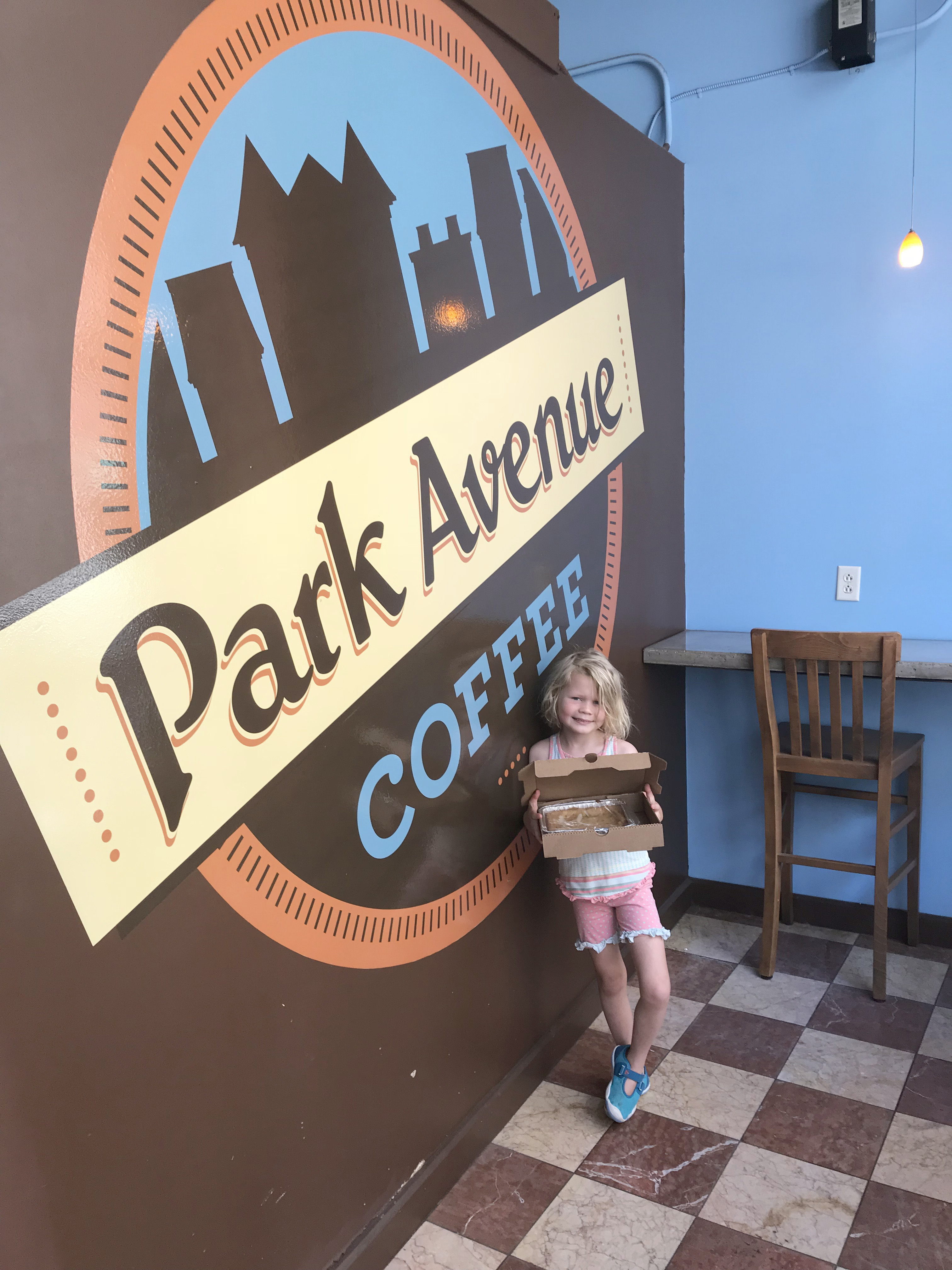 Overall, we had a fun few days in St. Louis. It’s definitely not a city we would return to but Milana is happy that she got to see the Arch and visit the City Museum. 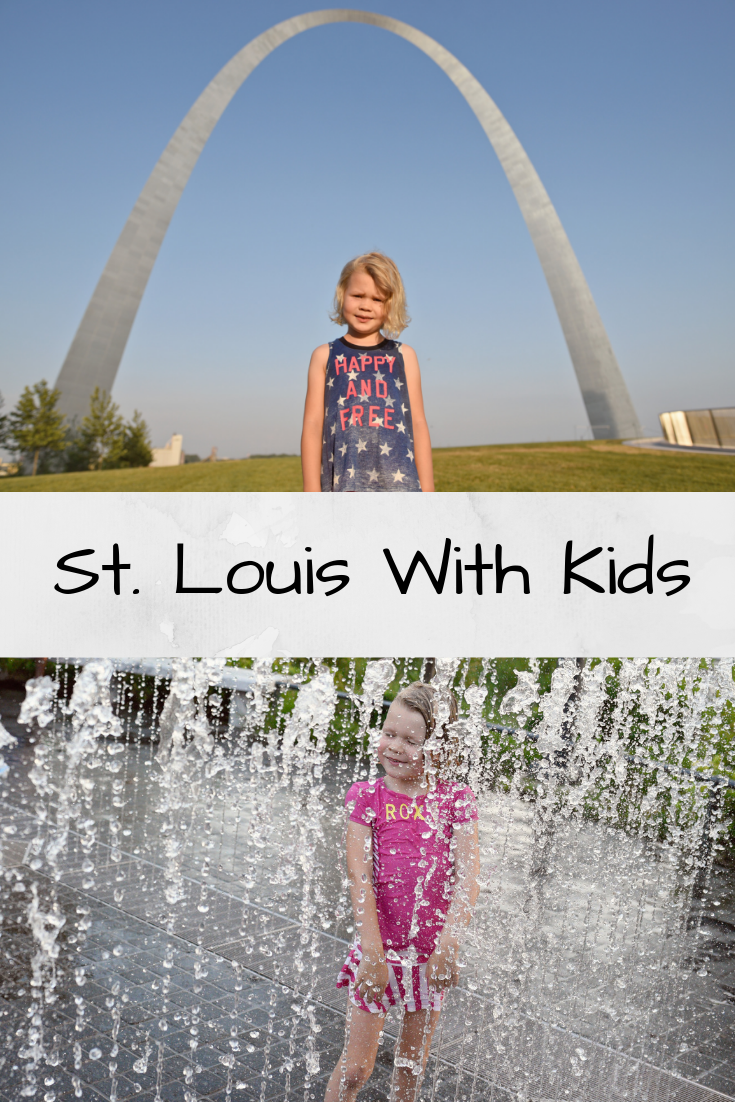 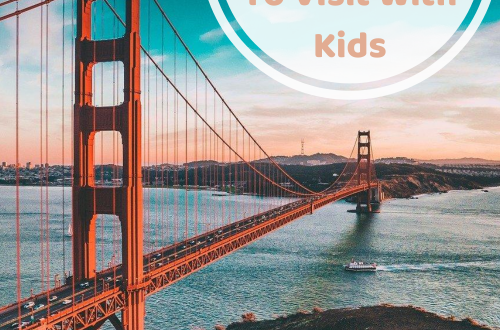 10 Best US Cities to Visit with Kids 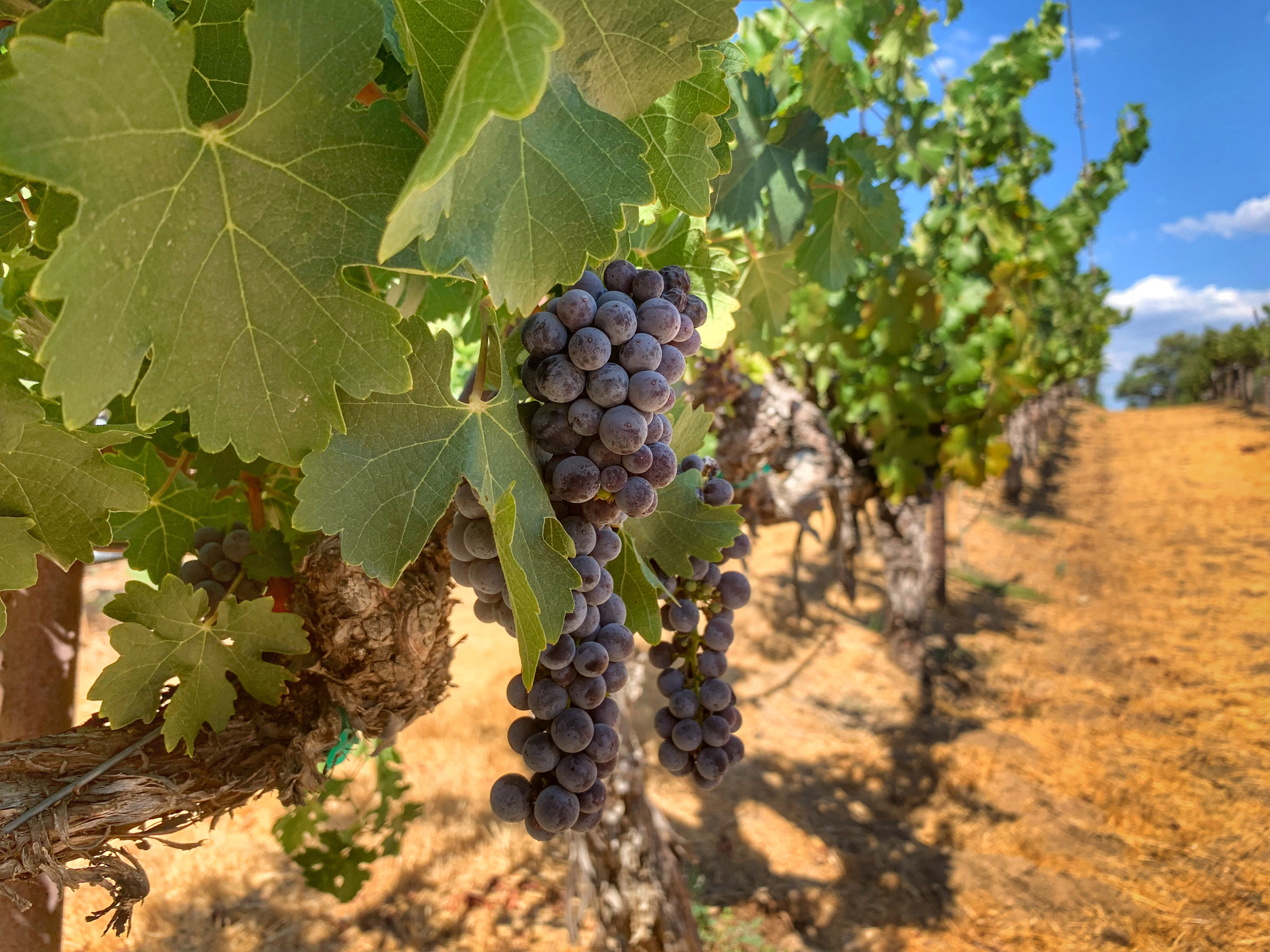 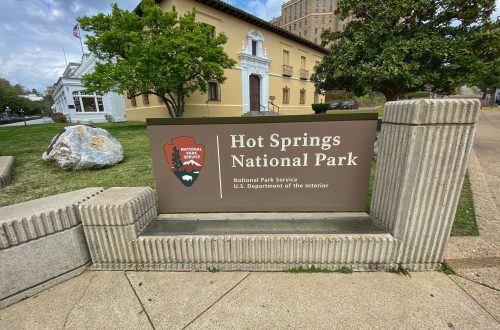