Since getting the Southwest companion pass, I have decided to take Milana on trips around the US.  A week after getting back from Chicago, we headed on a mom-daughter trip to Portland, Oregon.  The flight was free using Southwest points/companion pass and I used Marriott points for the hotels, making them free as well.  We split our time between the Courtyard Portland City Center and our last night at the Courtyard Portland Airport, since we had an early flight to Seattle the next morning. As a gold member, I got upgraded to a suite with a separate bedroom and sitting area. 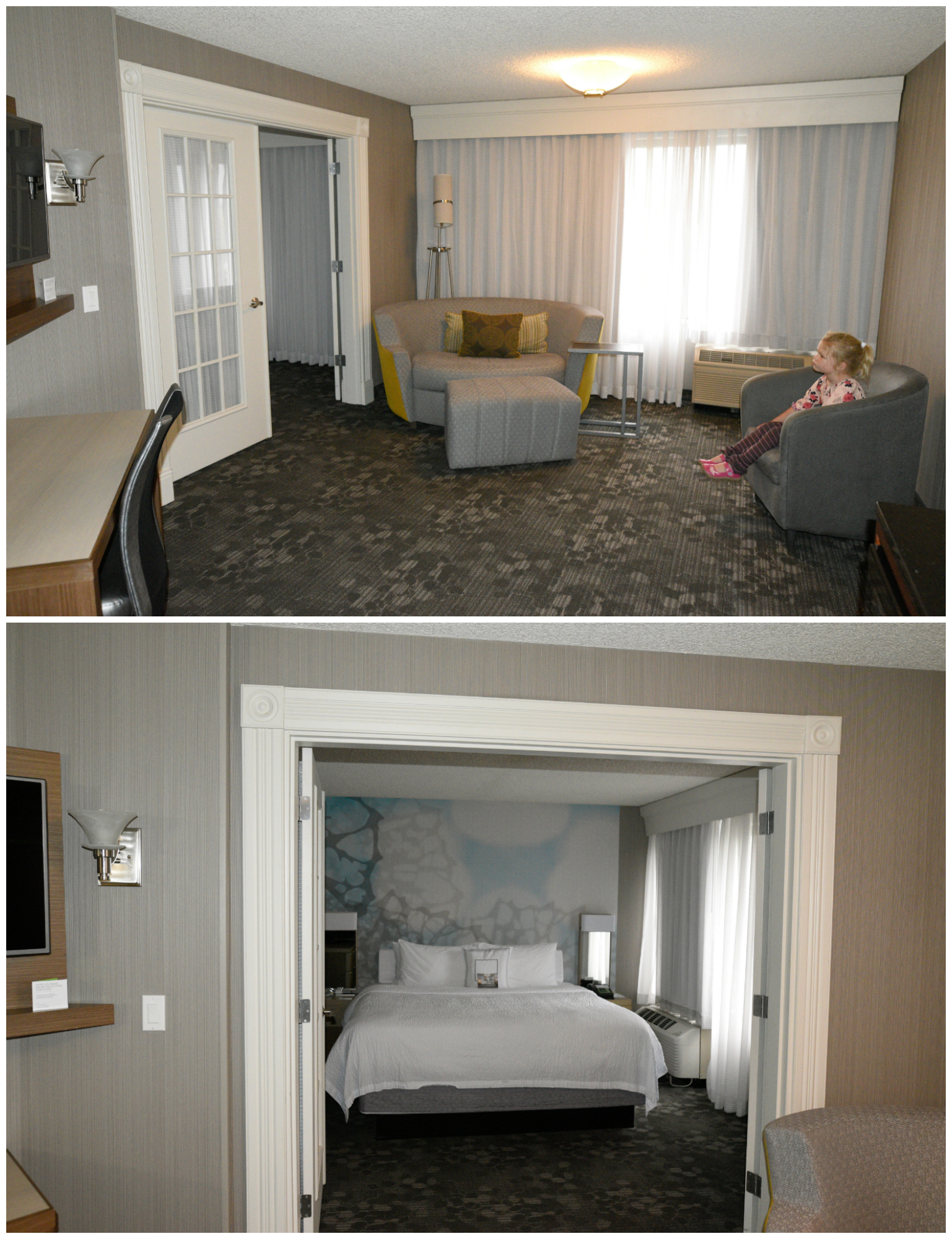 There is lots to do in Portland with kids! We only had 3 days but managed to fit in a ton in that short time. While the city is known for lots of rain and not so great climate, our first two days there were sunny and in the high 80s even though it was late September! Our last day was cooler and just a little drizzly at times, I think we lucked out in the weather department!  One of the first things we did was head to Jamison Square.  I found this little park on Yelp and loved the splash area they had for kids.  Since it was super hot, it was the perfect day for it!  There is a little “pool” of water that fills up every several minutes and stays in just that area.  Milana loved this and had a blast running through the water.  At one point, the water was nearly waist deep!

Portland has a children’s museum like many cities, and theirs is located inside Washington Park.  There is a zoo, rose garden and an awesome playground inside Washington Park so you can make a full day out of it!  The museum is cute and their art area is awesome. We spent quite a bit of time in the art room/creativity room since it’s Milana’s favorite thing to do. 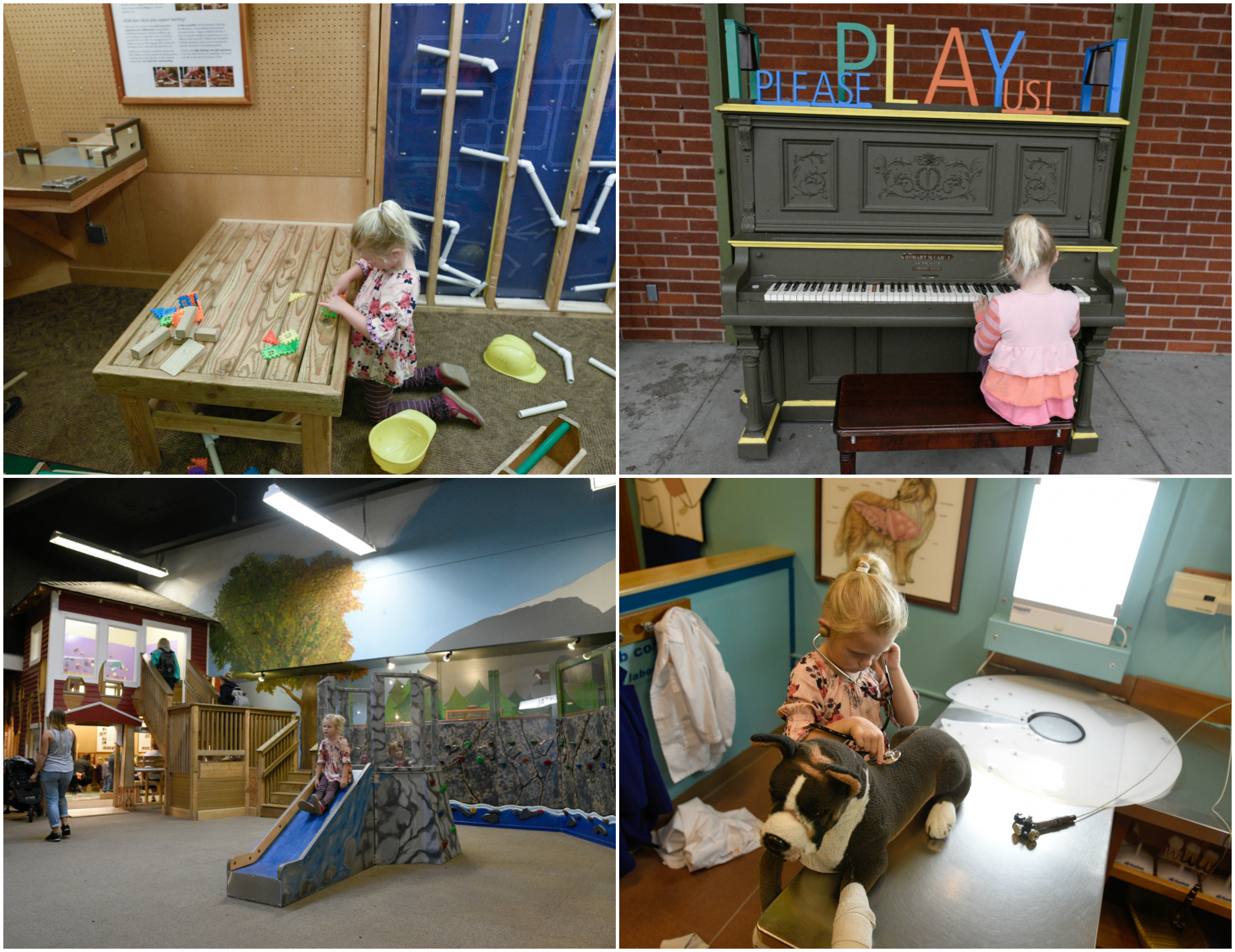 Another super fun museum was the Oregon Museum of Science and Industry. Because they are members of the ASTC Passport Program, we had free admission using our local museum membership card.  If you aren’t familiar with this, check out the ASTC website to see if your museum participates. We pay $125/2 years for our local science center and in turn have access to hundreds of free admissions all over the country and even some international ones.  On this trip alone, we have saved over a $100 on museum admissions!

This museum is awesome and their science playground for kids is actually even better than the actual children’s museum! 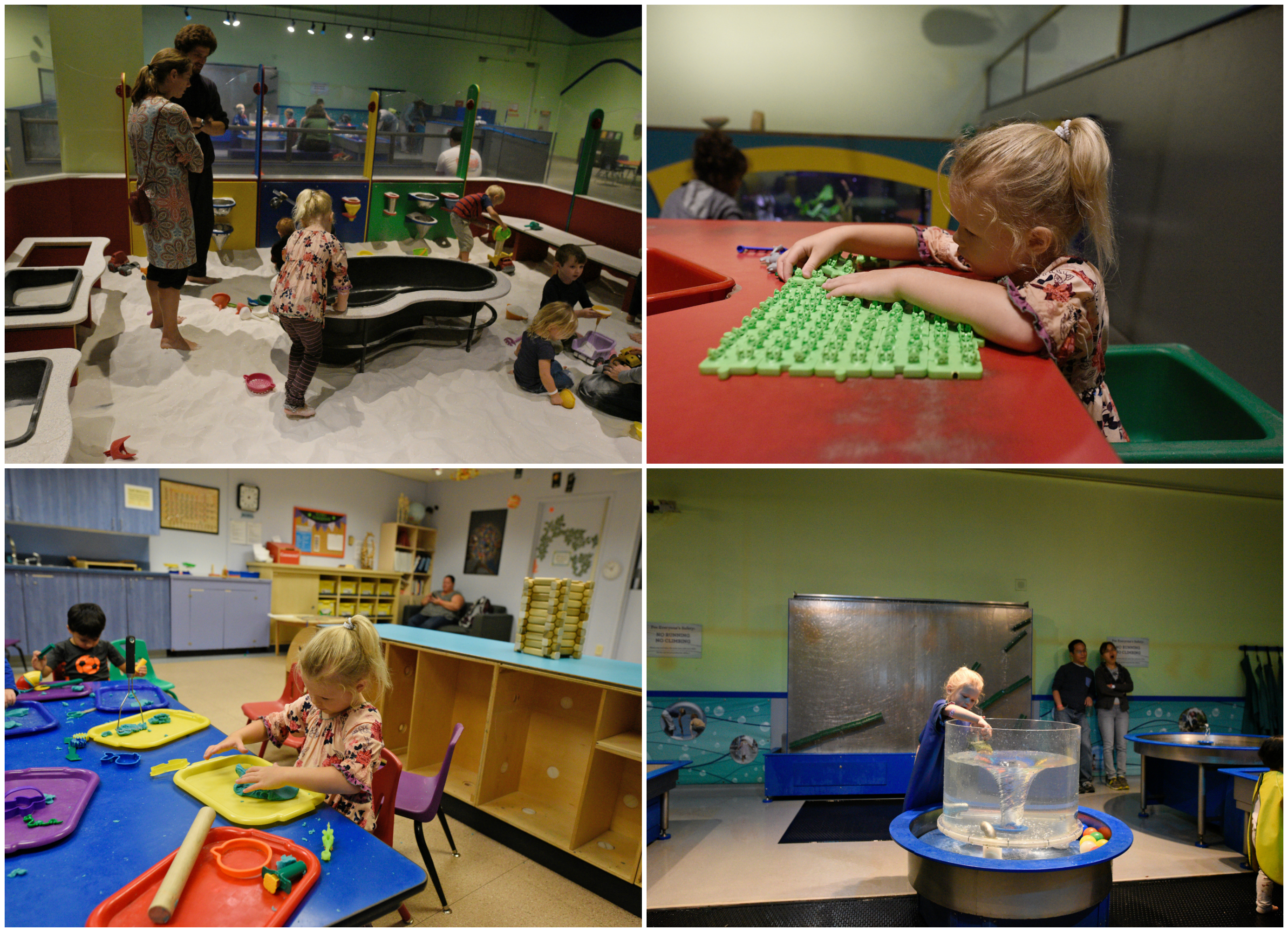 As I mentioned, the Washington Park playground is located nearby as well and if you like visiting playgrounds on your travels, this one shouldn’t be missed!

Another really awesome playground and Milana’s favorite was Westmoreland park.  We rented a car for a day to explore this park, the pumpkin patch and Forest park because they were far from the city center and would have cost a ton in Uber rides. The car rental for the entire day cost just $30 which was perfect!  I brought the Mifold car seat on this trip since we weren’t in the car much and she is well over the age/weight limit and it was perfect and compact!

Westmoreland Park isn’t your typical playground. It’s a natural playground with some awesome climbing structures that are made out of logs.  They also had a super fun water area to play in and since it was very hot, we spent lots of time here!  The area surrounding the playground is super cute too, with a duck pond and small stream. Perfect for exploring!

Since it was late September, we went to the Pumpkin Patch at Sauvie Island.  I highly recommend visiting this place in the fall! They have an animal barn, a huge corn maze and a really big pumpkin patch.  Their store is great as well, and we grabbed some giant apples for the car ride to our next destination. 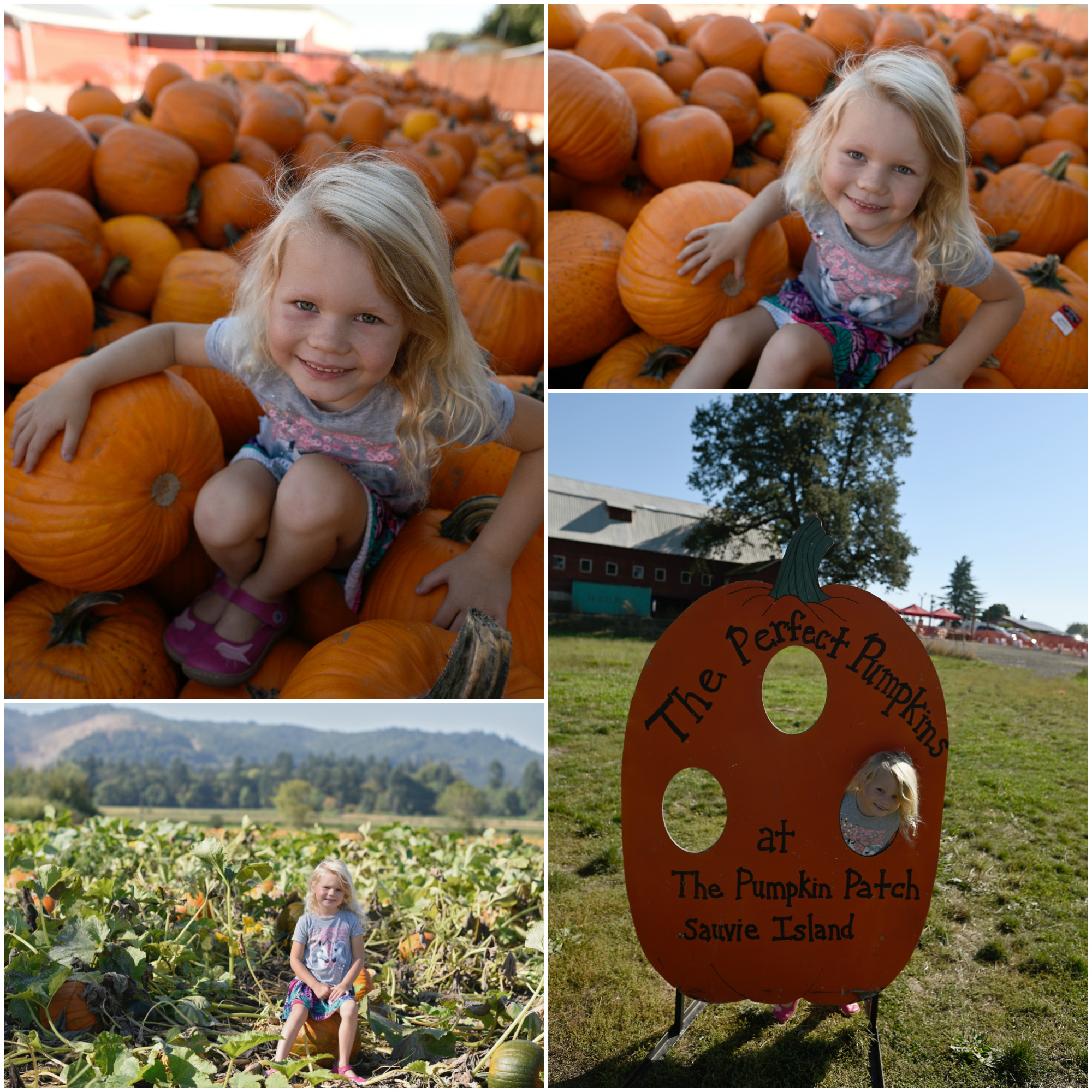 After the pumpkin patch, we headed to Forest Park.  We don’t have forests like this in SoCal and Milana asked to go on a walk in the woods so off we went! We walked for about an hour and it was perfect.  This is a great place for little kids who may not want to walk much! 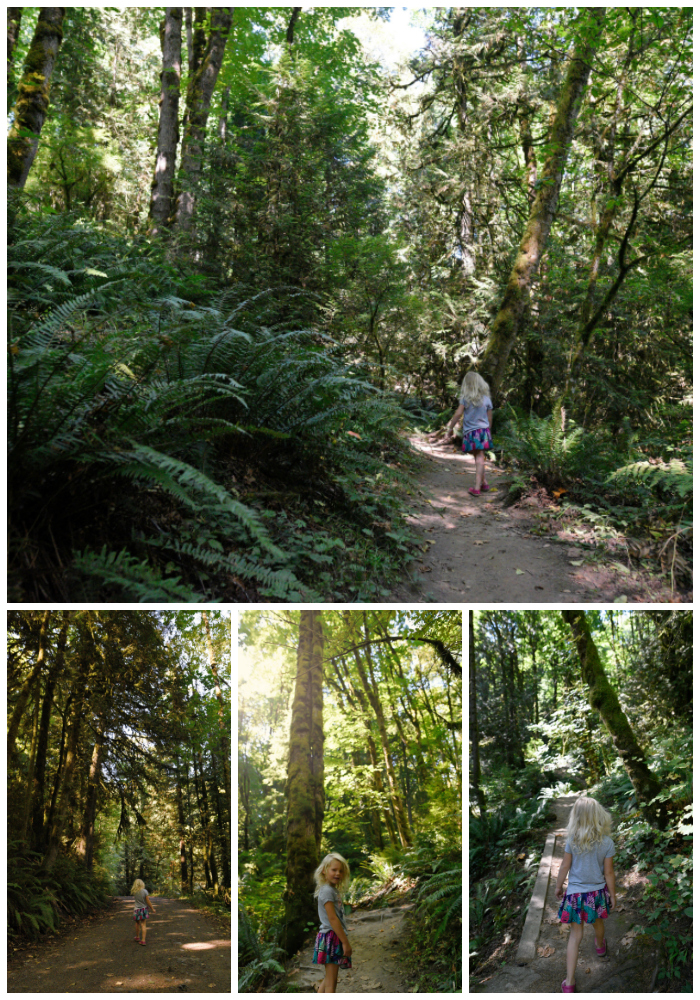 A couple of blocks from our hotel was Finnegan’s Toys and Gifts.  We love visiting and supporting local toy stores so we headed here one day to shop.  Milana picked a few Playmobil animal packs which are small and perfect for travel.  She brought them to restaurants and played with them on the plane ride home.  I highly recommend them! 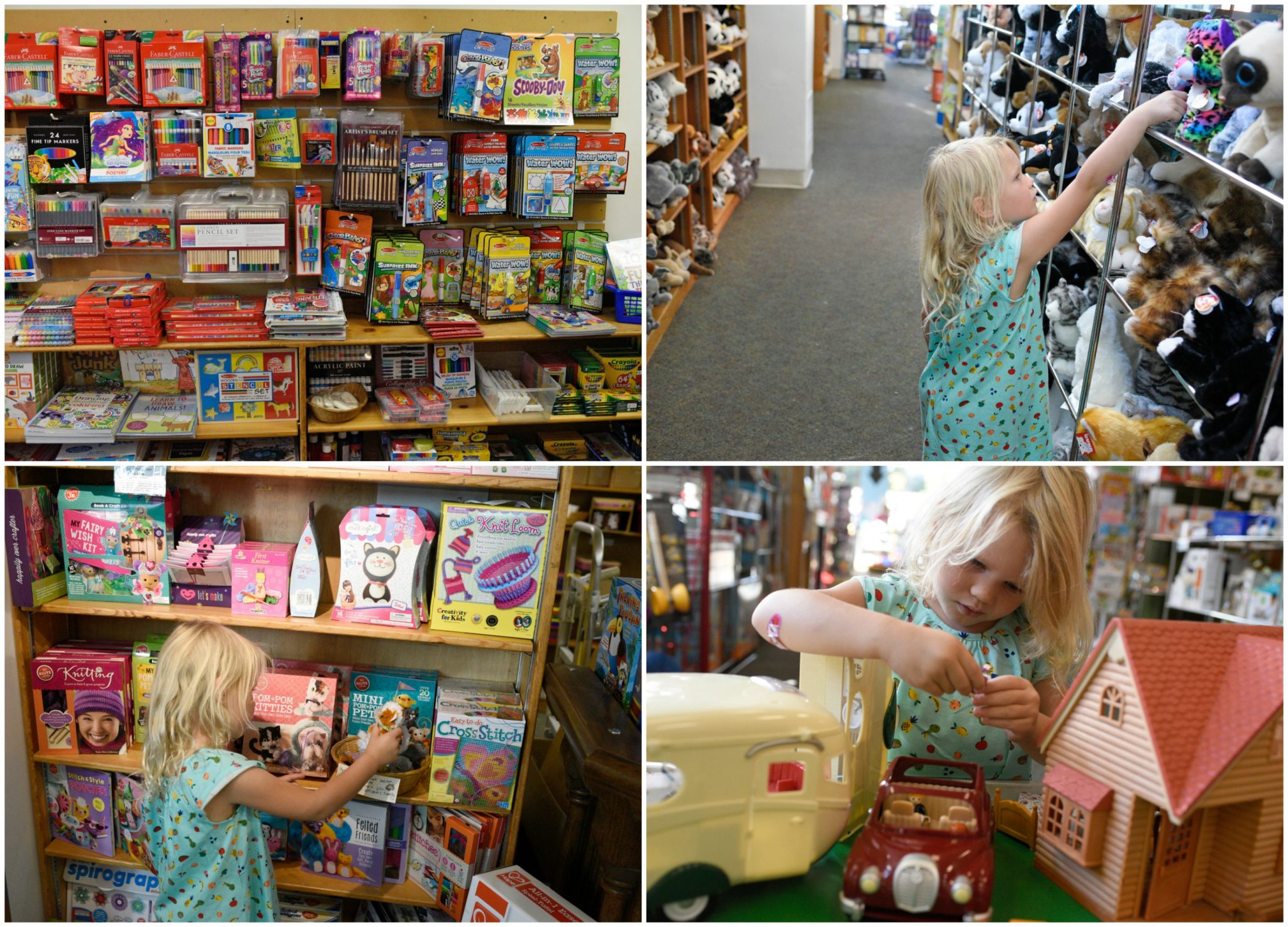 Milana loves books so I had to take her to the biggest bookstore in the world, Powell’s! She was mesmerized by all the books and picked a couple to take home. 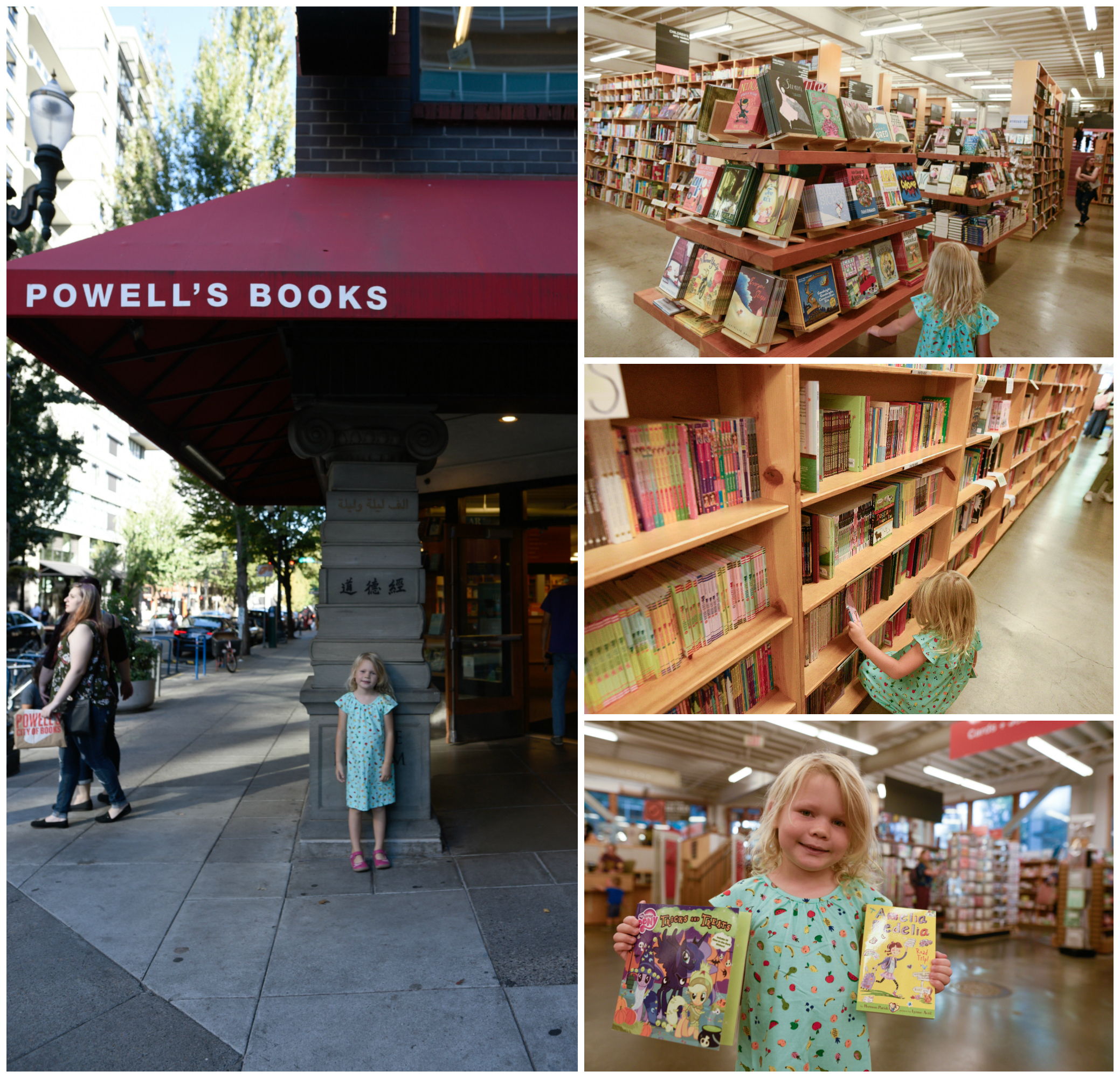 One of our favorite things to do while traveling is eating! Thankfully Milana loves food and will eat pretty much anything so we aren’t stuck to boring places with awful kid menus.  A fun family-friendly place in Portland is Hopworks.  The food was really good and they even have a kid play area. Their ingredients are great too, lots of organic options on the menu!  Milana ordered the pretzel dog but wasn’t a fan so she ended up eating the pretzel sticks with mustard instead.  I had a salad, which was great.  And a beer sampler.  Have some beer while your kids play, it’s a win! 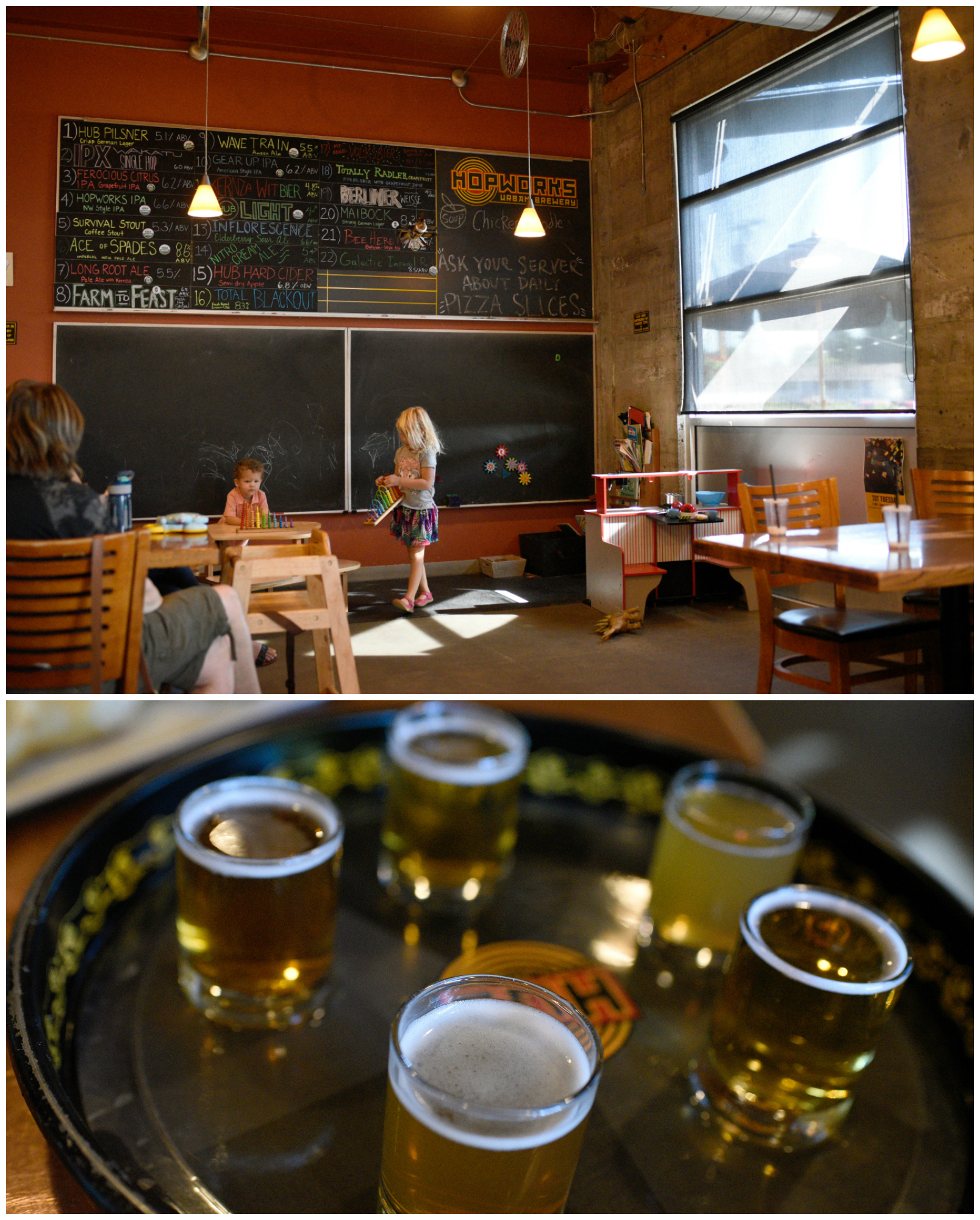 One of our favorites Portland was the Laughing Planet Cafe.  Great quality, healthy food. And each table had dinosaurs to play with, which makes it great for kids! Their kid menu is awesome.  Kids can pick 3 or 4 different items that are served in separate bowls.  Milana chose the rice, beans, corn and chicken.  They use all natural ingredients, which makes it even better! 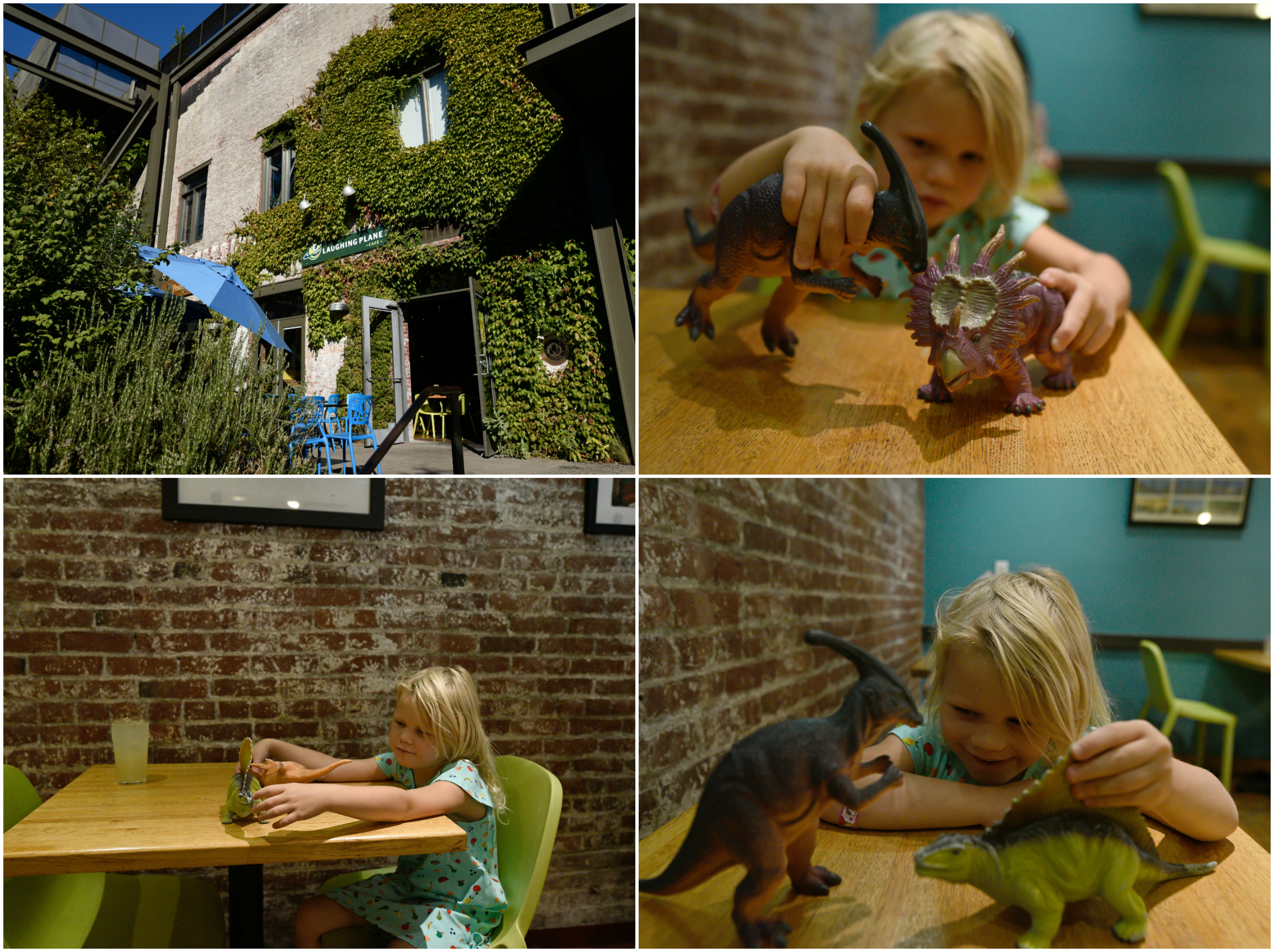 Down the street from our hotel was Mother’s Bistro, a very popular breakfast spot! We went for dinner one evening and sat near their small play area.  I wouldn’t make a trek here just for the play area, but it was definitely nice to have!  We ordered the pierogi and cauliflower cheese soup, Milana loved both! 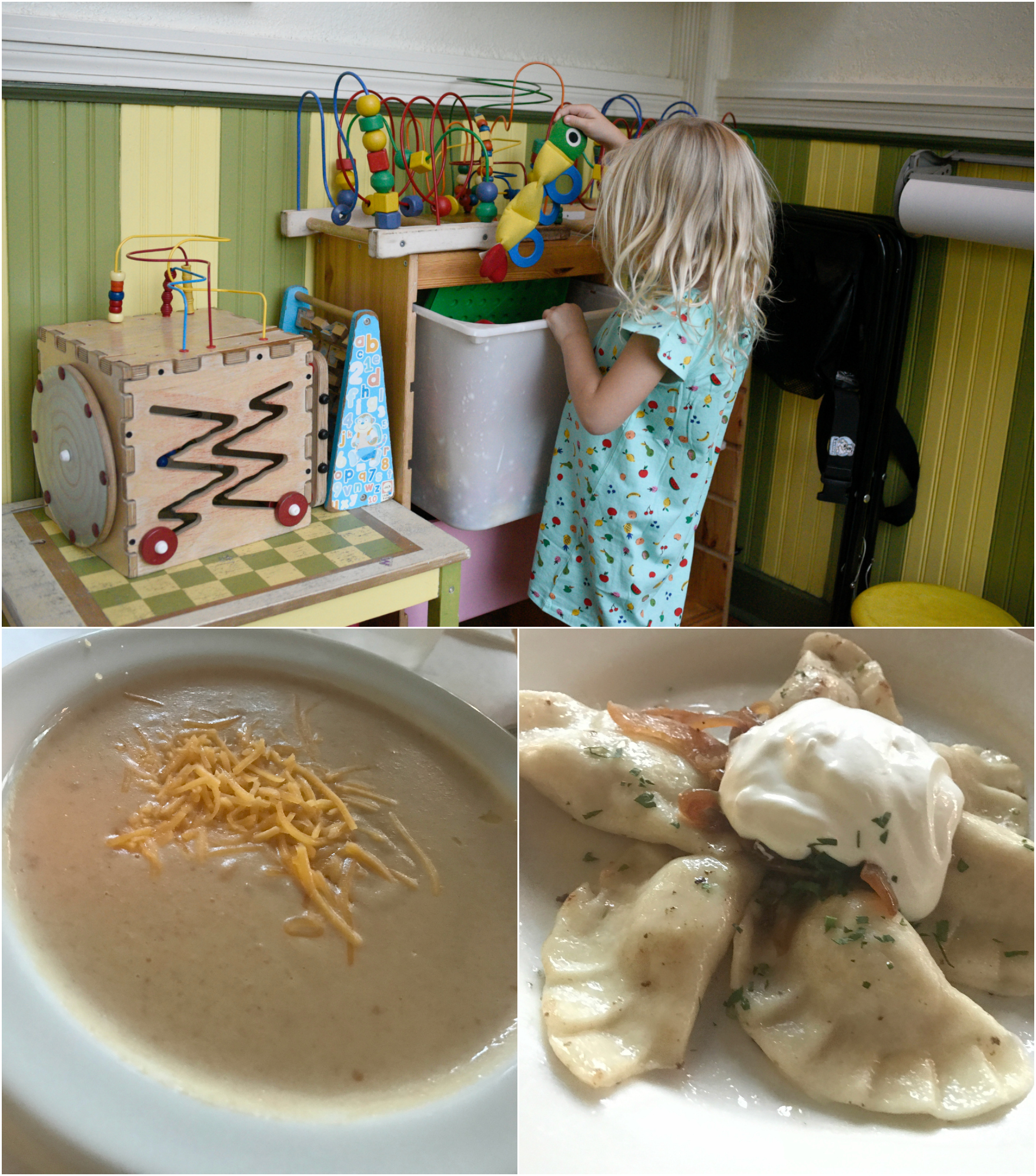 A super popular breakfast spot is Tasty and Alder.  We went on a weekday and it was packed! I can only imagine what the weekends look like.  The food here is awesome but if you have a picky eater, it’s probably not the place for you.  We ordered the cheese plate which was Milana’s favorite, she devoured most of it herself! And the marionberry French toast, which she loved as well.

One afternoon, Milana asked for some pasta so we headed to Grassa.  They make their pastas in house (you can watch if you sit at the counter) and they are amazing! You pick your pasta and sauce, it was really good!  We also ordered their cheese platter which is always a hit.

On our last morning, we had breakfast at the Byways Cafe, which was featured on the Food Network.  The place is small and also gets super crowded, so get here early! The food is nothing special but really good! We had ricotta pancakes and Milana had bacon with hers. 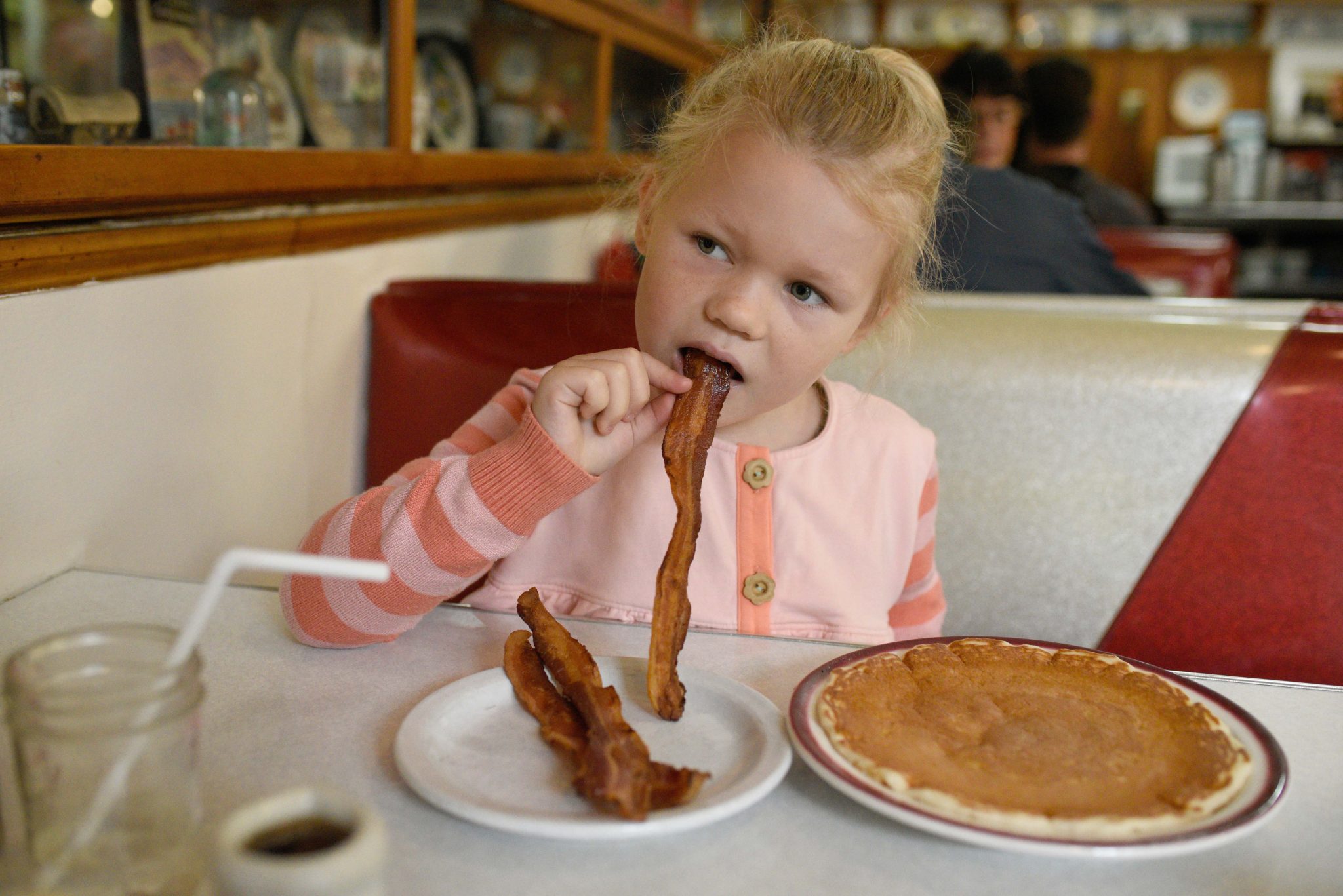 Of course, no trip to Portland is complete without donuts! A short walk from our hotel was Voodoo donuts.  I’ve been here before Milana was born and wasn’t really a fan and have to say the same thing this time as well. Thankfully there was no line and only a few people in the store when we went.  The donuts are nothing spectacular, I think they are popular just because they are so well-known. Milana did love her voodoo doll donut! 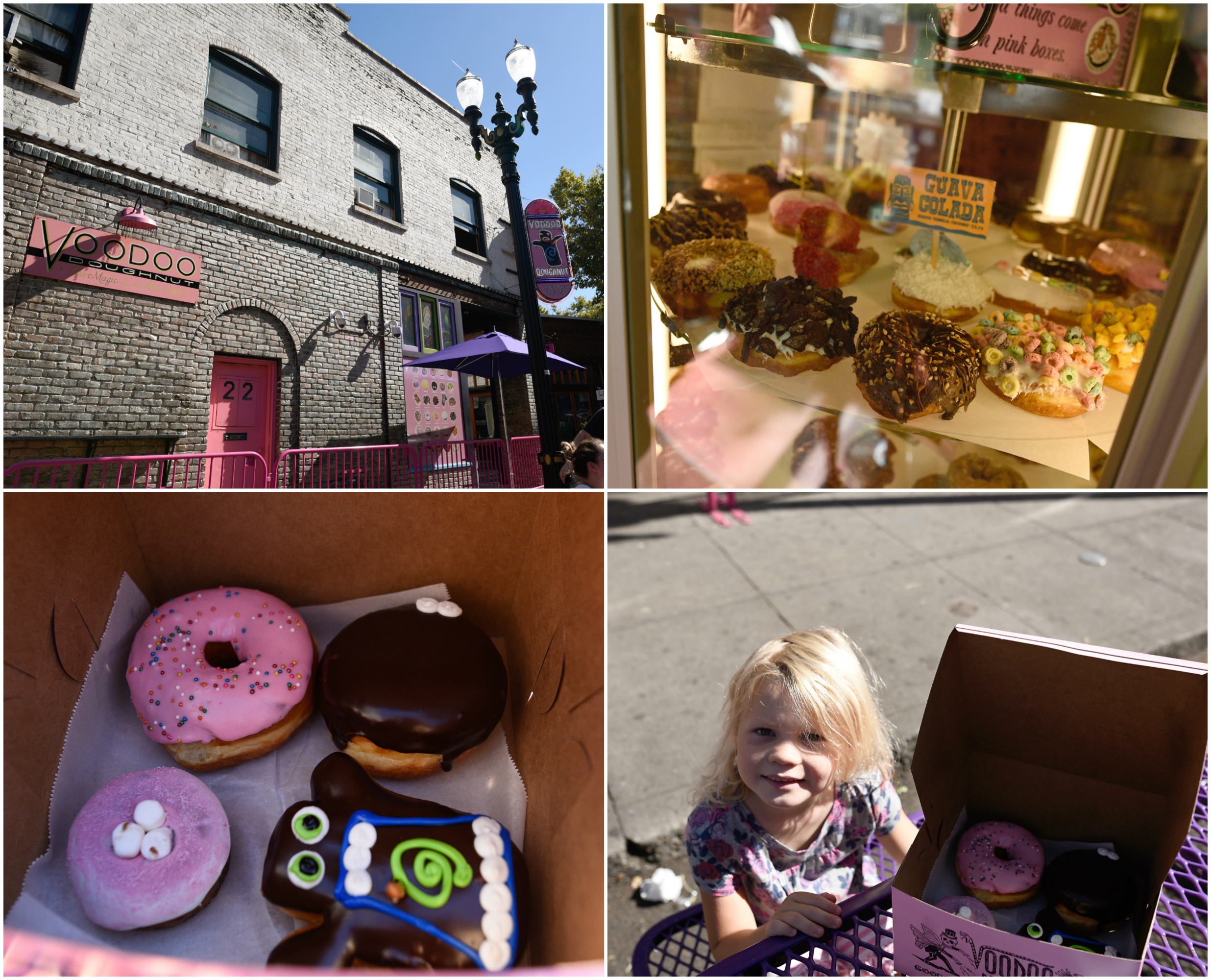 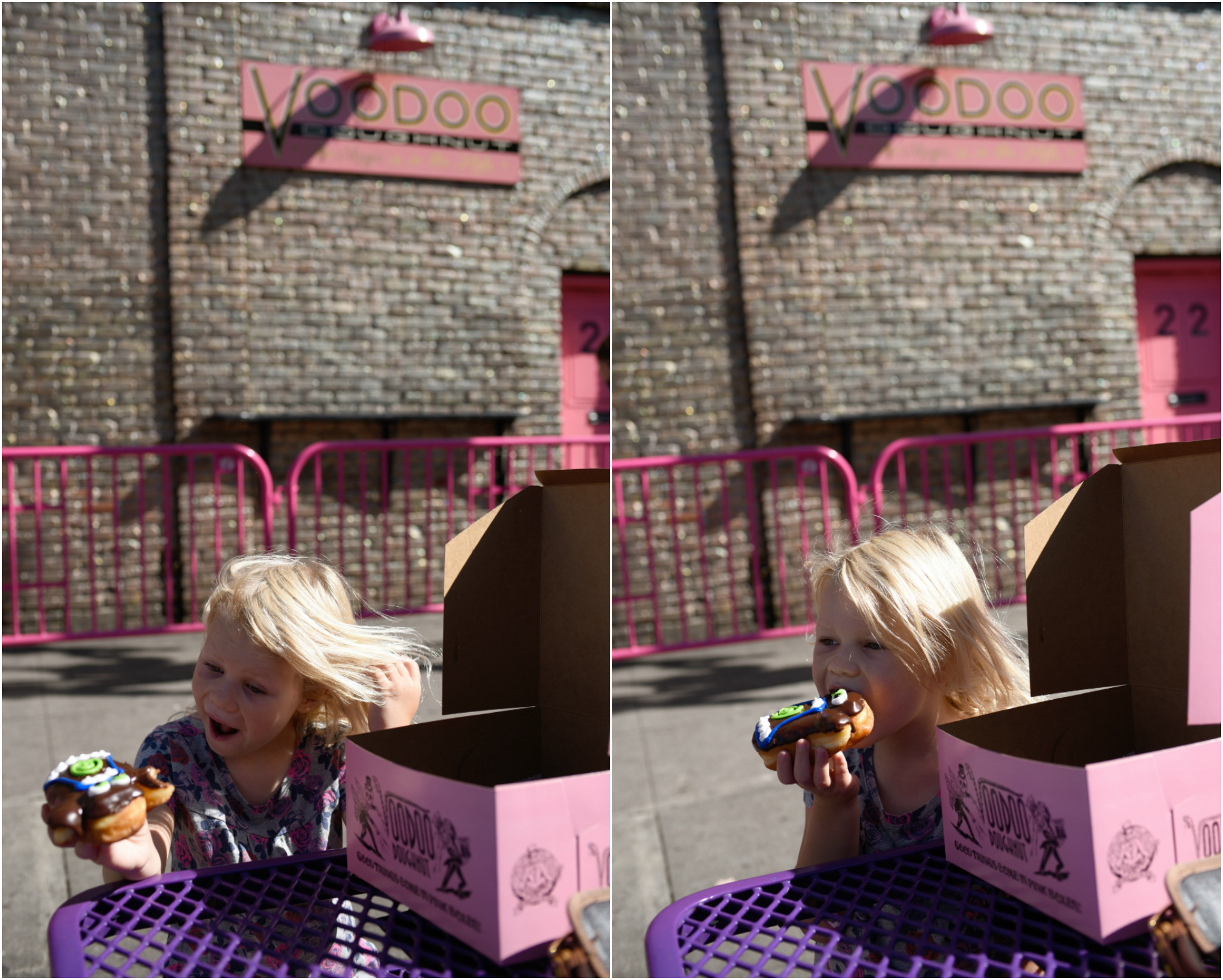 A much better donut place was Blue Star.  Their ingredients are great and the donuts are super fresh, no matter what time you go. I highly recommend them over Voodoo!

If you’re in the mood for some Frozen Yogurt, Eb and Bean is the place to be! Organic, probiotic-rich with lots of organic toppings that are free of artificial colors/flavors.  We loved this place and wish we had one near us! 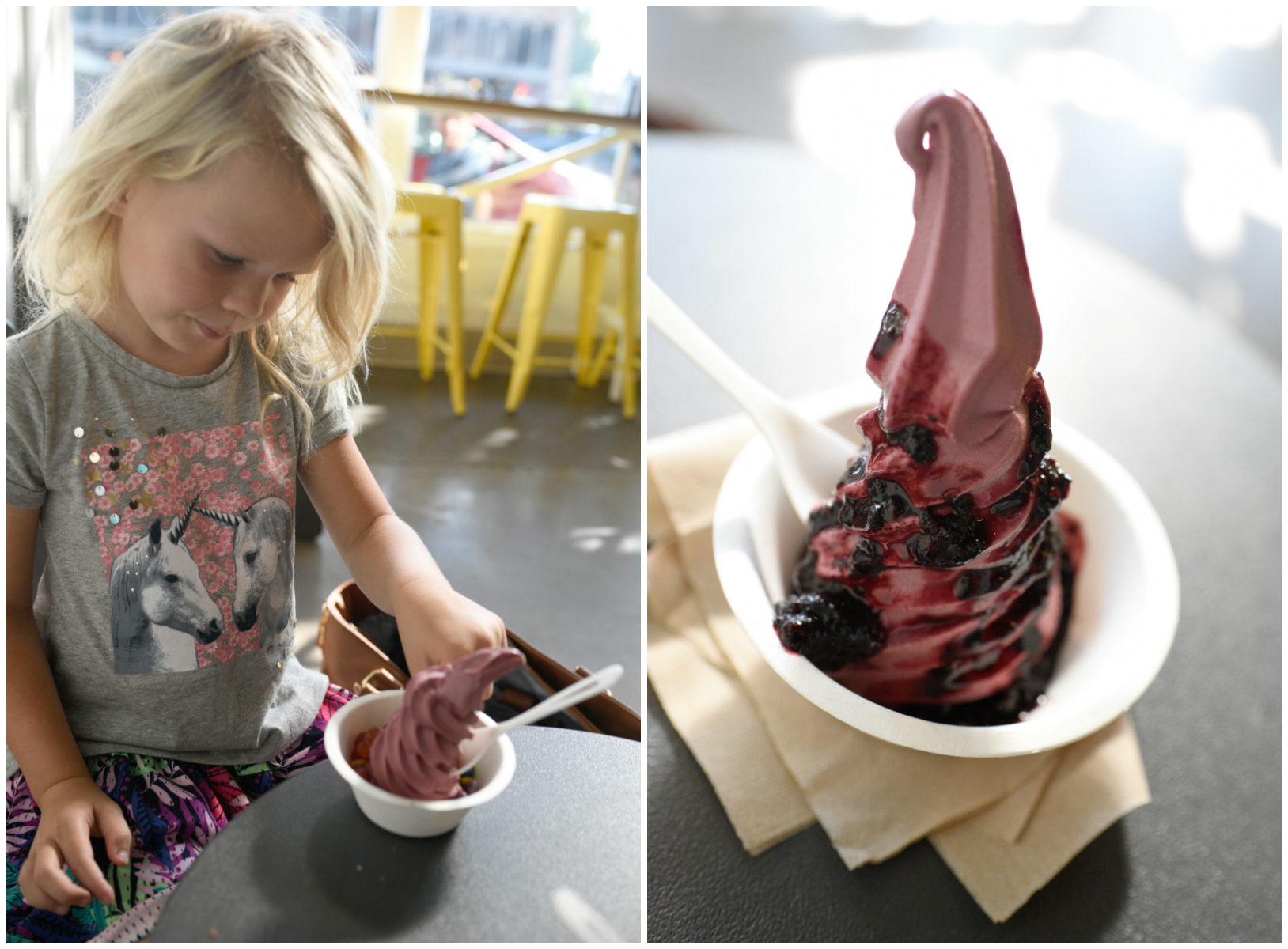 3 days in Portland is more than enough to explore the city! We had so much fun on our mom-daughter trip, that Milana didn’t want it to end.  So we ended up rerouting our flight home (yay for fee free Southwest changes!) and went to Seattle instead for a few more days. 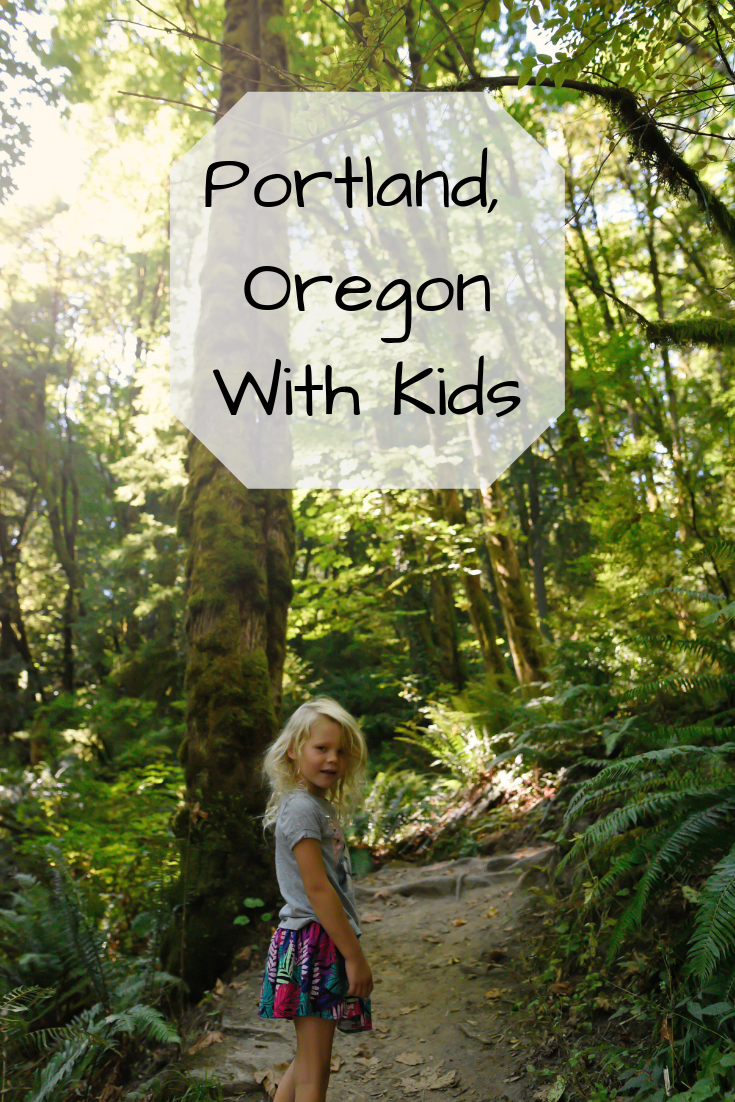 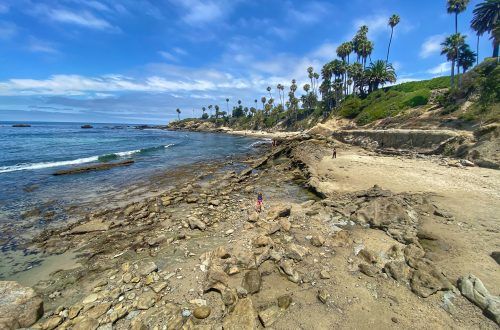 Things To Do In Orange County, CA Besides Disneyland 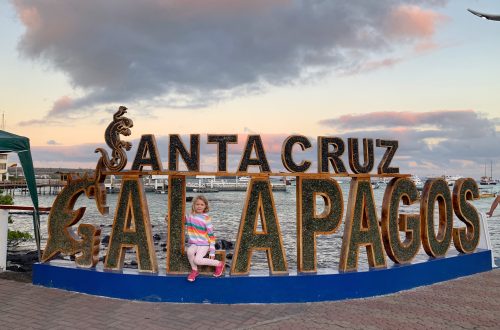