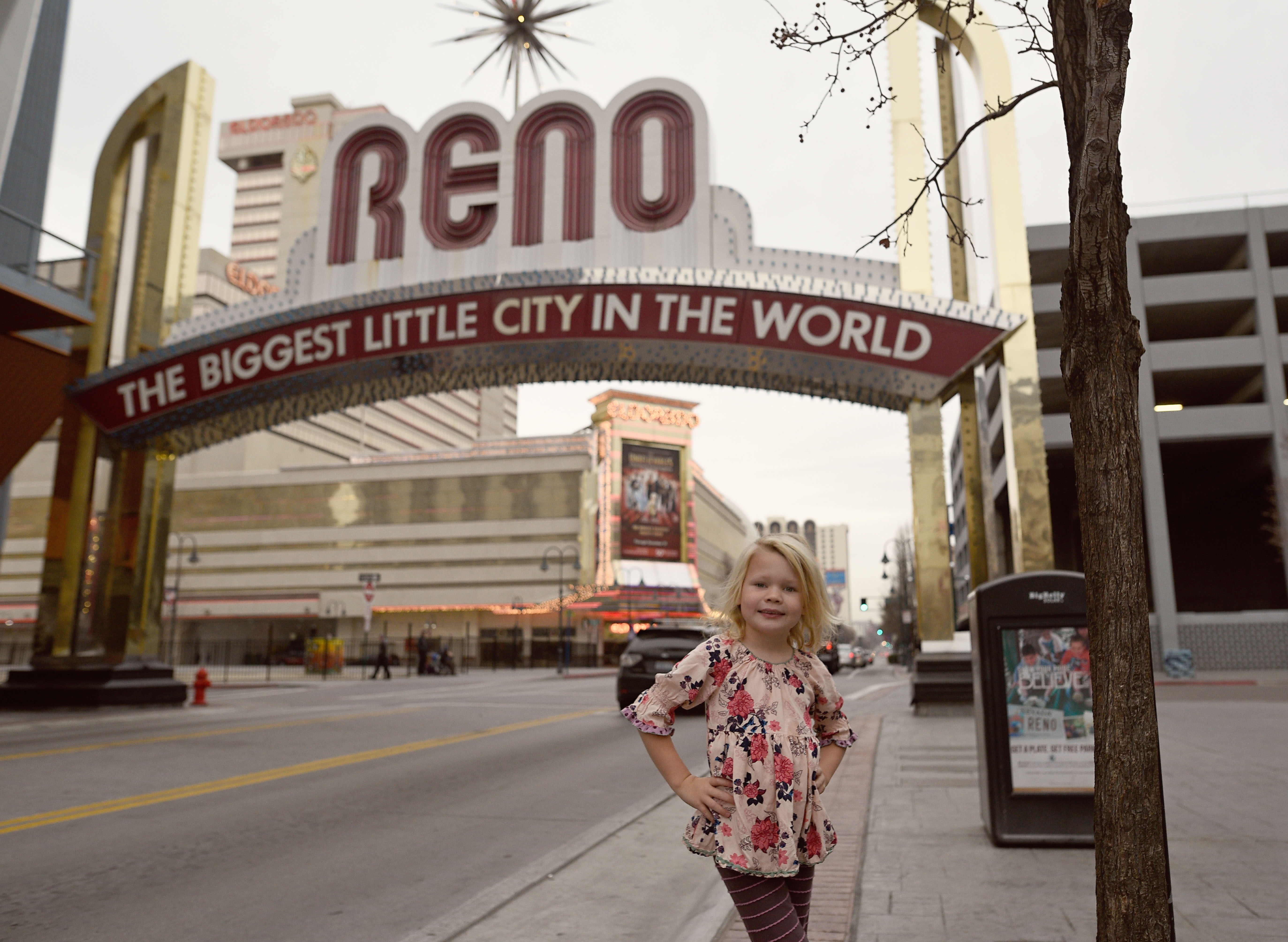 Every year, I take Milana on a mom/daughter trip on the Polar Express train ride.  We choose a different destination each time so that we can explore a new area. Last year, we did Sacramento and had a blast. This year, we chose Carson City and it was a great few days!

We flew Southwest of course (thank you companion pass!) and it was a super short flight from Orange County to Reno.  We split our time between Carson City, Virginia City and Reno and all 3 have something to offer when traveling with kids.

Since the actual train ride was in Carson City, our first two nights were spent here.  The first night we stayed at the Courtyard using points.  Upon check in, we got an upgrade to a suite which had a separate living room and bedroom with two large bathrooms.  Much more space than we could possibly need, but I’m not complaining!  The hotel was nicely decorated for Christmas and even had a Santa in the evenings! 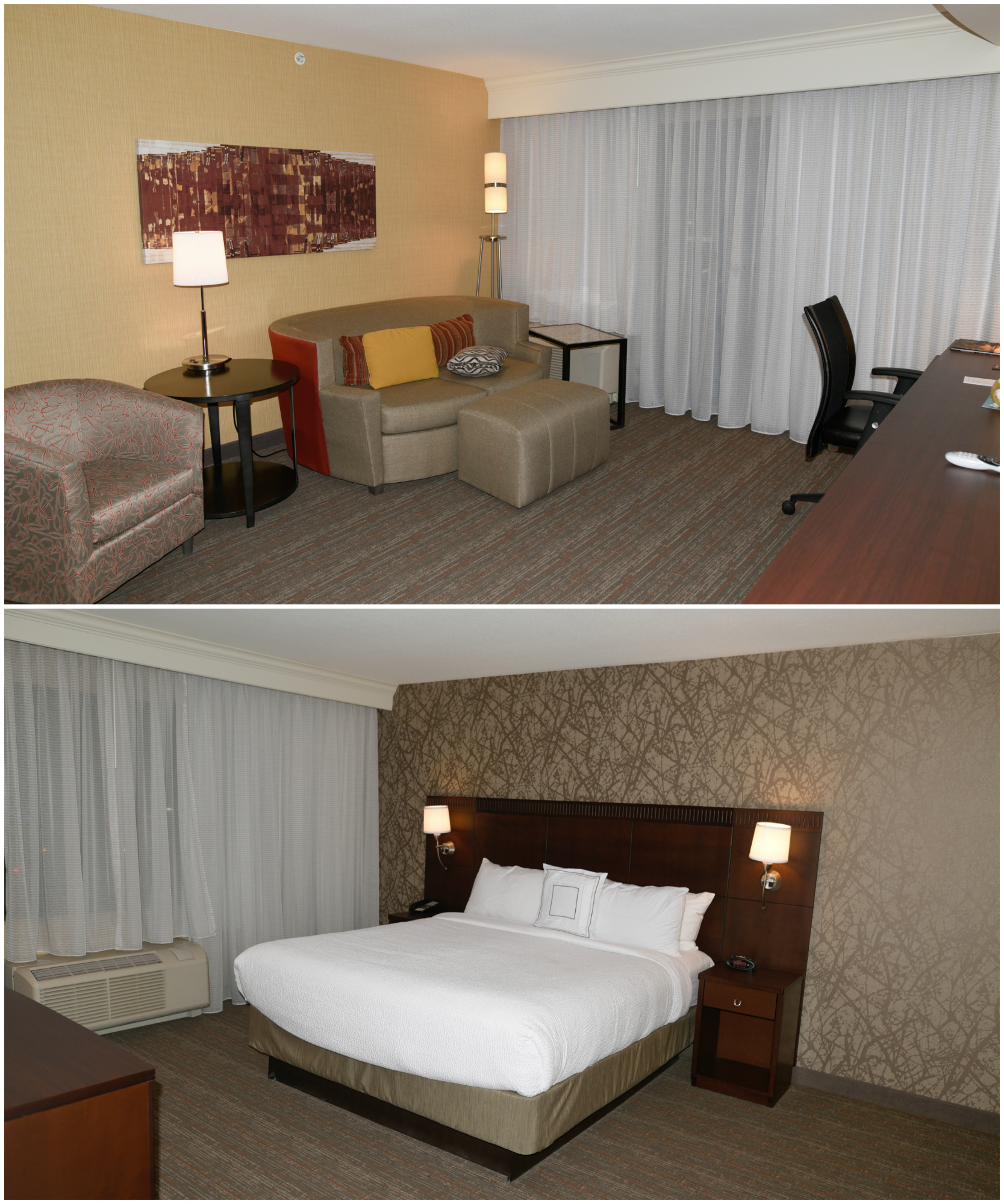 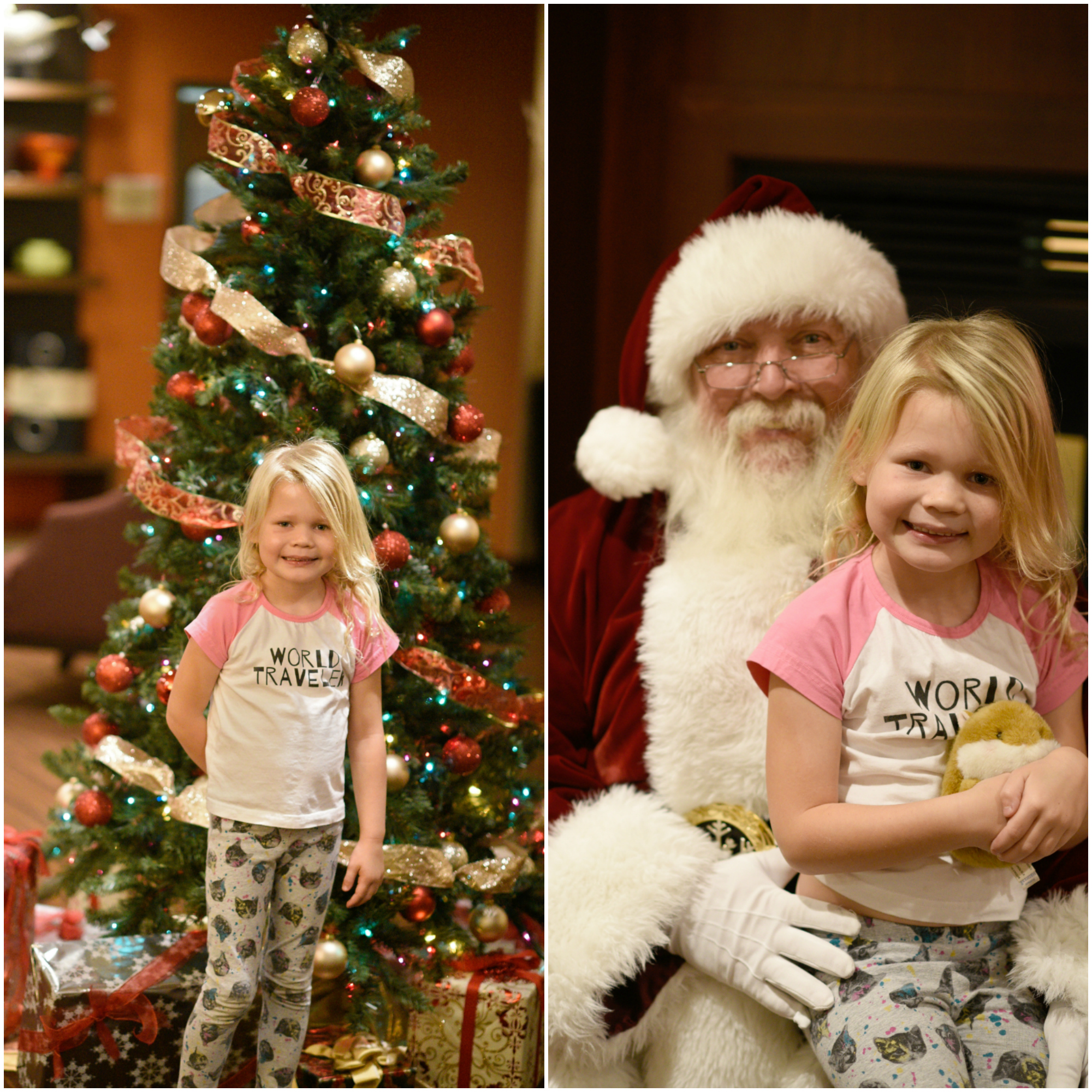 Our second night was at the Hampton Inn, also using points.  I’m not really a Hilton fan, but had some points to burn so we used it. It was right off the freeway, making it super convenient when we left for Reno the following day. 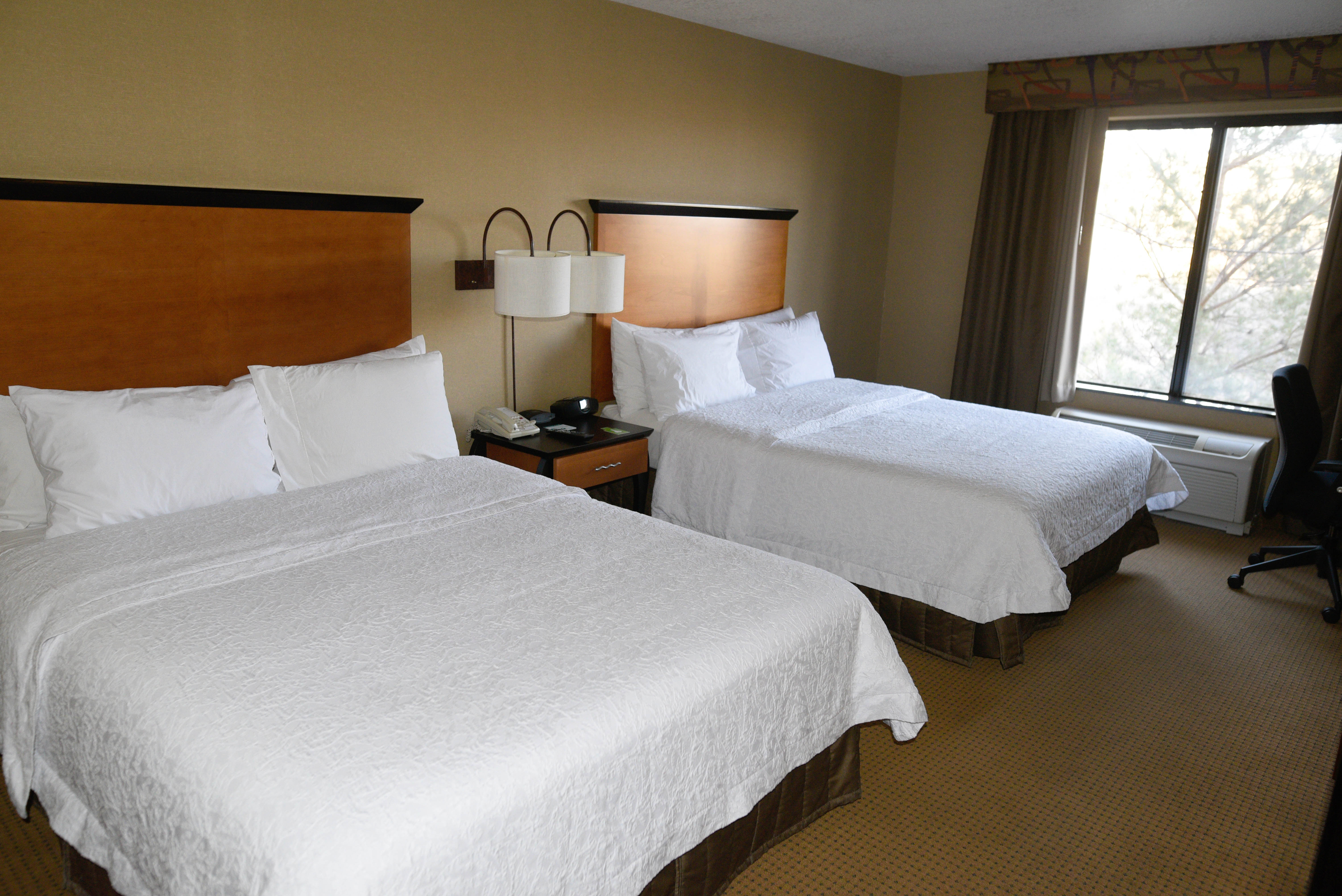 When we left home, it was 82 degrees. But when we landed, it was in the 30s so much colder than home! We aren’t used to the cold weather and Milana even commented that she doesn’t know how people survive in such harsh weather! True SoCal girl, that’s for sure.  Needless to say, we limited outdoor time and found some other things to do.  One of those was their local children’s museum.  Unlike other museums that are super spread out, this is basically one huge room so the parents can sit back and relax while the kids play within eye sight.  She quickly made a friend and they played for a few hours. 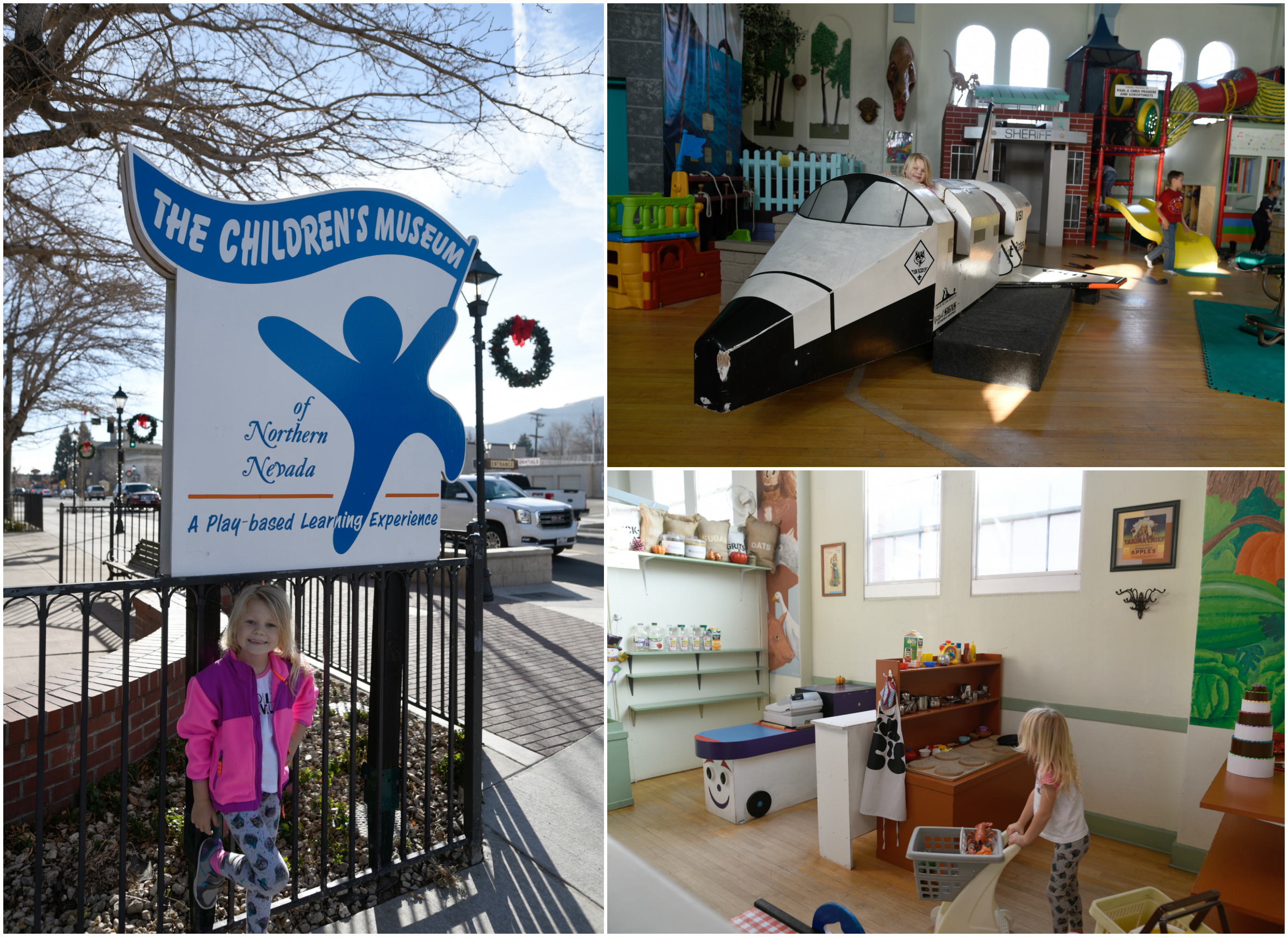 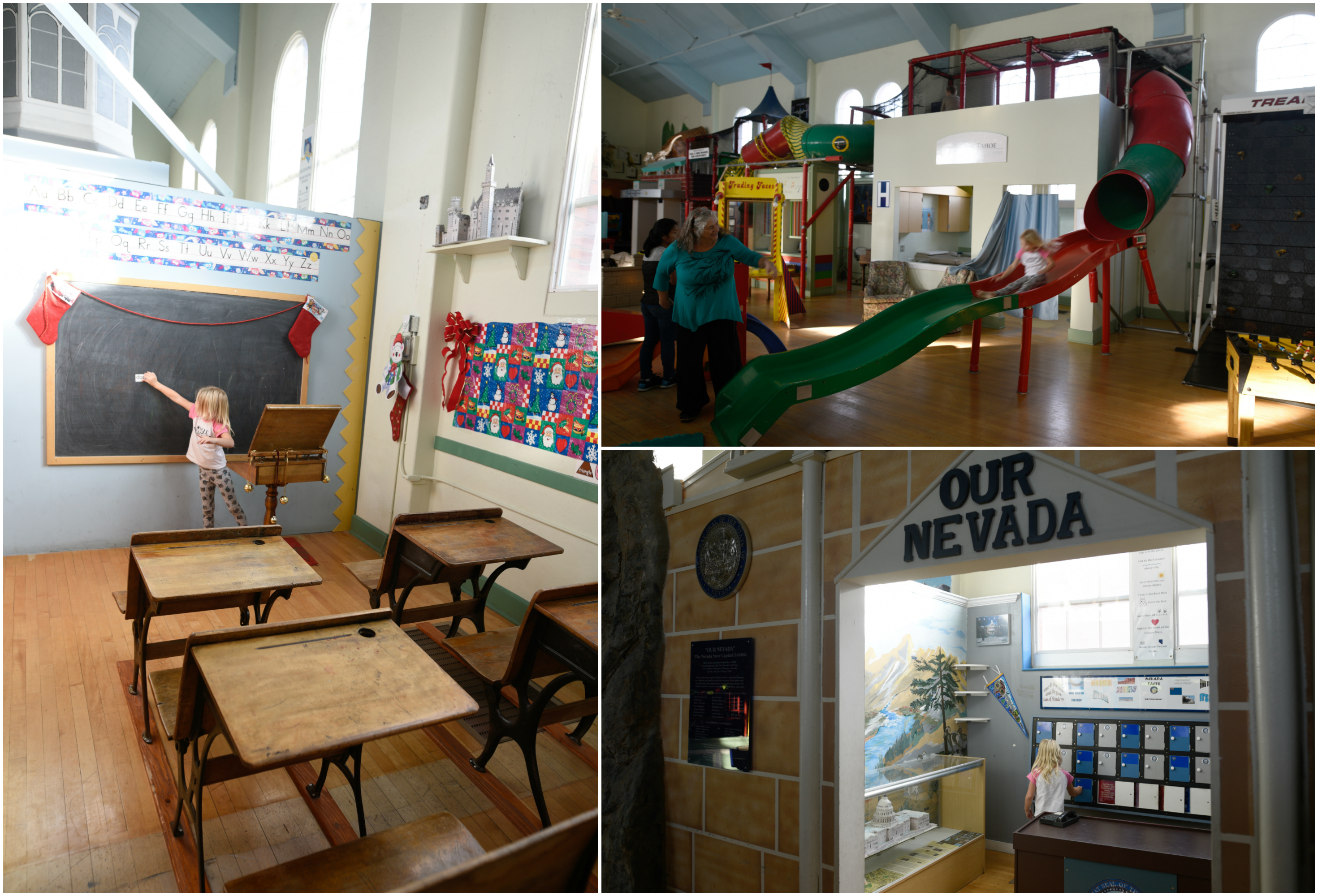 We did visit Fuji park, a local playground, but it was too cold to stay for very long! If you’re there when it’s warmer, there are some great playground options. 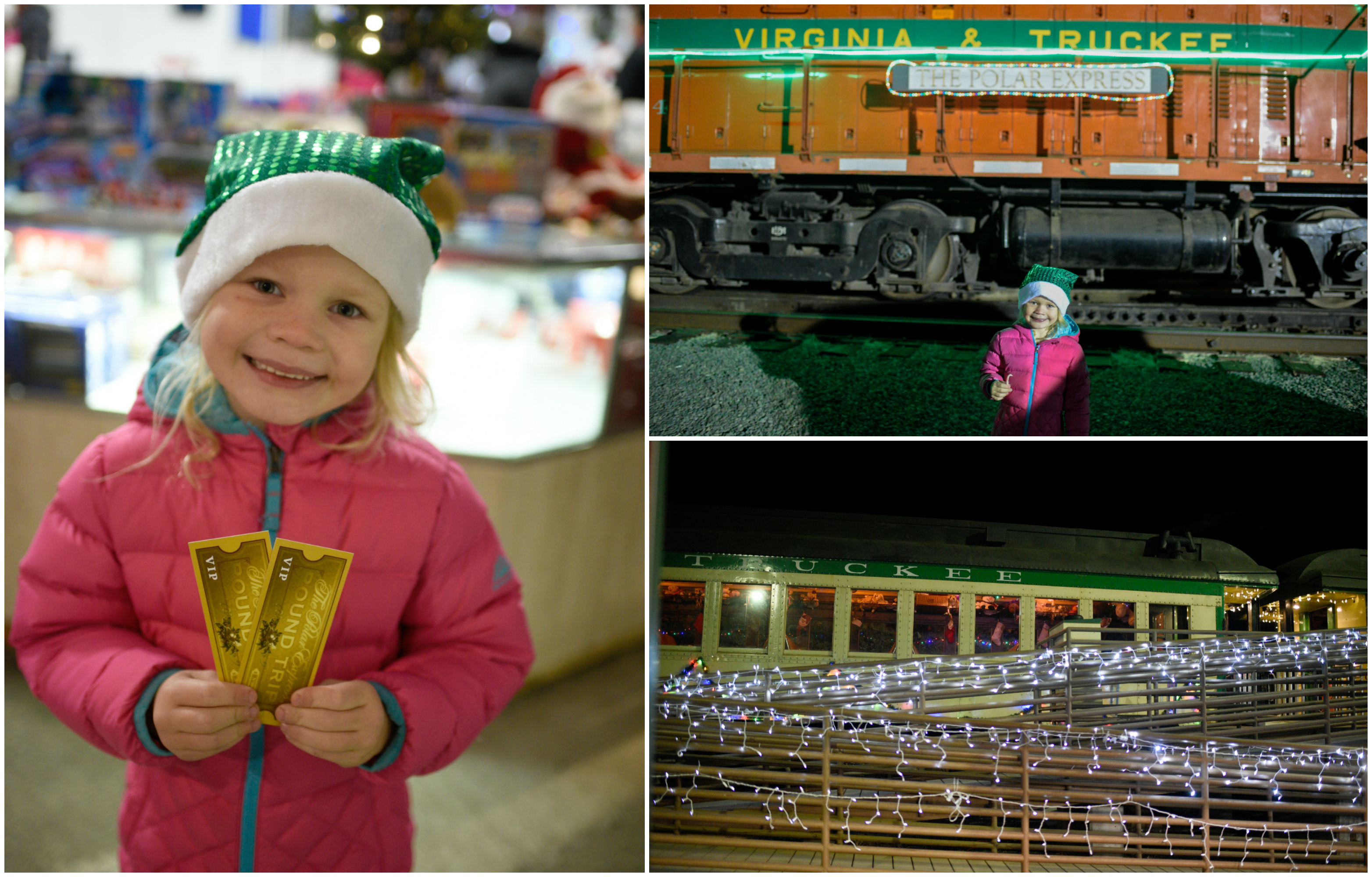 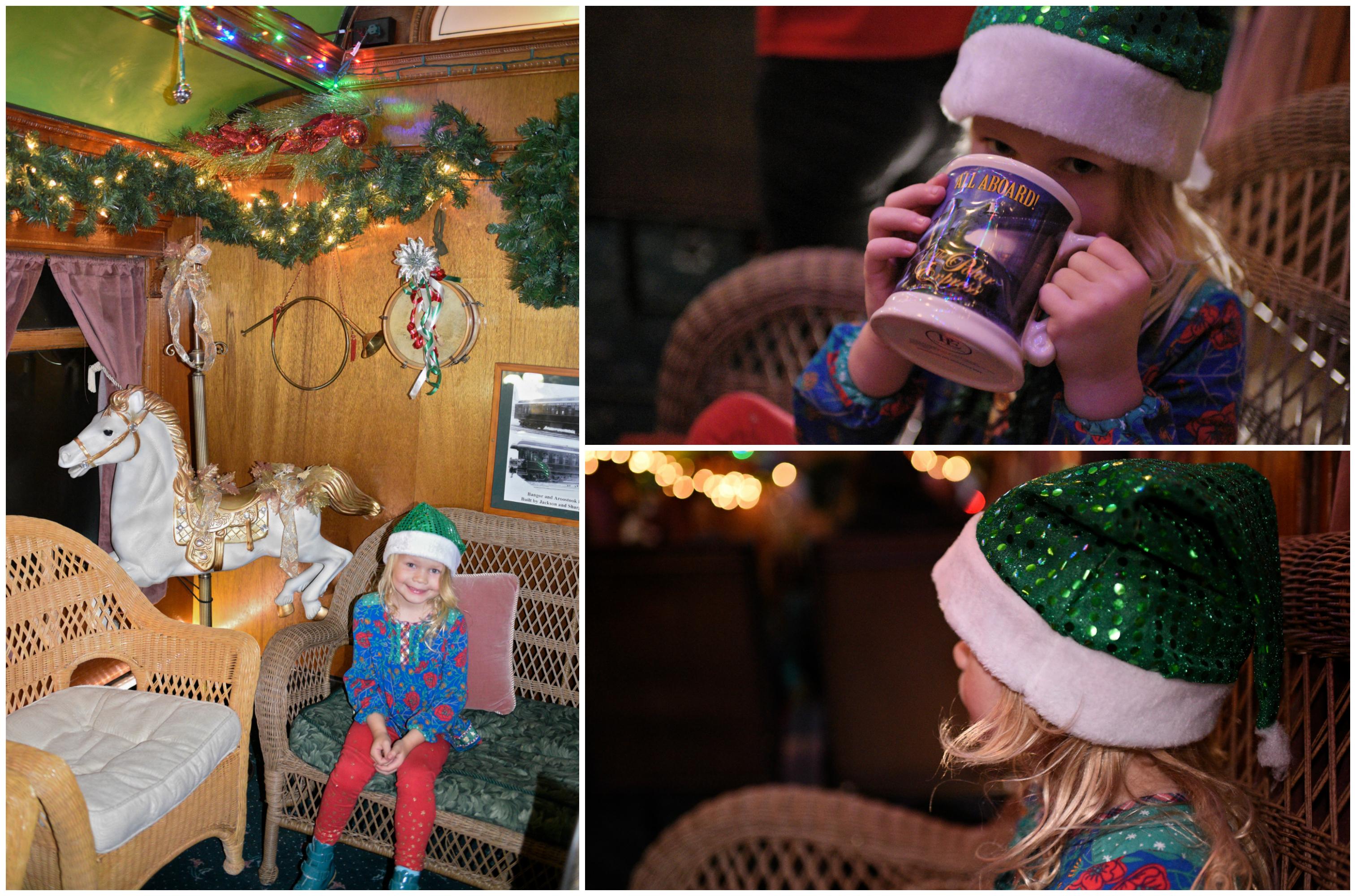 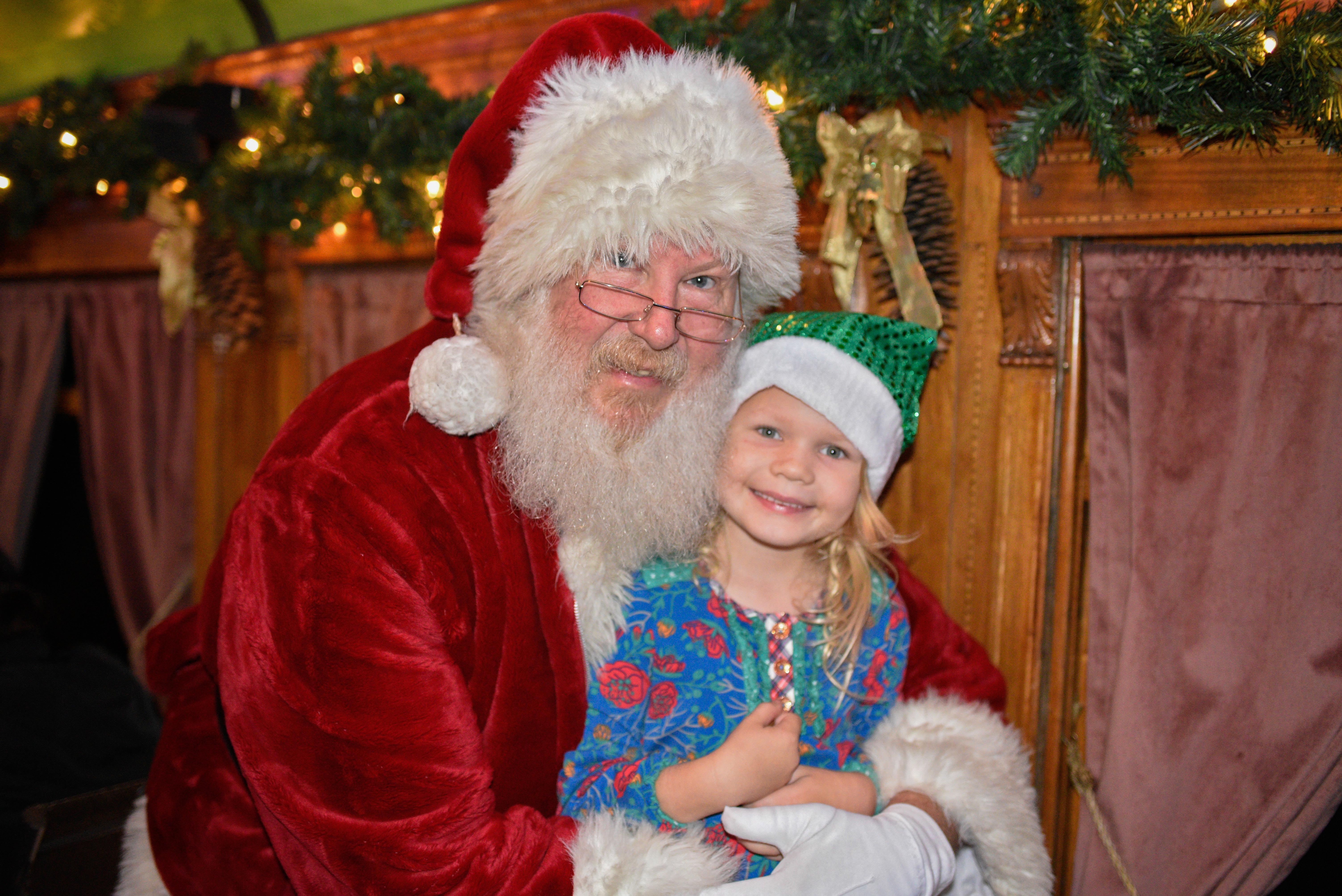 Here’s a video from the train ride:

Now I wouldn’t come to Carson City for the food, the options were slim and not very good.  Across the street from the Marriott was Olive Garden, and since Milana asked for pasta, I took her there.  She has never been before and ended up loving the breadsticks more than the food!  Not the best option, but honestly better than some of their local spots.

Another place we tried was Flat Earth Pizza, which claimed to have NY style pizza. Now I doubt that they’ve ever actually had NY style pizza because it was pretty awful. Undercooked, soggy and just flavorless.  I’d skip this one! 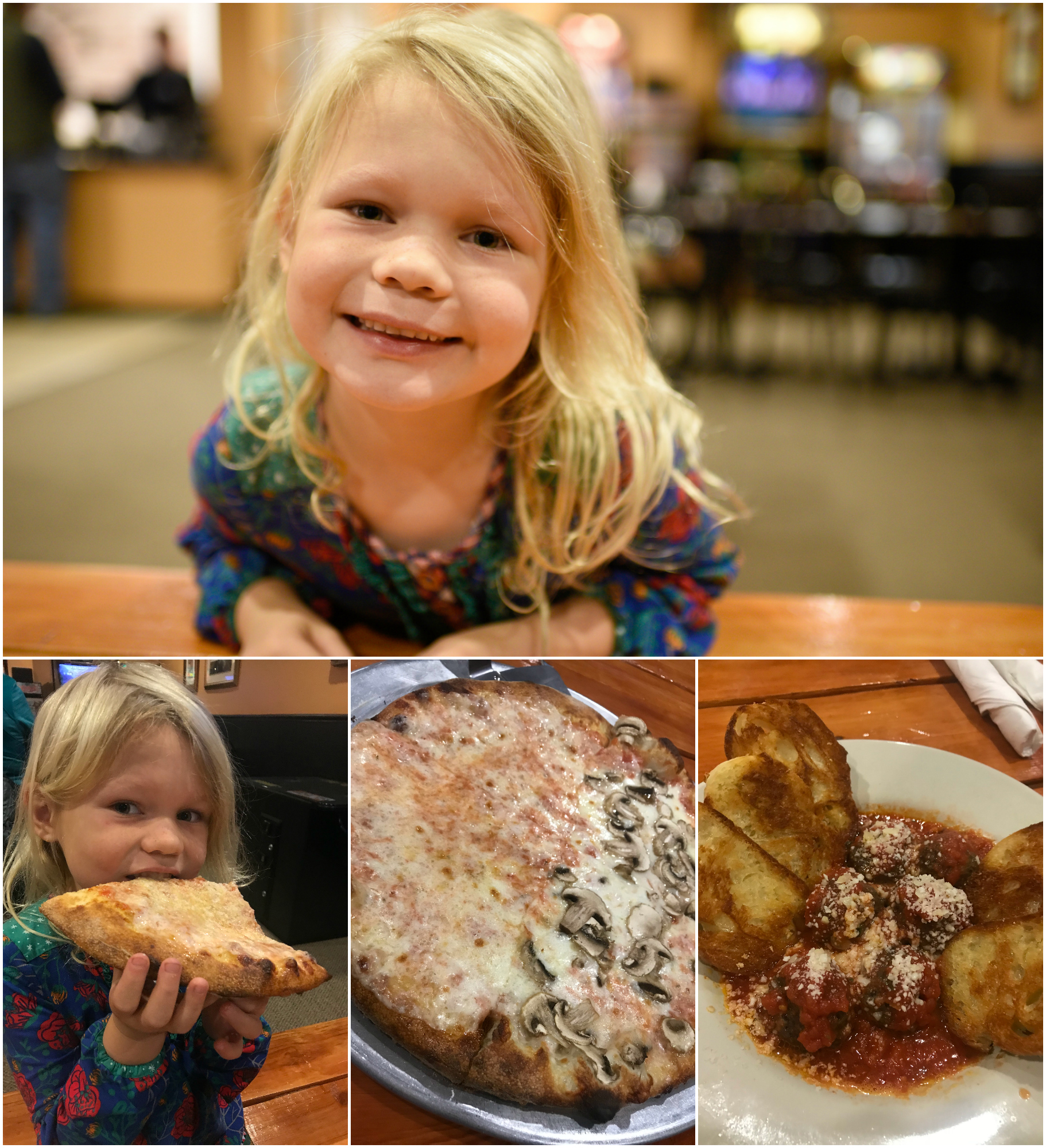 I told Milana the story of Virginia City and the mines and she was very interested to see it.  We made it a day trip while in Carson City and it was awesome! The city itself is super cute and still maintains the old-fashioned atmosphere. 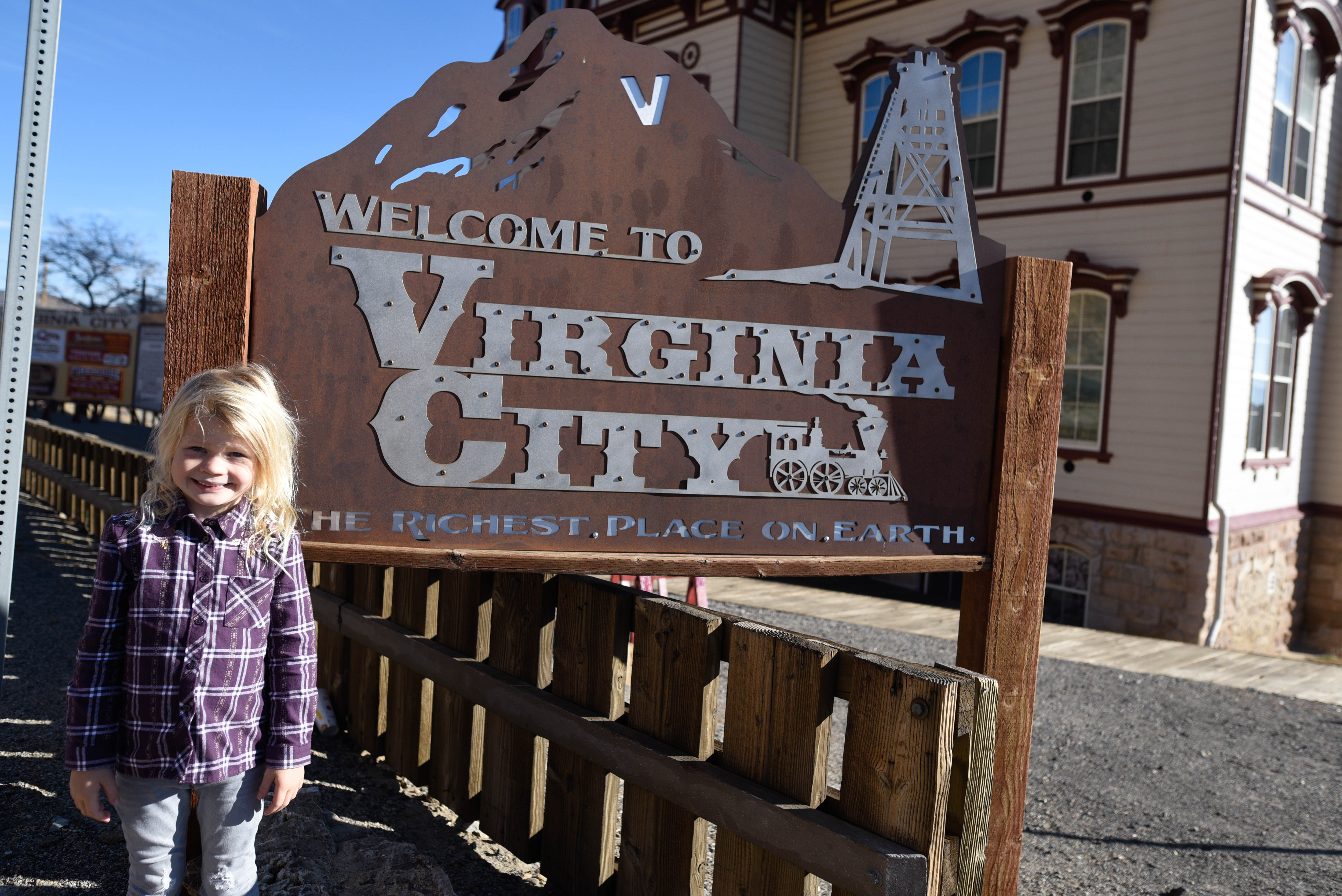 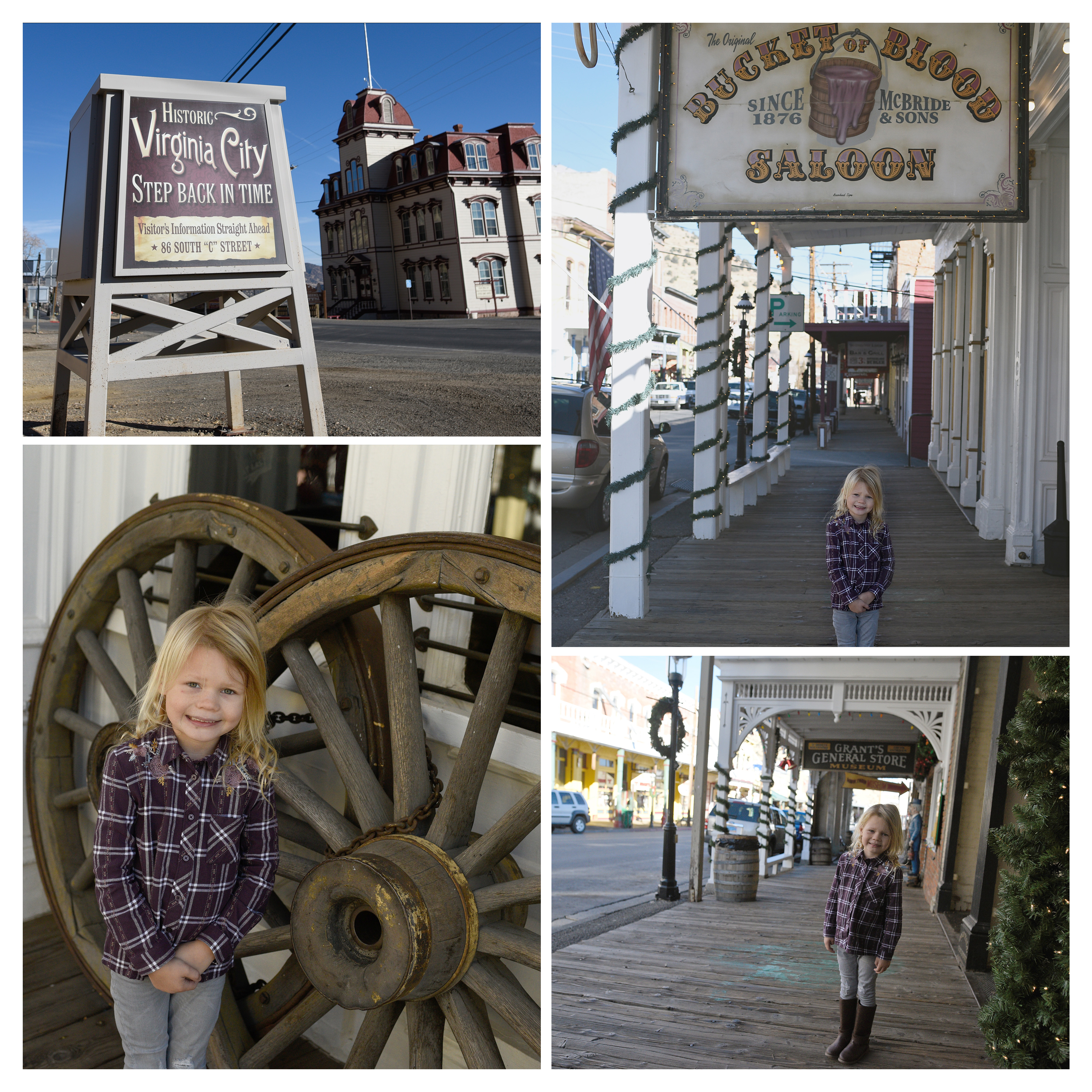 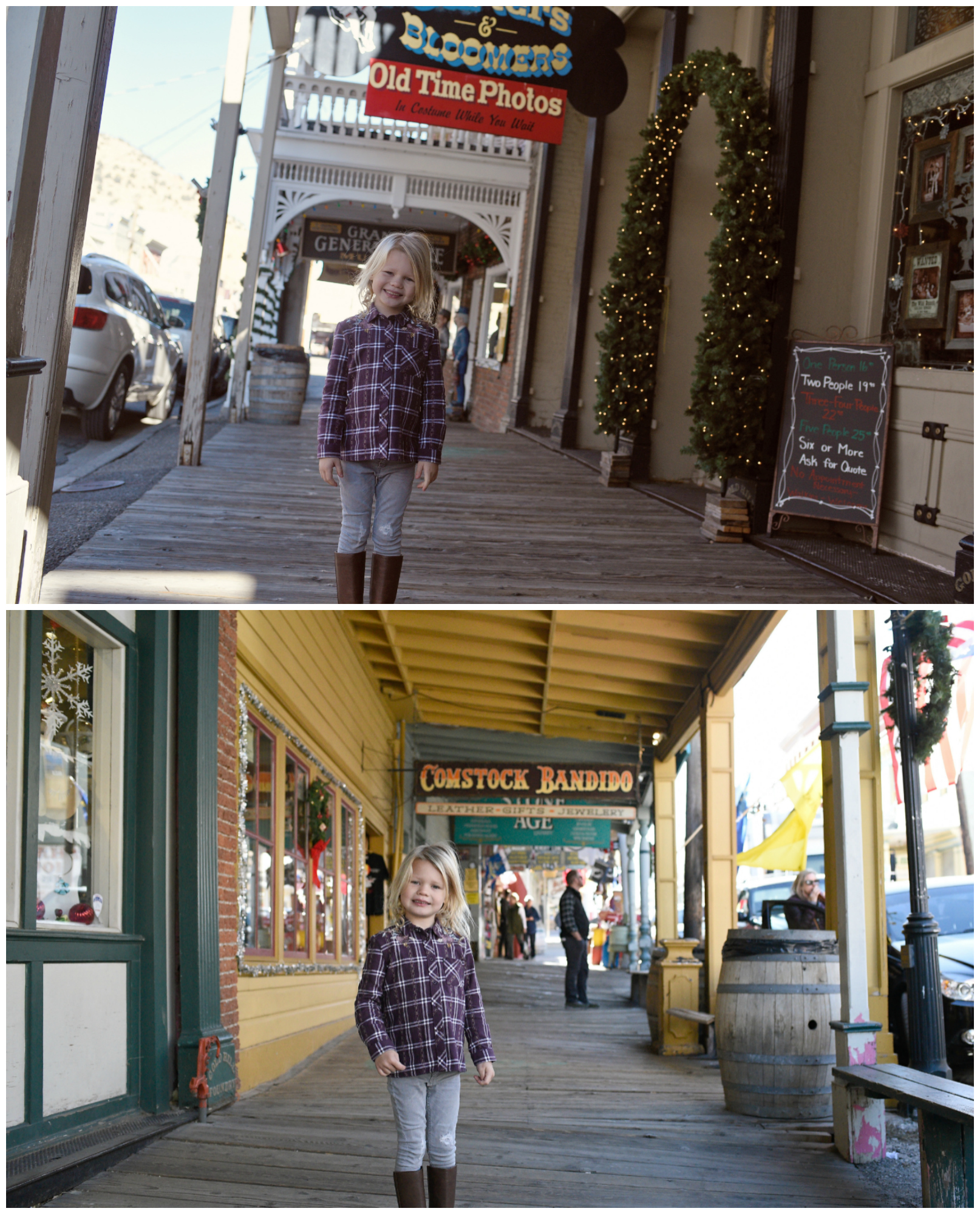 There are lots of shops to explore, and they sure do love their candy stores! There seems to be one on every block. 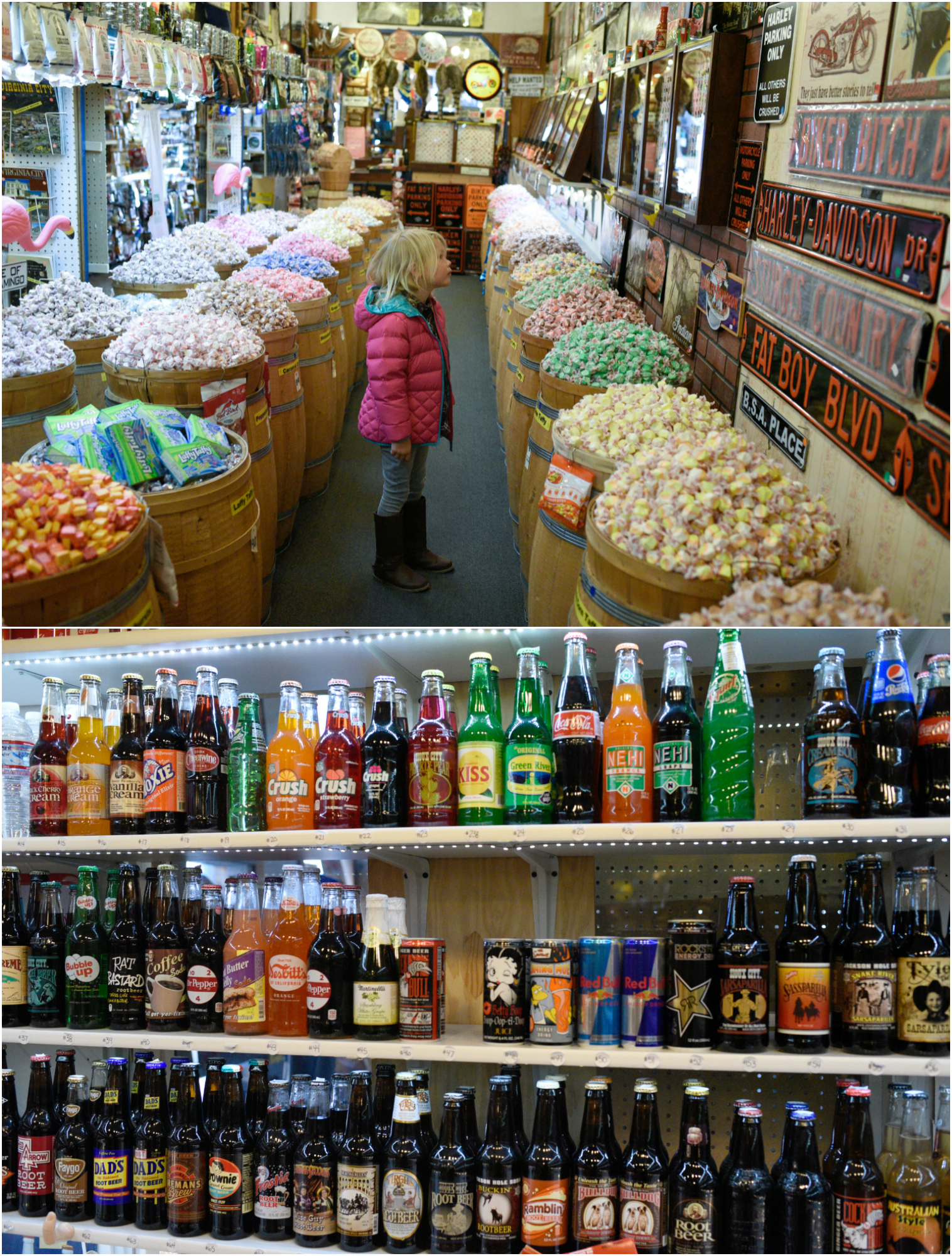 One of the places we visited while there is The Way It Was Museum.  I highly recommend it, they had all sort of things from back in the day and Milana got to see so many things from many years ago, including a dentist’s chair and drill, various medications and an old-fashioned sewing machine. 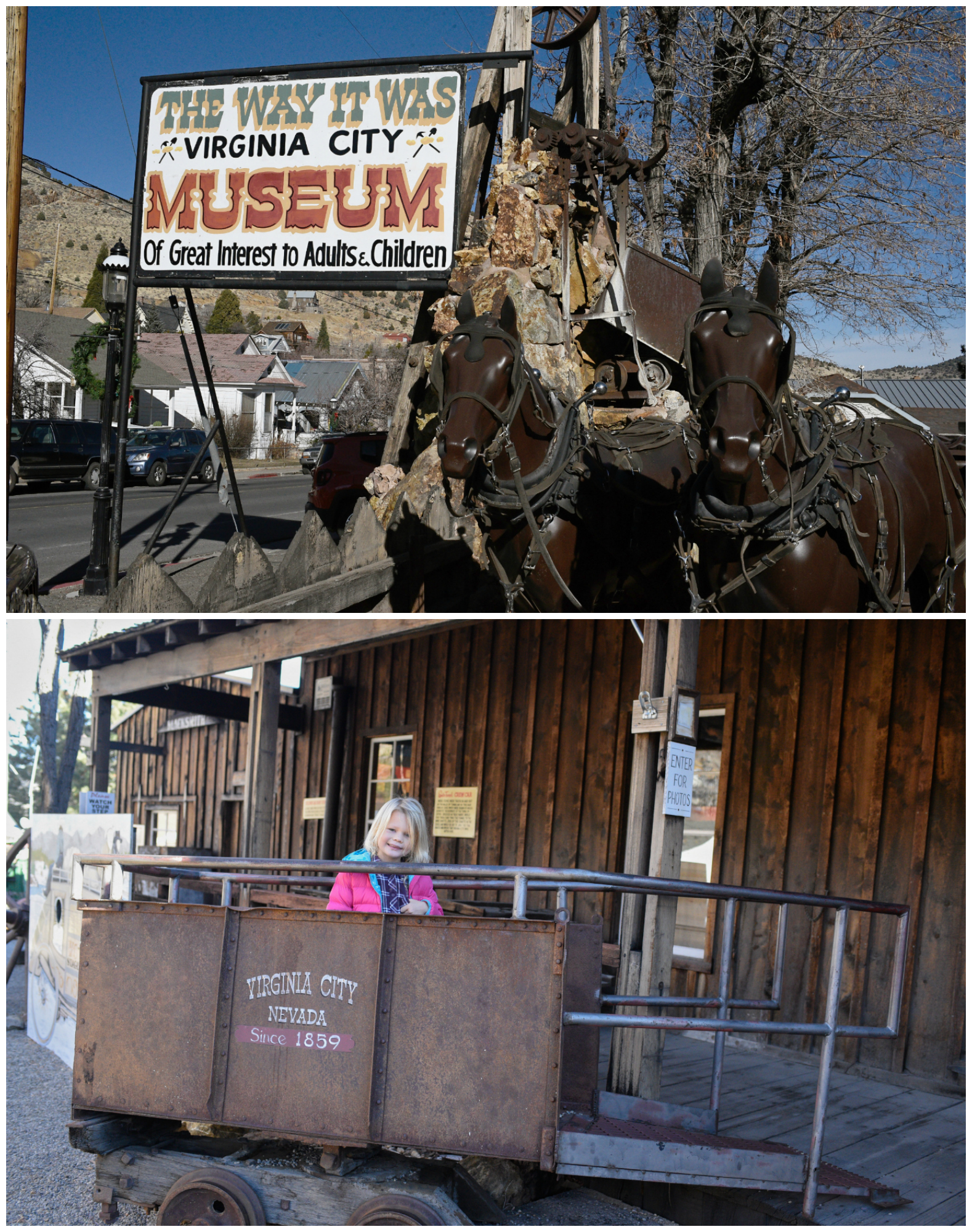 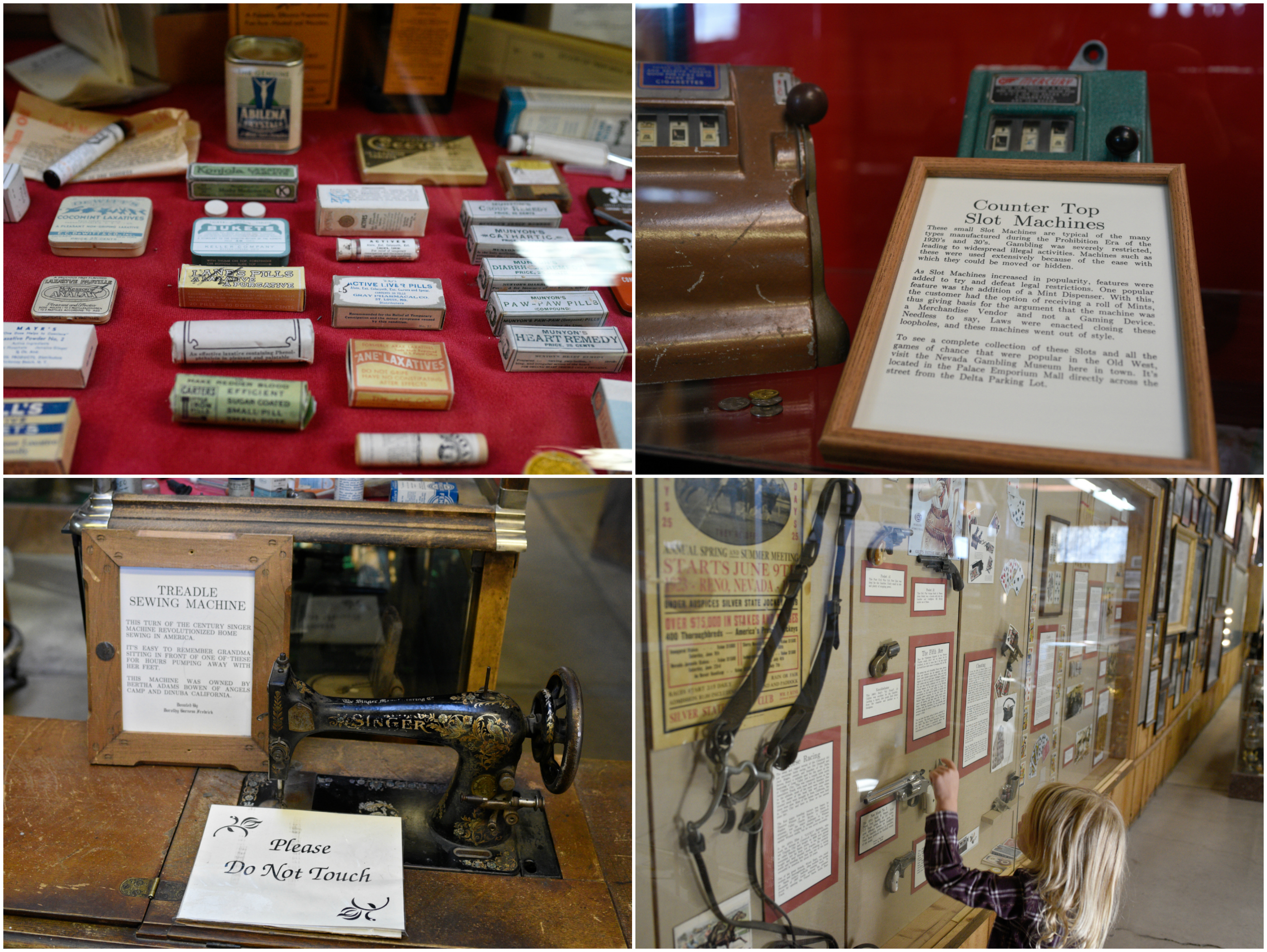 You never know what you will see while walking down the street in Virginia City.  This guy had his donkey with him and offered Milana a carrot to feed to it, which of course she happily did!

There are many restaurants to choose from in Virginia City. We chose to have lunch at Palace Restaurant & Saloon and it was surprisingly really good! I had the pastrami reuben, which was one of the best I’ve ever had. 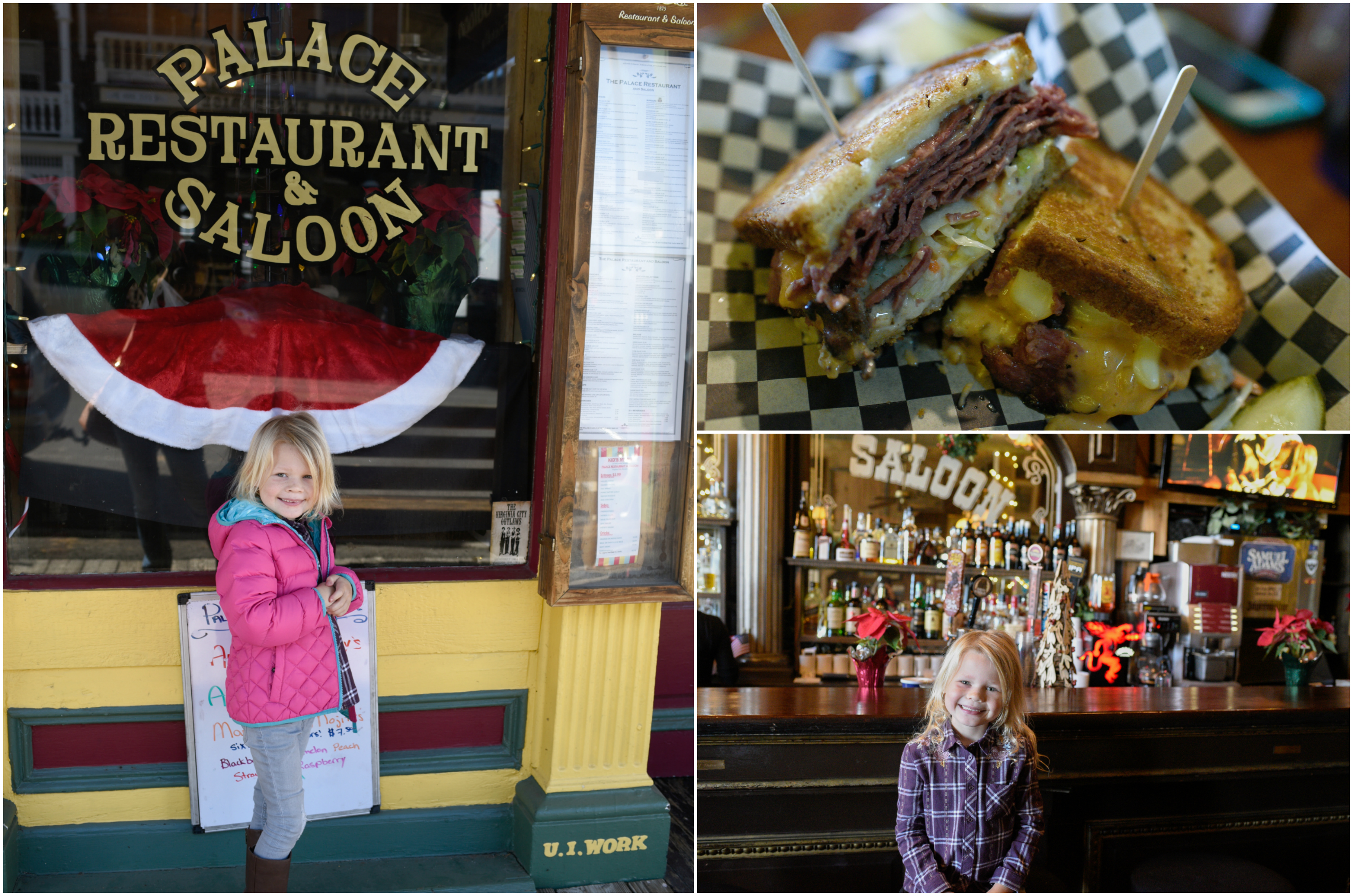 On the way back to Carson City, we stopped at a candy factory where they make chocolate and lots of salt water taffy. 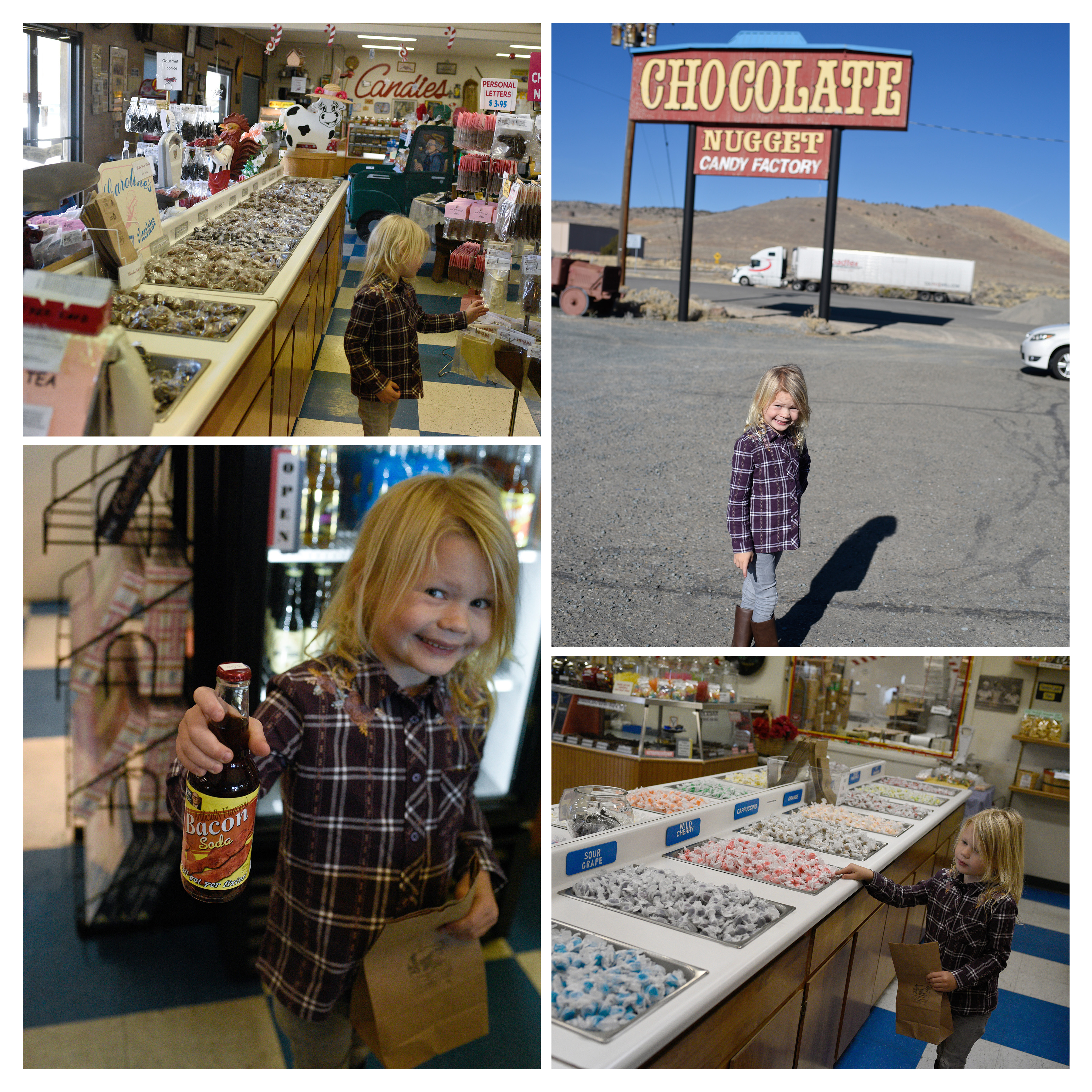 If you are in the Reno/Carson City area, Virginia City is a must see!

The last city we stayed in was Reno.  We stayed at the Courtyard Reno Downtown, which was in a great location.  Surprisingly, the parking was free, not something you often see in the middle of downtown!  We booked the cheapest room and again were upgraded to a suite with a separate sitting area. 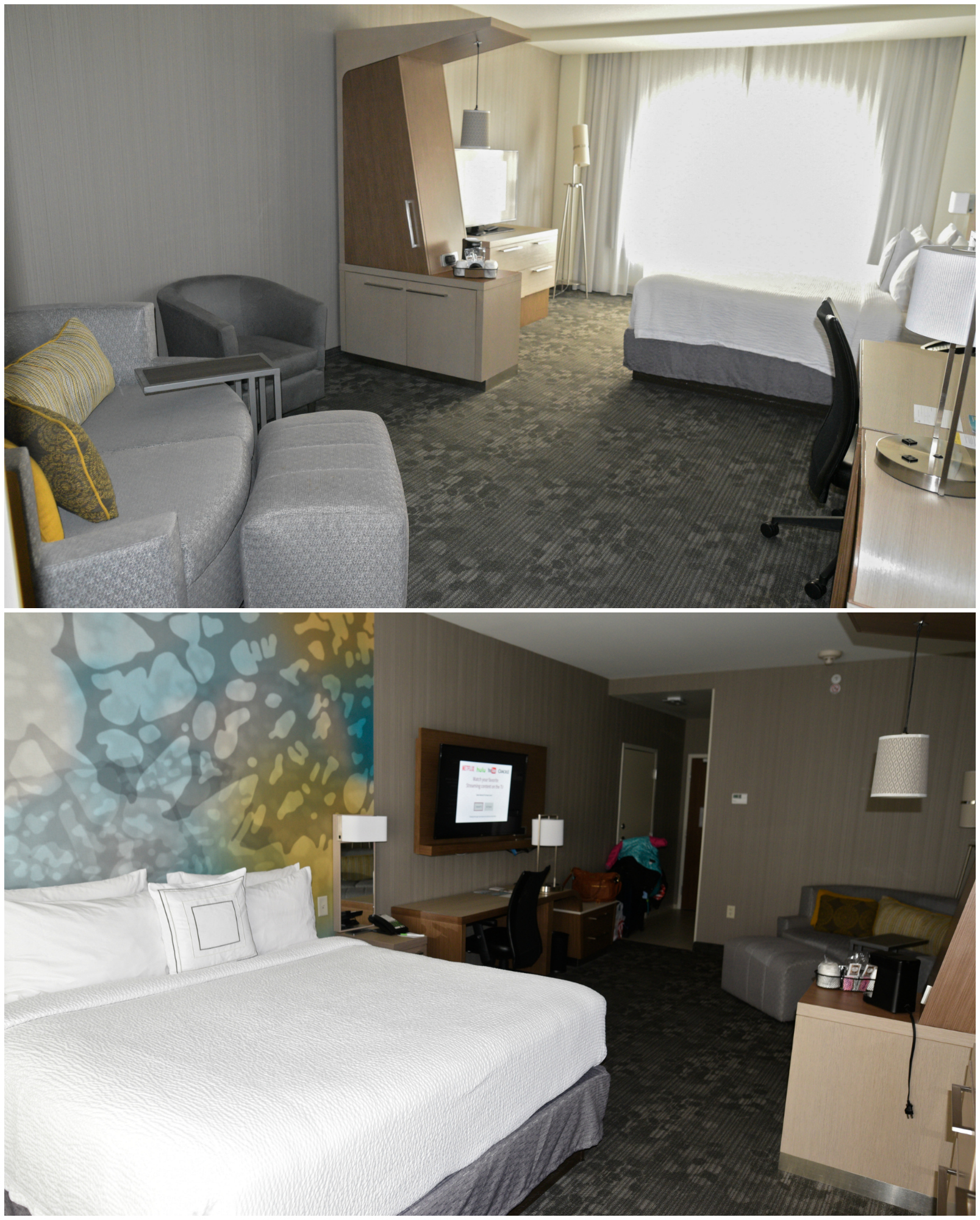 Reno is known for gambling but there is lots to do besides the casinos!

While looking for museums where we can use our ASTC membership, I found two in Reno so off we went! The first was the Nevada Discovery Museum, which was very similar to many other children’s museums we have been to.  They had lots of engaging exhibits, an art area, building area and many things in between.  Perfect way to spend a few hours! 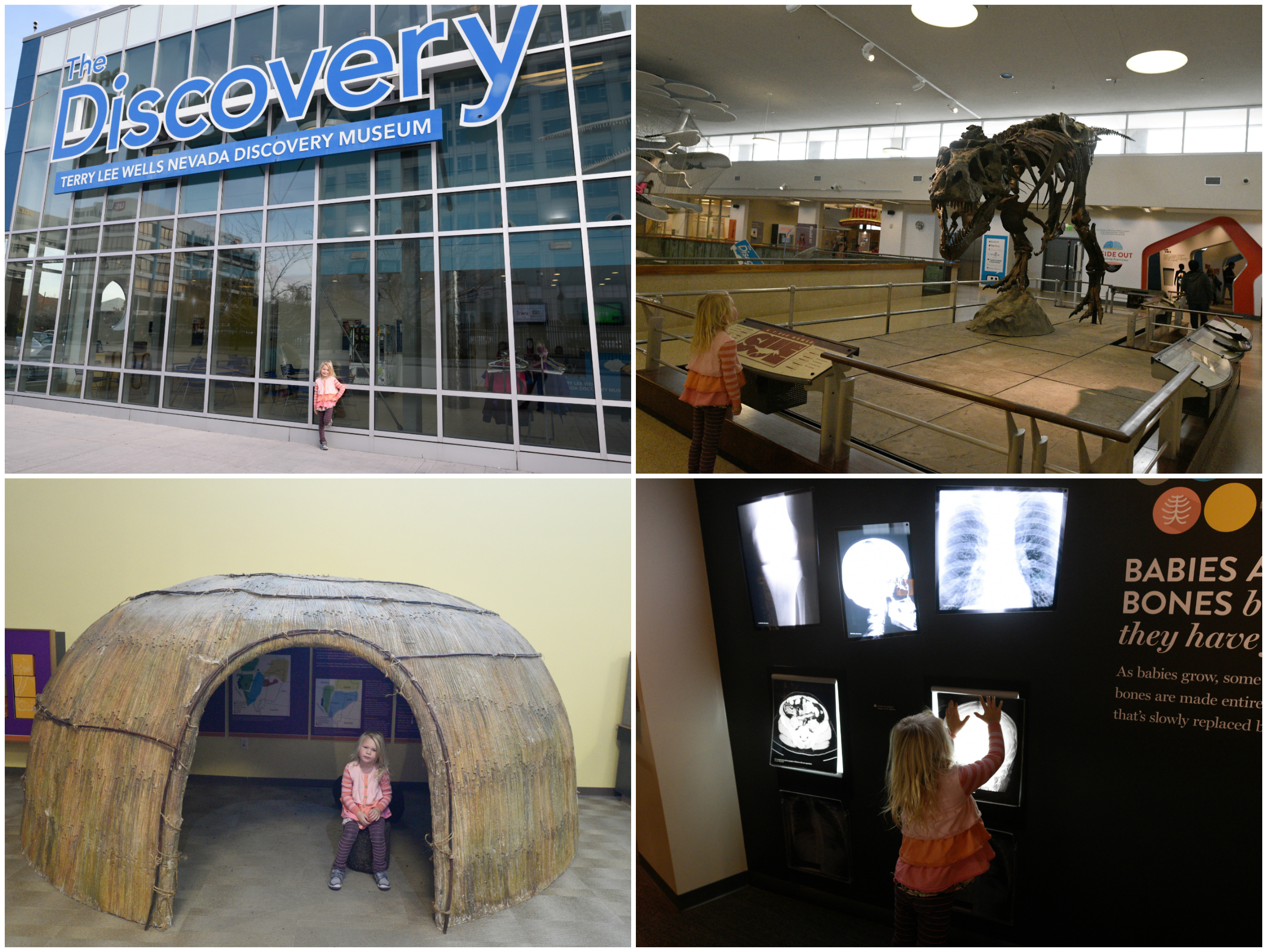 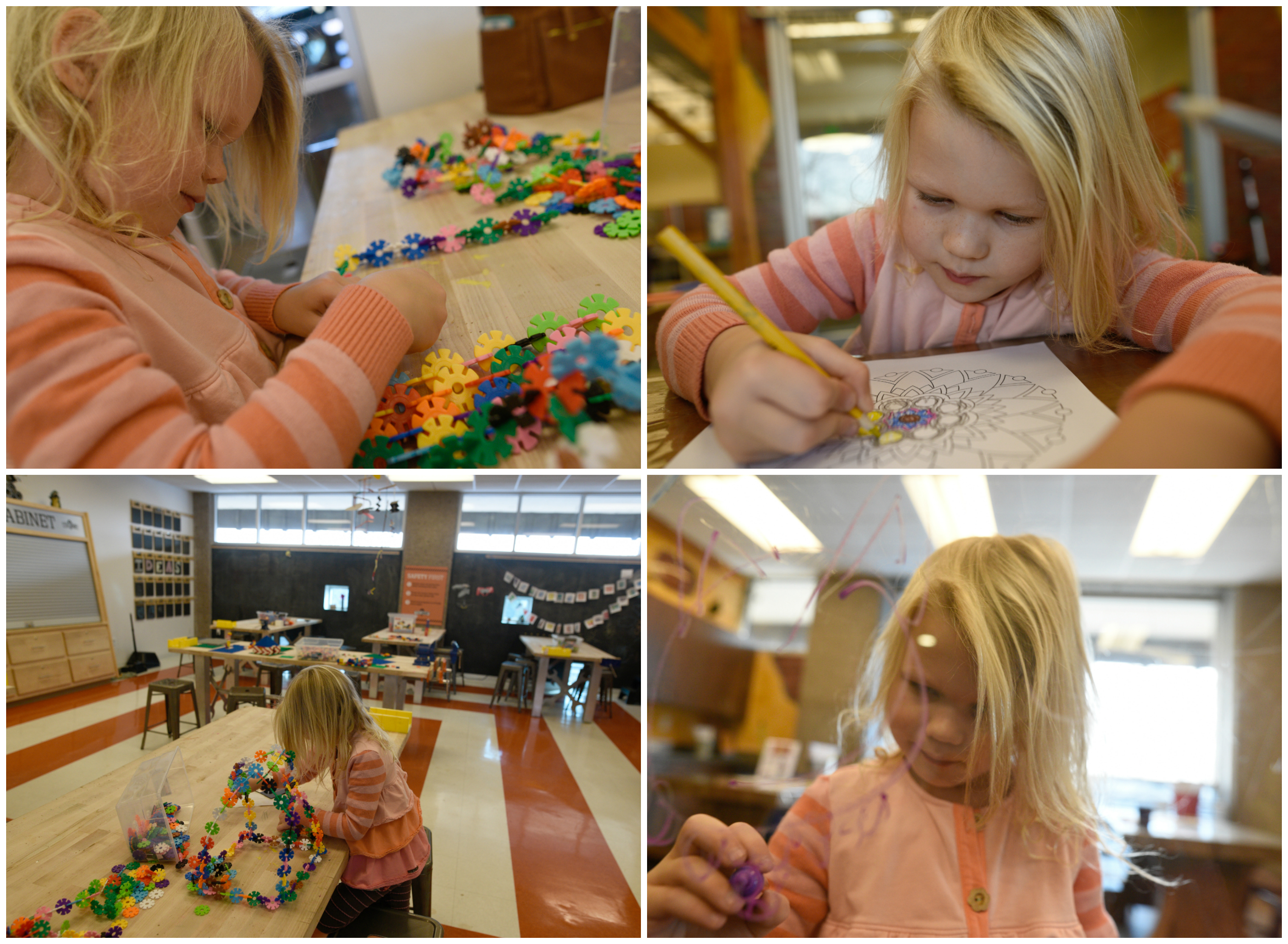 The second place we went to (also part of ASTC so free) was the Fleischmann Planetarium.  This is a really small facility so don’t plan on spending too much time here. We walked around a bit and Milana picked out a Charles Darwin doll as a souvenir and we left.  If we had to pay for this, I probably wouldn’t do it. 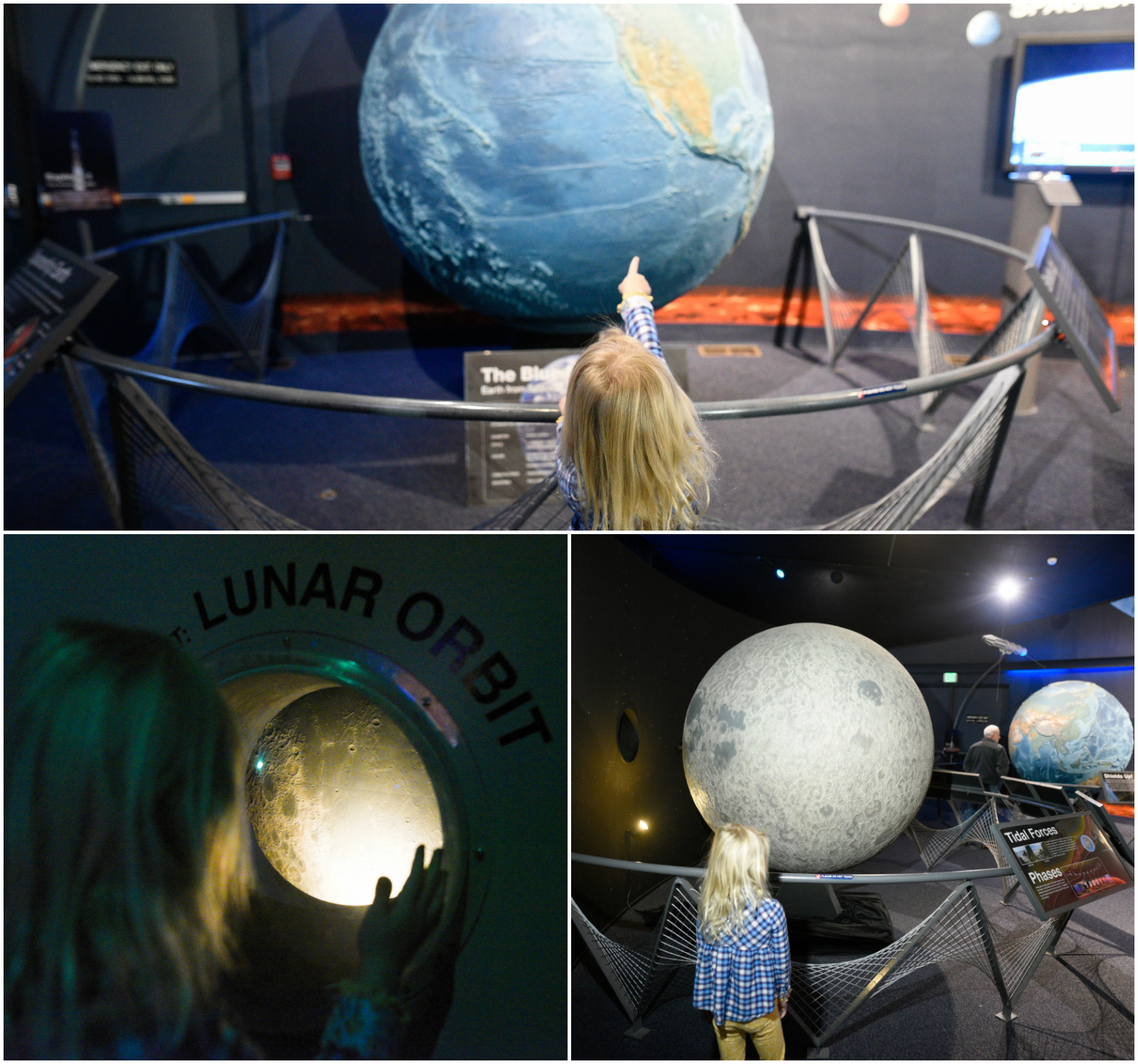 Across from the Marriott, was the Greater Nevada Field, a baseball stadium.  During the holidays, they set up an ice skating rink and have other Christmas activities.  We walked over to check out the ice rink and did a train ride around the stadium to see the holiday lights. 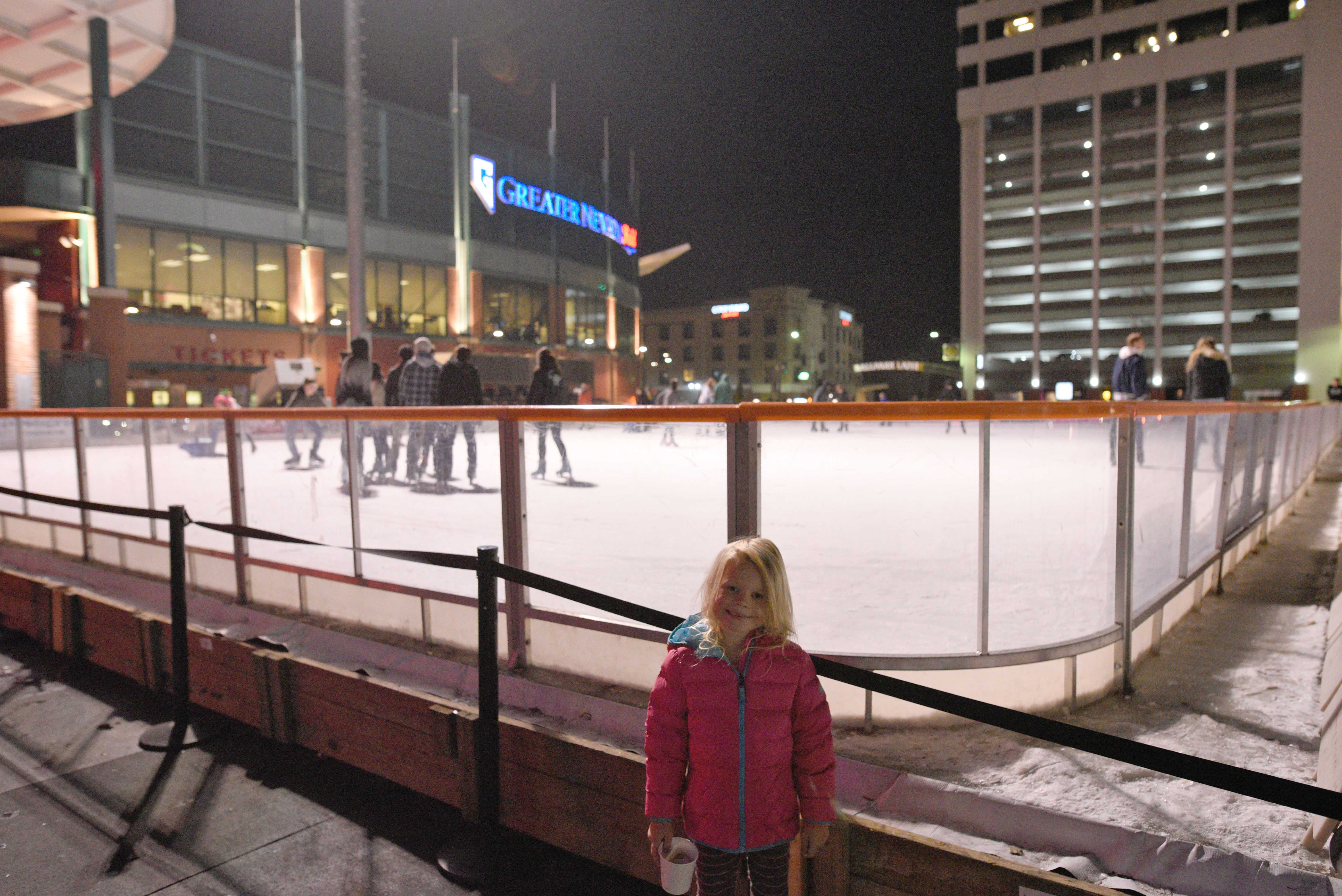 Reno had much better options than Carson City!  When we were in Portland in September, we stumbled upon a healthy fast food type of place called Laughing Planet. It’s a chain and I was so happy to see it in Reno! They have dinosaurs on each table for kids to play with and the food is healthy, with many organic options.  Milana chose the kids meal where she got to select her items and she chose rice, beans, corn and chicken.  I had a wrap with kale and lots of other veggies/tempeh and brussel sprouts.  This is one of our favorite chain restaurants! 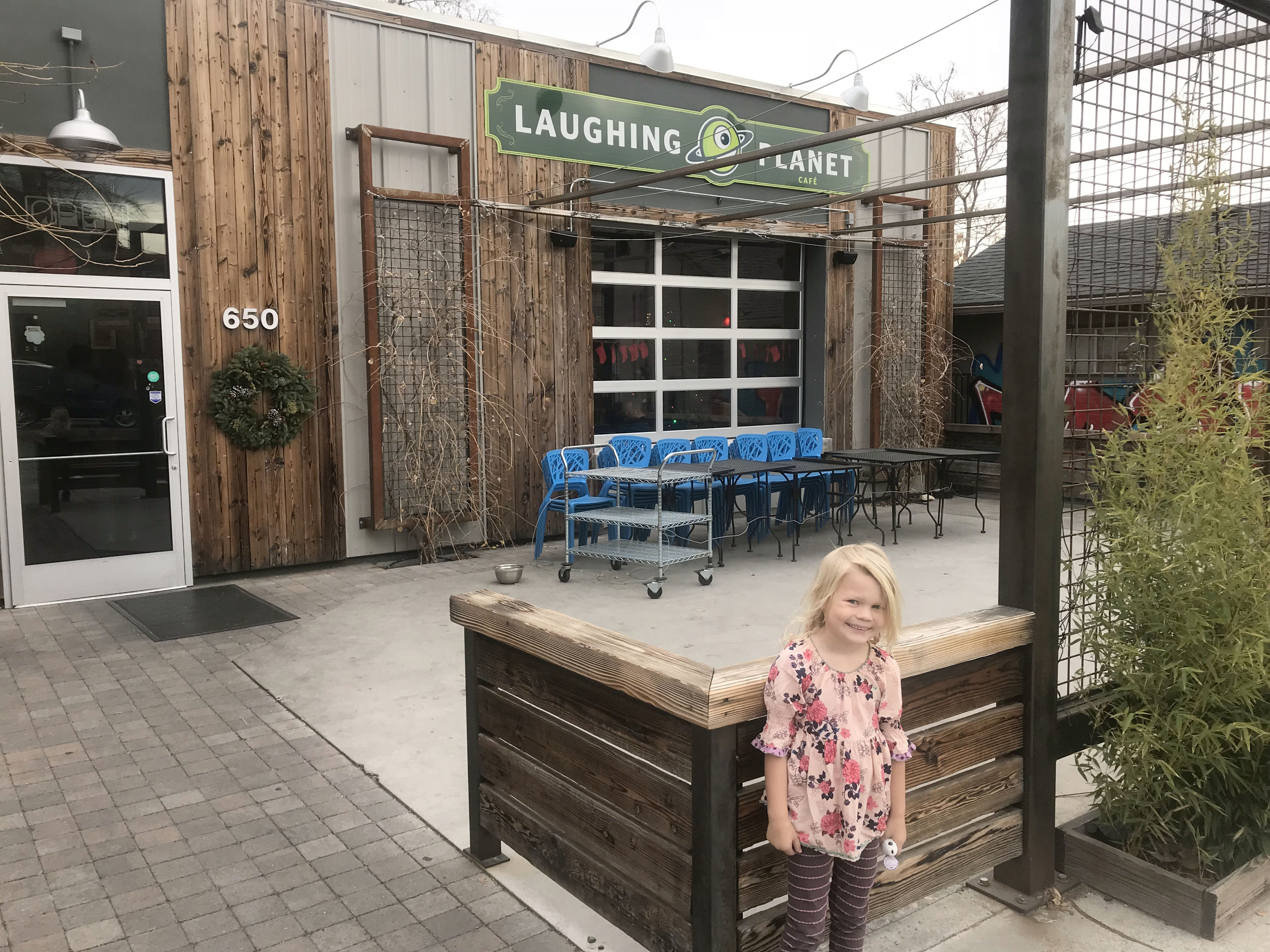 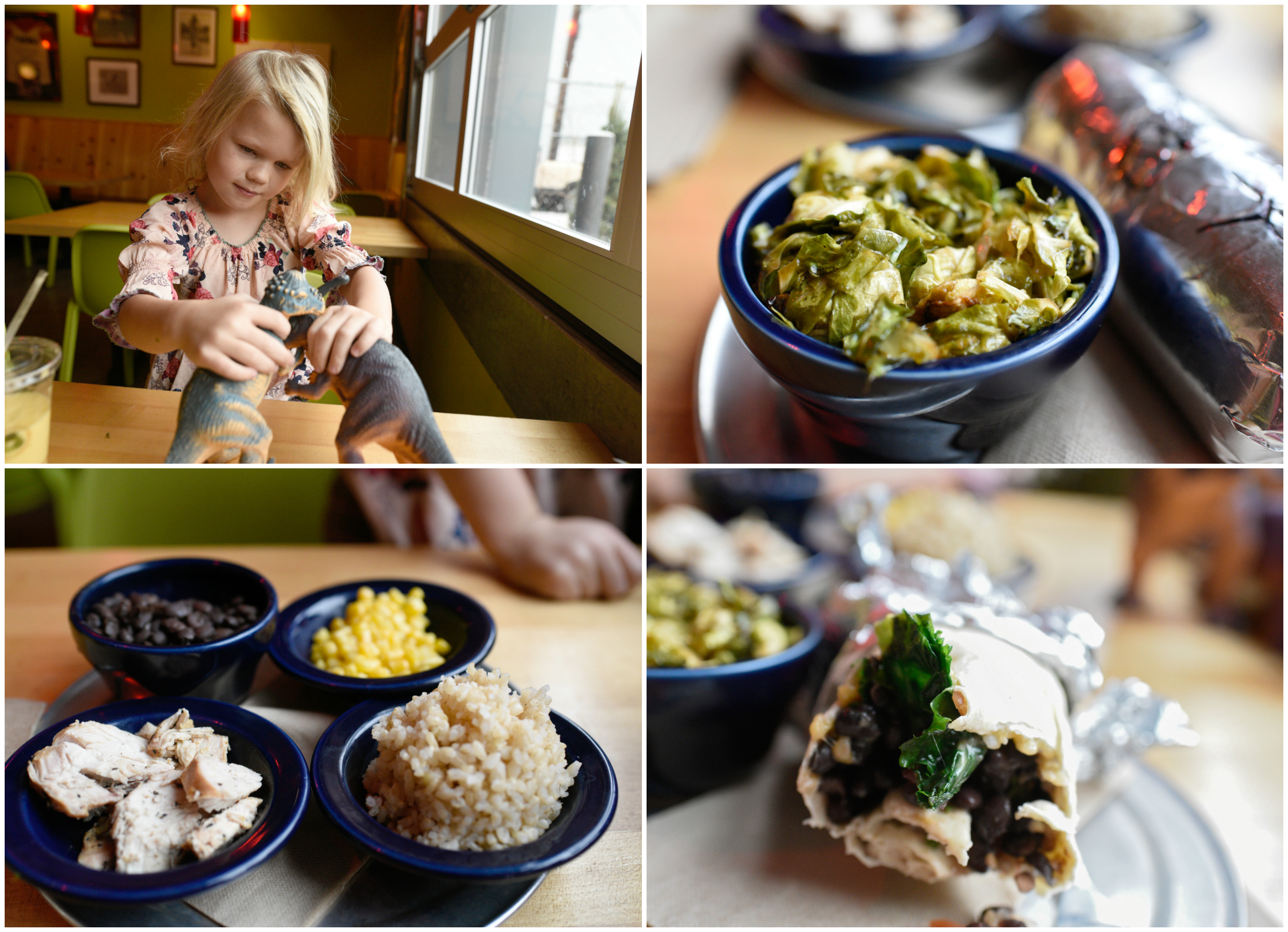 For breakfast the next morning, we went to a place called Squeeze In.  It had lots of great reviews and looked like the kind of place we like and it was awesome! Quirky decor and the kids get a bucket of toys to play with while waiting for food.  The food was really good to, Milana had the kids pancake and I had really good cream cheese stuffed French toast. 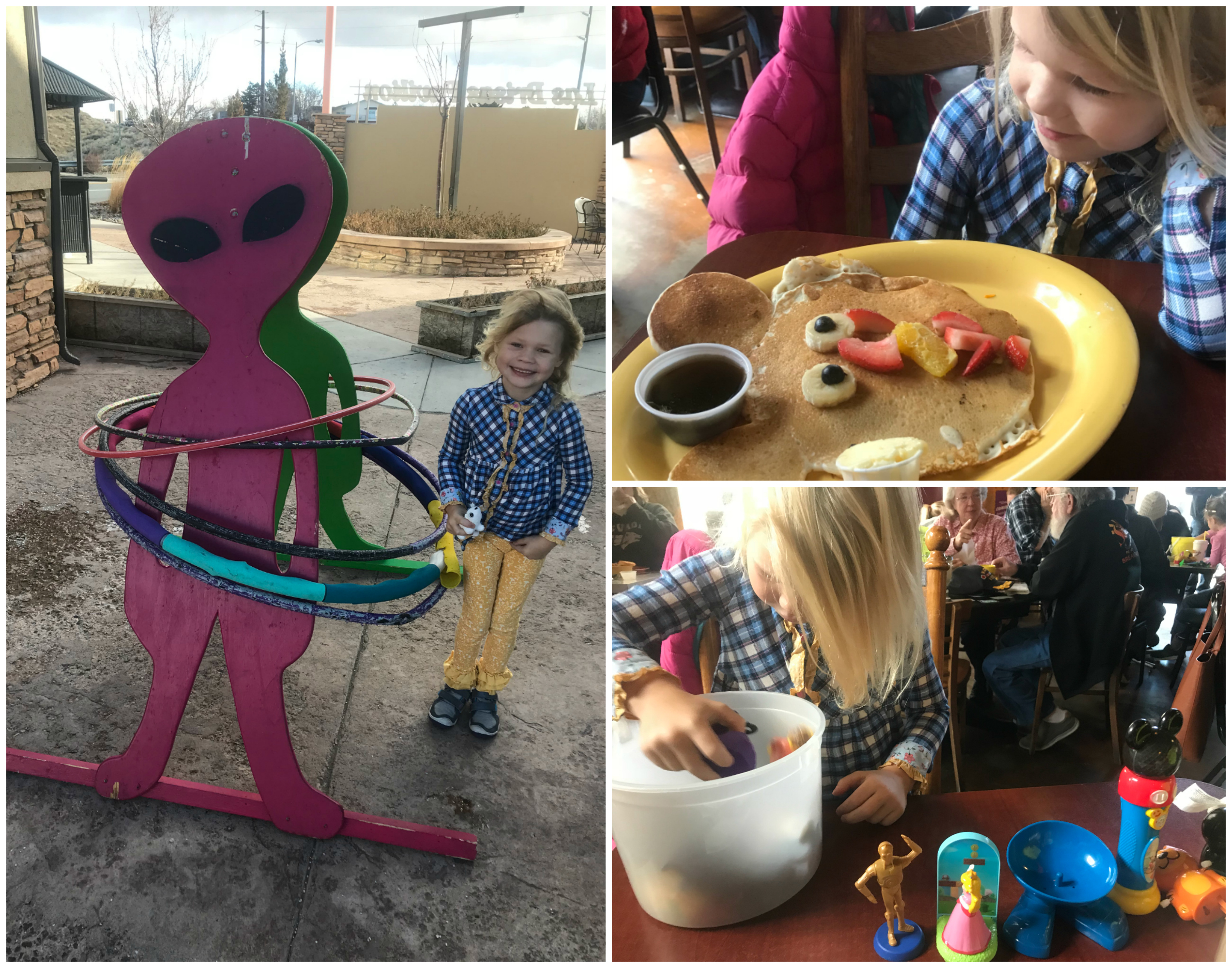 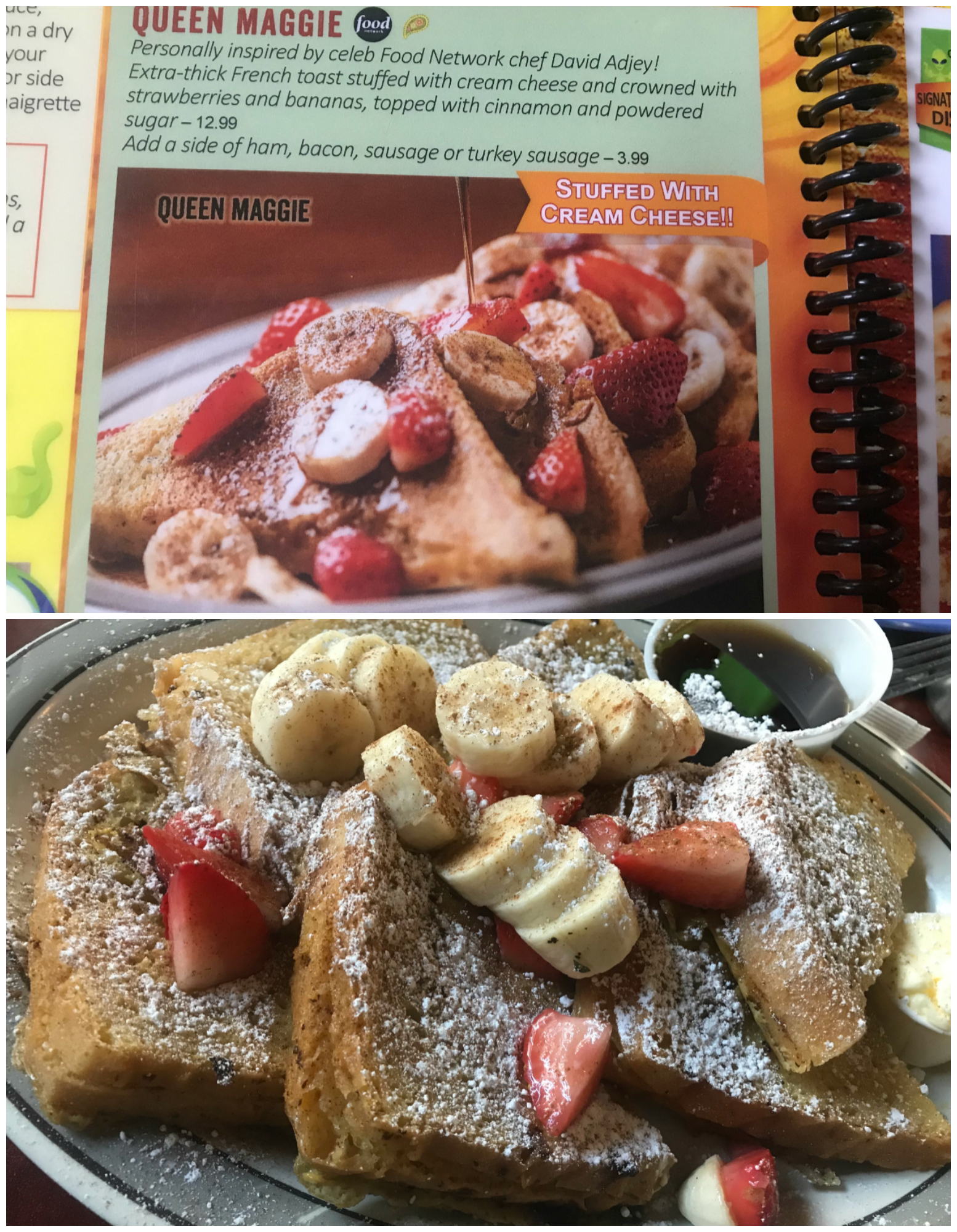 As you can see, there is quite a bit to fill up your time in Northern Nevada.  We stayed for 3 nights and it was the perfect amount of time to explore the area.  Though next year, Milana already said she wants the Polar Express tradition to continue in a much warmer place and I agree! 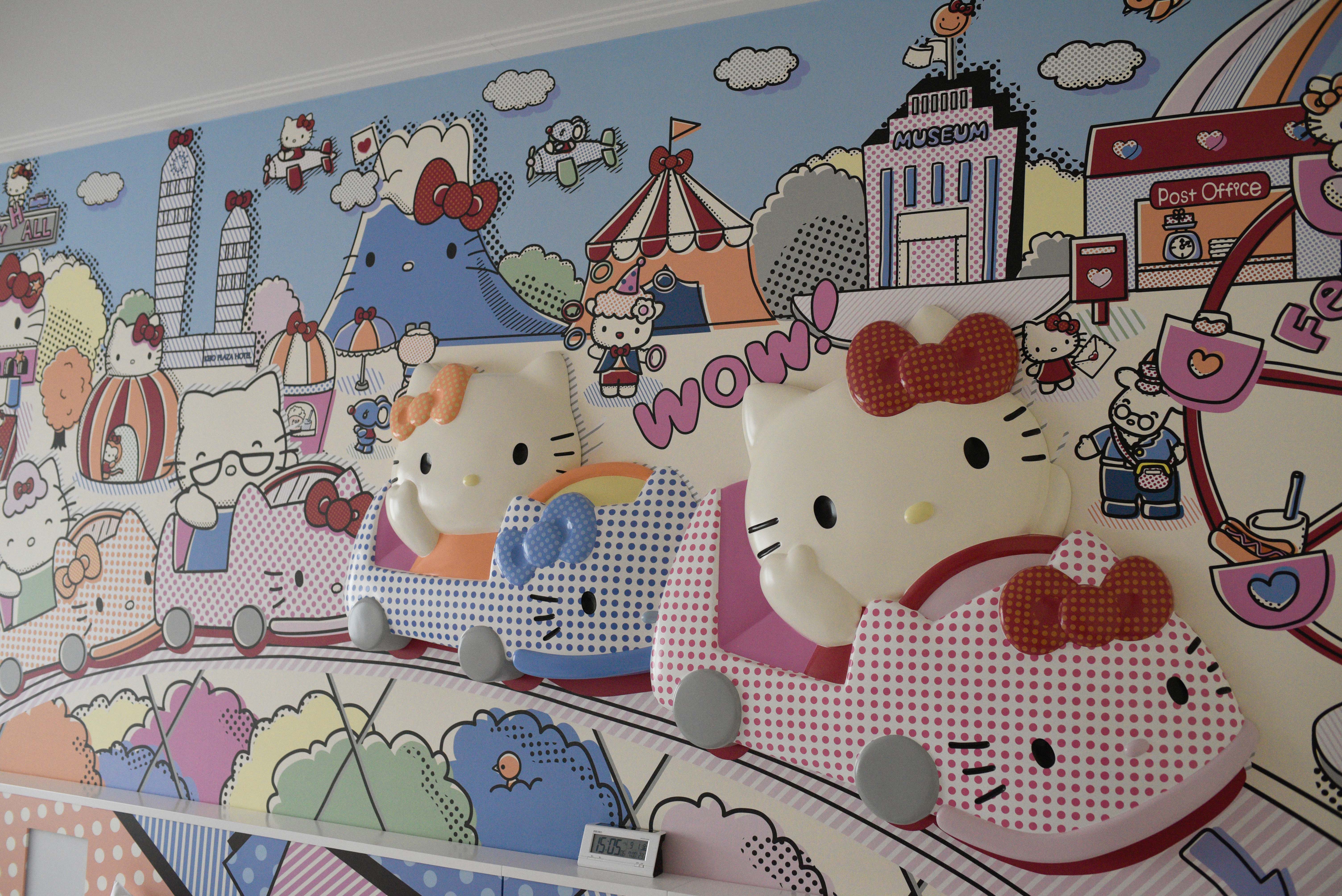 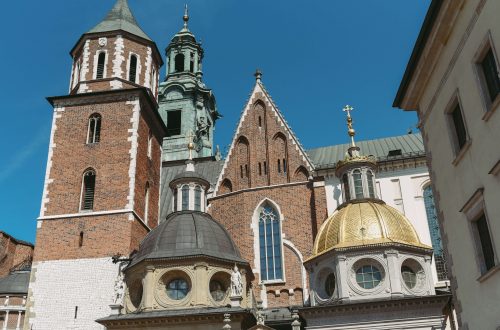