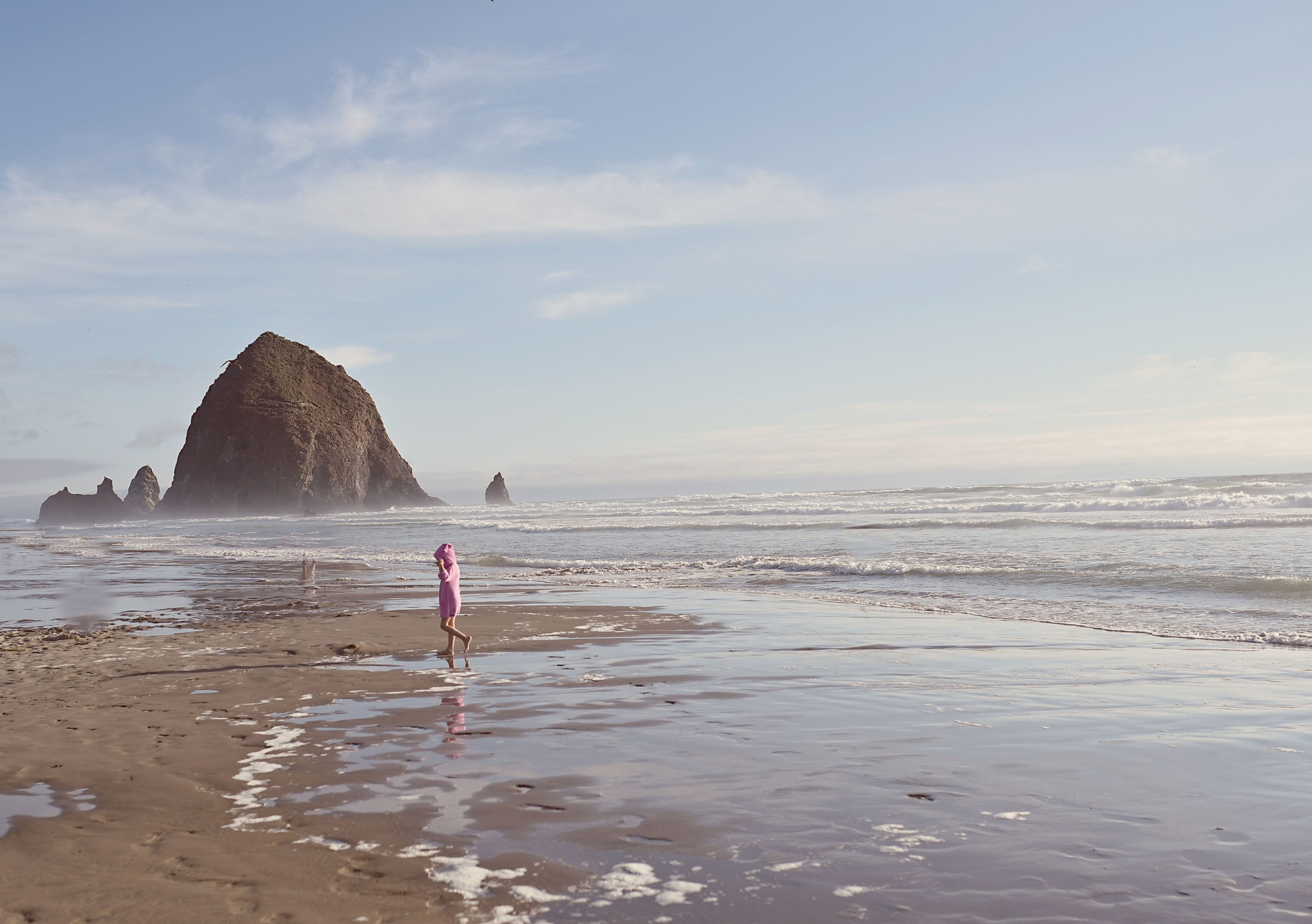 In early August, Milana and I took a trip to coastal Oregon. We flew Southwest from LGB to PDX (points and companion pass) making our flight just $11.20 (taxes). This was a mom/daughter trip and we had a blast exploring the Oregon coastline! We had 2 days to explore  before heading to our farmhouse Airbnb and we wasted no time!

Normally I use the Mifold car seat for her when we travel since she is nearly 7 however that’s when we either don’t rent a car and use Ubers or rent a car for super short distances where she won’t be uncomfortable or fall asleep.  Since we were driving a lot (2 hours as soon as we landed), I preordered a high back booster seat at Target (5 minutes from the airport) and we picked it up when we landed.  We had friends coming in hours after we left, so we were able to leave the seat for them to use with their child so this worked out really well.  Milana slept almost the entire drive to Cannon Beach, resting her head on the car seat, so it was a good decision. She would have been miserable in the mifold for all that time!

There are lots of hotels to choose from all along the coast however after reading reviews, I decided on the Surfsand Resort in Cannon Beach due to their family friendly atmosphere and it was a great choice.  We had a view of Haystack Rock from our room, which Milana loved! 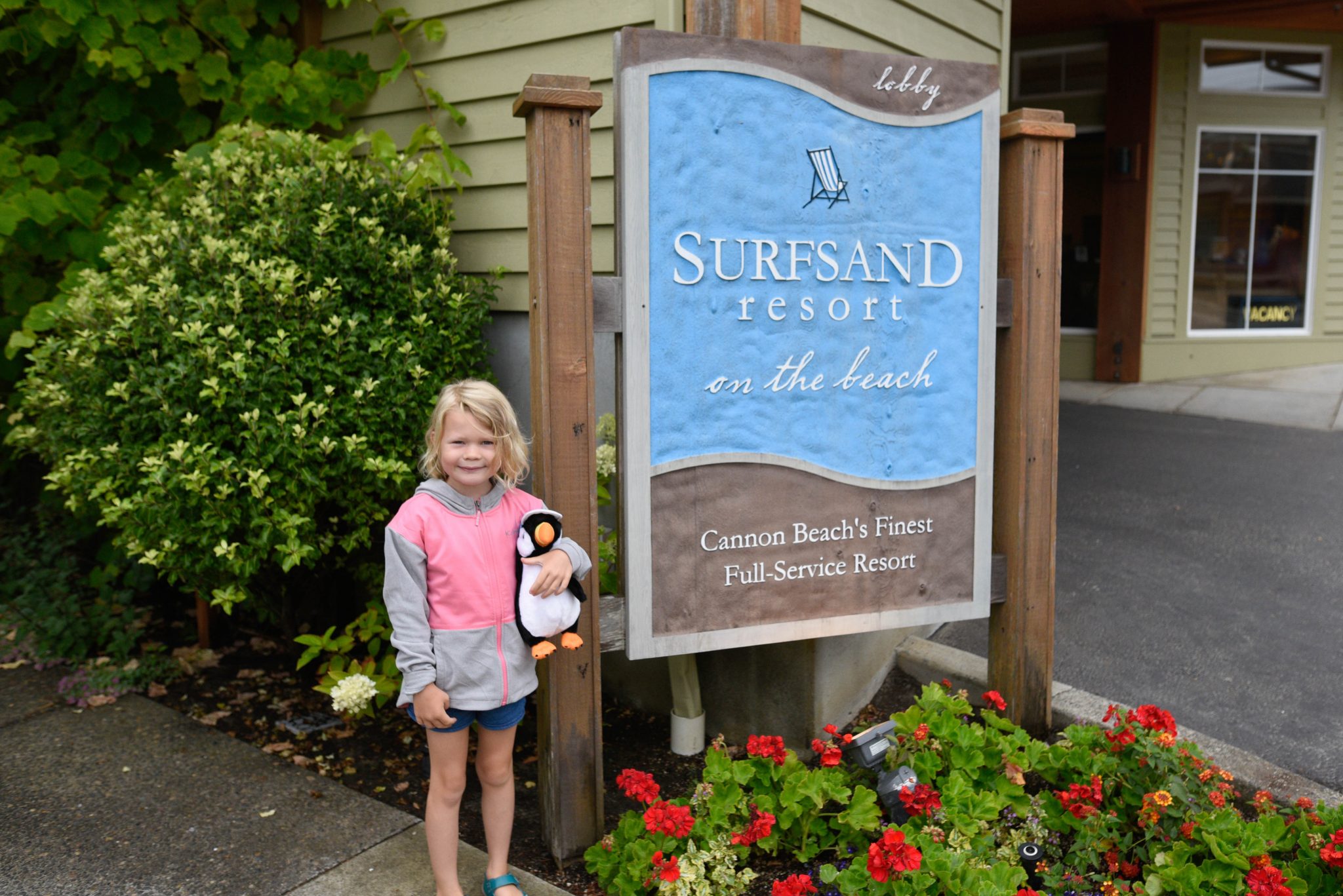 At booking, they ask you the names and ages of the kids traveling with you and leave a personalized note for them in the room, as well as books to read during your stay.  Kids also get a bucket and shovel at check in, which you can bring home or leave in the bin near the beach for others to enjoy after you leave.

The resort had lots of family activities throughout the day.  Cookies in the lobby in the afternoon were always a hit, with some of the best cookies we’ve ever had! They also give you a list of games and dvds you can borrow from the lobby to watch in your room, which we did one evening.  Each room also has kid-sized robes to use on the beach or at their indoor pool. 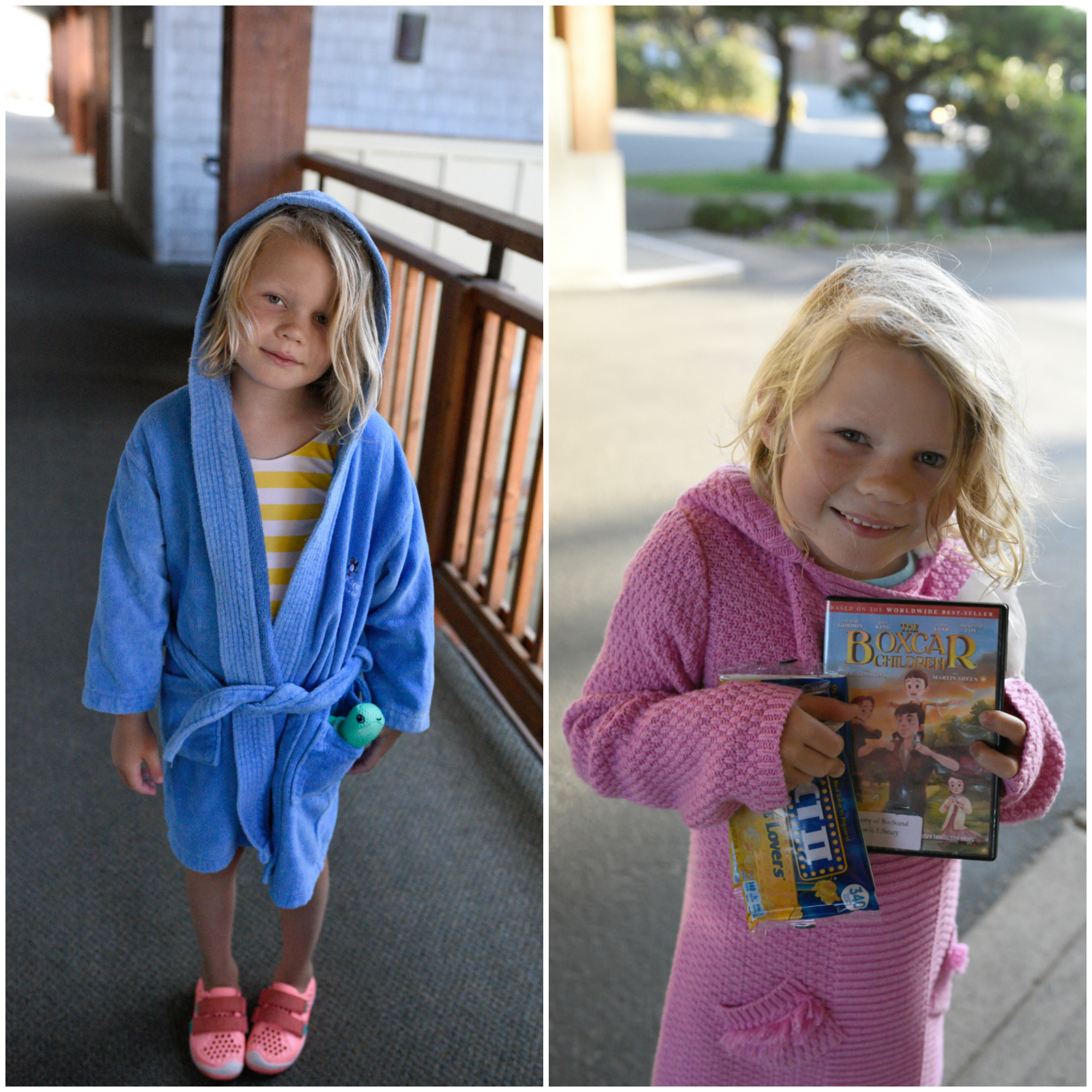 The beach area around this hotel is super cute!  If you wander around, you’ll find a hidden hammock and a little area to explore among trees and seagrass.  There’s also lots of beach toys you can borrow, so you don’t have to bring your own. On different nights, they have different activities on the beach.  On Sunday, they do a hot dog roast which was a popular event! Free hot dogs followed by s’mores, what kid wouldn’t like that? 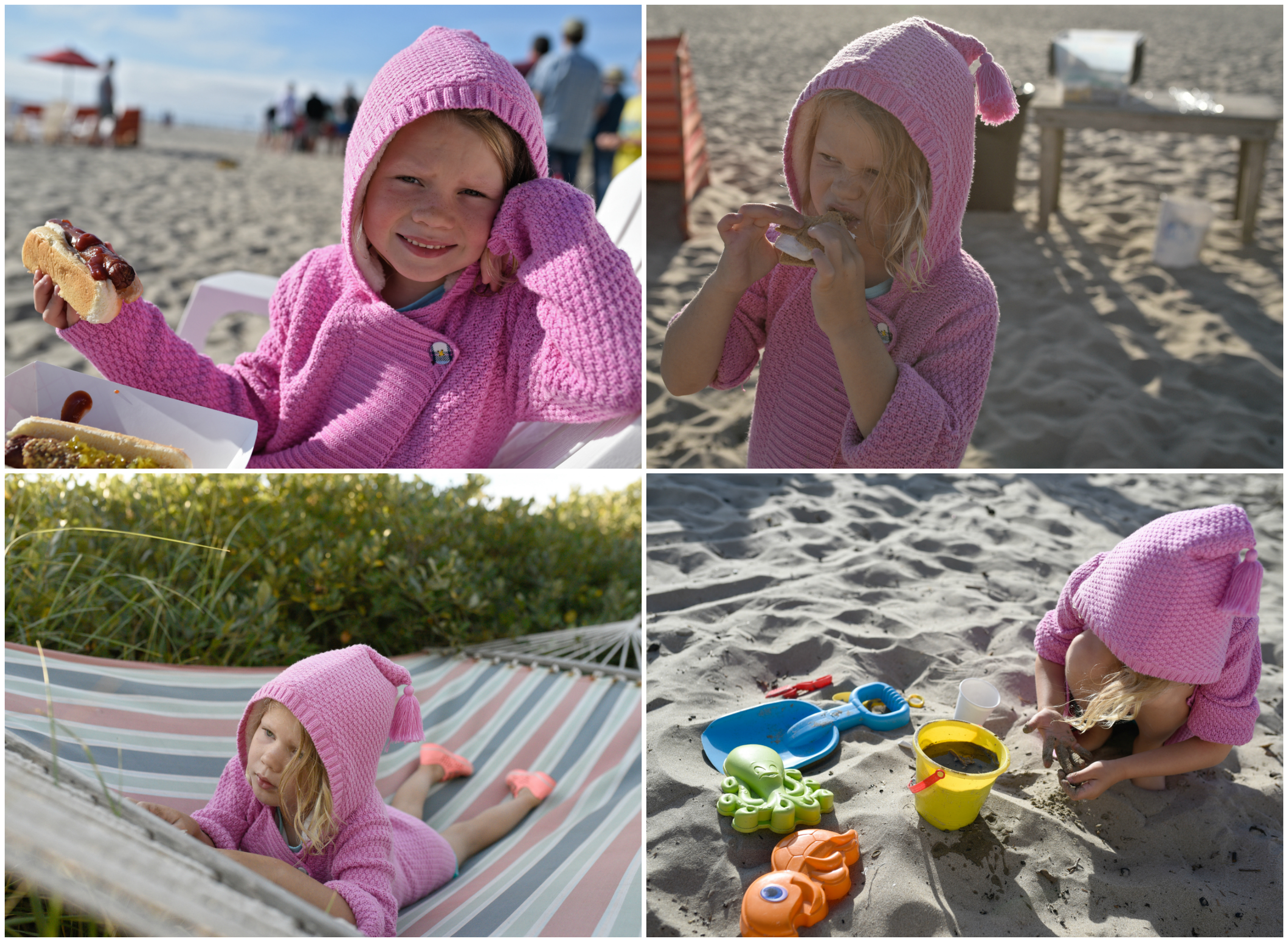 The majority of our time was spent in Cannon Beach, playing on the beach in front of the hotel.  The beach here is beautiful, with the famous Haystack Rock in the background.  The hotel provides chairs, umbrellas, etc. so you don’t have to bring anything with you! 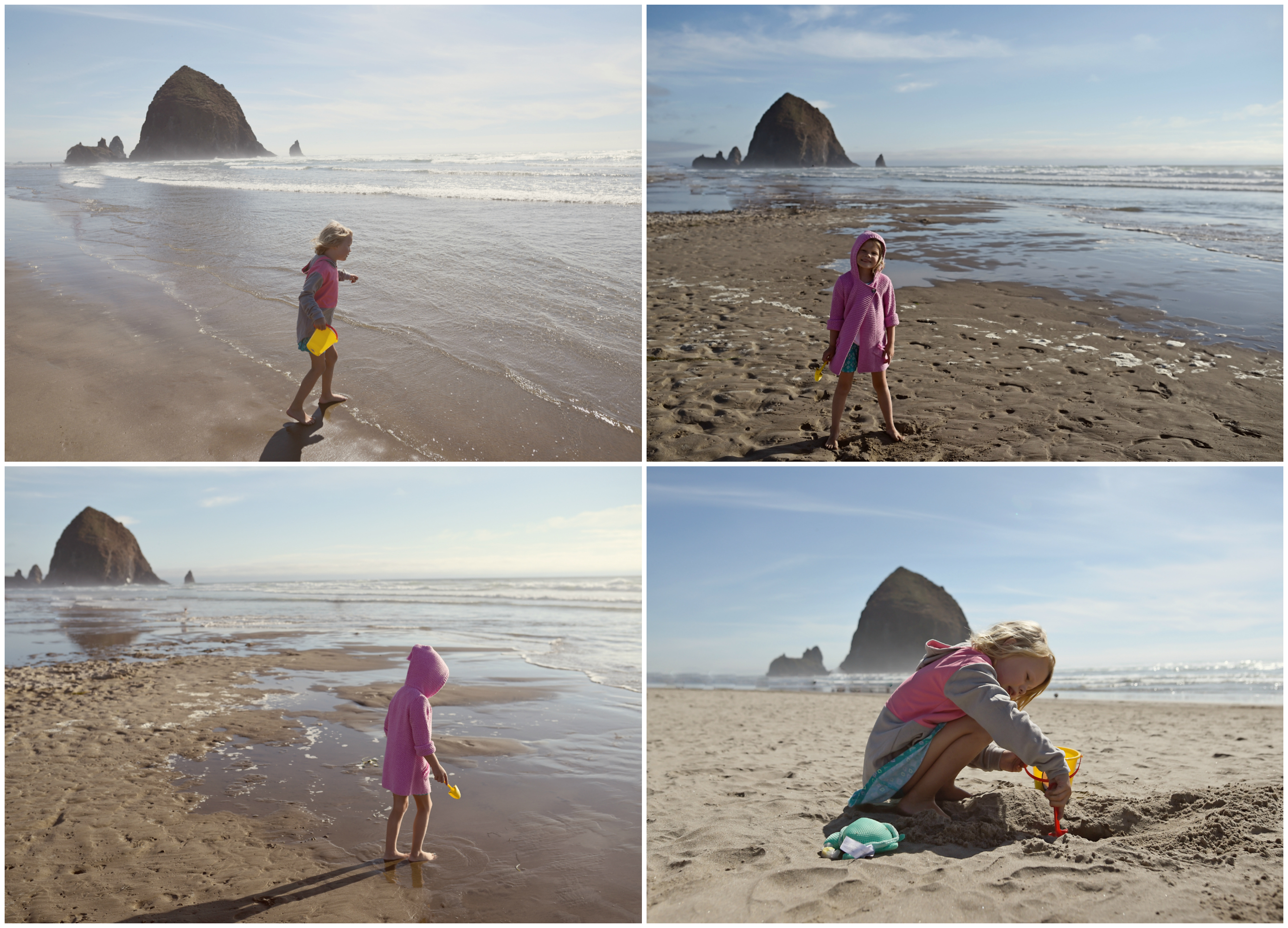 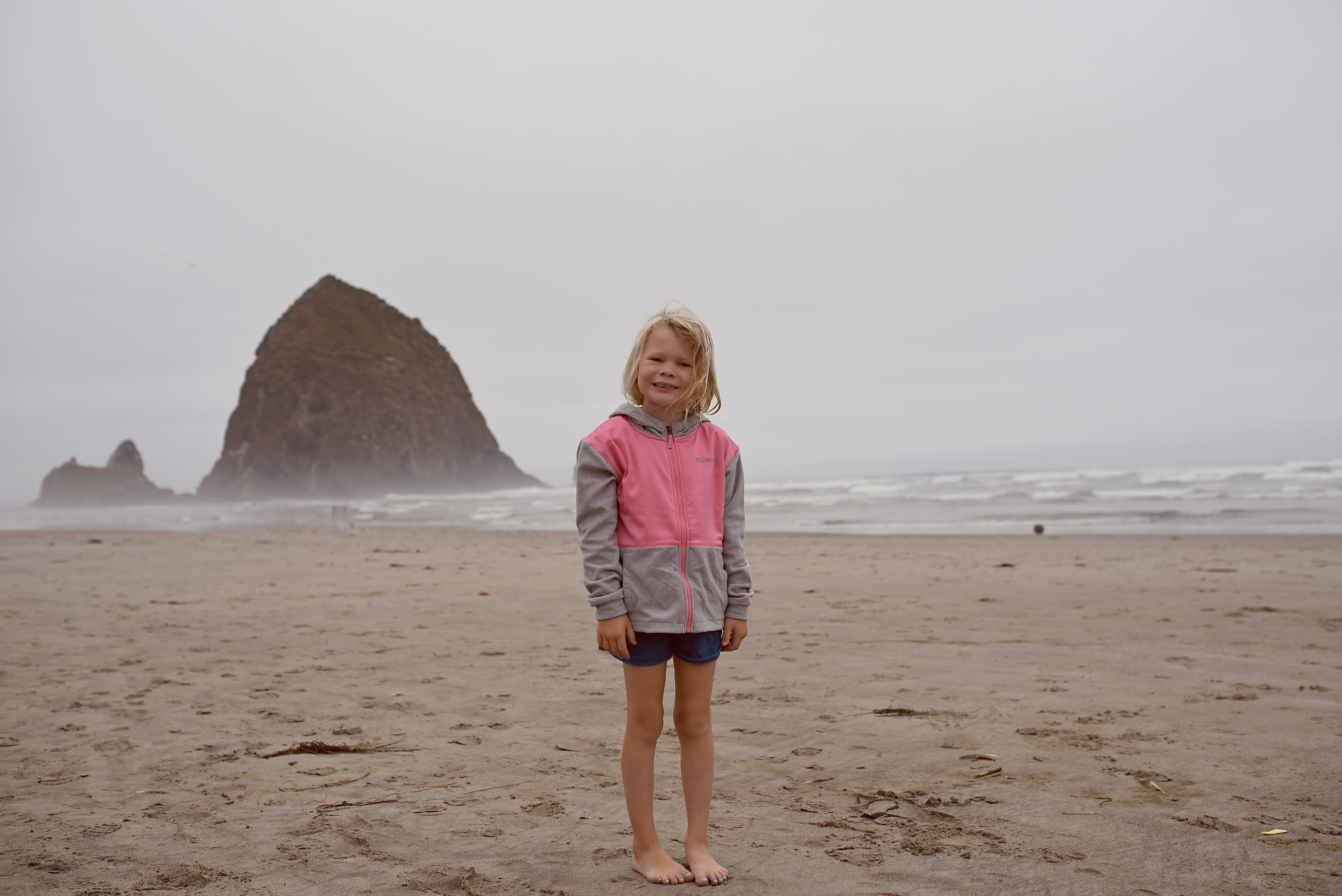 We also walked around downtown Cannon Beach, where we had ice cream, visited a candy store and explored a cute little toy shop. 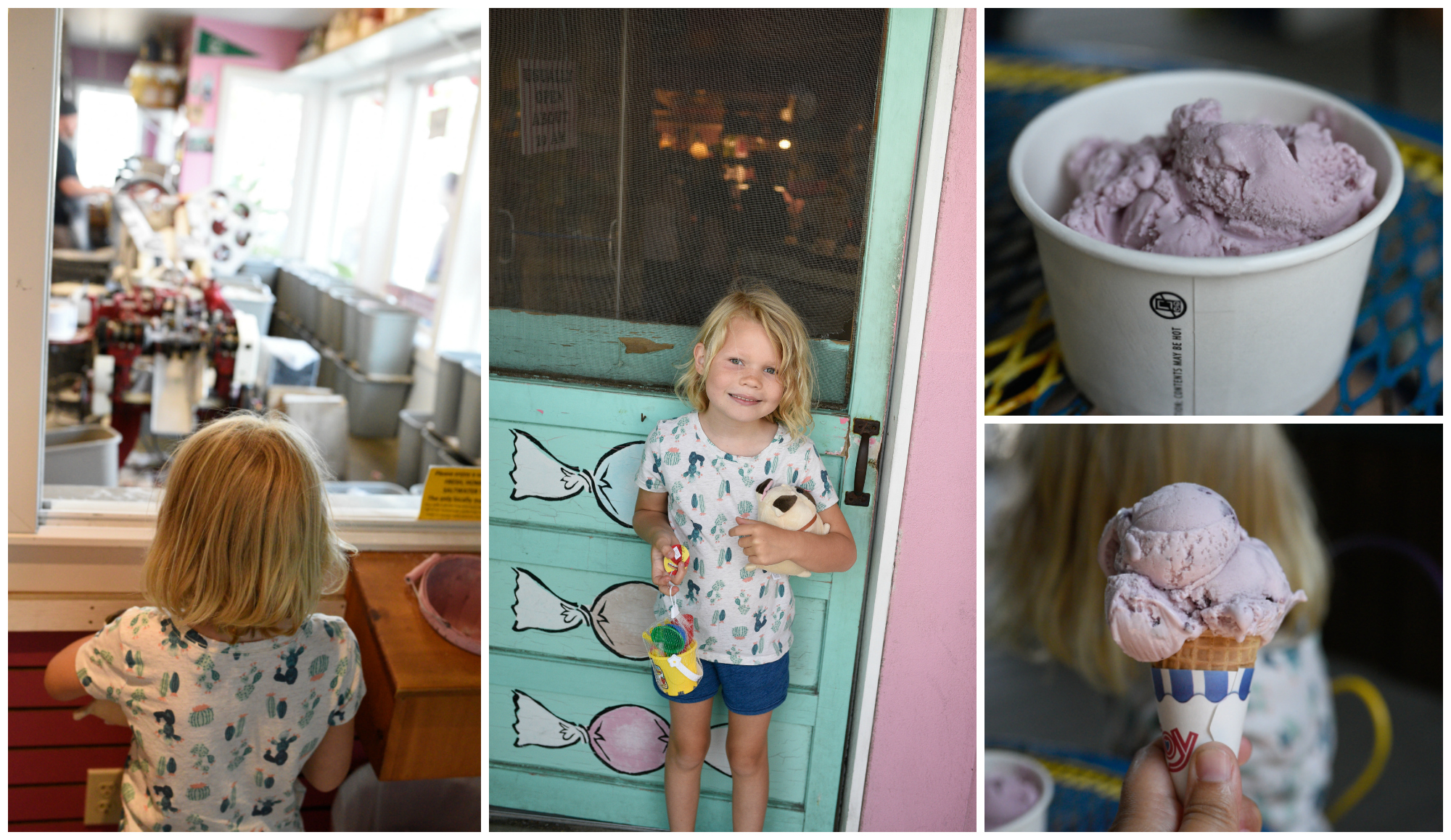 An amazing coffee shop was just a block away from the hotel, Sleepy Monk.  We came here one day so I can have coffee and Milana had a bagel (she loved their bacon and cheese bagels!). 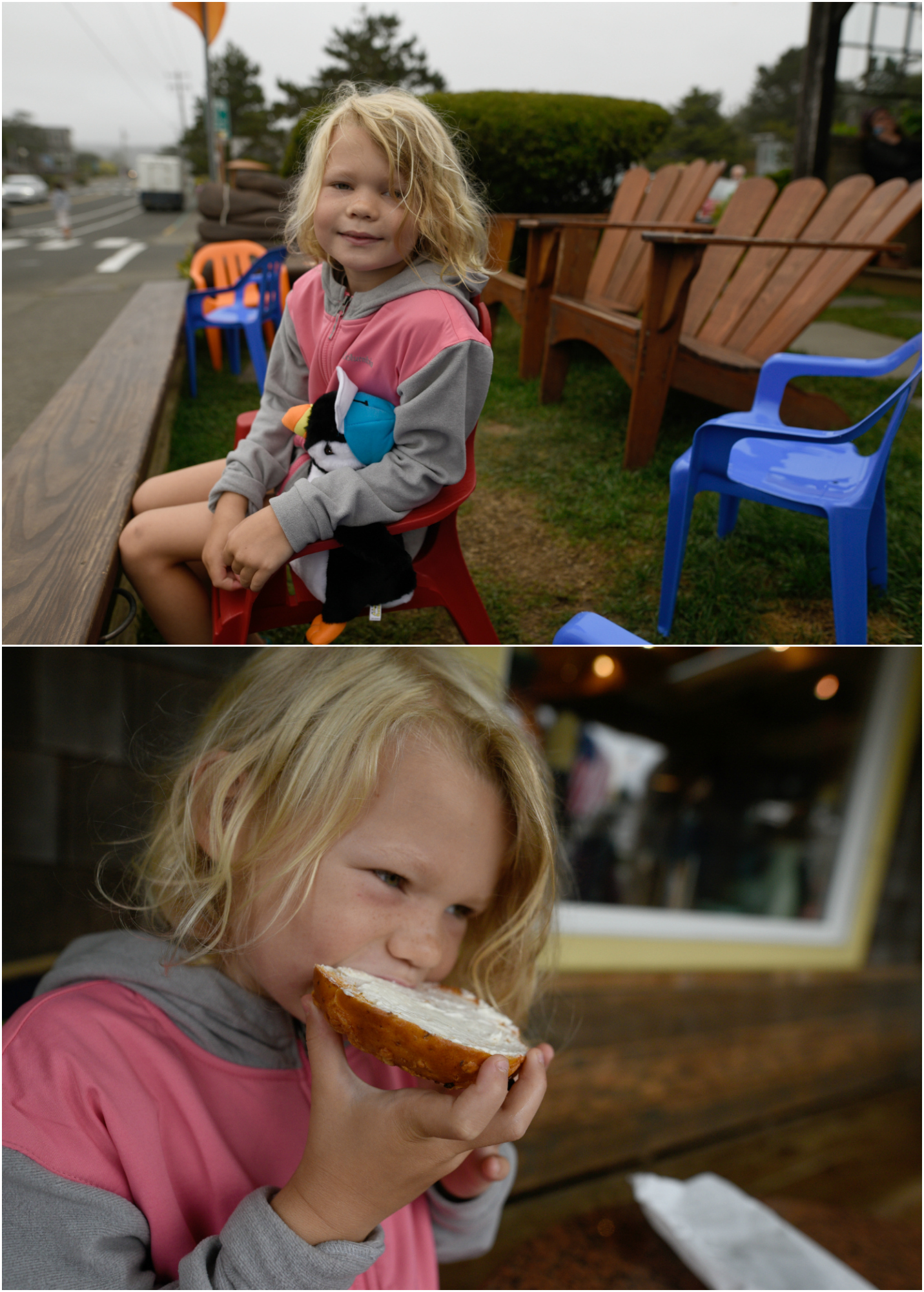 Another place we walked to for breakfast the next day was Pig ‘N Pancake.  This is very popular and you will most likely have to wait for a table, even on a weekday, but it was so worth it!  Their crepes are really good and it’s super family friendly. 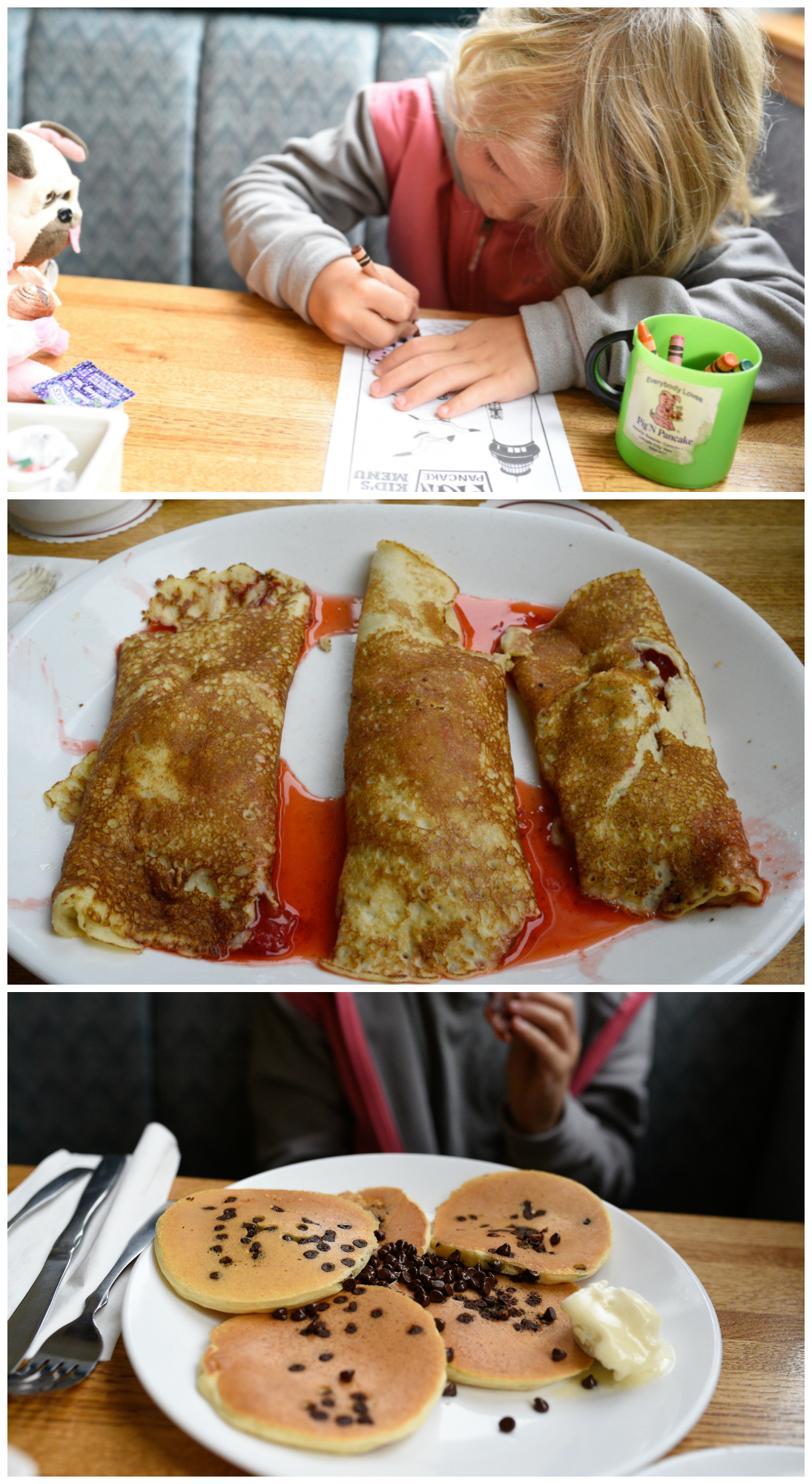 On our last night in Cannon Beach, we had dinner at Pelican Brewing, just two blocks from the hotel. This is another super popular place with a wait, but again it’s super family friendly and definitely worth a visit!  Milana is obsessed with clam chowder and ate quite a bit on our trip! 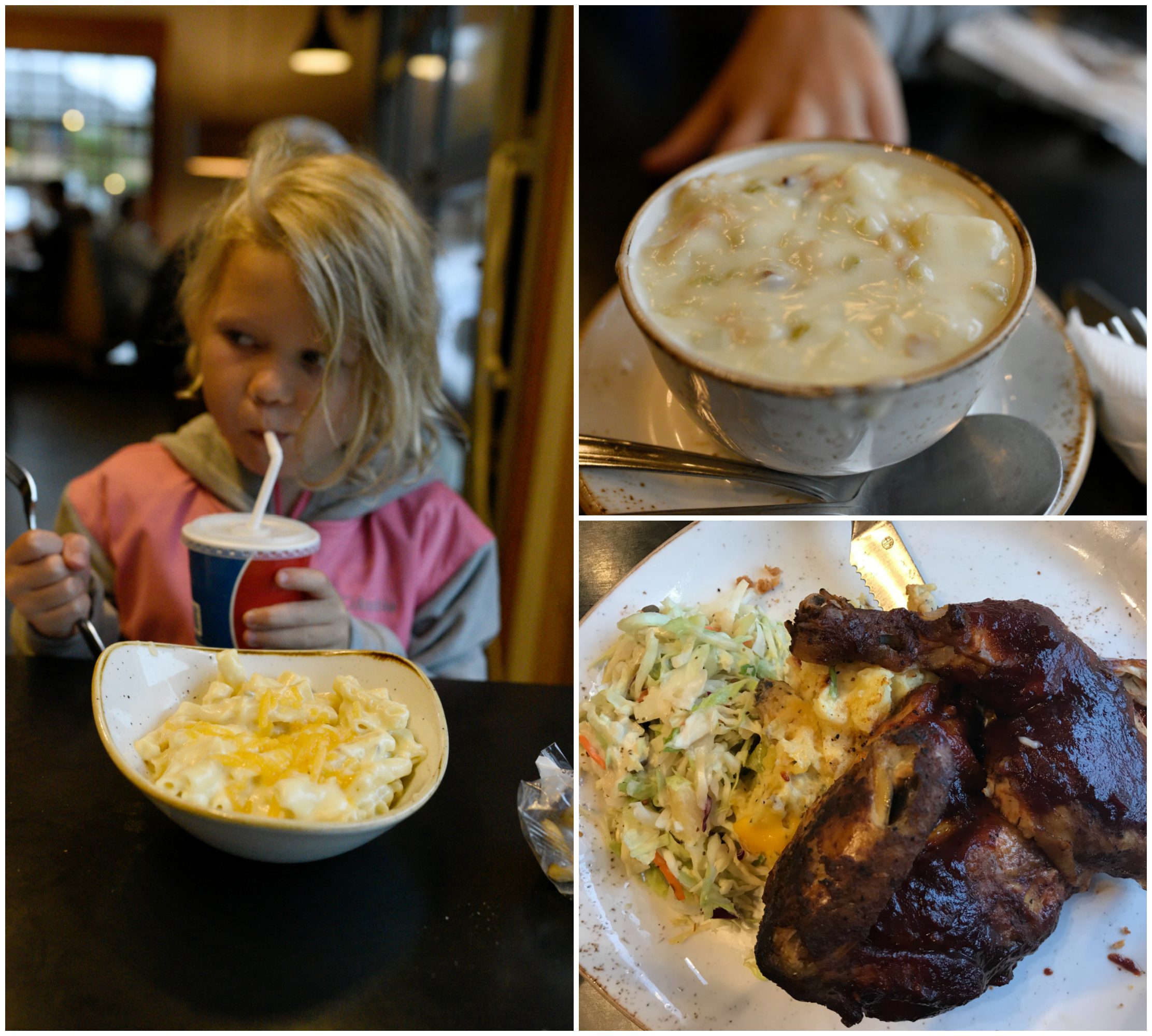 On our of our days in Cannon Beach, we drove the 15 minutes north to Seaside, a cute little community by the beach.  Seaside is another family friendly destination, with lots for kids and families to do. 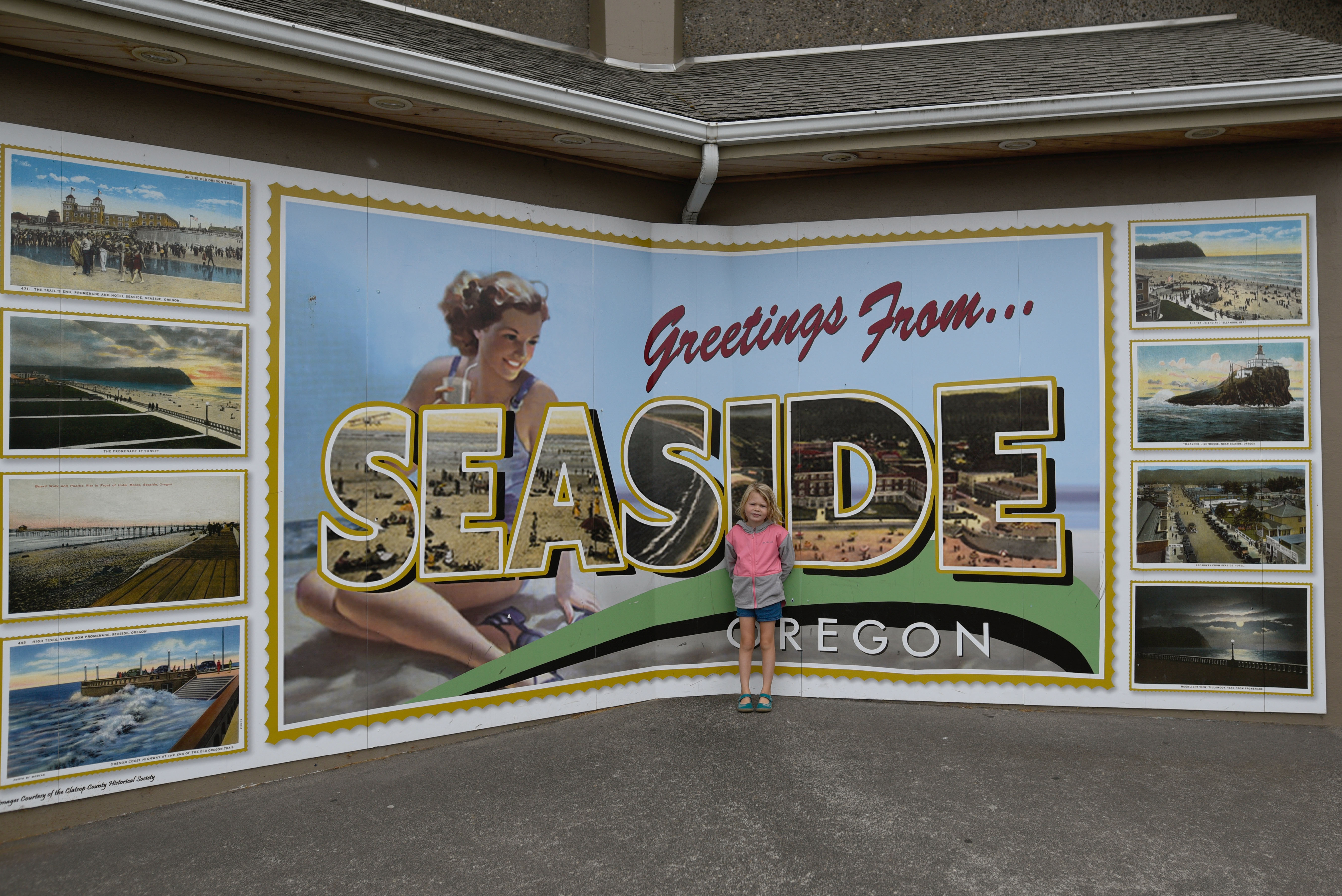 We stopped at the Seaside Carousel Mall to ride the famous carousel.  This carousel has non traditional animals to choose from and is pretty fast moving, making it fun even for older kids. 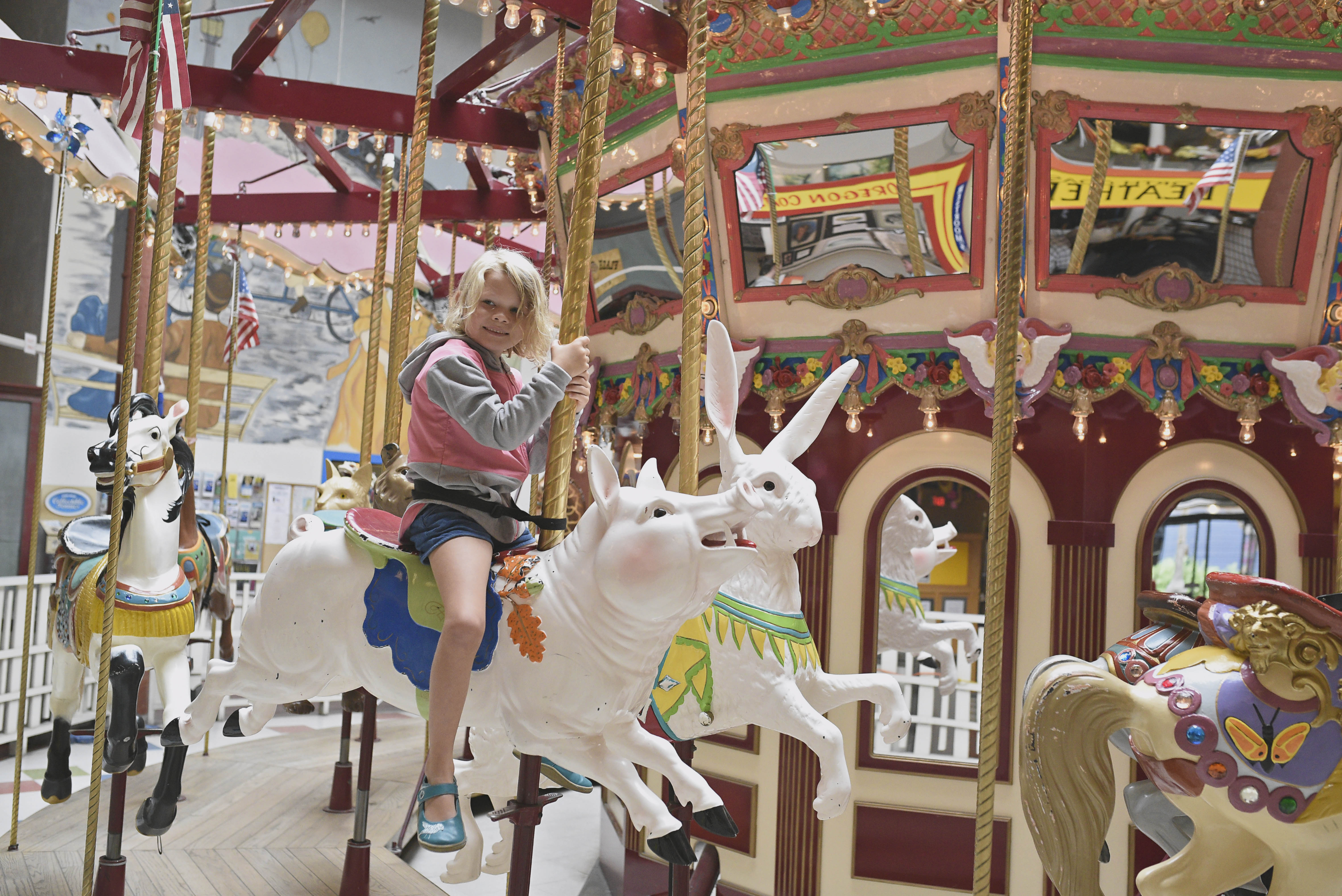 Inside the mall is a cute toy store and just a few stores down, a candy store. 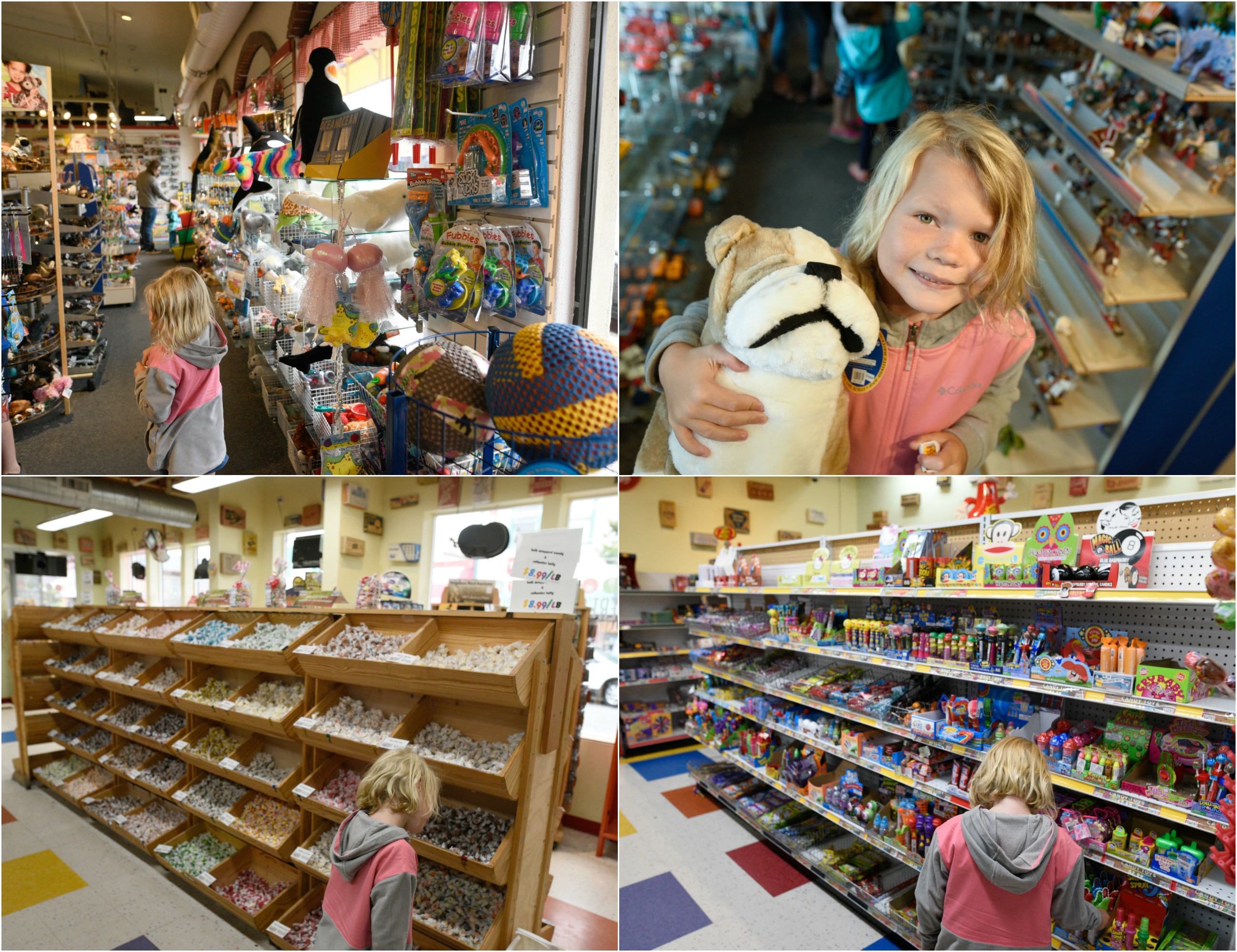 The Funland arcade is also a popular draw for families. We aren’t really arcade people, but we did play a couple of games, spending a grand total of $4 and winning on our first try!

The downtown area is really cute to walk around in, with lots of stores and restaurants to explore.

If you walk towards the beach and the (concrete) boardwalk, you will see the small aquarium.  Admission is really cheap and it was a good way to spend some time.  You can buy raw fish up front and feed the seals, this was the highlight of the aquarium! 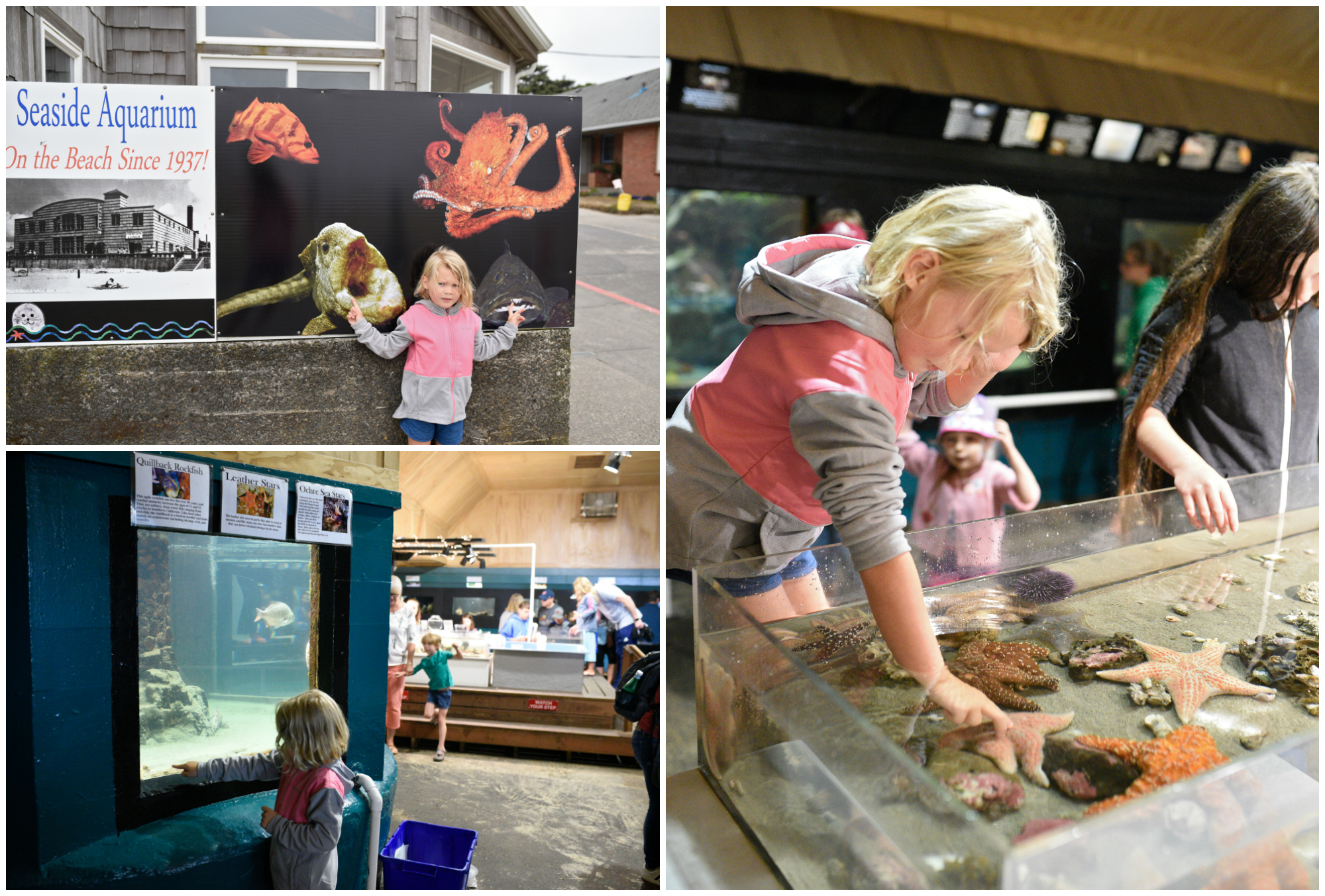 The beach is really cute here too.  Not just your typical flat beach but cute foliage all around. 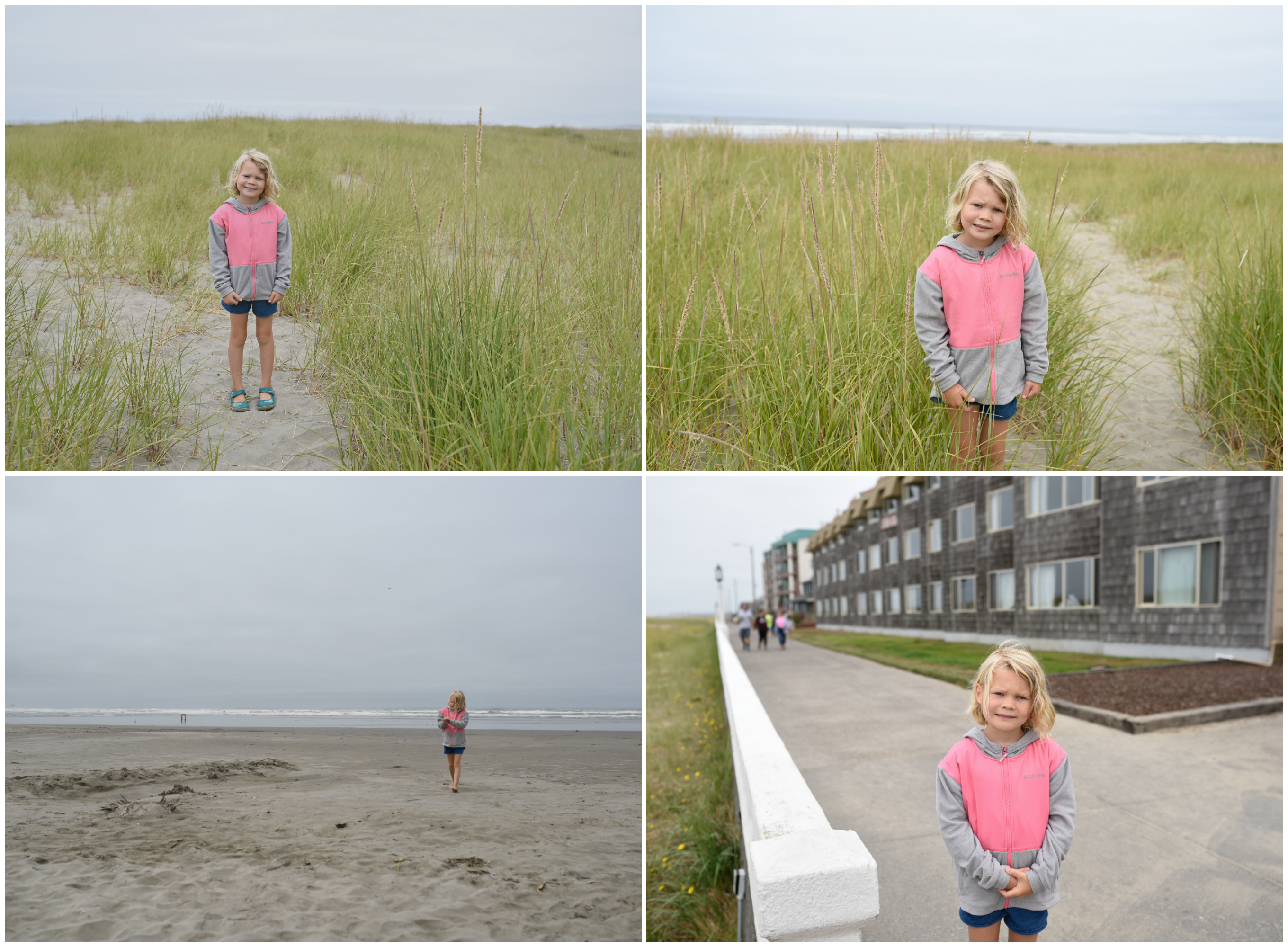 Since we were only here for a few hours, we didn’t eat much.  We did have lunch at Tom’s, since Milana has been asking for clam chowder and fish and chips. 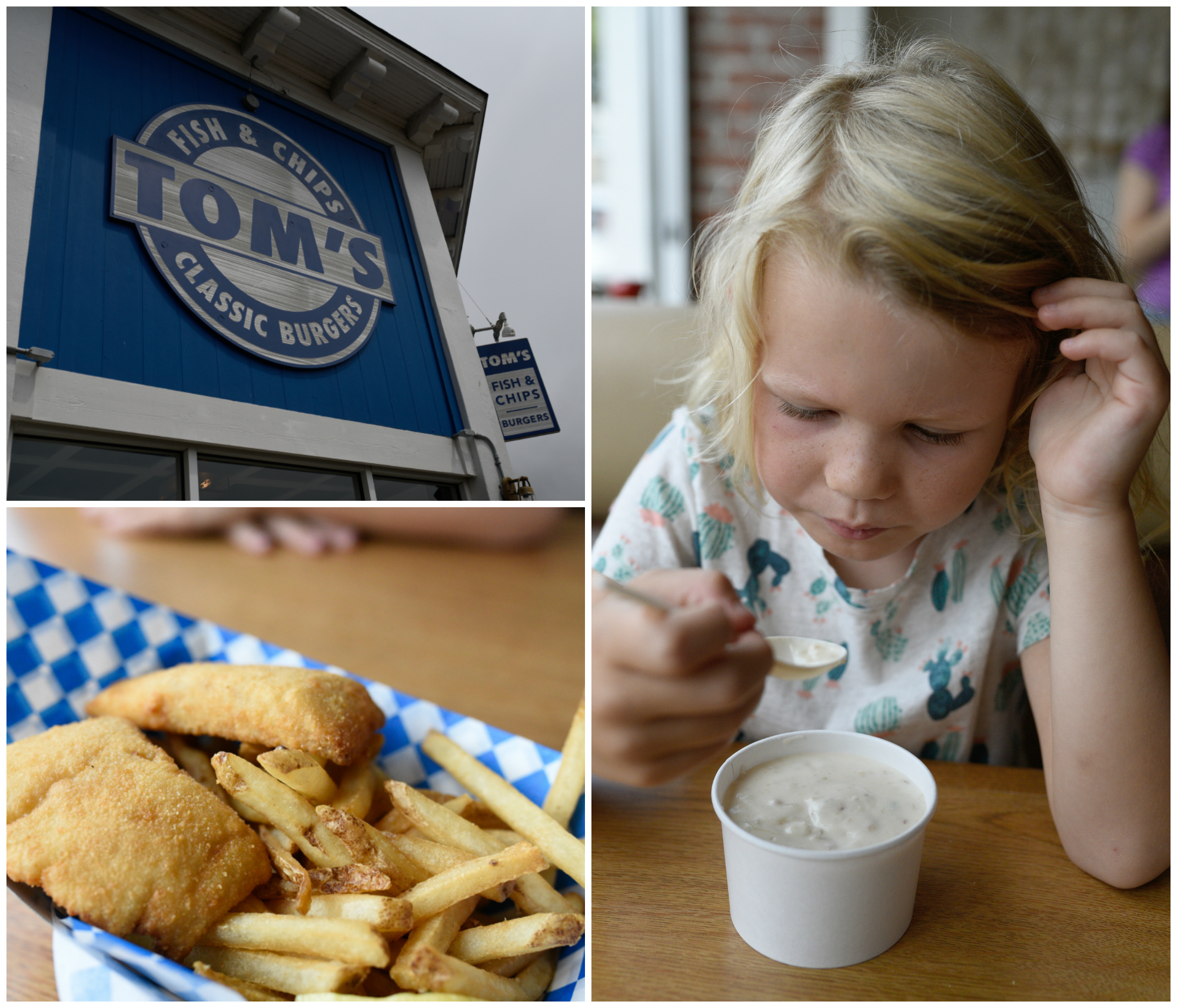 Driving back to Cannon Beach, we stopped at a cute little shop for some pie, halfway between the two cities. 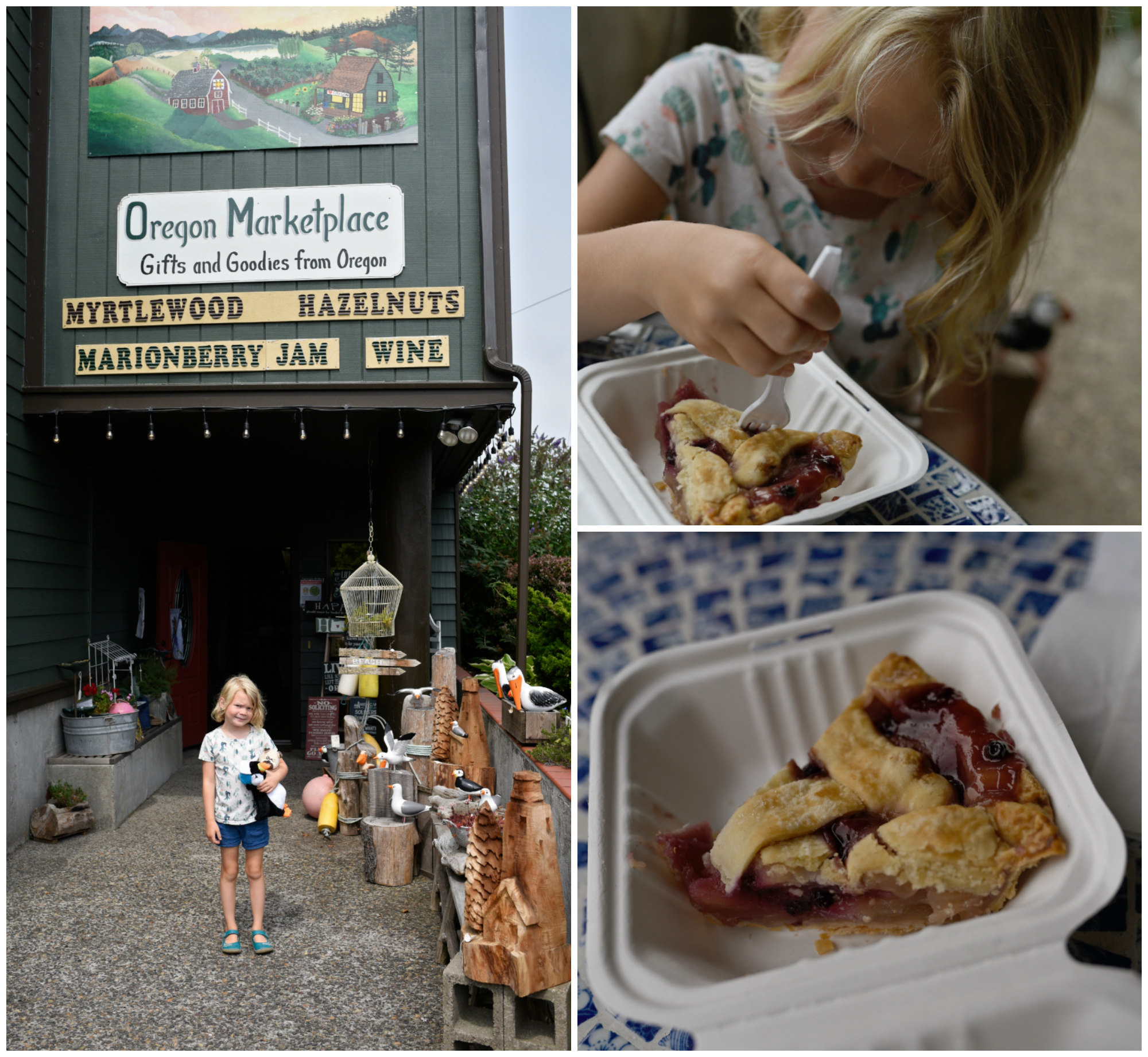 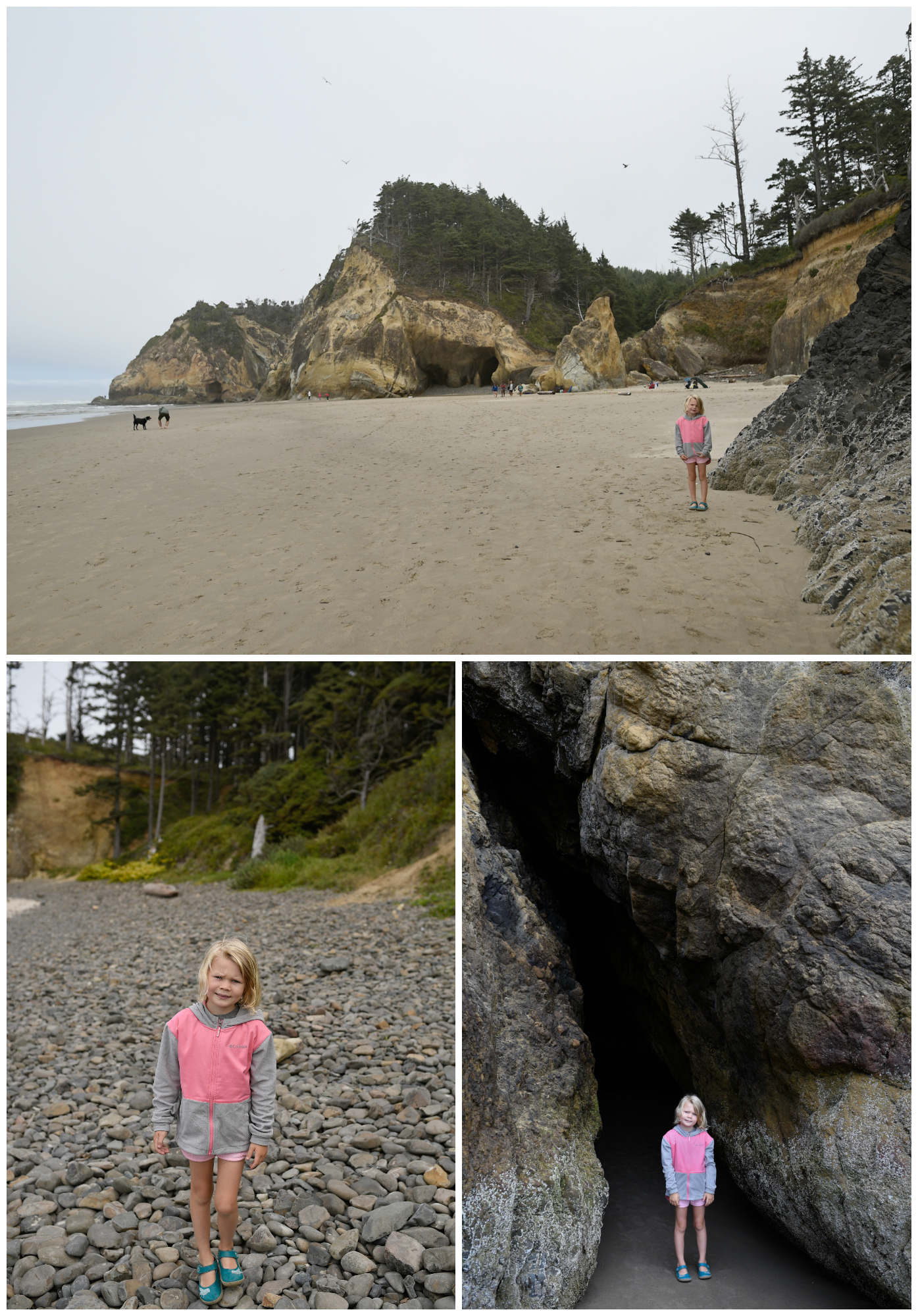 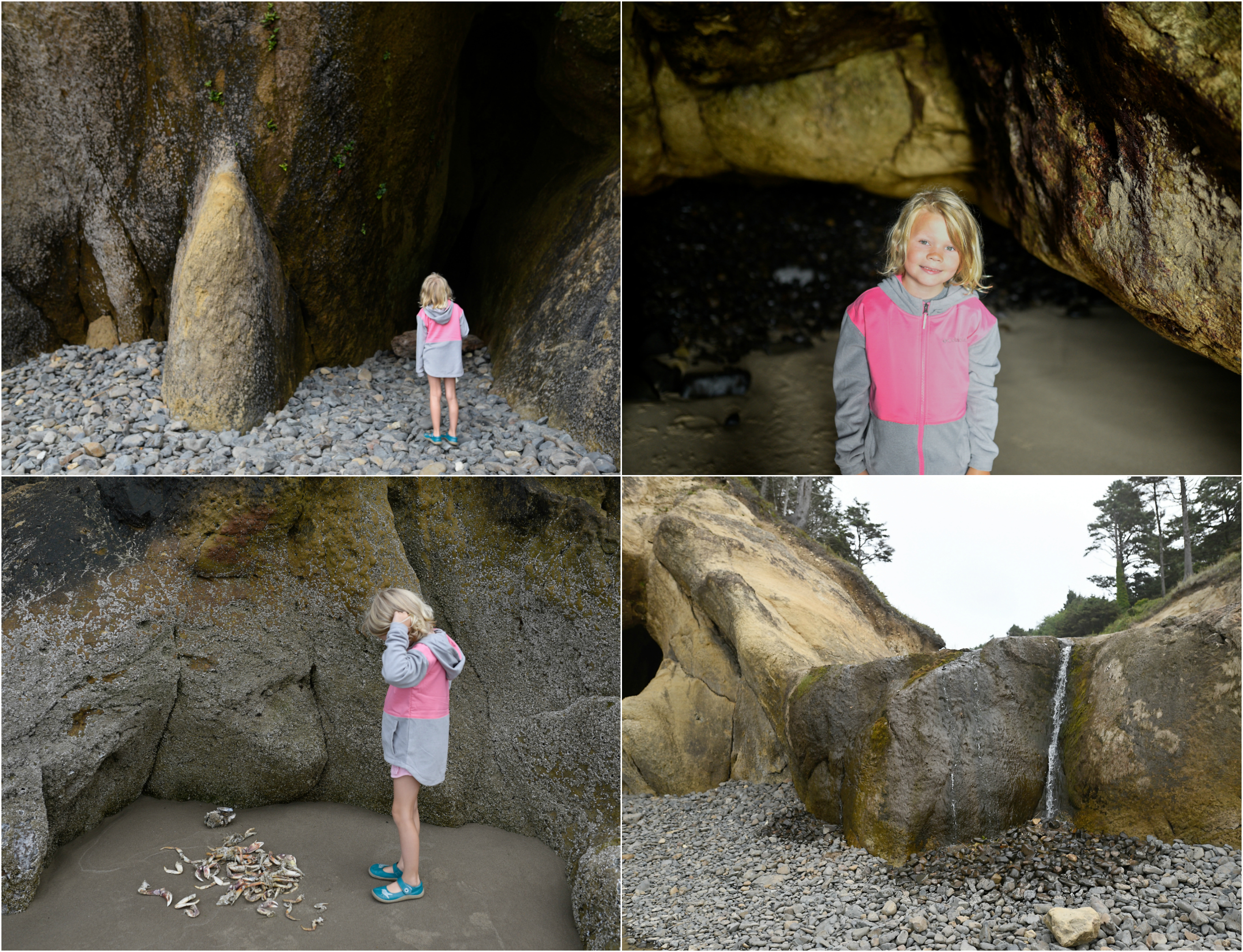 The next city we stopped in was Manzanita.  We came here mainly so she can stretch her legs and found a little playground at Manzanita City Park.  The playground wasn’t much, however she quickly made a friend like she always does and a quick pit stop turned into 1.5 hours!

The downtown here is another cute little seaside town, and we had ice cream and explored another toy store before leaving.  Milana has commented that she’s never seen so many toy stores anywhere as we did on this trip! Every city has an independent toy store, stocked with some awesome items.  This one had one of the best game selections I’ve seen! Not your typical Target games, but the awesome, educational card games and board games that we use in our worldschooling/gameschooling adventure. We found one we don’t yet have and bought it to play on the rest of our trip. 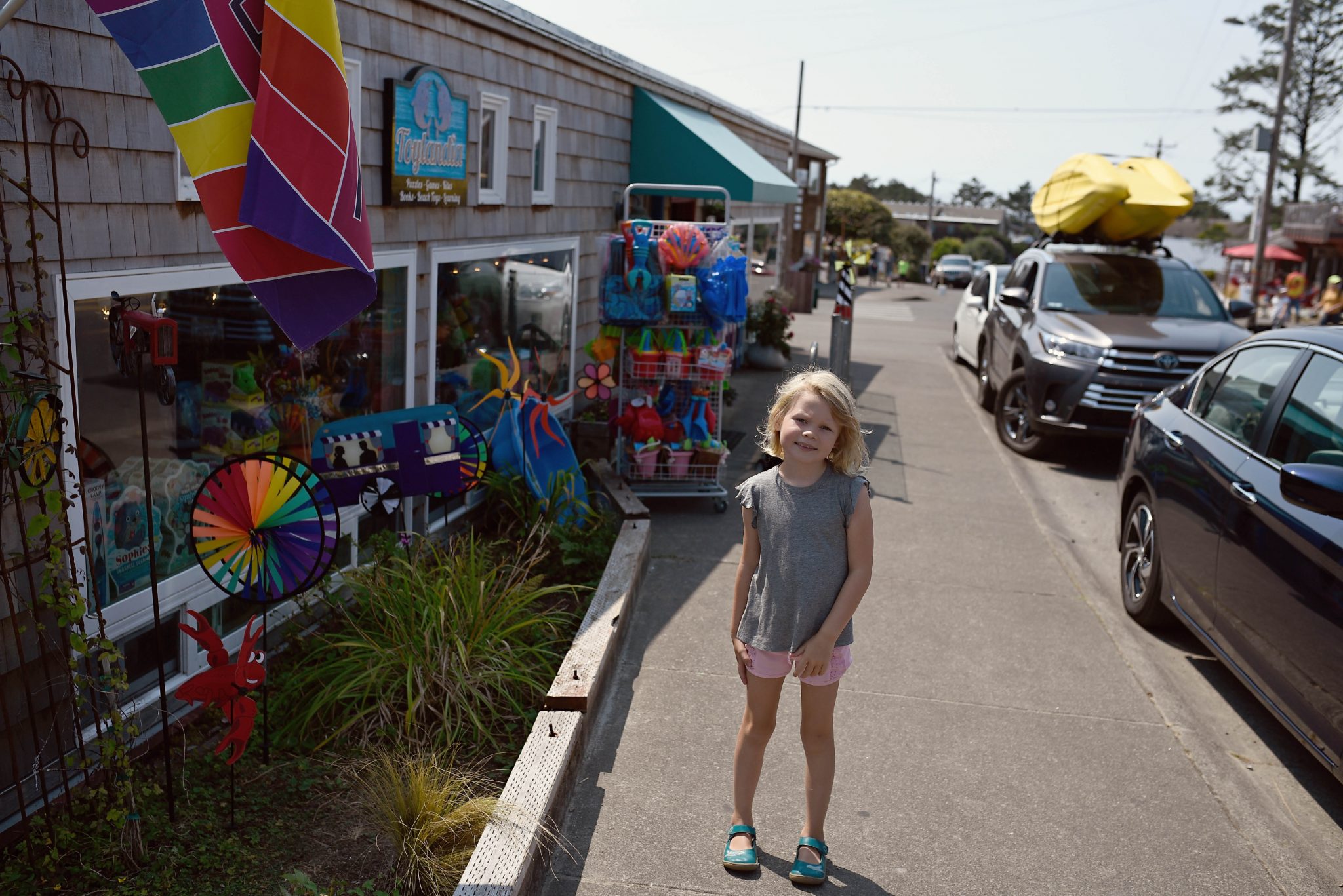 Our last stop down the coast was Tillamook.  We were heading to our farmhouse Airbnb, which was over an hour inland, so we didn’t want to go any more South.  The new visitors center just reopened, so we were lucky to see it while it was still brand new!  Milana loves all cheese, the stinkier the better, so this was a huge draw for her. She loved seeing how the cheese is made and especially loved sampling all the different ones! 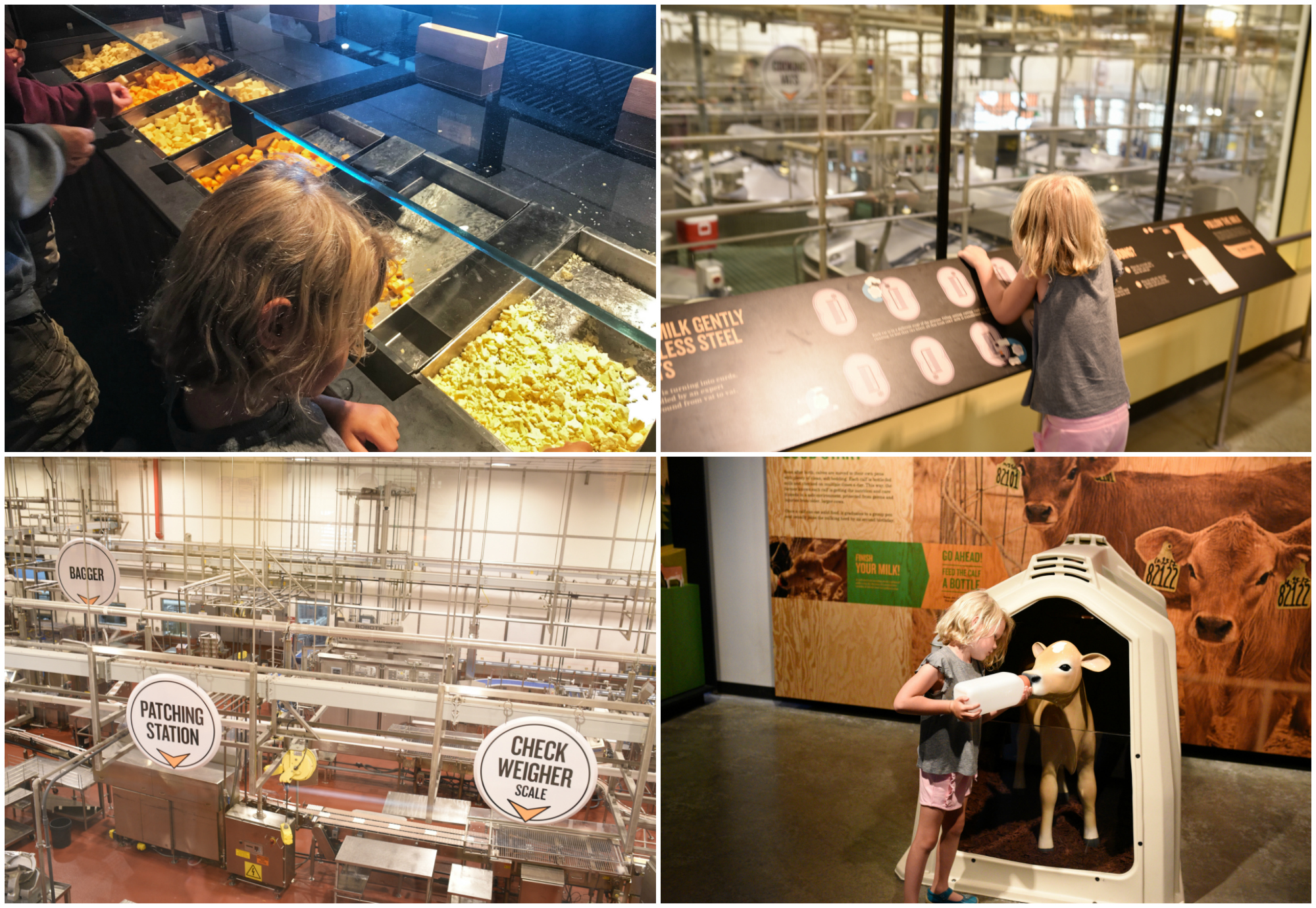 We had lunch here and the food was really good! I mean, everything is covered in cheese so it’s hard to mess that up!  Milana said her grilled cheese was the best she’s ever had. Of course we got some clam chowder to, this girl is addicted to it! I’ve heard of this place getting crowded especially in the summer, however by the time we arrived, it was already 2pm and crowds have thinned.  There were no people in line for food and just a few for the cheese tasting so we didn’t experience any lines. I imagine first thing in the morning/around lunch time is when it gets crazy. 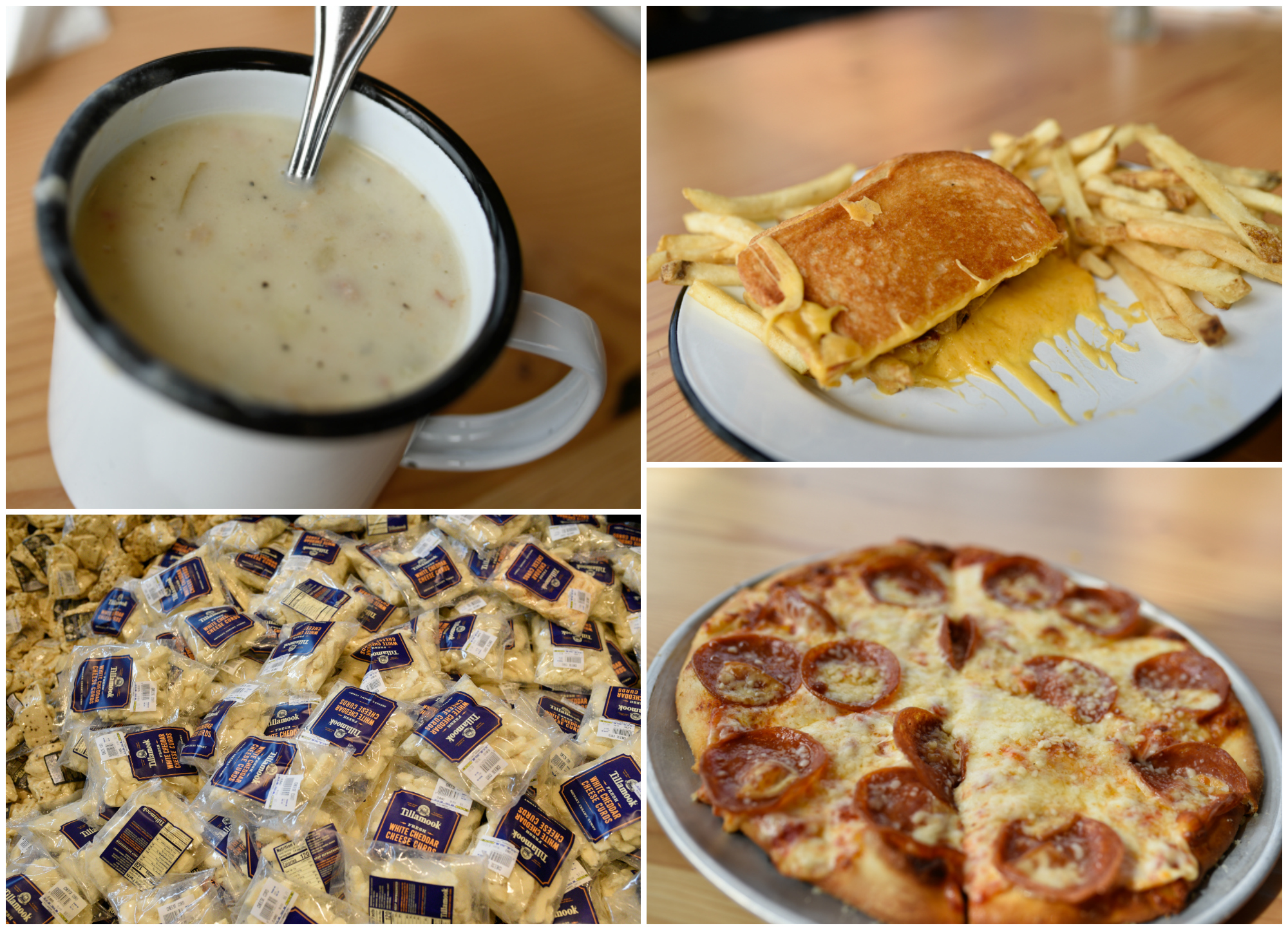 This was an awesome trip and we had a blast exploring all the cute seaside towns. Milana is already planning to come back to see the puffins!  We just might drive down the entire coast into CA and home next time.  We managed to do all this in just 2.5 days, imagine what a week would do! 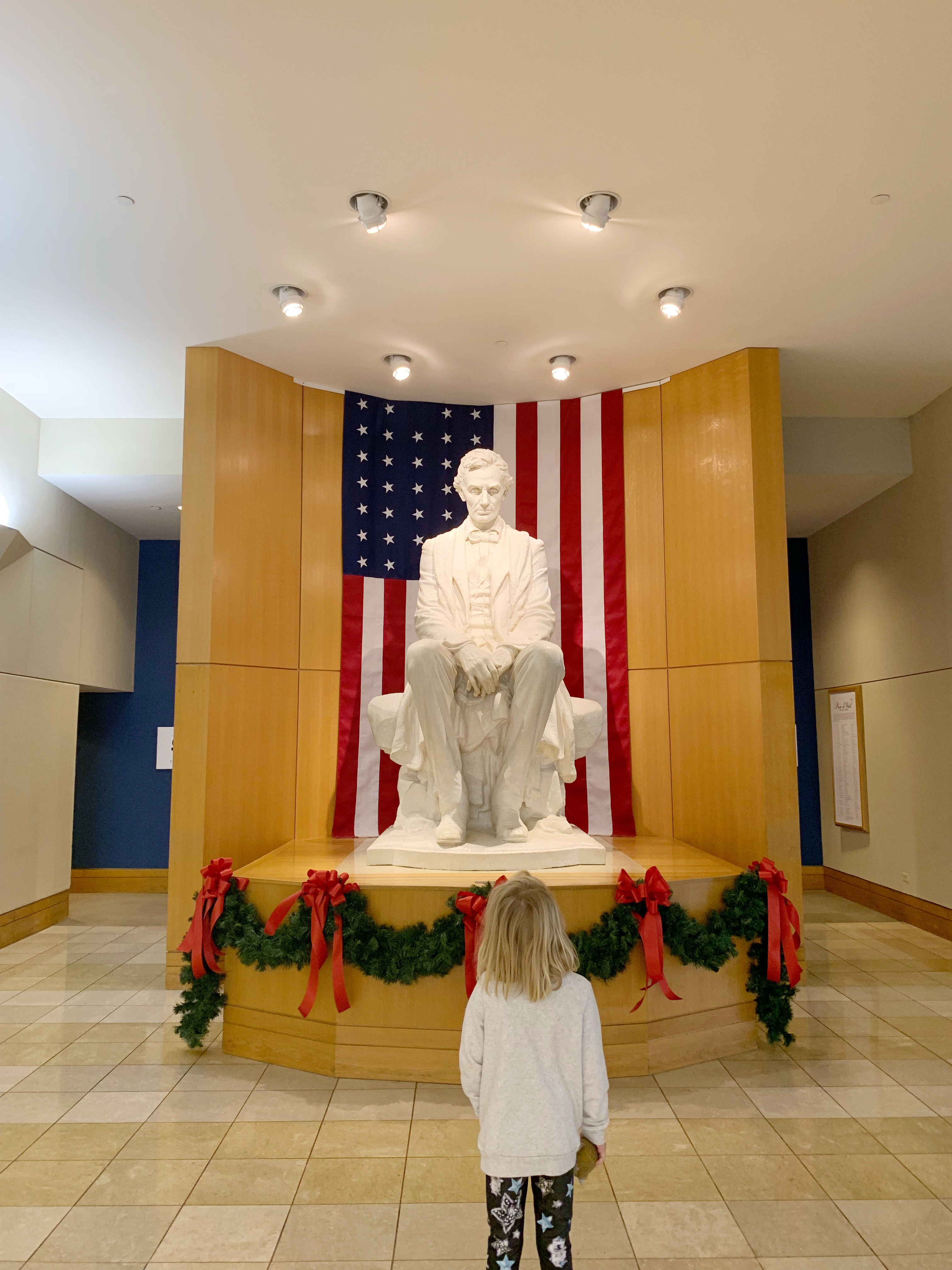 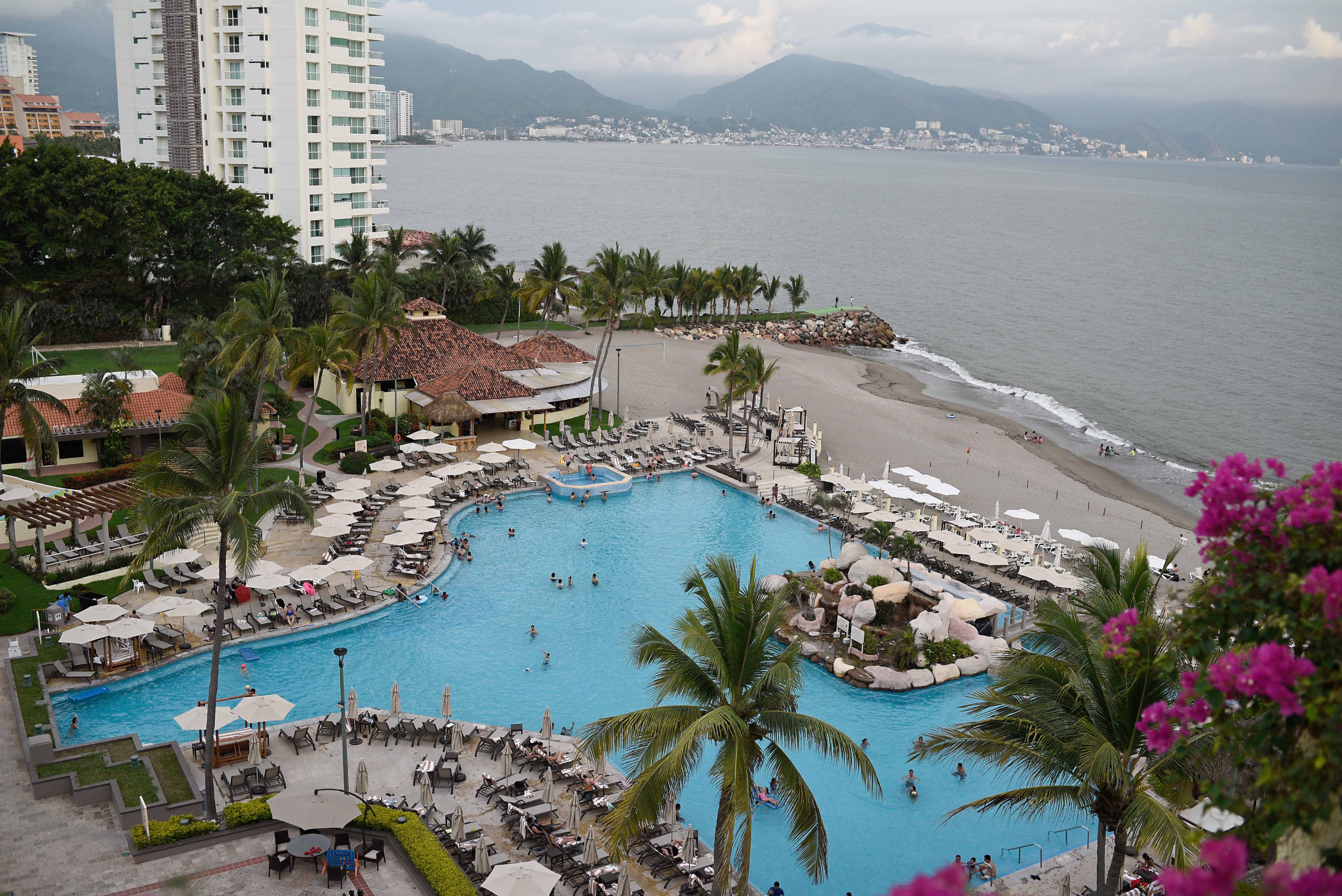